Extreme tourism has its risks, and its rewards.

Andrew Drury has been shot at by ISIS, cornered by al Shabaab and threatened with death by the Ku Klux Klan - all while on vacation.

For 22 years he's been going on "different" kinds of holidays, he tells SBS. The British small-business owner is somewhat addicted to vacationing in global trouble-spots.

The list of countries he’s visited includes Syria, Iraq, the Democratic Republic of Congo, Afghanistan and North Korea, among others.

Fancy a Holiday with me to the front line. Under attack from ISIS pic.twitter.com/P5tEuFd1Ze

Asked why he does it, he said he's not entirely sure.

He said he's partly driven by wanting to go beyond the headlines and news reports. "The snippets that you get are generally not accurate, I like seeing it for myself," he said.

According to the Department of Foreign Affairs and Trade, which offers travel advice based on intelligence reports and threat assessments through its Smart Traveler website, there are 12 countries you shouldn’t travel to.

The nations awarded the red ‘Do Not Travel’ sign are all in Africa or the Middle East.

But for those willing to ignore official advice – seeking thrills, danger and bragging rights – there are a range of unconventional tour operators who cater for the niche market of extreme risk-takers.

Warzone Tours, which markets itself as one of the more extreme operators, was set up by former security professional Rick Sweeney in 2008.

“Our tours are safe and customised to your vision,” their website reads. “With very few limitations.”

Their advertising plays on the thrill of risk and danger. Sounds of gunfire, jets and explosions are embedded on their website. The background is an image of a burnt out car.

With tours to Sudan, Somalia and Iraq, arranging security is the biggest cost. A custom trip to Baghdad might cost upwards of $40,000.

Other tour operators shy away from selling their services as ‘warzone tourism.’

Political Tours, set up by a former New York Times correspondent, says it’s the only travel company to specialise in news and current affairs.

“You will meet with over a dozen speakers on any one of our tours and you’ll be accompanied by some of the best analysts and experts in their fields,” their website promises. Untamed Borders and Hinterland Travel focus on cultural experiences and stunning landscapes. Both spruik the spectacular untamed wilderness of their alpine Afghanistan tours.

"One of the main reasons that people come on our trips and one of the things we work hard at, is to show the countries we guide in for the multi-faceted, complex places they are rather than show them in sweeping generalisations," James Willcox of Untamed Borders told SBS.

"Very few would come because of bragging rights in my opinion," he said. "Most people are not impressed by someone having visited Afghanistan."

But such placid-sounding trips are no less risky. A van full of Western tourists, reportedly on a Hinterland Travel tour, were attacked and shot at by the Taliban earlier this week. Their van was reportedly hit with a rocket propelled grenade.

Five foreign tourists and their Afghan driver were wounded, according to The Guardian.

“That was always going to happen,” Andrew Drury told SBS.

He's familiar with the company and says he isn't impressed, they publish their itineraries online - accessible to anyone.

“There’s rules with doing these war tours," he said, "you should never tell anyone where you're going."

Asked if he had any advice for would be adventurers thinking of following in his footsteps, Andrew Drury is blunt - don't go.

“It can go one of either two ways – you’ll either get too scared and wish you’d never went. You'll freeze somewhere you really can't afford to freeze," he said.

“Or you’ll end up addicted to it like I’ve been.” 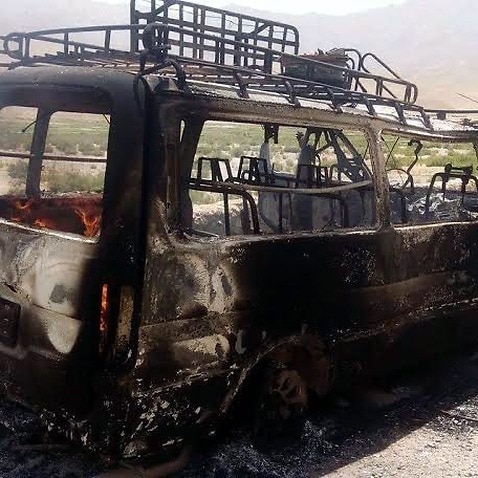