Yasin and Shahab were welcomed into Austria with open arms. Now, a change of government - which has praised Australia’s strict immigration policies - could deport them.

At first glance, there is little to betray Yasin’s anxiety. He is smiling, soft-spoken and friendly, neatly groomed in a white pullover and carefully pressed jeans. But as the 27-year-old Afghan begins to speak, his body tenses and his voice flattens, as if one small expression of emotion will trigger the floodgates of fear.

“I am so sad, I don’t know what will happen to me now,” he tells SBS News. “I can’t go back to Afghanistan.”

Just last month, Yasin learned his application for asylum in Austria had been rejected, for the second time. He has been in Vienna for almost three years, and now he has three weeks to convince the authorities to allow him to remain. If he can’t, he will be deported, back to his homeland, back to a country ravaged by war, violence and terror. A country far more dangerous now than it was when he left.

His lawyer has told him there is almost zero chance the asylum court will change its mind. Yasin, with fellow refugee Farhad, has been in Vienna for nearly three years.
Kim Traill

Yasin is one of 90,000 refugees who entered Austria in 2015 fleeing war in Syria, Afghanistan and Iraq, an influx totalling one per cent of the country’s population. Since then, a further 65,000 have sought asylum in the alpine nation.

A rally in support of refugees in Vienna in 2015.
Kim Traill

Two years later, 60 per cent of Austria’s population voted in a right-wing coalition promising tighter border controls and a crackdown on immigration.

“When I came, people were very welcoming. Now I have many Austrian friends here,” Yasin said. “I don’t know why I received a negative decision. I don’t know why the politics is like this.”

When I came, people were very welcoming. Now ... I don’t know why the politics is like this.

Austria’s new chancellor, smart-suited 32-year-old Sebastian Kurz, has repeatedly praised Australia’s immigration policy, suggesting it is a model Europe could and should follow. At a recent summit of EU leaders in Salzburg hosted by Kurz - who also currently holds the presidency of the European Council - the securing of Europe’s borders was top of the agenda. Yasin’s disappointment, and dread, is palpable. In Ghazni, 150km southwest of Kabul, he once worked as a journalist, a dangerous job in his Taliban-controlled hometown. On hearing Europe had opened its borders in mid-2015, he seized the moment, walking for seven months all the way to Vienna. He has been studying German and video-journalism, living in a cramped hostel with 200 other asylum seekers, and waiting. Waiting for a piece of paper that would grant him peace of mind. Waiting for a chance to build a life without the constant threat of death. Waiting for a document he now fears he will never see. Europe is sharply divided over the refugee issue. As well as Austria, Italy, Hungary, Poland and Scandinavia all advocate a hardline approach and are pushing for the establishment of processing centres outside Europe.

Defence spokesman of Austria’s Freedom Party, Reinhard Bösch, even told journalists recently “Europe should send troops to North Africa to occupy land where asylum seekers could be held before sending them back to their countries of origin”.

Anny Knapp is an expert on asylum law at Asylkoordination, a Vienna-based NGO. Asked about Australia’s offshore detention policy, she said: “it is clear that the Australian model is not a model that should be followed”. 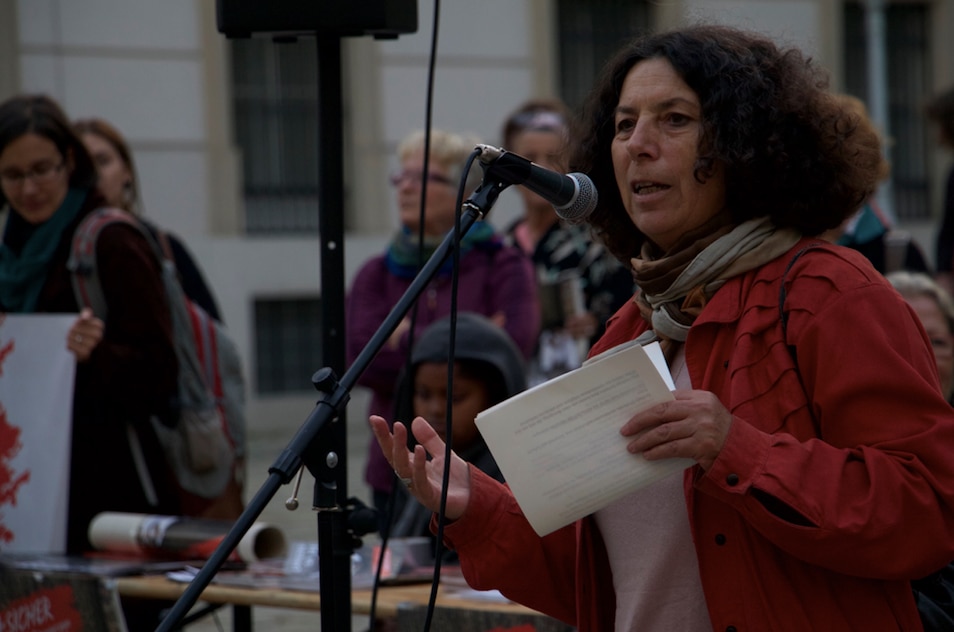 Anny Knapp works for an NGO in Vienna.
Kim Traill

“You have to guarantee people a life in dignity and the possibility to survive,” she said. “If they are in the middle of nowhere, there is no hope. There is nothing. This is not humane treatment.”

You have to guarantee people a life in dignity and the possibility to survive.

“You can call them hotspots, landing platforms, reception centres or whatever,” Ms Knapp said, “but as a country which has signed the Geneva convention and is committed to the protection of human rights, you are not allowed to close the doors to refugees.” The Austrian Interior Ministry told SBS News that while “Austria is interested in the experiences in Australia, we are aware the Australian model cannot be copied exactly in Europe due to different legal and geographical conditions”.

Only a few weeks ago, Austria’s Interior Minister, Herbert Kickl, announced the country would no longer take refugees via the UNHCR’s resettlement program.

But the spokesperson SBS News spoke to reinforced Austria’s commitment to the Geneva convention, although stressed: “those who need protection should be admitted into Europe and not those who can afford smugglers and come for economic reasons”. Those deciding who is who are, according to the ministry, “completely independent”. Erika Kudweis is not so sure. The mother of three from a village near Vienna has been working with Afghan minors for the past three years, finding foster families and running workshops to help them prepare for their court hearings. She has serious doubts about the impartiality of many officials, telling of judges who have determined a boy’s fate even before hearing their stories. Simply being Afghan is enough to be denied asylum, she says. 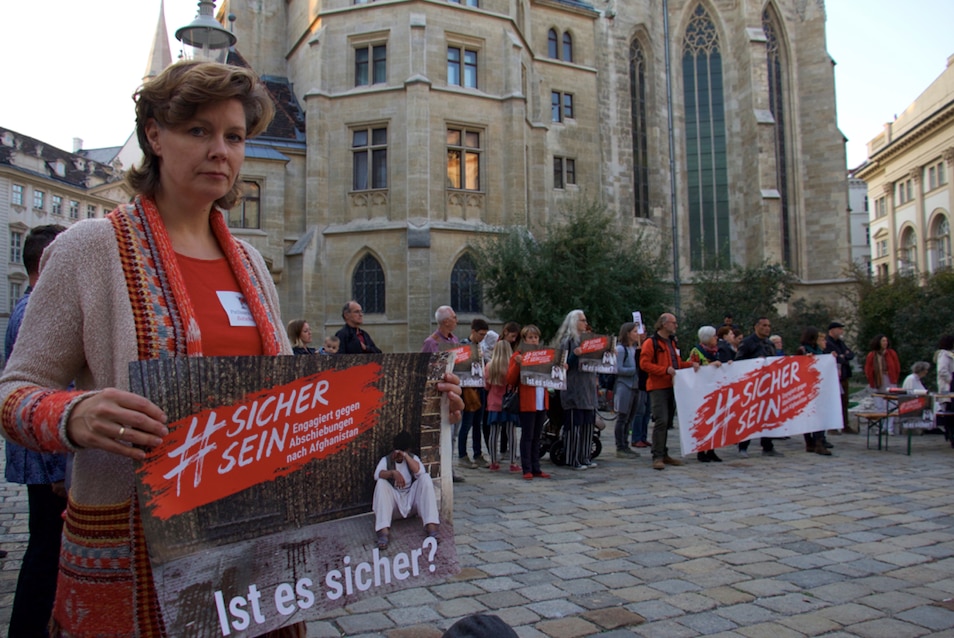 Erika Kudweis holds a sign saying 'Be safe. Is it safe?' at a demonstration in Vienna.
Kim Traill

“We who are helping the refugees here in Austria have the feeling it’s like rolling a dice, which judge you get,” she said. “There are judges who are very nice, understanding and listen carefully, and there is an ever growing number of judges who don’t do this. For them, every Afghan must simply be deported, especially the well-integrated ones.”

Children are suffering, unable to sleep or concentrate, she says. Several have attempted suicide after learning their applications had failed. And too often they are succeeding. A ten-year-old killed himself in Baden, a town just south of Vienna. Another handed a friend his phone and walked into the Danube River. Police never found his body. Shabab arrived in Austria alone at the age of just 15.
Kim Traill

Shahab, an 18-year-old from Afghanistan’s Parwan province, says god sent Erika to help him. He, like Yasin, is smiling. It’s a common defence reaction, says Erika, to put on a stoic face to mask their fear.

After arriving in Austria alone at the age of just 15, Shahab now speaks fluent German. Recently he started an apprenticeship in a restaurant in central Vienna. Austria is home now, he says. But the anxiety over his uncertain future is almost more than he can bear.

His application has already been rejected once, and he is now waiting for the results of his second attempt. Meanwhile, he has heard of several young Afghans being dragged from their beds in the middle of the night by police. Others were taken while at work, seized from hotel kitchens and thrown into handcuffs, he says. Since their deportation, no one has heard from them again. He feels permanently sick from worry.

“I know of people who have been deported, and I cry that one day my situation will be the same,” he said. “I don’t know what would happen if I was to be sent back. I have nothing there, in Afghanistan. I would just simply die.”

I don’t know what would happen if I was to be sent back ... I would just simply die.

“The Australian solution appeals to the Austrian government because it keeps the refugees out of sight and away from the rest of the population,” Erika said. “We have got to know them as people. They have made our lives richer, are part of our families now, and we will fight to keep them here.”

Authorities have told Yasin and Shahab that certain parts of Afghanistan are safe. “But they don’t understand how dangerous it is,” Yasin said.  He is sure return for him would be a certain death sentence. “When the Taliban learn someone has returned from Europe, they are killed. Murdered for abandoning Islam, for abandoning their motherland”.

Here in Austria, he and Shahab have done everything they can to integrate. But now Yasin is afraid it has all been in vain. “No one wants us Afghans,” he sighs. “Not here, not there.” 58 mins ago US Politics