The Sky News presenter said he was "appalled" by the appeal decision, continuing a long history of defending the jailed cardinal.

VIDEO ABOVE: After Pell's conviction was made public in February, The Feed spoke to young Catholics about the future of the church

Andrew Bolt said he is "appalled" that convicted paedophile George Pell will stay in prison, in a blog published minutes after the Cardinal had his appeal rejected.

The Victoria's Court of Appeal rejected the disgraced Cardinal's appeal against the guilty verdict. The decision means Pell will return to jail to serve his six year sentence.

"I am appalled," Bolt wrote.

Despite not being present in court when the jury heard the evidence, Bolt continues to argue that it would have been impossible that Pell abused two choir boys.

"In short, it makes no logical sense that Pell attacked these boys as described," he wrote.

The disgraced cardinal was convicted in December and later sentenced to six years in prison, with a three year non-parole period.

His lawyer Bret Walker SC tried to secure Pell's release or get a retrial. The arguments included that the verdicts were "unsafe and unsatisfactory".

Holding my breath for apologies from Andrew Bolt and Miranda Devine for defending a convicted child rapist #Pell pic.twitter.com/BtdGjqzgqb

Let's not forget that News Corp ghouls Miranda Devine, Andrew Bolt etc defended a now twice convicted pedophile and their editors were happy to publish their pieces and didn't give a damn about the victims. #pell @damonheraldsun @bennyglish

Bolt also appeared in coverage of the appeal decision for Sky News .

It appeared even on air, he still refused to accept the verdict.

"...to instead look at the evidence and the 12 improbabilities to make this a crime that was implausible physically, implausible logistically, and implausible psychologically."

Bolt said his faith in the justice system was 'much lower now'.

I would hate to see Andrew Bolt on Sky charged with contempt of court for his refusal to accept the Appeal Court’s 2-1 rejection of Pell appeal. He infers the 2 majority judges are part of the Pell vilification.

This is the latest incident in a long history of Bolt defending the convicted Cardinal.

After the 78-year-old's guilty verdict was made public in February, the commentator released a blog claiming he'd be 'falsely convicted'. 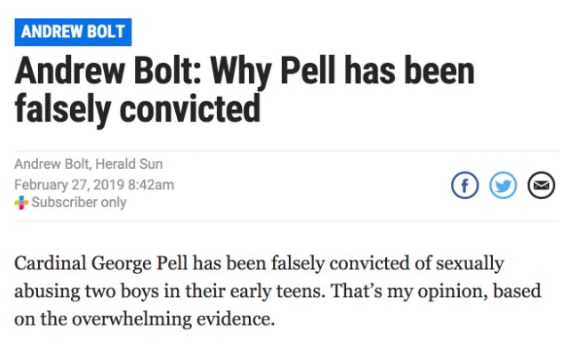 Bolt writes a regular blog for the Herald Sun/Daily Telegraph, while he also hosts a show on the Sky News channel. Pell has been taken down, now the internet is coming for his supporters

His February outburst saw a campaign emerge to push advertisers to boycott the show, and a separate petition calling for Newscorp to sack Bolt garnered some 8,000 signatures.

There's no word yet whether Bolt's latest defense will receive the same response. But it seems he's prepared for it, from comments he made on air today:

"I'm not going to be cowered by the people trying to get me kicked off Sky News, boycotting the advertisers, for saying what I believe to be true; that GP is guilty beyond reasonable doubt."