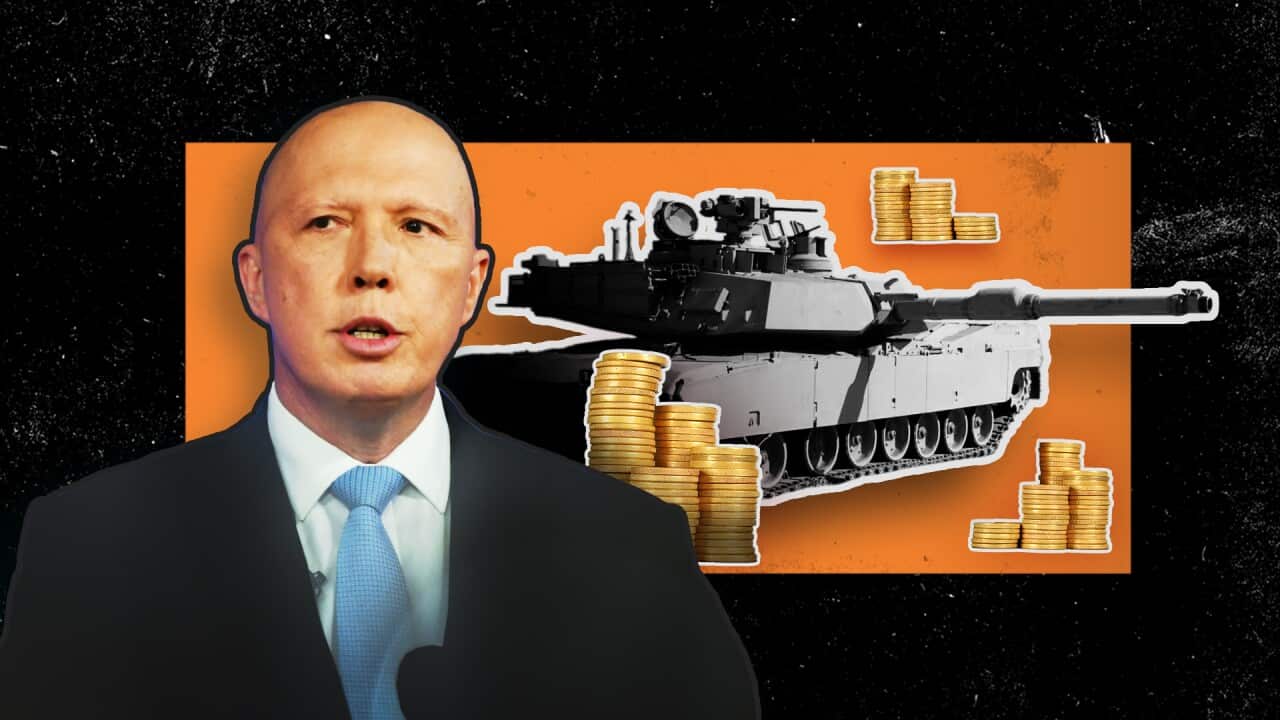 Experts weigh in on the recent $3.5 billion spend. Source: SBS

Amid a pandemic, where immediate concerns centre on strained hospital systems and a shortage of rapid antigen tests, some Australians had questions when the federal government announced a $3.5 billion defence spend in early January.

The first vehicles are set to arrive in 2024 and hypothetically could be deployed as early as 2025.

Advertisement
On Tik Tok, one young Australian asked: “This might be incredibly dumb - why do we need tanks? What are we fighting, we are surrounded by f*cking water?”

In the comments, others opinions agreed, while others made gags.

“We bought those submarines and were walking past the impulse buys at the checkout,” one user joked, referring to the controversial $70 billion submarine deal made under the AUKUS alliance last September.

We asked experts to weigh in on the purchase.

Do we really need tanks?

Chief of Army, Lieutenant General Rick Burr, said the tanks would be essential in Australia's participation with coalition forces.

"Because of their versatility, tanks can be used in a wide range of scenarios, environments and levels of conflict in the region," he said in a statement at the time of the announcement.

"This system is the only part of the Australian Defence Force that can successfully operate in medium to high-threat land environments."

In the same statement, Defence Minister Peter Dutton said the new tanks would give Australian soldiers the "best possibility of success and protection".

The tanks are a newer generation and an increase on the 59 Abrams the government bought in 2007. While the army is trained to use the tanks, Australia has not deployed a tank in combat since the Vietnam War - and some see the move as an excessive expense.

The federal government will likely try to sell the last fleet of Abrams as they're in good condition, said Declan Sullivan, who has a Masters in strategic studies from the ANU's Strategic and Defence Studies Centre. He said the US may even buy the Abrams back to strip them for parts, or at the very least oversee the transaction.

"If we can't sell them some may be kept as training vehicles, some will go to museums, but most may end up as scrap," said Mr Sullivan.

"An acquisition for the last war rather than the next war"

Tanks are the apex predator in land conflicts and the purchase will update Australia’s catalogue in case of future threats, said Dr Malcolm Davis, a senior analyst in defence strategy and capability at Canberra-based think tank the Australian Strategic Policy Institute.

Dr Davis told The Feed the notion that Australia won’t be returning to major wars, whether you agree with war or not, is “completely wrong”.

Dr Davis said that Australia is preparing for that possibility within this decade.

But he said there was no clear role for the tanks in overseas combat in our region.

“How does the Australian Army fight [with tanks] in the Indo-Pacific region, which is primarily maritime in nature, where the adversary we're facing is a major power like China, who is fighting primarily at sea, in the air, in space and in cyberspace?” Dr Davis said.

Dr Davis called them "an acquisition for the last war rather than the next war". He said while they might have been useful in the Middle East in Iraq and Afghanistan, the defence strategy is moving away from those regions.

Dr Davis told The Feed the Korean Peninsula is likely the only place they could be used.

"They're just too heavy"

The Abrams tanks weigh upward of 70 tonnes. How they will be transported outside of Australia is a key issue, especially if they need to be moved quickly.

"They're too heavy for the places we'd use them, the Pacific, South-East Asia, maybe peacekeeping in Africa, as they'd destroy the roads," said Mr Sullivan.
"They won't help us to fight China, and if we wanted an upgrade we could have waited a decade for technology like unmanned systems to get on the market."

He told The Feed Australia needs to be buying tanks for infantry support, not "fighting big tank battles, which is what the Abrams is designed to do".
The weight is so much of a problem that the US is developing a lighter tank that would be more mobile, a project Australia should have joined, according to Mr Sullivan.
"It might simply be said Defence haven't justified their purchase. It doesn't fit into any clear place in the Australian strategy," said Mr Sullivan.
Putting the previous Abrams tank on ships for transportation proved difficult in the past. Mr Sullivan said they could only transport the previous model on the landing craft ship in ideal conditions, which "highlights the difficulties we have deploying these heavy machines, and we're buying more that are at least just as heavy".

Dr Davis said we only have about two of the vessels that could carry the Abrams and those "ships have to then sail deep within the range of Chinese missile systems. So potentially, you could lose the ships and everyone aboard".
Dr Davis and Mr Sullivan both agree there is a $3.5 billion justification that still needs to be made for the purchase.

“There is a real disconnect, in terms of the military logic between acquiring these vehicles, and the actual operational application of these vehicles in a future war,” said Dr Davis.

“That disconnect needs to be closed. Because until then, there will always be questions as to the justification of these vehicles.”

The Feed reached out to the Minister of Defence Peter Dutton and the Department of Defence for comment.