Young emerging First Nations artists look at the pitfalls of the music industry, and talk about the changes they would like to see happen in Australia. 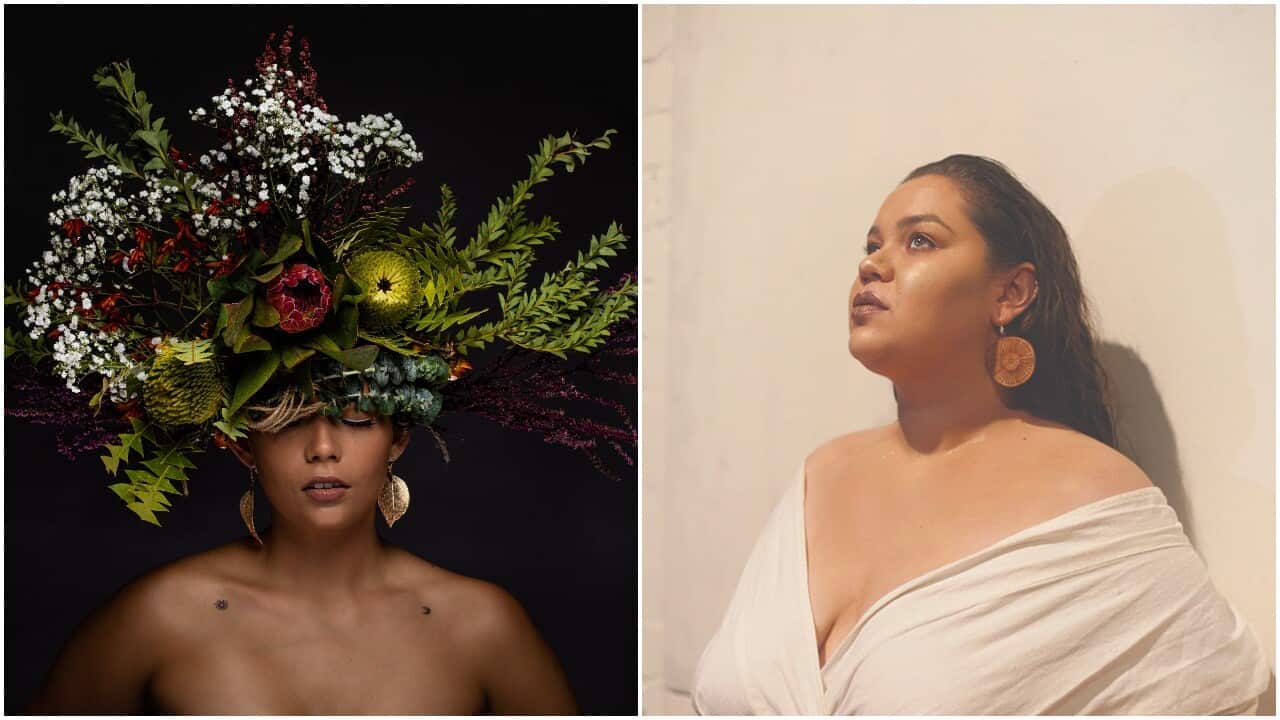 First Nation artists Kee'ahn (on the left), and Bump (on the right) share their thoughts on Australia's music industry. Source: Supplied

Kee'ahn is a Kuku Yalanji, Jirrbal, and Badu Island songbird, she describes her music as a blues island kind of vibe.

"[I'm a] singer-songwriter that talks about mental health a lot and identity and heartbreak and healing," Kee'ahn told The Feed.

"I'm just really trying to understand myself through my music."

Advertisement
Her first music teacher and singing partner was her dad, when Kee'ahn was younger they'd play at all the family birthdays, gatherings and funerals.

"My dad used to be a wedding singer and he'd sing Boys 2 Men stuff," she said.

"And then my mum used to be this 90s kind of hip hop dancer. And then they named me this thing that kind of combined their love for singing and dancing and performing."

Kee'ahn says she is trying to understand herself through her music. Source: Supplied

The word 'Kee'ahn' is a name from the Wik people of Cape York that means to dance, to sing, to play.

"I always say that singing is easier than talking for me," she said.

"It's channeling ancestors. Something that I don't understand and it's just coming out. And I think that's why I think the act of singing is like the oldest thing that I know how to do, like breathing."

The first person that ever heard her sing was her grandmother.

"My grandma used to tell a really sweet story that when I was four, when she was the first person to hear me sing, because I was singing Little Mermaid under the stairs," she said.

But making her way from four-year-old Kee'ahn singing under the stairs to making it in the music industry hasn't been easy -- especially given what she describes as "tokenism".

"Hearing especially for things like NAIDOC week where there's not that much support every other week of the year from major music organisations," she said.

"But then suddenly, they're like scrambling for First Nations artists to make it look like they're supportive.

"The music industry is quite conservative, still very male-dominated, very white so there's still like so much growth for change to happen."

Kee'ahn says sings for all her matriarchs that weren't listened to. Source: Supplied

Kee'ahn points to the creative director for the project, Alethea Beetson, a Gubbi Gubbi woman.

"She kind of is like typing away, like inside the industry that isn't an artist," she said.

"So I think like that needs to happen, like more mob need to be behind the scenes and having positions of power, as well as being artists, like we just need to be everywhere."

'Are you in this lineup because of your craft and your art or are you here to tick a box?'

Bumpy is a proud Noongar woman and says she's been singing and playing music since she can remember.

"It's kind of the thing that I have always wanted to do in my spare time," Bumpy told The Feed.

"When you get to the end of that high school kind of crossroad, and you're like, 'where do I go now?' The constant of it made me really aware that this is something that I really want to take on."

She remembers first coming down to Melbourne to study jazz and improvisation, it was there where she first saw a lack of representation.

"Even in kind of the education stream, it was really interesting to not see many mob there, even within teachings of Aboriginal music," she said.

Bumpy first noticed issues of representation within the music industry when she started studying in Melbourne. Source: Supplied

Like Kee'ahn, Bumpy was a part of the conversations at Big Sound -- it represented a shift in what she experienced already in the industry.

"We're so lucky to have such a strong community, especially here in Melbourne of First Nations artists," she said.

"The questions are starting to come to the forefront, I noticed that the Big Sound this year, a lot of the panel discussions were revolved around black Australia and making it 100% black."

Bumpy grew up in country Gippsland in a musical family. Her early memories of music are jamming away with her mother, who was in a band when she was a kid.

Now as she is in the throws of the industry, she believes there needs to be a shift in how First Nations artists are viewed.

"I think a general feeling being a First Nations woman in this industry right now is the tokenism of it," she said.

"Are you in this lineup because of your craft and your art or are you here to tick a box?

"And I think that's a really challenging thing at the moment and for us to be seen more than just Indigenous music like were peoples of many crafts and many art and many sounds."

Bumpy says there needs to be a shift in how First Nations artists are viewed within the industry. Source: Supplied

The message is the same as from Kee'ahn: there needs to be more Indigenous people in all corners of the industry.

"It's such a boxed, closed-in kind of place at the moment for us. There needs to be so much more representation not just on the stages, but curating and behind the scenes, in front-of-house and the businesses and everything that goes into putting on festivals and shows."

The act of singing is more than belting out lyrics into a microphone for Kee'ahn, she says, it's a part of her identity and her culture that she is carrying the stories of her ancestors while she sings.

"Our stories and our culture and lore was always told through song and dance and orally," she said.

"[When I sing] it's kind of just like being one of the voices for my matriarchs that weren't listened to."

Bumpy believes the nuances and diversity within First Nations people need to be recognised, if the industry is going to make a change. She wants the broadness of Indigenous identity to be celebrated.

"We're all together as a mob and as First Nations people, but our stories and other languages and cultural practices are so different from mob to mob," she said.

"I think that's kind of the point of trying not to claim centralised [identity] that what we're known as to put it in a box.

"It is kind of the broadness of it should be celebrated, rather than trying to define them."