Joe Rogan's guests and ideas are being banned and debunked all around him on Twitter, Youtube and in the public arena. But on Spotify, they're thriving. 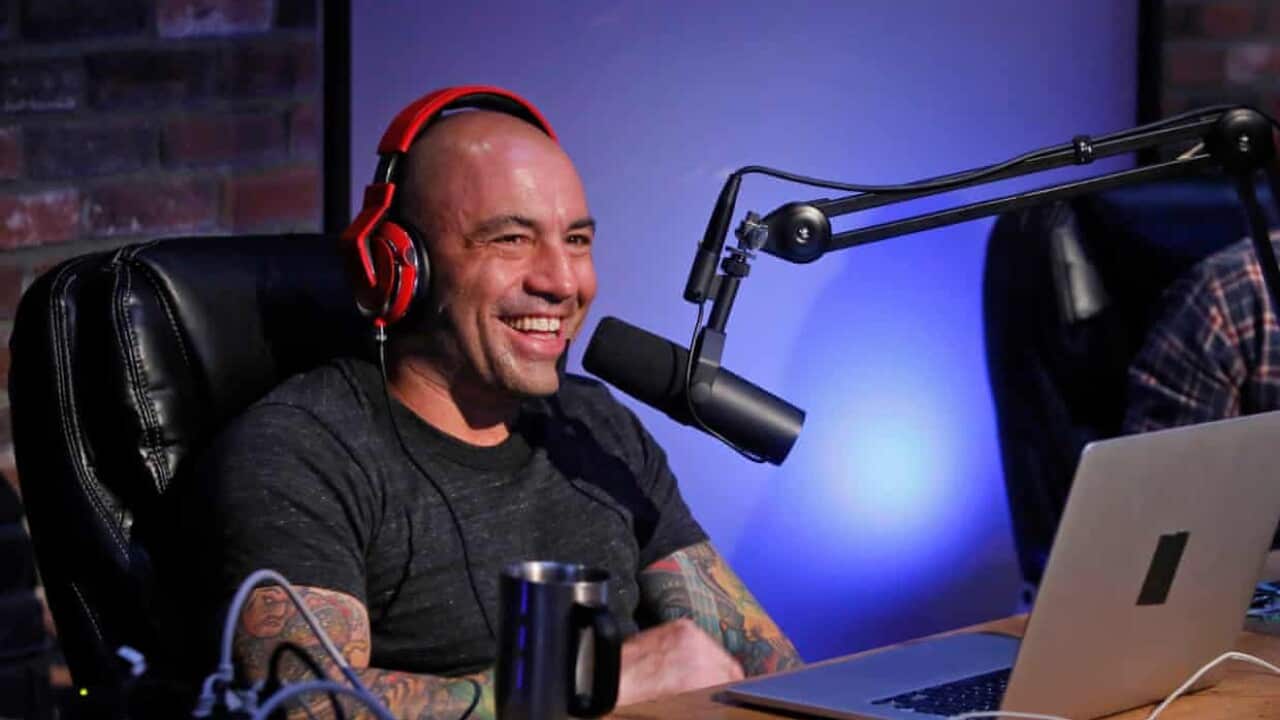 Joe Rogan's podcast, the most streamed on Spotify, has again come under fire for spreading misinformation. Source: Getty

His lengthy episodes range from two to five hours, he boasts millions of views, has A-list guests and hosts Spotify's most popular podcast.

Chances are you’ve heard of him. You might be listening to him. Or at least know someone who is a fan of Joe Rogan.

This week, "The Joe Rogan Experience" podcast came under fire for misinformation, but it wasn't the first time.

Advertisement
Hundreds of scientists, professors and public health professionals penned an open letter to Spotify urging the streaming platform to crack down on misinformation after an episode of the podcast promoted “baseless conspiracy theories” about the COVID-19 pandemic.

The letter took aim at Spotify, which exclusively streams Rogan's podcast, urging them to “immediately establish a clear and public policy to moderate misinformation on its platform”.

The coalition of professionals specifically highlighted one episode where Rogan interviewed controversial scientist and outspoken vaccine sceptic, Dr Robert Malone, who was banned on Twitter for violating the platform’s COVID-19 misinformation policy a day before he went on the show.

“By allowing the propagation of false and societally harmful assertions, Spotify is enabling its hosted media to damage public trust in scientific research and sow doubt in the credibility of data-driven guidance offered by medical professionals,” the letter said.

In the episode, Dr Malone cast doubt on vaccine safety, and accused Dr Anthony Fauci, the US’ top infectious disease expert, and mainstream news outlets of 'hypnotising' the population.

Although the episode has been removed from YouTube, it is still available to stream on Spotify.

“Mass-misinformation events of this scale have extraordinarily dangerous ramifications,” the letter, signed by 270 professionals, said.

“This is not only a scientific or medical concern; it is a sociological issue of devastating proportions and Spotify is responsible for allowing this activity to thrive on its platform.”

Under one episode of the podcast posted to Youtube, before Spotify obtained exclusive access, one fan commented: "I like when Joe has scholars and doctors on his podcasts. Makes him so legitimate."

Critics have previously said that Spotify’s misinformation policy is not as robust as social media sites such as YouTube and Facebook, which also face regular criticism on their approach.

Last April, users noted Spotify had quietly purged two episodes of the podcast from its platform. It is unclear why they were removed.

Apart from the three-hour episode with Dr Malone, the coalition of scientific and health professionals also underlined a “concerning” history of inaccurate claims made in the show that is listened to by millions.

In other episodes, Rogan has touted Ivermectin as a potential therapy for COVID-19 and further promoted the unfounded benefits of the horse dewormer he used when he contracted COVID-19 himself.

He has also previously said he does not think young people “need to worry” about being vaccinated against COVID-19.

“If you’re a healthy person, and you’re exercising all the time, and you’re young, and you’re eating well, like, I don’t think you need to worry about this,” he said in one episode before his interviewee agreed.

In a recent episode, Rogan admitted he was made to “look dumb” by ABC radio presenter Josh Szeps during a debate about the effects of the Pfizer COVID-19 vaccine.

Rogan said he had read reports that showed there was an “adverse risk” of myocarditis – an inflammation of the heart muscle – among 12 to 17-year-olds who received the vaccine.

Mr Szeps countered this by pointing out that there is an increased risk of myocarditis from COVID-19 among the same age group that exceeds the risk from the vaccine. Rogan eventually agreed with Mr Szeps.

Joe Rogan’s domination on Spotify and beyond

“The Joe Rogan Experience” has been broadcast exclusively to Spotify since September 2020 and was named the most popular podcast on the platform in 2021 and 2020.

When Spotify first announced its deal to licence the rights to the podcast, the platform's share price rose more than 11 per cent.  The deal is estimated to have cost Spotify $100 million - making it one of the largest licencing agreements in the podcast business.

Before his podcasting career began in 2009, and "The Joe Rogan Experience" was born in 2010, Rogan got his name in stand-up comedy which he continues to this day.

He later turned to UFC (Ultimate Fighting Championship) commentary with Rogan competing in and taking out multiple national Tae Kwon Do titles during his teenage years.

Rogan has since widened his commentary beyond mixed martial arts and is one of the most popular media personalities on the planet, with single episodes gathering a few million to tens of millions of views.

A loyal and large following listen to lengthy episodes covering mixed martial arts, politics, philosophy, comedy, psychedelics and anything in between.

His popularity, in part, comes from his push to have discussions that feel subversive. And critics say this is what makes him dangerous.

READ MORE
Elon Musk wants to colonise Mars. Can he? Should he?

He has faced backlash on numerous occasions for guests including conspiracy theorist Alex Jones who said the massacre at Sandy Hook elementary school was a hoax, and far-right commentator Milo Yiannopoulous who was banned from entering Australia in 2019 for his comments after the Christchurch terror attack.

Despite the frequent backlash on his comments and string of misinformation takedowns, Rogan's popularity shows no sign of yielding.

The Feed has contacted Spotify for comment but they did not reply in time for publishing.