Refugee Saif Ali Saif says he’s been denied permission to see his wife multiple times while she’s been in hospital. The stress of the situation culminated in an attempt to take his own life last month. 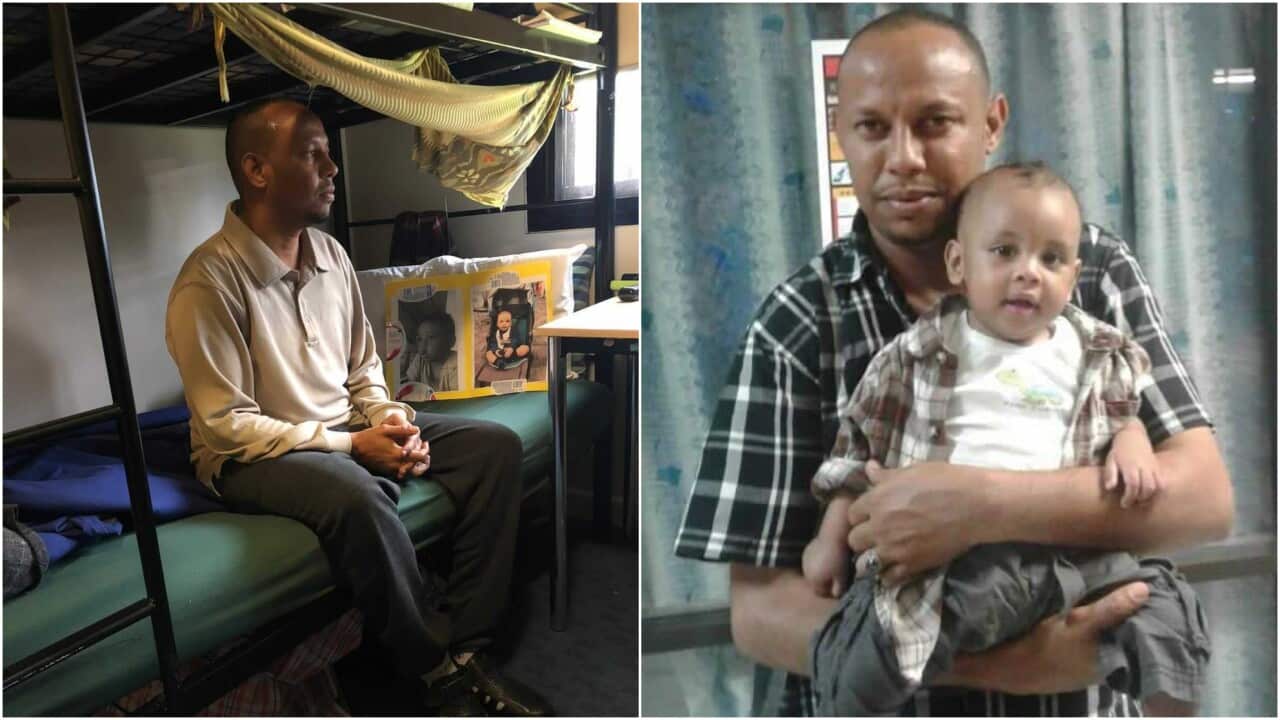 Saif Ali Saif has been locked up and separated from his son and wife for more than three years. They live just a 30-minute drive away. Source: Supplied

Somali refugee Saif Ali Saif claims the Australian Border Force has refused his multiple requests to allow him to leave detention under their guard to visit his wife Sabah in hospital.

Advertisement
He says she’s been “bleeding for seven months” due to uteroid fibrosis and an upcoming operation will be the third time she’s had surgery in less than a year.

Saif’s most recent request was to see Sabah after her surgery on November 25. He claims he did not receive a written refusal but was visited in person by staff from the immigration department.

“When I asked four months ago, it was the same when she had surgery. They said ‘you’re in detention, you’re not allowed to see your son or wife’,” he added.

Saif is detained at BITA in Queensland. Source: Supplied

Saif is currently detained in a detention centre in Brisbane. He was transferred to Australia from Nauru under the Medevac legislation last June. He can’t be settled here and is awaiting a place in the US,  but is seeking contact with his wife and son on compassionate grounds.

Saif’s wife and son are in community detention and live just a 30-minute drive away in Logan. They can move freely but Sabah is not permitted to study or work.

Despite them living close by, Saif says he hasn’t seen his family for almost nine months due to a ‘no-visitors’ policy in detention, sparked by coronavirus fears.

The Feed has seen documents showing Saif ticked a box reading ‘I would like to speak to the ABF’ about a request to see his wife in hospital after her surgery on November 25.

An ABF spokesperson told The Feed that “decisions on whether an individual can be present at a surgery are made by the treating hospital.”

Document obtained by The Feed shows ABF rejected Saif's request to be with his family in community detention. Source: The Feed

The Feed understands that if the hospital gave permission for a detainee to be present, the ABF would then decide whether the refugee could attend the hospital under their supervision. The spokesperson did not comment specifically on the outcome of Saif’s request.

Queensland Health has advised
all correctional centres
are allowed to recommence personal visits under COVID-safe plans, with up to three visitors allowed to visit for one hour a week. The same has not happened in detention centres holding asylum seekers and refugees in the state.

The ABF says “in response to the COVID-19 pandemic and based on health advice”, it has “implemented a range of temporary measures, including suspending visits to all immigration detention facilities.”

Related
‘The depression increased’: The families who can’t see their loved ones in prison

“The ABF is currently reviewing these measures, including planning for a revised and safe visits program that takes into account the changing COVID-19 situation across each State and Territory,” the spokesperson added.

The couple both fled civil wars and were placed in detention in Nauru after attempting to seek asylum in Australia by boat.

Since September 2013, the onshore protection program has excluded people who arrived in Australia by boat or without a valid visa,
according to Kaldor Centre UNSW
.

The policy was dubbed ‘Operation Sovereign Borders’ and ruled that anyone attempting to reach Australia by boat would be turned back to their country of departure, or sent to an offshore processing facility.

Three years ago, Saif says the ABF asked him to sign permission for his five-month-old son Saami, who was born on Nauru, to be transferred to Australia for urgent medical treatment.

But it came with a heartbreaking condition -- Saif’s wife and son would travel to Australia without him.

“This is the Australian system: they separate the families. My son is sick and my wife, they are doing surgery for her,” he added.

“That’s why sometimes I want to done my life because I can’t help my family.”

Document obtained by The Feed shows Saif's request to speak with ABF about visiting his wife in hospital. Source: The Feed/ Supplied

Being separated from his family has taken a toll on Saif, who was transferred from Kangaroo Point Hotel to BITA after attempting to take his life last month. The suicide attempt occurred after his wife was placed in the Emergency Department due to abnormal, heavy bleeding.

The Feed has seen a report by refugee and asylum seeker charity, The Queensland Program of Assistance to Survivors of Torture and Trauma, following Saif’s suicide attempt. The report placed Saif‘s risk level at 4 -- the highest possible rating where “individual coping strategies [are] exhausted”.

The report recommended that Saif be released into the community “immediately”.

“Mr Saif’s separation from his wife and son is exerting extreme pressure on his mental health. Key contributing factors in his suicide attempt... were the inability to help his wife when she was in the Emergency Department,” the report reads.

“Being reunited with his family will remove his most significant source of stress and allow him to engage external coping resources which he is not able to access in a detention environment.”

At just 19 months, Saif’s son Saami has been diagnosed with behavioural issues and developmental delay. The Feed has seen medical documents showing Sabah had to reschedule surgery on at least one occasion in June as she had no one to care for her son.

When Sabah undergoes surgery this month, Saami will be supervised by caseworkers and friends of the family.

According to Saif, Sabah has been struggling with her health for almost a year.

“My wife, she’s bleeding always. They did two surgeries to stop the blood but it’s the third time and they don’t let me stay with her, to help her,” he said.

“She cannot cook in the house now because sometimes she falls down and no one knows, no one cares and she wakes up and gets back up.”

The Feed has also obtained a document that shows the Australian Border Force denied Saif permission to stay with his family in community detention in March.

Saif says his family is awaiting a response from the American government regarding his family’s request for resettlement.

This is part of the refugee resettlement deal, negotiated in 2016 between the US and Australia to resettle some
asylum seekers
who had been held in offshore detention in Nauru and Manus Island.

Home Affairs officials confirmed to a Senate estimates hearings in October that resettlements facilitated by the Trump administration were set to end by March or April 2021.

Alison Battisson, Director at pro-bono human rights law firm, Human Rights 4 All, says refugees are entitled to lodge requests like Saif’s but she’s “never heard of the request being granted.”

“The mind boggles that such requests wouldn’t be granted,” she told The Feed.

“These are people who on the majority have no criminal records or are in no danger of fleeing. And they would be escorted to the requested place.”

Ms Battisson says requests like Saif’s are not made lightly.

“They understand they’re in a place of detention and they can’t go out for coffee,” she said.

“When there's a family member in acute distress, you would think that considering this is administrative detention and not criminal detention, that punitive element of denying them access to family in distressing moments wouldn't apply, but apparently it does,” she said.

Ms Battisson believes that by separating families such as Saif’s, the government is enacting a “return-orientated” process, which she says is illegal under international law.

“What that means is that you make the place of where you're being detained and seeking refuge so terrible that you voluntarily agree to return to your home country,” she said.

“I think that is a strategy that the government is employing to encourage these gentlemen,to go back to a place of harm, i.e. give up on their refugee claim and leave.”

Since 2013, New Zealand has had
an offer on the table
to relocate 150 asylum seekers from Nauru and Manus Island in Papua New Guinea - with the Ardern government ramping up the push.

“There is no obvious, coordinated long-term plan for detainees,” Ms Battisson said.

“The New Zealand offer to accept these men has been rejected but remains open. There are a few organisations in Canada that are privately sponsoring asylum seekers, who are particularly at risk and LGBTI people. But other than that, there’s no plan.”

Ms Battisson says that, in the past, government caseworkers have come to see her clients and told them that if they don't return to their country of origin, they will be sent to Christmas Island.

“The longer you keep these men isolated, the more likely it is that that will return to their country of origin,” she said.

“So I suspect we will have a Christmas where people are not able to physically access their families.”

For Saif, not being able to see his family is intolerable. At BITA, he stages regular protests, walking around with a piece of cardboard that shows a picture of his son Saami.

“I miss my wife and my son very much.”