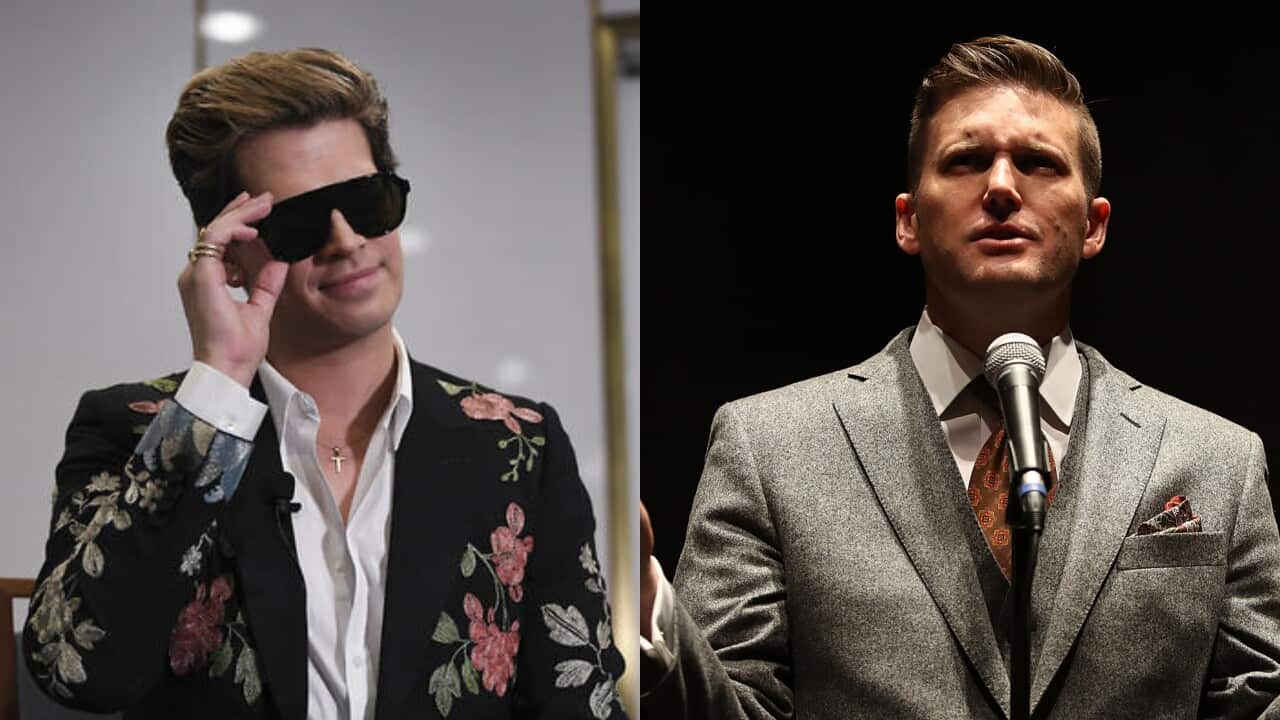 Audio of white nationalist Richard Spencer going off in a racist rant against Asians and African Americans has been leaked online.

Spencer, who you might remember as the man who was punched in the face with a pepe meme in his pocket, came to prominence in the US as a part of the alt-right movement. He’s a strong advocate for a
“peaceful ethnic cleansing.”

The recording was allegedly taken in 2017, after Spencer found out about the death of Heather Heyer, the counter-protester that was killed at the
Charlottesville ‘Unite The Right’
rally by a white supremacist.

In the recording, Spencer is audibly furious over the death and the negative press that it would cast on his movement.

“My ancestors f**king enslaved those little pieces of f**king sh*t,” Spencer is heard shouting on the recording.

“Like this is never over. I win. They f**king lose. That’s how the world f**king works,” Spencer continues.

I rule the f**king world. Those pieces of shit get ruled by people like me.

The recording goes on in a similar vein for over a minute with Spencer spitting several slurs against Asian and African American people.

When asked by
The Guardian
to confirm the recording, Spencer said he did not recall making the comments, but did not deny that it was his voice.

Dr Kristy Campion, a lecturer in alt-right terrorism at Charles Sturt University, says the audio is a look into the tortuous alt-right movement in the United States.

“[Spencer] has been very successful in branding himself as a respectable, concerned citizen. In the last couple years he has been very careful to sanitise what he says,” Campion said.

“It would be excellent if this could rip the veil away from the people that do follow Spencer but realistically, I would be surprised if this made a difference. People who follow Spencer generally also follow those ideas.”

What is surprising is who leaked the audio of Spencer - another alt-right figurehead, Milo Yiannopoulos.

Yiannopoulos, who is a former reporter for alt-right publication Breitbart, has historically aligned himself with people in the white nationalist orbit - including Spencer.

In 2016,
BuzzFeed
uncovered a video of Yiannopoulos singing karaoke in a bar while Spencer made a Nazi salute in the audience.

Responding to the video, Yiannopoulos disavowed Spencer saying that his “extreme myopia” prevented him from seeing the salutes in the crowd.

Dr Campion say there’s an ongoing power battle present in parts of the US alt-right movement.

“What we see in the extreme right is a constant manoeuvering of leaders to elevate their status in the movement,” Dr Campion told The Feed.

That old saying that “everyone wants to be Fuhrer” feeds into it and that’s why they’re so fractious and disunited.

“That’s ultimately why the ‘Unite The Right’ rally failed so badly.”

Spencer and Yiannopoulos are two of the movement’s high-profile members.

Yiannopoulos’ profile has dropped in recent years, following his ban from Twitter in 2016 and crowdfunding platform Patreon in 2018.

The last we heard of him was in late 2018, when
The Guardian
reported he was $2 million in debt, following his speaking tour of Australia.

His attempt to grab back the spotlight by being ‘Grand Marshal’ of Boston’s controversial ‘Straight Pride Parade’ was overshadowed by the event’s
large counter-protest movement.

For Spencer, on the other hand, things have been business as usual.

Spencer still has control over his Twitter account. In July he was invited onto US news channel CNN to discuss President Donald Trump’s racist tweets towards members of the US congress.

“You have the front stage which is what we see on CNN and then you have the backstage, what you see behind closed doors and at rallies,” Campion said.

READ MORE:
What you need to know about the conservative politics conference coming to Sydney
When Jordan Peterson speaks you should pay close attention, here’s why

“What you can see with that leaked tape is that is backstage language. I would be surprised if Spencer continues to get invites to mainstream media now that frontstage/backstage split is revealed.”

Campion notes that the rejection of extreme right-wing views, especially when they are presented as political discourse, is becoming more prevalent.

“Some of his followers will feel very validated in their own worldviews by having heard the tape, however, now that the public can connect them to these real world acts of violence, the acceptability has changed,” Campion told The Feed.

The infighting between US alt-right figureheads like Yiannopoulos and Spencer signals to Campion a shift in the movement.

“This happens in cycles, we saw it happen in the ‘90s in Europe, particularly. People were like, ‘the movement is consolidating’ but ultimately it comes to loggerheads when leaders just can’t get along, the movements fall apart,” Campion says.