The Feed speaks with Amelia Telford, a Bundjalung and South Sea Islander woman, who’s leading the fight for environmental and climate justice in Indigenous communities across Australia. 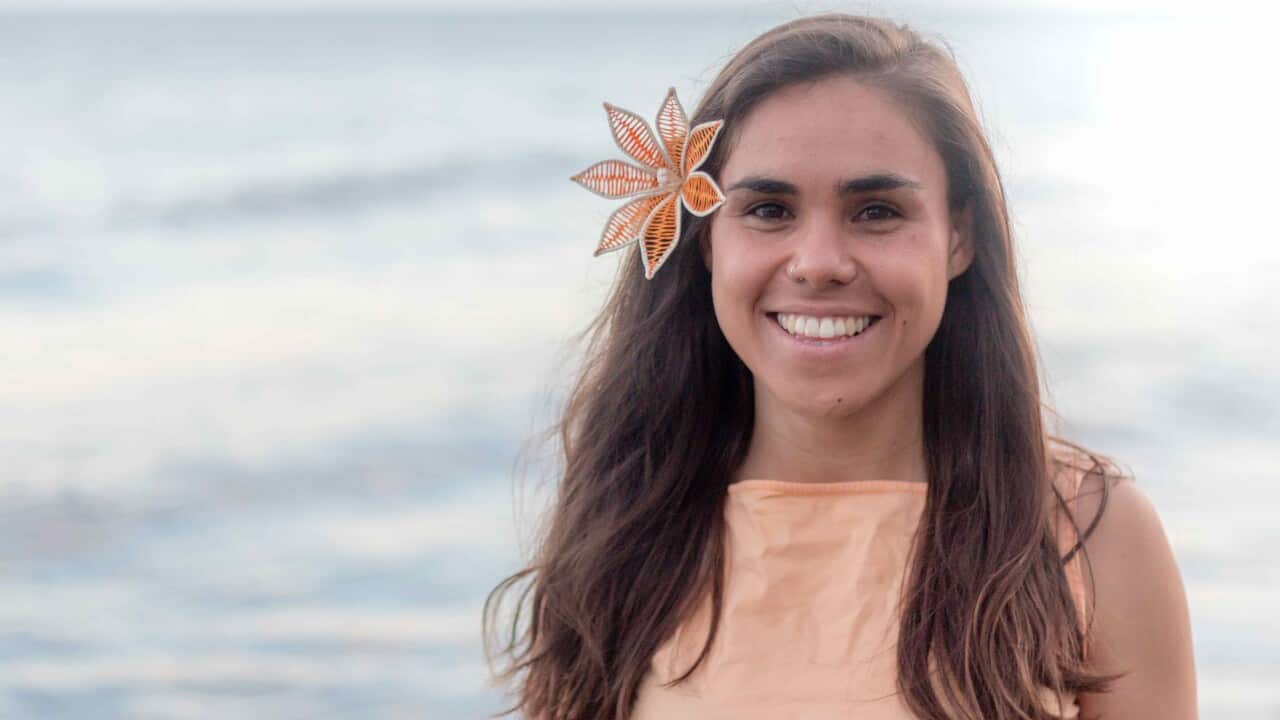 Amelia Telford is a young Aboriginal and South Sea Islander woman from Bundjalung country, who’s on the forefront of the fight against fracking in remote communities in the Northern Territory.

The 25-year-old first became passionate about climate justice as a teenager while witnessing the coastal erosion and sand mining in her hometown in northern NSW.

As a young Indigenous person, Amelia says she felt “a huge responsibility to take action on these issues.”

Advertisement
“When it comes to climate change, it's our land that we're talking about as being destroyed by fossil fuels and other forms of mining. But in the climate movement, I realised that there was a really big gap in terms of colour.”

Driven by her desire to make a positive change for Indigenous communities, at 18 years of age, Amelia moved to Melbourne and co-founded Seed, an Indigenous youth climate network.

In her role as National Director at Seed, Amelia was awarded National NAIDOC Youth of Year in 2014. In 2015, she was also recognised as Bob Brown's Young Environmentalist for the Year and the Australian Geographic’s Young Conservationist of the Year.

But she says one of Seed’s biggest achievements was that it succeeded, along with an alliance of
13 environmental groups
, in getting Australia’s four largest banks to rule out funding the Adani coal mine in Queensland.

“To know that young people can take on big corporations, it’s something truly hopeful and a story of success,” she told The Feed.

Now Seed is calling on Origin Energy to stop gas fracking in the Beetaloo Basin in the Northern Territory, which Amelia claims is a risk to the local Indigenous community’s “country, culture and future”.

“If fracking goes ahead in the Northern Territory at the scale at which these companies are proposing, we wouldn't be able to reach the Paris climate targets of keeping global warming to less than 1.5 degrees,” Amelia said.

But it’s not just carbon that’s a concern. Amelia is worried that fracking will have an impact on local water sites.

“There's no way that those companies could ensure water from their wastewater plant is not going to end up mixing with floodwaters. And eventually, threatening people's drinking water.”

“It's not only important for people's drinking water, it's also the stories that go with those water systems and underground sacred sites, and that's something that I think these companies just really don't understand.”

A spokesperson at Origin Energy told The Feed the company “unequivocally supports the United Nations Framework Convention on Climate Change and the Paris Agreement”.

“We were the first Australian company and remain the only energy company in the country to set emissions reduction targets endorsed by the global, independent Science Based Targets initiative,” the spokesperson said.

“Our longer-term aim is to achieve net-zero emissions across our business by 2050.”

Origin also claims there are “safeguards in place to ensure water is protected” and that they “work with the Northern Land Council and host Traditional Owners to ensure sacred sites are protected”.

Protesters and Traditional Owners from the Northern Territory hold a small rally outside the Origin Energy AGM in 2018. Source: AAP

“Sacred site clearance surveys are undertaken for each and every location - which are then certified by law by the Aboriginal Areas Protection Authority. All our activity has been certified and complies with the NT Sacred Sites Act,” they added.

“Sacred site clearance surveys allow Traditional Owners to be part of decision making about where activity can take place.”

Origin
also
states on its website that a 2020 study by the CSIRO into the impacts of hydraulic fracturing (fracking) in Australia found “it has minimal to no impact on air quality and no detectable impact on local waterways, groundwater or soils.”

However, the company acknowledged the research was funded through CSIRO’s Gas Industry Social and Environmental Research Alliance, “which industry and Origin contribute to”.

Conversely, a 2013 report by
The Australia Institute
claimed known health hazards involved with fracking include “the possibility of water contamination from fracturing chemicals and wastewater; air pollution; and decreased soil quality.”

For Amelia, Australia’s reliance on coal and gas remains a major threat to the country, particularly for remote Indigenous communities.

“It’s fossil fuels and the impacts from climate change -- whether it's rising sea levels or droughts, floods or heat waves -- Indigenous communities that are already in really vulnerable conditions must have the resources to adequately deal and adapt to climate change,” she told The Feed.

When asked if she ever feels burnt out or exhausted by the demand of climate activism, Amelia said she focuses on the responsibility we have “as Indigenous people and as people living on this planet”.

“The fight has been going on a really long time here in Australia -- ever since colonisation -- but when you look around the world, Indigenous people who have been on the forefront of change have so much strength and so much resilience,” she said.

“We can learn a lot from the resiliency of our people. Realistically, this isn't a sprint, it's a marathon. And we've got to think about it that way. Because change doesn't happen overnight.”