What's wrong with these front pages?

A picture is worth a thousand words. 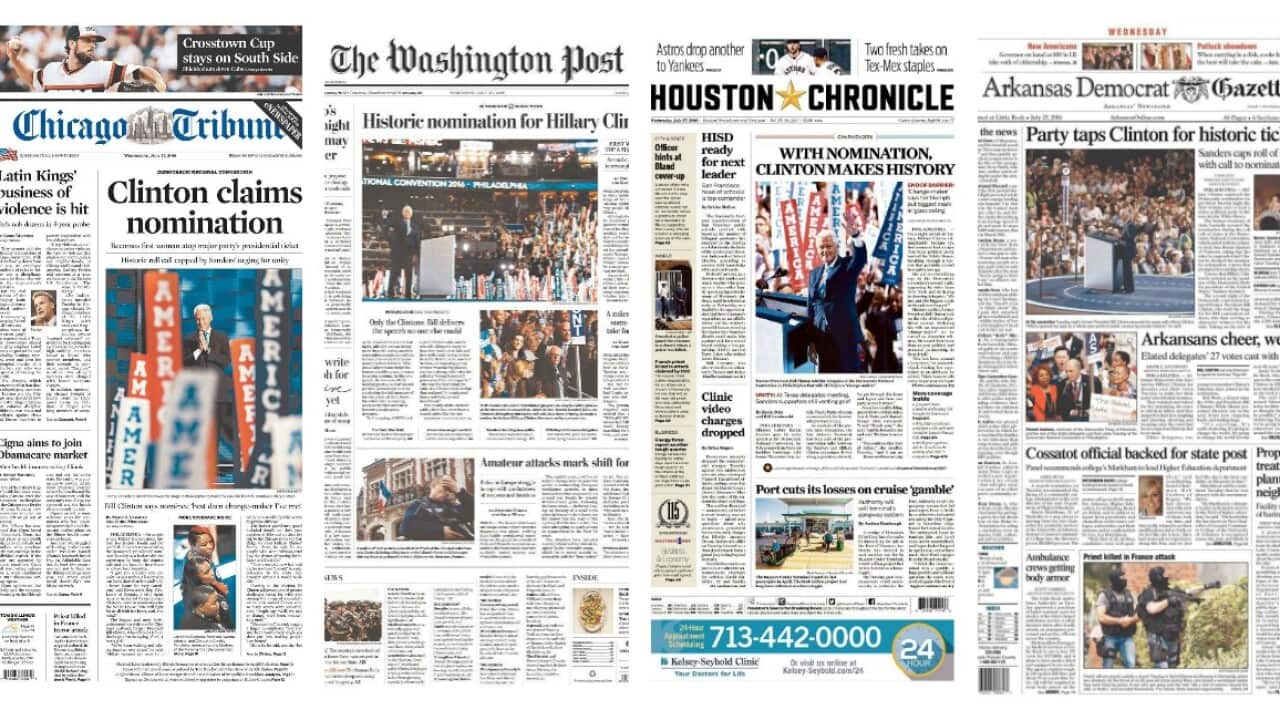 Hillary Clinton just made history as the first woman to be nominated by a major party to be the president of the United States.

But while newspapers around America ran the groundbreaking news on their front pages, many of them accompanied the story with a photo of her husband.

Only 19 of the 50 leading US newspapers ran a photo of Hillary Clinton, while the rest chose to feature pictures of former president Bill Clinton, her former Democractic rival Bernie Sanders, DNC crowd shots, or they didn't run the story at all, the
BBC reports
.

Advertisement
The Chicago Tribune, the Washington Post, the Seattle Times, the Washington Times and the Houston Chronicle were just some of the newspapers who omitted a photo of Hillary Clinton from their front pages.

The sad irony of writing about a woman making a crack in the glass ceiling while illustrating it with a photo of her husband was not lost on many Twitter users.

Bill Clinton did give the keynote address at the DNC on Tuesday night, and Hillary Clinton only appeared on a large screen in the convention hall via satellite at the end of the night, which may have been too late for some newspapers' deadlines.

"She was on a live video very late in the evening, making for a poor photograph. Bill Clinton's speech was the big moment, and another big moment was when Bernie Sanders moved that she be given the nomination by acclamation. So we carried those two photographs."

However, other newspapers got around that by featuring past images of Hillary Clinton, or using photos of women in the crowd at the DNC, such as the New York Times, which chose an image of three women cheering with a "Girl Power" sign.

The Seattle Times realised they had misjudged the occasion, and issued an apology to its readers the following day.

"Wednesday’s front page, which featured a banner headline, 'Clinton makes history with formal nomination,' failed to include a photograph of Hillary Clinton, the first woman to lead a major-party ticket, instead putting the visual focus on former President Bill Clinton, who made an impassioned case for her election as the next president," wrote the newspaper's assistant managing editor Leon Espinoza.

"The omission upset many readers. In hindsight, we focused too much on the live moment and not enough on the history being made. We apologize for missing the mark."