Australia’s summer of bushfires released more than 830 million tonnes of CO2, according to new estimates released by the government.

That’s more CO2 than the entire country typically emits in a year -- and Australia already has the 15th highest domestic emissions in the world, out of 193 countries.

In fact, the summer’s bushfires released more CO2 than all but five countries; China, the US, India, Russia and Japan.

However, the government reports that the greenhouse gas emissions generated by the bushfires will have a “negligible impact” on Australia’s progress towards its 2020 and 2030 emissions reduction targets, as the country’s forests are expected to re-absorb carbon as they recover over the next decade and beyond.

As an example, the report cites evidence that more than 98 per cent of forests destroyed during the 2002-03 bushfire season recovered within 10 years.

The government reports that the recovery of Australia’s forests following this bushfire season is expected to be complete, “in the absence of new disturbances” such as future bushfires.

The government report suggests the damage done by the 2019-20 bushfire season was more extensive than previously thought.

In February, research published in the journal Nature Climate Change estimated that between September 2019 and January 2020, fires destroyed around 5.8 million hectares of broadleaf forest, or more than a fifth of Australia’s forests. 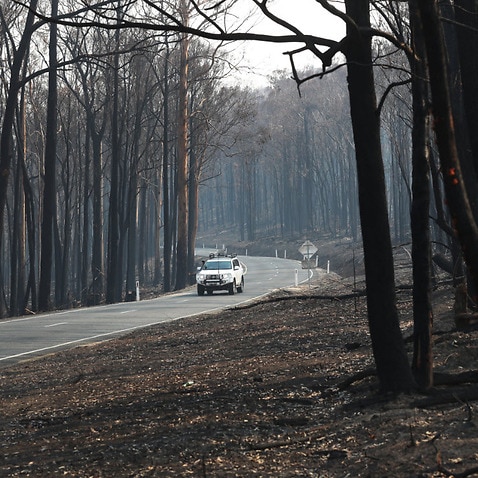 The government’s latest report estimates that the current bushfire season affected around 7.4 million hectares of Australian forests up to 11 February 2020, a much higher figure.

The graph below shows the area burned this year compared to all previous years dating back to 1851, none of which come close to this year’s damage. 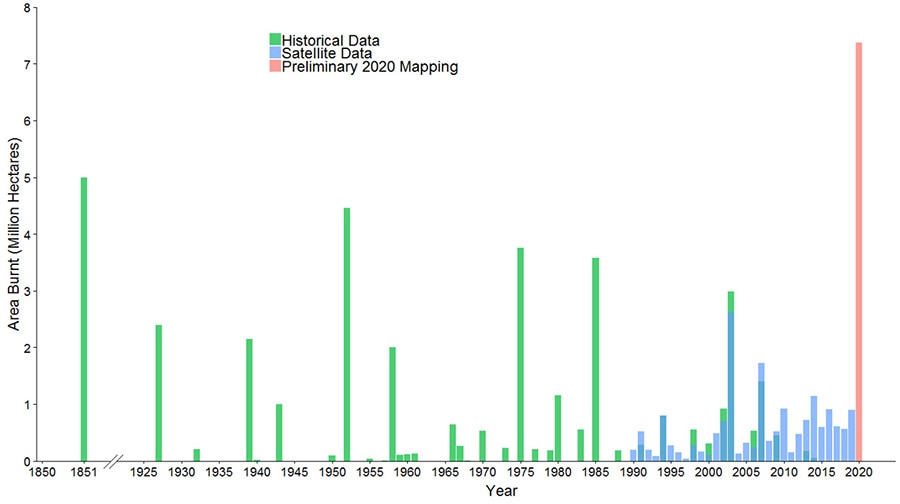 The impacts of such extensive burns go beyond greenhouse gas emissions. Alongside the well-documented economic impact of the fires, estimates by the University of Sydney’s Professor Chris Dickman suggest that the fires killed more than one billion animals nationwide.

Professor Dickman told the ABC in March that this estimate was based on a burn area of around 6.25 million hectares, and is clearly an underestimate now that more extensive burn figures have been released.

“A billion sounds a big number, but it’s a very conservative one,” Professor Dickman said, adding that the figure does not include bats, frogs or fish.

Studies suggest that the summer’s catastrophic bushfires were made at least 30 per cent more likely as a result of climate change, and climate scientists have warned that we will face extreme conditions like these more frequently if global temperatures continue to rise.