Along with 100-or so residents, Michelle Hinwood will be locked up in her Western Sydney unit after six cases of COVID-19 were detected in the building. She told The Feed the heavy police presence on Monday night was “a little bit scary”.

Michelle Hinwood, 33, was getting ready to pick her children up from school when she received a call from NSW Health, telling her there was a positive case in her building and she needed to stay put.

Michelle told The Feed she’s thankful that her twin daughters, who are nine years old and immunocompromised, will be isolating at their father’s place.

Michelle is one of the 100-or-so residents in Western Sydney who was put under police guard after six people in her apartment building in Blacktown tested positive to the virus.

She said two people came to her door on Monday night and asked her to take a test for COVID-19. Not long after, police officers appeared outside the building.

“I started to freak out a little bit then because I was thinking ‘why are there so many police here for this? It looks like they'll just be putting the building under police guard’.” Michelle tested negative to COVID-19 but is still required to isolate for two weeks.
Supplied
Overnight, Michelle received a negative test result. However, as Michelle is considered a close contact, she was told she’ll have to stay in isolation until midnight on August 9.

Michelle told The Feed that this morning, Monday 27, was “intense and overwhelming” as flocks of TV crew showed up at the building, interviewing residents from their balconies.

Living alone in her apartment unit, Michelle is concerned about how her mental health will track over the next two weeks.

“I’m going through a lot of emotions like ‘oh god, it’ll be 14 days by myself, this is gonna be insane’,” Michelle said.

“There's only so much I can do; a lap around my lounge or seeing the same four walls. It just feels very, very constricted.

“I'm just going to have to take each day as it comes and rely on family and friends.” 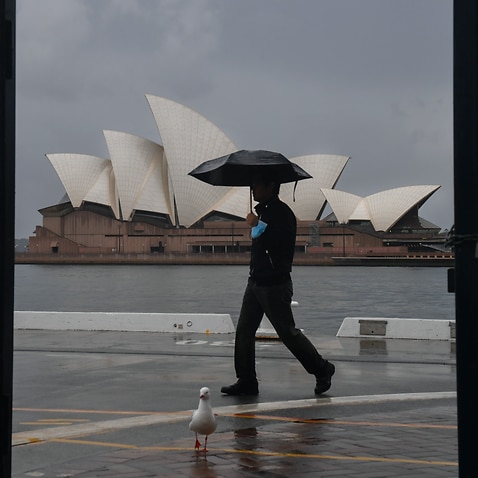 It’s not the first time an apartment block has been put under hard lockdown during the country’s multiple lockdowns.

Two weeks ago, an entire building in Bondi Junction was forced into a two-week lockdown after five apartments became infected with COVID-19.

In Victoria, the  Ariele apartment building in Maribyrnong was also forced to undergo lockdown after two removalists that tested positive for COVID-19 placed furniture in the building’s lift.

‘Residents needs are the priority’

Chief Executive of Evolve Housing Lyall Gorman told The Feed the organisation is doing everything in its power to ensure residents are well looked after.

“We won’t be making one-off calls, we'll be doing those every day, twice a day where needed,” Mr Gorman said.

“We've also got an emergency hotline set up for the residents - our goal was to understand their immediate needs and this has all happened in the last 12 to 18 hours.” Police are seen at a lock downed apartment building at Devitt Street in the south western suburb of Blacktown in Sydney, Tuesday, July 27, 2021.
AAP Image/Mick Tsikas
Mr Gorman said the residents’ needs range from urgent medical treatment to ensuring they have nappies for children and food for pets.

“I’ve had endless calls of offers of support, which reinforces the great values of Australia; that when things are tough we look out for each other,” he said.

“And that support has been incredibly invaluable and really heartening.”

In a statement to The Feed, a spokesperson at the Western Sydney Local Health District (WSLHD) said all residents of the building have been determined to be close contacts.

The spokesperson said the situation reinforces the need for people to wear face masks inside shared areas like lifts, foyers, stairwells and laundry facilities.

WSLHD is working “with the residents and building management to assess the situation… and implementing measures to address infection control and the health and welfare of residents," the spokesperson added.

“The NSW Police Force and private security are ensuring the safety of the building.

Michelle said she received a pamphlet under her door this morning, with information about the support available for residents.

She said she was also “comforted” by a call from her housing provider this morning.

As Michelle is unvaccinated, she’s concerned about contracting the virus. But she said she understood the public health measures, considering the severity of the Delta strain.

“There's still a chance that I might get it.”