Residents are bravely speaking out for the first time. They claim they’re being forbidden from disclosing their sexuality and in some cases, are restricted from seeing other residents - and there are no consequences for aged care providers that aren’t inclusive.

LGBTQI+ elders say they’re being forced to suppress their sexuality and go back into the closet, out of fear of being discriminated against by aged care providers.

Several elderly residents and advocates have told The Feed LGBTQI+-phobic discrimination is occurring - with many more living ‘invisibly’, too scared to speak up.

84-year-old Malloy lost her partner of 23 years, Natalie, in 2014. She’s since been residing in an independent living unit, within an aged-care provider.

She claims management have forbidden her from disclosing her sexuality, and have restricted her from visiting other residents.

“You're not allowed to talk about your sexuality in the nursing home,” Malloy says. 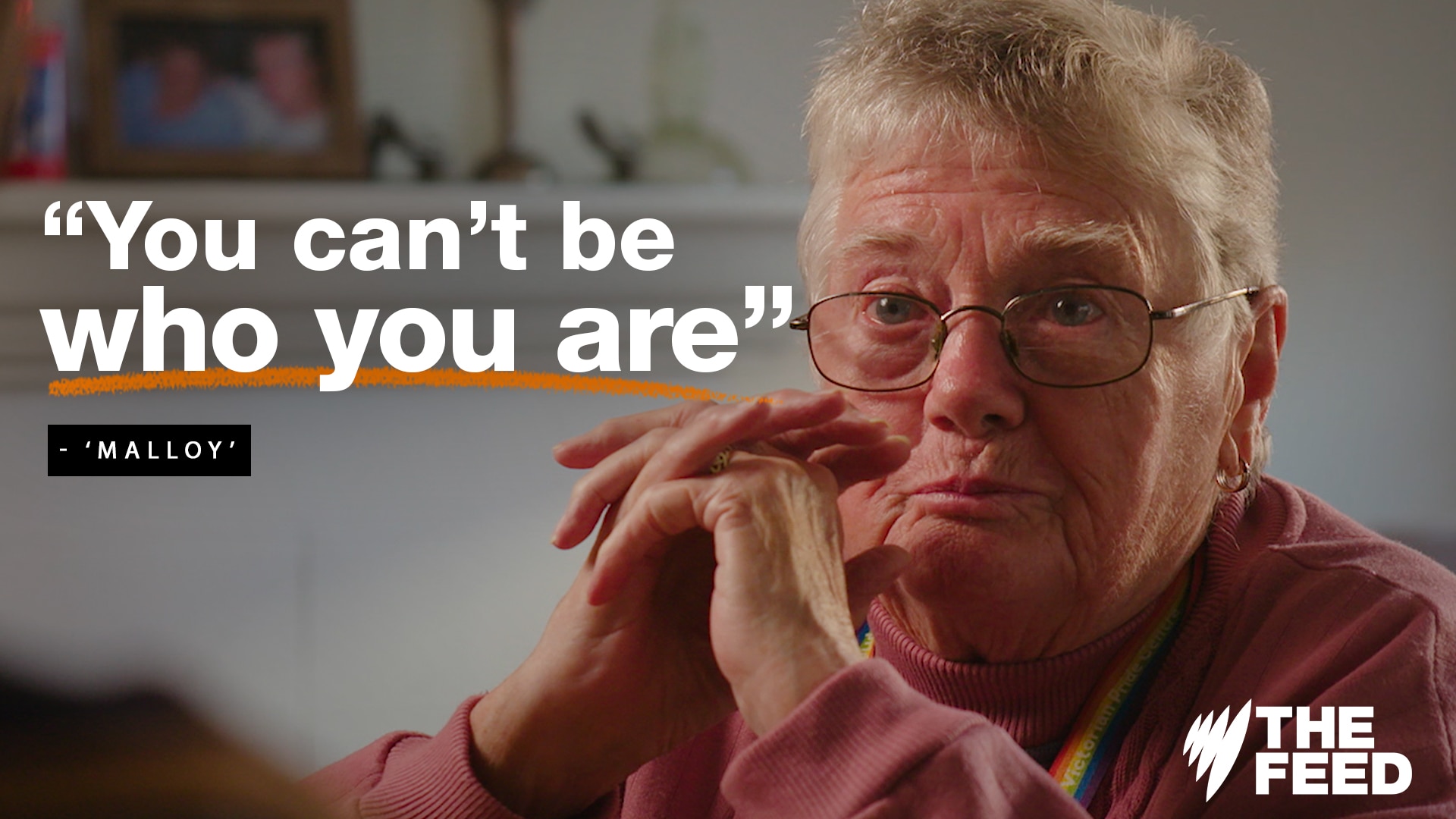 “The Manager said that I'd been kissing some of the residents and I said to her well that's not true. The last person I kissed was my partner after she died.”

It’s impossible to know how many LGBTQI+ people there are over the age of 65 because there’s almost no data collected on the number of LGBTI people in Australia.

But we do know that LGBTQI+ elders are more likely to need aged care, because many don’t have children or family support.

Dr Catherine Barrett is the founder of Alice’s Garage, a national advocacy organisation working for the rights is LGBTQI+ elders. She says very few residential care services have a ‘rainbow tick’ of approval - and that leaves elders ‘petrified’.

“There are hundreds of others like Malloy who experience abuse and discrimination on the basis of their LGBTI identities." It’s not just residential aged care. In home services account for a large portion of care provision. Discrimination is feared there too.

“I've talked to people who've been through it, they put photographs away of their boyfriend or their partner or their girlfriend,” 70-year-old Max tells The Feed.

“It's just a horrific thing.”

Despite having pneumonia, a punctured lung, a kidney transplant and open-heart surgery, Max refuses to move into residential care, or have aged care workers come to his home.

“You feel like you're back on that alien planet, and you're the illegal person, you shouldn't be there.”

Here’s what the government is doing to help:

Since 2012 the Federal Government has spent more than 13 million dollars on strategy and a range of projects targeted at making aged care LGBTQI+ inclusive and addressing LGBTQI+ ageing needs.

But elders themselves and advocacy groups say the government needs to do more. There’s currently no legislation requiring aged care providers to be inclusive.

Samantha Edmonds is the Silver Rainbow National Project Manager at the National LGBTI Health Alliance. The Alliance is the national peak health organisation in Australia for those who provide health-related programs, services and research focused on LGBTI and other sexuality, gender, and bodily diverse people and communities.

She says it’s not enough to rely on providers to want to be inclusive.

“There's no consequence for a provider that's not inclusive,” she claims. “The onus of responsibility is still on LGBTI [sic] elders to straighten up their lives, and avoid upsetting other people.”

And here’s where the Royal Commission comes in:

The Royal Commission into Aged Care Quality and Safety was established in October last year, following thousands of submissions from older Australians, their families, health professionals and aged care providers.

It’s due to provide an interim report by October 31st.

The Silver Rainbow Project is undertaking a nation-wide consultation process, collecting stories from elders to submit to the Royal Commission. 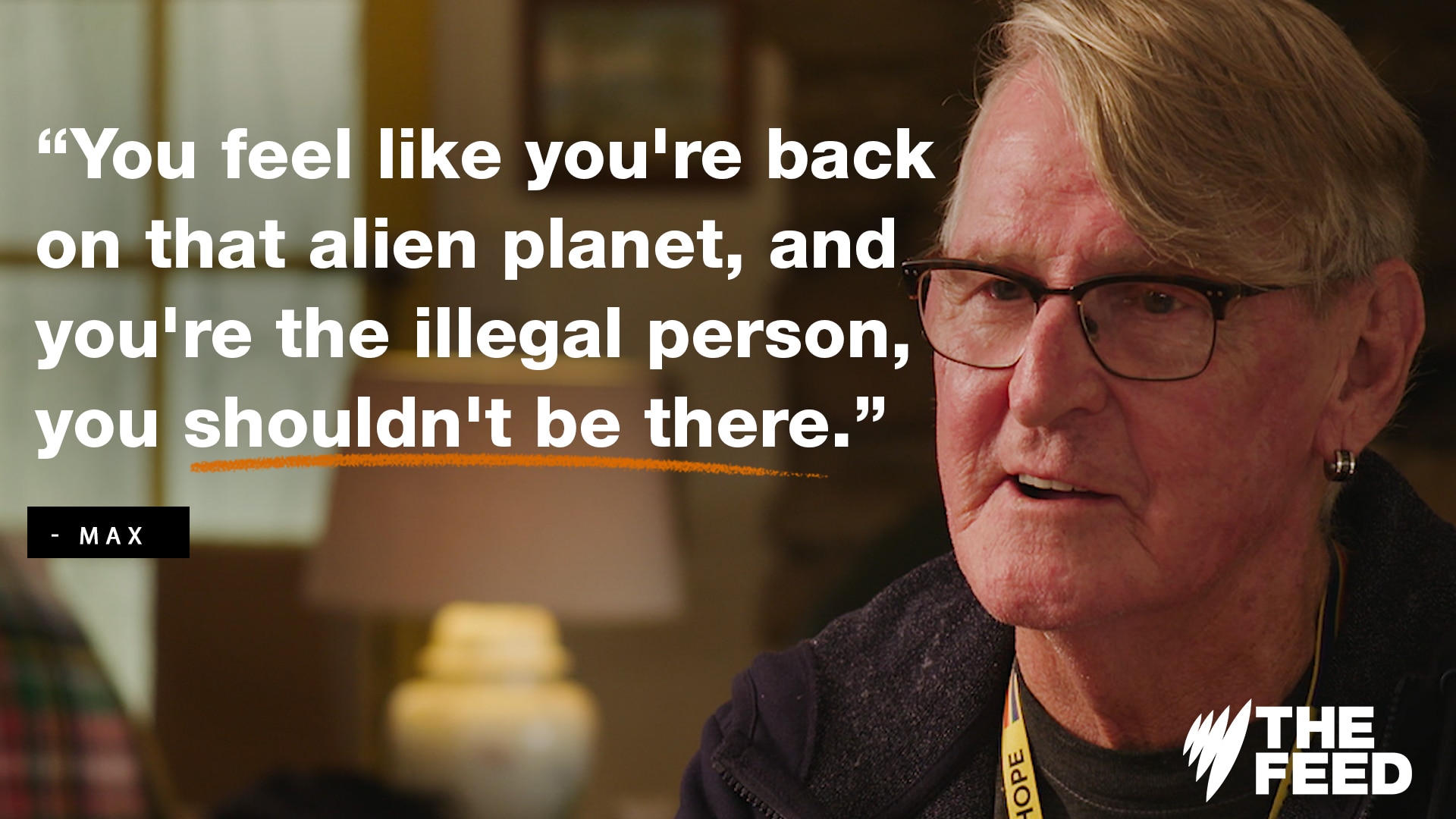 “LGBTI elders have had terrible experiences of discrimination historically; we need to recognise that.”

Malloy says the discrimination she’s faced brought her back to the six years of conversion therapy she endured in her youth.

You can't be who you are, just brought it all back to me.

“We've moved so far forward with marriage equality but there's just so many more we have to fight for.”

For those affected by this story: