Instagram has come under fire for ‘double standards’ after censoring a partially nude image of comedian Celeste Barber but keeping the original image of the model she parodied online. Experts say it’s definitely not the first time allegations of fatphobia and body-shaming have emerged on social media.

On Friday, she uploaded a semi-nude image of herself that parodied supermodel Candice Swanepoel, writing: “When you finally sit down and your kid asks for a drink”.

As reported by The Guardian, Instagram barred users from sharing the post, notifying some users that it “goes against our community guidelines on nudity or sexual activity”.

Barber hit back at Instagram, accusing them of body-shaming. The company later apologised to the comedian and said it was committed to addressing any inequality on the platform.

It’s not the first time that Instagram has been slammed for censoring women’s bodies. The company was criticised earlier this year for removing a partially topless image of plus-sized model Nyome Nicholas-Williams. The incident sparked the creation of a Change.org petition and the hashtag #IWantToSeeNyome.

In 2014, plus-size US woman Samm Newman posted an image on Instagram celebrating her body. Instagram responded at the time by removing the photo and banning Newman from the platform. 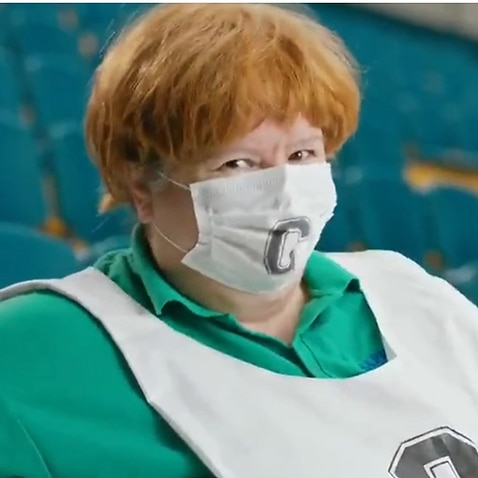 After appearing in a government ad promoting health messaging around COVID-19, Szubanski was targeted by the followers of former celebrity chef Pete Evans.

Evans claimed if celebrities like Szubanski wanted to help people they would “eat anti-inflammatory healthy food” and “get outdoors”.

“#fatshaming me & assertion that fat people have no place in discussion about public health not only insults me but also all the fat nurses, doctors, ambos etc who give so much,” Szubanski wrote on Twitter.

Dr Cat Pausé is a Fat Studies scholar at Massey University in New Zealand. She believes the censoring of Barber’s image is just the latest example of “fat-shaming”.

“This recent example with Celeste really illustrates the double standards since the image was her recreating an image that had already been in existence on Instagram with a non-fat model,” Dr Pausé told The Feed.

Dr Pausé said while Instagram has apologised for its “double standards”, it’s unfair and inaccurate to place blame solely on the algorithm.

“They hide behind the algorithm and AI,” she said.

“But what we know is that algorithms and AI are just as oppressive as people because they’re taught by people and get smarter by consuming all the material on the internet where people are being oppressive,” she said. Dr Pausé said Safiya Noble, the author of 'Algorithms of Oppression', has written about how algorithms can be racist.

“I’d argue we’ve also seen this be true for sizeism as well,” she said.

Dr Pausé believes the idea that “fat bodies are bad bodies” is embedded into the cultural psyche.

“We’re dealing with the disgust that most people feel when confronted with fat flesh. If that’s fat naked flesh, if we’re not causing erections it’s like, ‘what’s the point?’,” she added.

Deborah Lupton is a professor at the University of New South Wales’ and has written about fat-phobia and body-shaming.

Remembering back to a simpler time when we could all lie on a dirt pile in our undies and call it art. pic.twitter.com/O8Nc1xhnyD

Professor Lupton told The Feed that while she believes things are improving, “fat bodies” are still largely feared and stigmatised.

She said there was an intensification of anti-obesity discourse in the 1990s and early 2000s that aimed to make people “ashamed” of their bodies by talking about the “grabbable gut” and “toxic fat”.

“The headless fatty photo was very common in the peak fat-shaming period,” she added.

But she said public figures like Celeste Barber have “been quite pivotal in drawing attention to this kind of body-shaming and promoting body-positive messages.”

“That’s the source of her popularity,” she said.

“She contravenes body norms in a way that people can relate to.”