The piece, courtesy of visual artist Scott Marsh, depicts Folau as a well-to-do beggar leaning against a luxury sports car with a cardboard sign emblazoned with a remixed religious verse.

“The righteous shall taketh from the punters for the divinity of one's property portfolio is most sacred in the eyes of the lord, Amen!” the sign reads.

Folau is surrounded by an EFTPOS machine and a baseball cap filled with change.

Although only revealed in the early hours of Friday morning, fans of Marsh’s work might have predicted the Folau hit piece from a late-June tweet.

The anonymous artist Marsh is no stranger to sparking controversy. His 2017 piece depicting Tony Abbott and Cardinal George Pell as a bride and stripper was painted over by enraged locals just 24 hours after it was created.

“I was pretty aware of the relationship between Cardinal Pell and Abbott so I thought he’d make a pretty good subject as a male stripper.”

Some people didn’t like it but I thought it was fucking hilarious.

Folau has consistently stayed in headlines since his contract with Rugby Australia was terminated over a guideline breach related to homophobic Instagram posts.

The sports star turned to crowdfunding platform GoFundMe to raise money for legal costs for an unfair dismissal case but attracted outraged when he set his target amount at $3 million.

Many took issue with Folau crowdfunding for legal fees when his former annual salary is a reported $1 million and he holds a property portfolio worth more than $7 million.

GoFundMe responded to the backlash by taking the campaign down and refunding the 2,000+ people who had already donated.

The Australian Christian Lobby then picked up the campaign, hosting it on their official website and donating $100,000 towards the cause.

According to the ACL,  as of June 27th the campaign had reached over $2 million in donations from more than 20,000 people.

Folau and his lawyer met with Rugby Australia officials last week for a conciliation meeting but were unable to come to an agreement.

The former sports star is seeking $10 million in damages from Rugby Australia and wants his multimillion-dollar contract reinstated. 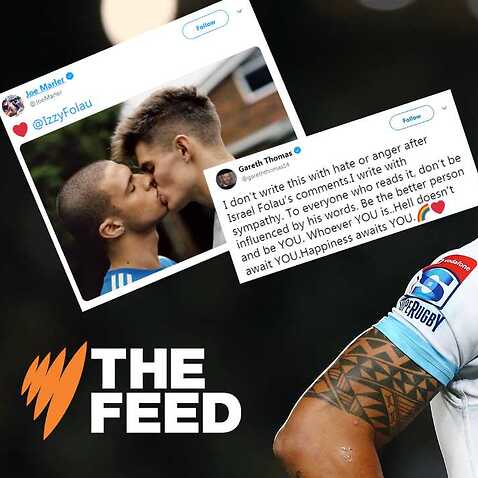 The Frant: What the Israel Folau thing is really about