A group in regional Victoria are fighting to save their land from being bulldozed to make way for a highway bypass.

A Djab Wurrung man has been camping out on the Western Highway in Victoria for more than a year to stop the destruction of an ancient landscape home to trees centuries old.

Zellanach Djab Mara’s fight initially focused on saving two birthing trees from being cut down - one which Elders say has seen fifty generations of Aboriginal women give birth inside its hollow. When that fight was won – after a series of negotiations with the local Aboriginal community and Eastern Maar Aboriginal Corporation - his sights turned to the land.

“A lot of our spirit is in this landscape, they're ours and they're our birth rite. They belong to us, we belong to them,” he said.

Today, Zellanach and a group calling themselves the Djab Wurrung Embassy are fighting a daily battle to ensure his country is not bulldozed for a bypass designed to reduce congestion and improve safety on the road.

He wasn't expecting to find himself camping on a highway in the chill of Victoria's winter. Twelve months ago Zellanach was working 9 to 5 in his own national business when he got the call that his ancestor's country was under threat.

"I spoke to senior Elder mum Sandra Onus and she um she pretty much put it on me that I, I was the one who had to stand up," he said.

"I just I took off and left and I haven't looked back since."

The trees are marked for removal to make way for an upgrade along a 12km stretch of the highway connecting Buangor to Ararat – the main road which also connects Melbourne to Adelaide.

According to the developer, Major Road Projects Victoria (MRPV), removing the trees is necessary for the upgrades.

"There have been more than 100 crashes on the Western Highway between Ballarat and Stawell in recent years, including 11 deaths and more than 50 serious injuries," a statement from MRPV Director of Development and Performance Andrew Williams reads.

But Zellanach's lawyer Michael Kennedy says those fatal crashes have not occurred on the 12km stretch of road the Djab Wurrung are fighting to protect. 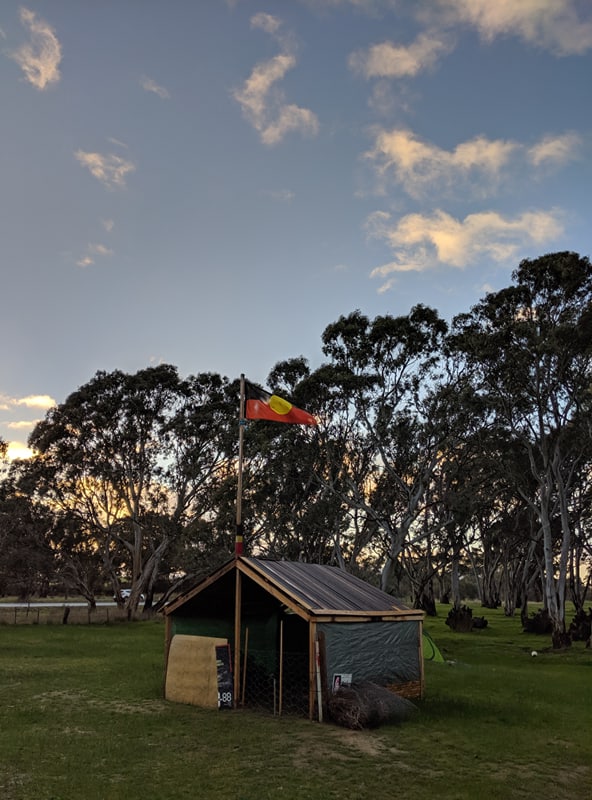 Zellanach and a group calling themselves the Djab Wurrung Embassy are fighting a daily battle to ensure his country is not bulldozed.
Supplied

15 trees to be saved

In a statement earlier this year, Major Road Projects Victoria said they have worked with the Eastern Maar Aboriginal Corporation - the group negotiating on behalf of traditional owners in the region – on a revised route of the Western Highway upgrade.

Former CEO of Eastern Maar Aboriginal Corporation Jamie Lowe said the changes will save a total of 15 trees.

"There was a deep community consultation process and recent meetings with Eastern Maar feel like the cultural threshold has been reached and the cultural heritage is going to be protected," Jamie said.

"We fought really hard to that and through our processes we've actually identified more culturally significant trees and we've actually managed to save them as well."

Zellanach and the Embassy say they support improving safety along the stretch of highway, but that more than 15 culturally significant trees can be saved.

"We've never been opposed to a, a highway as such. We're just opposing that particular 12 and a half kilometre stretch because it is very, very significant and culturally significant to our dreaming," Zellanach said.

Instead, they have pushed for an alternative "northern option". Zellanach's lawyer Michael Kennedy says that alignment would be cheaper, and cause far less damage.

"We've argued the northern option can be built cheaper, 60,000 truckloads less, faster, safer, does not involve truck movements on and off and it doesn't have the fragmentation," Michael said.

"So the cultural significance... if the northern option is built is minimal."

"This route would be less safe, have inferior access for the local community, poorer environmental outcomes, would cost more and would be very unlikely to meet planning and environmental requirements," a statement reads.

Michael Kennedy says the route MRPV refer to is an old 'northern alignment', different to the "northern option" which "basically hugs the highway". 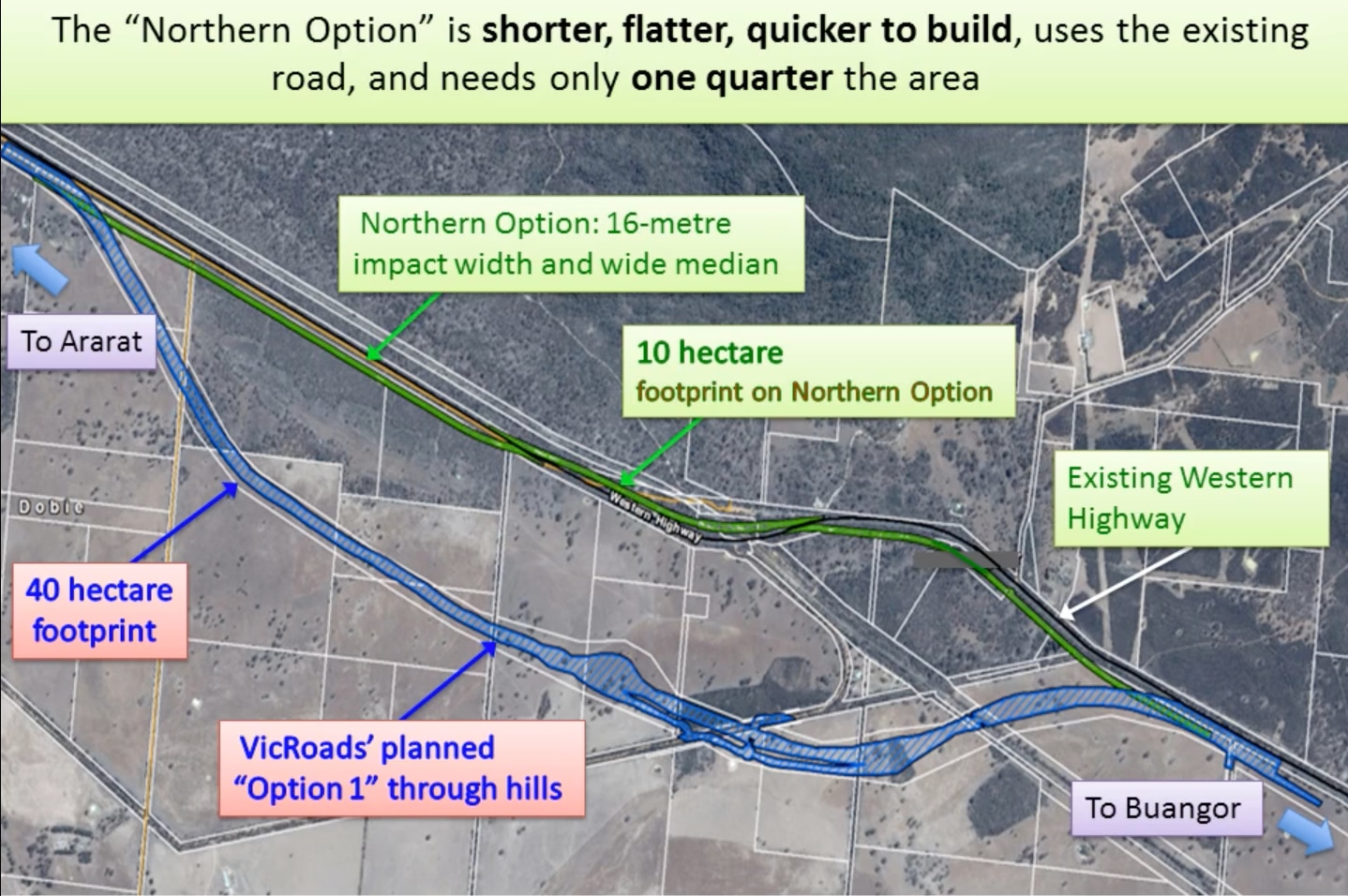 Zellanach and his lawyer have pushed for an alternate northern option that will save the culturally significant land.
Michael Kennedy

Minister to determine the fate of trees

Last year the Djab Wurrung Embassy appealed to the former Environment Minister Melissa Price to grant protection to the 12km stretch, using her powers under the Aboriginal and Torres Strait Islander Heritage Protection Act. The Minister conceded the area was "culturally significant" but declined protection on the basis of safety concerns.

In April this year her decision was squashed on appeal, because the Djab Wurrung Embassy had not been afforded procedural fairness and given the information upon which Minister Price made her decision.

The Feed requested an interview with Minister Ley, but her Department responded with a statement saying that she needed to be briefed on the issue before making a decision.

Zellanach says no matter the outcome he will continue protect the entire land area where the trees are.

“I've written out my Will. My kids know what's happening.” 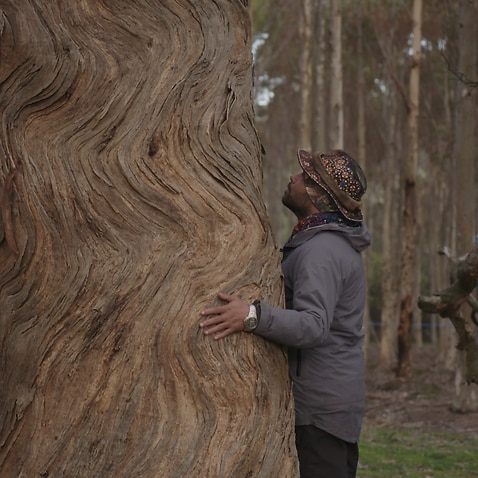