Pete Evans has denied knowledge of a neo-Nazi symbol, which appeared in a cartoon he shared on social media. It comes as several companies have cut ties with the controversial celebrity chef.

Pete Evans has claimed he had to google what "neo-Nazi" meant after public outcry over a 'Black Sun' symbol which appeared in a cartoon he shared on social media.

The celebrity chef posted a video with his horse onto Instagram on Tuesday afternoon and claimed recent media reports surrounding the controversy were "garbage" and "untrue".

"Just when you thought 2020 couldn't get any more bizarre, the mainstream media have just come out and labelled me a racist and neo-Nazi. The fact that I had to actually Google what neo-Nazi meant is pretty telling," he said.

"I just want to tell you this once and one time only. It is completely untrue, unfactual and a load of garbage." Earlier on Tuesday, Network 10 confirmed that celebrity chef Pete Evans has not been cast for this season of ‘I’m A Celebrity... Get Me Out Of Here.’

“Network 10 can confirm that Pete Evans will not be appearing on this season of I’m A Celebrity… Get Me Out Of Here!," a Network 10 spokesperson told The Feed.

TV BlackBox first reported that Mr Evans would be cast on the show on Monday. The entertainment site later claimed Network 10 had “fired” Mr Evans following his social media posts.

Network 10 did not confirm whether Mr Evans had been cast and subsequently dropped from the reality show surrounding growing controversy about his social media posts. Two weeks ago, Mr Evans responded to the rumours he’d appear on the show on Instagram, claiming: “all it would achieve is even more toxic discourse on Twitter and alike.”

It comes as several companies have appeared to distance themselves from Mr Evans after he shared a cartoon that supposedly incorporated a symbol associated with neo-Nazis.

The now-deleted post showed a cartoon of a butterfly with the ‘Black Sun’ symbol embedded inside its wings. The symbol was recently used in the manifesto of the Christchurch shooter.

“An oldie but a Goldie,” Mr Evans captioned the cartoon.

The celebrity chef later apologised to anyone who had “misinterpreted” the post.

“Sincere apologies to anyone who misinterpreted a previous post of a caterpillar and a butterfly having a chat over a drink and perceived that I was promoting hatred,” he wrote on social media.

“I look forward to studying all of the symbols that have ever existed and research them thoroughly before posting. Hopefully this symbol ❤️resonates deeply into the hearts of ALL!”

On Monday, book publisher Pan MacMillan told The Feed it’s in the process of "finalising" its contractual relationship with Mr Evans. However, the company did not respond to The Feed’s repeated questions about its motivation for doing so.

Raw C, Big W, Kmart, David Jones and Dymocks have also joined the growing list of companies that have disassociated themselves with Mr Evans.

A Kmart spokesperson told The Feed it would be removing Pete Evans' book titles from all Kmart and Target stores "effective immediately."

"The health and wellbeing of our customers and communities remains our number one priority. We will not condone or tolerate any form of discrimination or intolerance," the spokesperson said.

"Unfortunately, we feel that recent commentary made by Pete Evans does not reflect our brand values, which is why we have made the decision to remove these book titles from all Kmart and Target stores, effective immediately," they added.

Raw C, which previously produced coconut water ‘by Pete Evans’, told The Feed the company was “both horrified and saddened” by “anti-Semitic undertones” of Mr Evans’ post.

“This has been a pattern of behaviour By Mr Evans over the last year that has led to Natural Raw C taking steps to disassociate with him both personally and as a brand,” Raw C’s owner Scott Mendelsohn said.

“This process has been reflected in our renewed branding across our product lines and removal of any social media associations,” he added.

We are in the process of removing his books from our website and have advised our stores to return their stock as offered by the publisher. Thank you

Mr Mendelsohn added that Raw C would take immediate action to “fast track any remaining references that may cause any further hurt or impact to our Raw C community.”

Dymocks also confirmed on Twitter on Monday that it’s “in the process of removing his books from our website and have advised our stores to return their stock as offered by the publisher."

While a Big W spokesperson told The Feed it would be removing Mr Evans’ “book titles” from its stores from November 17.

“We take our customer's feedback very seriously and review our range of books regularly to ensure they are aligned with BIG W's family values,” the company said.

“Following Pete Evans' inappropriate comments on social media, we have decided to remove his book titles from our range from the 17th November.” 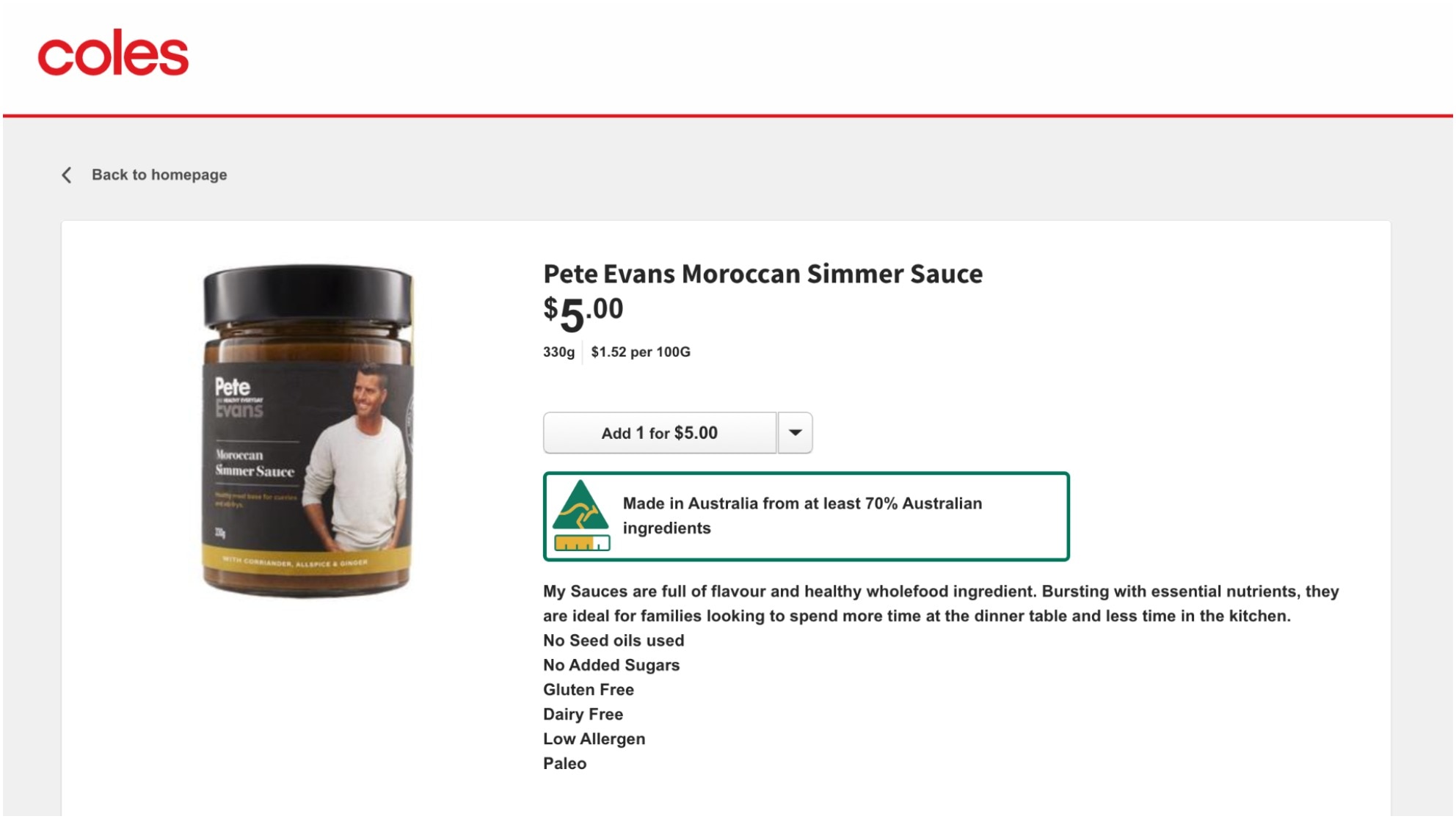 Screenshot of Coles selling a Pete Evans product on its website.
Coles

David Jones has also committed to removing Pete Evans’ titles from its stores.

“David Jones does not support or in any way endorse the comments made by Pete Evans and we will be no longer be stocking Pete Evans titles effective today, November 17 2020,” a spokesperson told The Feed.

“All stock of these titles will be returned to the publisher Pan Macmillan in line with the arrangements they have announced.”

A Coles spokesperson told The Feed while it doesn’t have a direct business relationship with the chef, “we currently stock a small number of products from suppliers who have licensing agreements with him.”

“We have spoken to these suppliers who share our concerns regarding recent statements made by Mr Evans and are in discussions regarding the removal of these products from our range,” the spokesperson added.

“Coles is committed to providing a safe and inclusive environment in which to work and shop.” In November, Queensland Health issued a recall for a Jamaican simmer sauce from the chef’s paleo-friendly range after incorrect labelling sparked fears of undeclared allergens.

Earlier on Tuesday, Coles was inundated with comments about Pete Evans on its Facebook page.

“Hi Coles, how is Pete Evans compliant with your ethical sourcing policy? Particularly in regard to discrimination and business integrity?,” one person wrote.

“At what point Coles does your commercial support of Pete Evans become a concern to you? This customer no longer steps foot in your stores, and will continue to advocate others do the same,” another added.

“HOUSE® has recently been made aware of social media posts and comments by Mr Pete Evans which are completely contrary to our values,” the company wrote on Instagram.

“In our view, the images and views expressed by Mr Evans are reprehensible, unacceptable and offensive. HOUSE® will immediately remove the Pete Evans branded products online and will be discontinuing the range in store.”

The Feed has also contacted Kmart and David Jones, which stock Mr Evans’ cookbooks, for comment.

He has also shared several memes which called into question the accuracy of voting numbers in the US election. The recent election was considered the “most secure in American history”, according to a coalition of federal and state officials.

The celebrity chef was fined more than $25,000 by the Therapeutic Goods Administration in April after he claimed a BioCharger device had magical coronavirus eradication in a Facebook lifestream promotion.