A new study has found 80 per cent of Australians believe social media can influence a person’s opinions and their future behaviour. The timing of the report comes right in the middle of a big public conversation about the ethics of how social media platforms are operating.

Pax Teng is afraid he is being shaped by his social media feeds. It's a worry that's shared by a number of people, according to a new study by Australian research organisation Almeida Insights.

"I tried to uninstall the whole thing and for a month, and it helped me with sorting my own stuff," Pax told The Feed.

"But I realised I still need to go back and watch the news. So I don't have a platform. And Facebook's literally my medium to watch news."

Pax longs for the days before our social feeds were re-organised by algorithms trying to keep our attention on apps. He remembers the early days on Facebook when he'd see the latest news or posts -- but now he's concerned about what the platform's changes may do to him.

"I don't want like an algorithm or [social] media platform to shape my views. And just keep feeding me what I seem to be interested in reading."

The report found almost 80 per cent of Australians believe social media has the ability to influence a person’s opinions, perspectives and future behaviour.

“The volumetric attacks on Nyadol Nyuon ... as well as Magda Szubanski in the wake of her public service announcements around wearing COVID masks - were all coordinated right-wing extremist attacks,” eSafety commissioner Julie Inman Grant said. 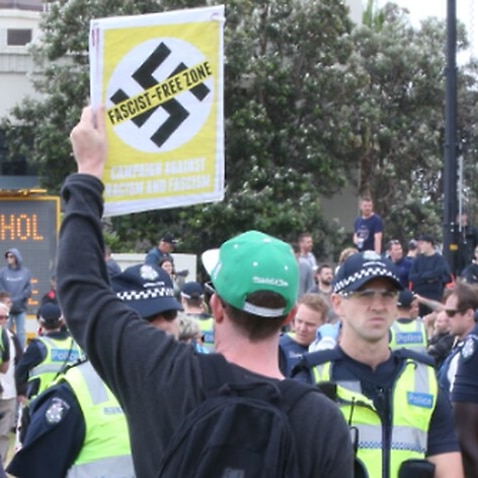 Alice Almeida is a researcher and founder of Almeida Insights. She said despite the large proportion of participants believing social media has the power to influence users, a lot of them believed they were the exception.

"So in this scenario, a lot of people were thinking, I know that this goes on on social media, but it won't happen to me because I'm too smart for that."

However, Almeida believes that social media algorithms have become so intelligent that they are able to subtly shift the opinions of users without them realising.

Luke Renton believes he is one of the exceptions in the rule, despite acknowledging people can be swayed on social media -- he doesn't think he'll be one of those people.

"I think part of it is a bit scary. Especially when you're talking about radicalisation," Luke told The Feed.

"But it is an awareness thing and taking it all with a pinch of salt. It is hard to stop yourself scrolling...and I think there does need to be more education around when to stop or when to kind of know that you're gonna head down that rabbit hole."

Almeida says they found in their research despite people under 35 having an awareness of what may be happening with their data, however, there was a lack of care.

"When we delve a little bit deeper into that the lack of care was based on an incorrect knowledge base, or a limited knowledge base," Almeida told The Feed.

She says in her research she found younger people were resigned to having their data taken, because this is the price to pay to engage in social networks.

"So they can have my data, I have nothing to hide," Almeida explained.

Almeida was frustrated by the lack of conversation surrounding the thoughts of users when it comes to the discussion of tech companies in recent months.

"What is their knowledge base? Given the user's data that's in question here, it's the use of data, which is providing the social media platform with a significant amount of revenue, that kind of way you need to focus on first."

Can social media influence you?

Dr Jonathan Hutchinson is a senior lecturer in online communication and media at the University of Sydney. He doesn't think social media is much different to previous mass-media, and says what we need is to better understand and regulate the medium.

"This is the kind of information cycle which is similar to television, which is similar to the radio all of these media technologies have this way of broadcasting or picking up an area of interest or topic and pushing it to mass audiences," Dr Hutchinson told The Feed.

"And we're just seeing the new form with social media. So there are a few different types of players in action here with this particular form of media, which is different to all the others. And that's the area that I think we should be focusing on."

Dr Hutchinson thinks there may be a hint of hyperbole in the recent documentaries that have been released about the impact of social media on its users.

"Something like the Social Dilemma is potentially hyperbolic in that itself is a media product. So it's trying to gather an audience and push a message and do the usual thing that media products do," he said.

"But at the same time, it does make an interesting point around how social media companies have been harvesting data and using people's privacy illegitimately.

"It's incredibly important that people don't suddenly switch all their social media off and start wearing tin hats. It's not that huge sort of moral panic that we need to look at. It's more of a listen, understand, and then react accordingly."

She agrees with Dr Hutchinson.

"It's definitely a worry. But I also think we need to keep things in perspective. Social media is just a technology like the phone," Dr Smith said.

"I think we need to be careful of just taking away people's agency and just sort of assuming that if they come across any content online, that that is the same as being influenced by it."

However, in recent months both social media companies and federal government agencies have been more vocal about the rise of far-right extremist groups.

Dr Smith believes it's not as simple as being influenced by these groups, she said it's a two-way street, "People are also actively seeking out and engaging with this type of material."

She’s worked on research mapping the rise of the far-right, and their interactions online. Dr Smith says far-right social media spaces don’t operate as we may imagine.

“They can be places that are joyful and places that are sociable and places where you can hang around with people with shared values. And so for the person who's engaging in it, it's not necessarily a negative experience,” she said.

“That kind of sits in tension with the underlying, quite hateful and harmful message that sits at that, at the heart of far-right extremism.”