A star acrobat who was once a poster boy for Cirque du Soleil, is now preparing to sue the company, alleging negligence by failing to provide a safe workplace. Daniel Crispin says he has been in an endless battle to have his work-related spinal injuries covered by insurance. After years of feeling pressured by Cirque du Soleil to stay quiet, he is speaking out.

A star acrobat who was once a poster boy for Cirque du Soleil is now preparing to sue the company, after being left to foot the bill for multiple spinal operations and procedures.

32-year-old Daniel Crispin worked for Cirque du Soleil between 2015 and 2017 as a principal character and soloist in the record-breaking arena show Toruk - The First Flight, a production inspired by James Cameron's Avatar.

Nominated for Australian of the Year twice, Daniel had been working towards that goal for more than a decade. He says at first, travelling the world and performing with the company was everything he could have hoped for.

"It gave me the opportunity to have just the most incredible life that most people would never dream of," he told The Feed. "I felt like I was in The Hunger Games"

But Daniel says behind the scenes Cirque du Soleil was a mess.

It started with sprained and broken ankles.

"The set around the edges was made to look like grey rocks...They were kind of just velcroed so if you stepped in the wrong spot or if the air mat wasn't blown up properly, you would just go through it," he said.

"It was very easy for you to just lose an ankle during that." 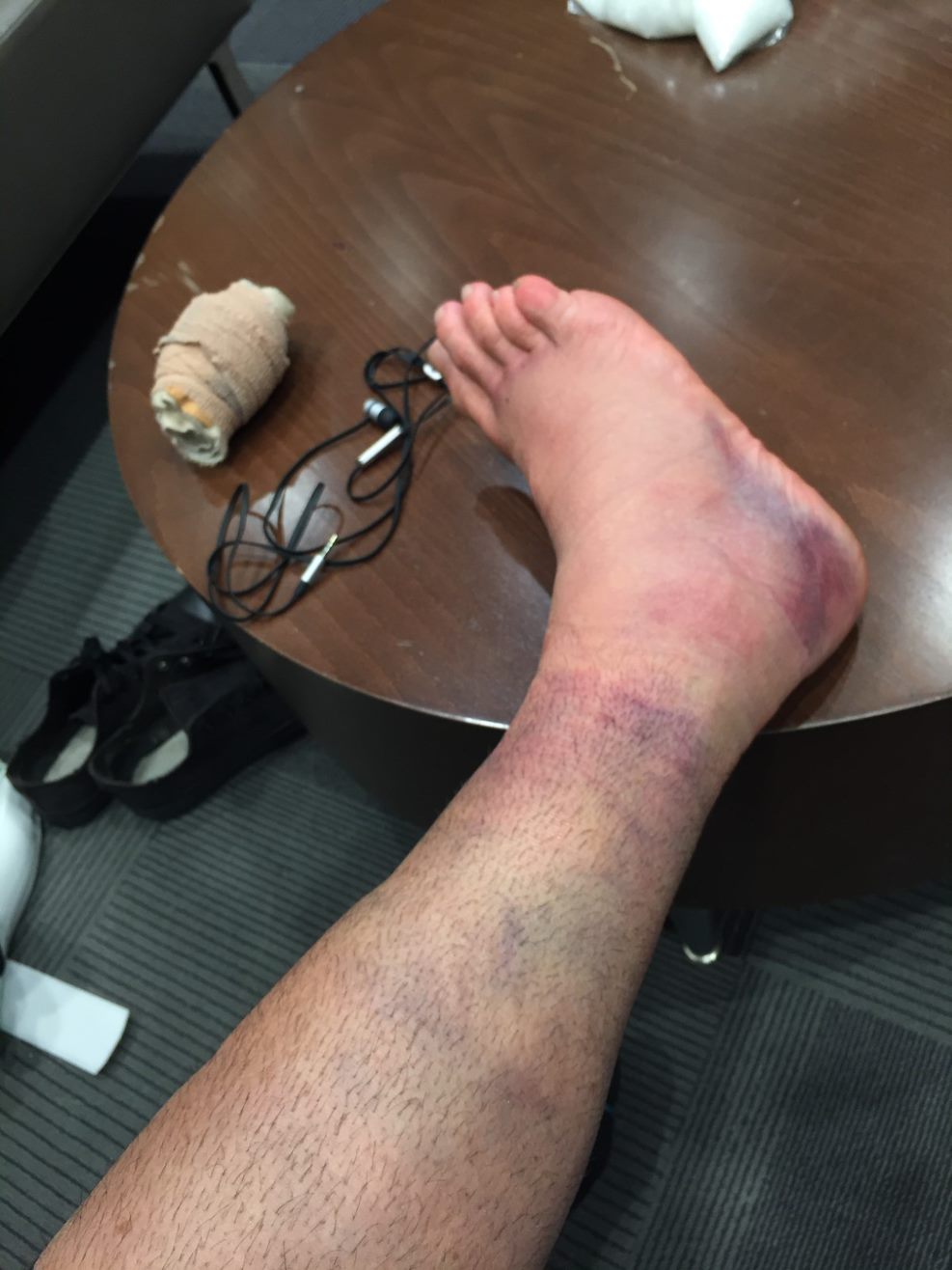 But the accidents got more serious. Daniel later sustained a traumatic brain injury from three concussions in the space of two weeks. Daniel alleges two of the concussions happened during the same show as a result of faults by another performer. He took a two week break. But after his first show back, he blacked out at home in the early hours of the morning and hit his head again.

Despite that, Daniel says he was cleared to perform the same day in the ensemble.

"I'd go on stage and I just didn't know what direction I was, it was the weirdest feeling because I'd done the show hundreds of times but I couldn't orientate myself," he said. Daniel says Cirque du Soleil did not have his head or neck scanned and claimed the company later directed him to delete any videos he had of the knocks. Cirque du Soleil initially declined to send footage to Daniel's doctors, requesting more time and incident dates to be specified.

But he was given more time off to get better.

"By the end of the run I felt like I was in the Hunger Games and I just remember the start of each show saying to myself, 'just get through,'" Daniel said.

"It's not going to make it worse"

After a gruelling recovery process that took months, Daniel was reintegrated into the show. After his return, he says a whiplash incident left him dazed and unsure if he could finish the show. Daniel claims he was later berated for not being able to communicate his capability to finish clearly enough. Then new issues began plaguing him. His bicep and hip were in chronic pain, he couldn't feel his fingers and his leg was giving way at random, causing him to fall. He was taking painkillers after every show.

"It just felt like a melting pot of hurt...And I'd been logging all this at work and they kept saying 'it's just neural tension, it's tightness in your neck, it's tightness here that's why it's getting numb,'" he said.

"I got told [by Cirque du Soleil] it's not going to make it any worse if I keep going," he said. Daniel did keep going and it did get worse. He says he wanted to make it home for the Brisbane show so his family and friends, particularly his dad, could see him perform.

"My dad was hearing impaired like profoundly deaf his whole life so for him to be able to see me perform for the first time as the main character in a show that's visually appealing, I wasn't going to get that chance again because his cancer was pretty bad and while he'd defied the doctors by 10 years, his time was running out."

His dad died months after seeing him in Toruk in Brisbane in 2017. That show was Daniel's last. Daniel with his father in his final show.
Supplied

"One of the worst things as an acrobat that you can imagine," said David Carberry, Daniel's friend.

"Not even being able to respond to someone calling his name without hesitation or walk without pain was quite upsetting," she said.

Cirque du Soleil paid for Daniel's first lumbar spinal surgery in 2017 and some associated rehab, but that was it.

"It was almost like the carnival model of business where they pulled up stumps and then... just vanished," Daniel said.

He says he has since had at least seven operations and procedures for his spine as well as continuous rehab, most of which he's paid for himself.

Daniel in physiotherapy recovering from his injuries.
Supplied

Despite Daniel's repeated pleas, Cirque du Soleil refused to acknowledge that his spinal injuries came from his time with the company. He was told 'no specific accidental event was reported' in relation to his pain and injuries.

That's made it difficult - and at times impossible - for him to claim insurance or get compensation.

"[The symptoms were] legs not working, incontinence issues, can't feel my hand, I walk with a limp and [Cirque du Soleil are] just like, it's between you and the insurer," he said.

However, in a general statement, Cirque du Soleil says it provides the highest level of medical care and support available to its artists, who are also provided with injury risk reduction strategies, strength and conditioning support and other training adjuncts. The statement added artists also have support with specialist care or injury rehabilitation for the duration of their contracts.

"If an artist requires medical support for a work-related injury, they continue to receive this care through our third party insurance administrators, who make decisions on whether care is required or not based on independent medical doctor recommendations, and therefore removed from Cirque du Soleil influence," the company said. An x-ray of Daniel's neck.
Supplied

After being contacted by The Feed in April, one insurer, Cigna, reimbursed Daniel just under $5,000 for claims related to his first lumbar surgery in 2017. But it would not comment on the matter.

Liberty Mutual, the insurer that denied Daniel's claims for costs related to his upper spine and bicep injuries told The Feed it does not publicly discuss individual claims.

She says Daniel was the most elite athlete she'd come across and his injuries were among the worst she'd seen.

"I think that most people that have those types of injuries at the level...would probably not return to the level of sport that they were at," she told The Feed.

But Dorothy Hawkins says Daniel is not a "lay down and lie" kind of person.

"He's just got so much strength of character and mental toughness that I thought, 'no matter what happens he's going to try and come back.'" Daniel in the C!RCA training space.
The Feed

And for a long time, Daniel's recovery was defying his rehab team's best expectations. He even returned to working as a primary school teacher and circus coach.

But Daniel was recently dealt a major blow. Doctors told him he needs to have his lumbar spine fused. Despite the surgery being categorised as an emergency by Daniel's doctors, he was forced to wait nearly two months for icare (the service that replaced WorkCover NSW) to independently assess and approve the operation. icare told The Feed once it was made aware of Daniel's situation it contacted its claims management service provider, EML, to follow up on the matter.

But Daniel says he was falling apart during the delay. He had to start taking opiods and using a walking stick again.

"It's like drowning in a swimming pool and everyone is standing around with a life raft. I'm asking if I can have one and they say 'hold on we need another meeting' and I continue drowning."

"I got off the physio table and I just said it wasn't worth it. Dorthy said 'what do you mean?' I said that lifestyle, the whole career wasn't worth it because this is just hell."

Daniel says he may never return to the stage.

"You've got to have hope but I don't foresee that as a possibility. I want to, but sometimes want isn't enough," he said.

Daniel has now been in recovery for longer than he performed with Cirque du Soleil.

He says he is out of pocket up to $100,000 from medical expenses, home modifications and lost wages. He is now preparing to sue Cirque du Soleil.

"I paid for my medical insurance out of my own wage. It was explicitly told to me and I have it in writing and recording that I'm going to be looked after for my show conditions and the injuries that happened in the show," he said.

"I don't want anything other than what was agreed upon and I don't think that that's too much to ask. I went into a show that physically maimed me." Daniel taking a selfie with his walking stick.
Supplied

"When you're at that level it's all about pushing yourself and pushing your limits," he said.

But he adds it was Cirque du Soleil's responsibility to moderate that.

Mr Chrara alleges the environment was one where performers were dispensable and not inclined to reveal any weaknesses.

"Because if someone comes in and takes your spot, performs better and has an ability to continue in that, then you lose your spot."

He says Daniel's case could set a precedent for big companies like Cirque du Soleil.

"I believe it should. Fundamentally what we want to do is ensure the safety of all performers, irrespective of whatever jurisdiction they're in... and to avoid this from happening to the next person."

Daniel says he had always felt pressured to keep quiet because of confidentiality clauses in contracts and emails from the company.

"But I think it's an important conversation...and I think it adds a lot of value to the industry. I don't think that it should be something that's hidden," he said.

"I know there is going to be a fall out from this. And that's ok because this is important for people to see and it's not OK to harass and bully and dispose of people.

"Sometimes you've just got to say something."