There have been five mass extinctions in the history of time. Extinction is “as normal as death.” But is that also the case with the sixth mass extinction we’re living through? The Feed’s Alice Matthews investigates ‘The Case’ for Extinction Anxiety.

More than 99 percent of all the life that has ever existed on the face of this planet has gone extinct.

About 440 million years ago, the Ordovician-Silurian extinction - otherwise known as the ice age - saw 85 percent of life wiped from earth. The fifth, and perhaps most well-known mass extinction happened when an asteroid collided into the earth killing more than three quarters of plants and species, including the dinosaurs.

We humans are now living through -- and causing -- the sixth mass extinctions.

So should we be seriously worried? And should we be saving endangered species? Or is mass extinction actually normal in the context of the history of time?

This week on The Case we’re looking at the three things we need to understand when it comes to mass extinctions: how fast they happen, the reasons behind them, and the impact they have on the planet.

How fast they happen

Here are the five mass extinctions that came before us: 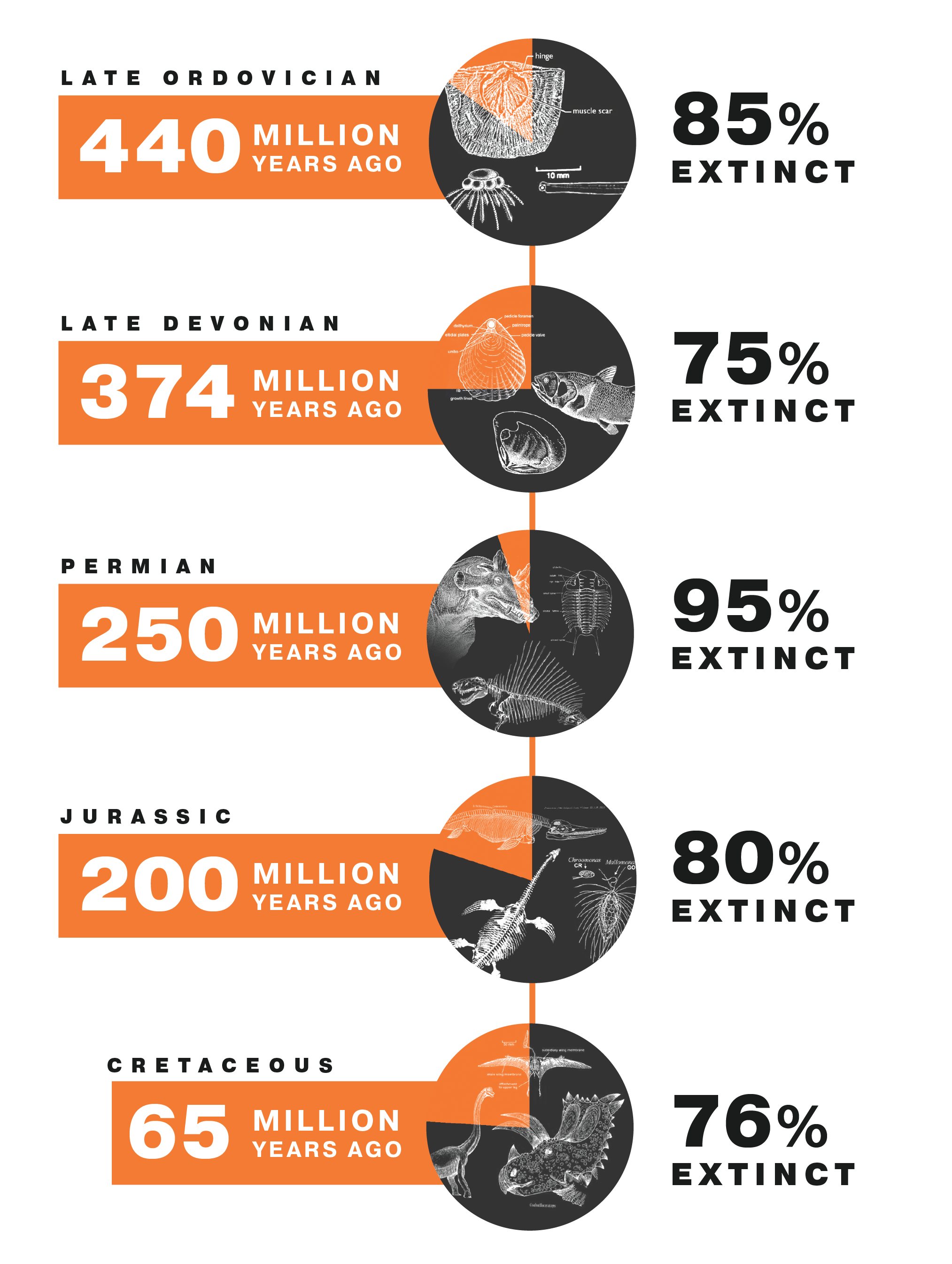 The causes range from the Late Ordovician ice age to the Jurrasic period's rising CO2 concentration. In the worst mass extinction event of our time, it's thought an asteroid impact may have created acid rain, wiping out the vast majority of life, which at the time was in the ocean. The dinosaurs were also wiped out in the fifth of these events (Cretaceous) after an asteroid crashed into earth.

"The main impact of course was the pulverisation of this massive rock into that planet that blotted out the sun and vapourised species for thousands of kilometres," Professor Corey Bradshaw said, an ecologist from Flinders University.

He defines mass extinction as at least 75 percent of species being wiped out across a timespan of about two to three million years. Which sounds like ages, but really is no time at all in the context of earth’s four and half billion years.

“Extinction is as normal as death,” Prof Bradshaw told The Feed.

Yet the world collectively spends billions trying to keep endangered species alive. Vulnerable “charismatic megafauna” like polar bears, orangutans and whales may get a lot of attention but Prof Bradshaw says a lot of extinctions go unnoticed.

“Most of the extinctions that have happened since we’ve been around are actually parasites,” he said.

He adds extinction also opens up opportunities for other species to evolve, replacing the ones that became extinct.

Life, rising from the ashes like a phoenix. How significant is it that we’re amid another mass extinction?

It’s what happens between mass extinctions that helps scientists determine what the ‘normal’ rate is. Judging from the fossil record, scientists think we humans have sped up the normal extinction rate by anywhere from 10 to 10,000 times.

“We potentially will be losing the equivalent of a mass extinction event in hundreds of years [instead of millions], which is unprecedented in the history of life on the planet, “ Prof Bradshaw said.

We’re now losing species too quickly for new ones to evolve at the same rate. There are no longer enough phoenixes rising from the extinction ashes.

The reason for that?

You can probably guess.

Habitat loss is the principal driver of extinction and endangerment. There’s also things like chemical pollution and invasive species.

But almost half of the earth’s land has been bulldozed just to feed us. In fact, it takes a land mass bigger than China to grow the food that we ultimately end up throwing away each year.

We are a population of about seven million right now, and growing. Demand for food could double by 2050 .

Prof Bradshaw says the damage from exploiting forests and seas is exacerbated when you throw in climate change.

“When you add heating to a vastly degraded system, it’s ten times the effect. You’ve hit the knockout punch,” he said.

What is the impact of losing a single species?

Dr Elizabeth Boakes is a conservation biologist from University College of London specialising in the impacts of agricultural trade on biodiversity.

She says each species that's knocked out makes it more likely that all the species around it will also die out.

"If we lose a group of species, we lose their function as part of an ecosystem, which makes it likely to collapse," she told The Feed.

"Like if there was a disease that only targets medical professionals, that would be far more damaging that one that targeted people at random."

Dr Boakes says if we continue on the path we're treading there will be "massive ecosystem collapse."
"Life as we know it won't be able to continue," she said.

Professor Bradshaw agrees, "Are we going to go extinct? No. But is our way of living and lifestyle going to be degraded? Absolutely."

He adds it's a burden of knowledge that makes you want to curl up in bed with a book and a cocktail and never leave.

"It's a very personal thing, there isn't a scientist I know in my field that isn't affected psychologically by this."

We humans are causing an extinction event that only asteroids and ice ages can match. We can’t reverse it, but we can lessen the impact.

Globally we spend about $33 billion dollars a year on conservation, which is nothing compared to the trillions that countries will spend recovering from COVID-19.

So should we all be doing more to slow down the extinction rate and save species? Absolutely.

And should we be anxious about doing that? Absolutely.