When a family returned home after their community in Bega Valley was devastated by fires, they thought they’d lost their pet cat to the blaze. But then an Angel appeared.

Ben Symonds’ step-father chose their family cat Angel from a litter of rescued kittens - or rather, as Ben tells it, Angel chose him.

“When he walked into the room, Angel went right up to him and sat on his lap and that was it. They’ve been inseparable ever since,” Ben told The Feed.

When Ben’s family home near Bega Valley was in the path of the devastating bushfires just before New Year’s, the family tried desperately to gather all their animals, including Angel, for evacuation.

“Partway through packing we started to see the fire come over the top of the hill, then the fire was behind us. Suddenly there were fires all around us, all of our paddocks were on fire,” said Ben. Ben and Mum Jeannette during the fires.
Supplied

“We were tearing around, chucking stuff in the car, the horses were going crazy, the dogs were going off, it was all so chaotic. We grab the last of our stuff ready to go and as we do this we see the cats sprint into the bush.”

Despite Ben’s stepfather, Brett ‘Pixie’ Graham, calling out to cats Angel and Micky, the family had run out of time as the fire closed in on their property. They had to leave them behind.

We drove out and the world was coming down around us. Everything was on fire, smoke so bad you couldn’t see, we were driving through flames.

After getting the family, their four horses and two dogs to safety at a nearby showgrounds, Ben and Brett made the decision to go back to the property to try and fight for their home.

However, police stopped the pair and told them that the road back into their property was now on fire.

“We tried to talk to them to say our cats are there, our house is there, but they didn’t let us through,” Ben said.

After several hours of hand wringing and pacing, Ben and Brett travelled back to their property through backroads.

“We got into our driveway and we’re pretty sure our house is gone. Everything was on fire, the trees, fences, everything. We were convinced we had lost it all,” Ben said.

A fallen tree over the driveway forced the pair to make the rest of the trek on foot.

As soon as we saw those lights, we knew the house was ok we were absolutely over the moon.

Stunned as to how all of the bushland surrounding the house could be burnt out but the house remained untouched, Ben chalked it up to the volunteer firies that were monitoring the areas.

“The fire had completely come up to the house but the firies had sent a chopper or a plane and bombed our house to save it. Then they got the trucks in and ran a perimeter and just kept it away until it went down,” Ben said.

Ben and his step-dad spent the next 48 hours fighting ember fires that sprung up around the property before it was clear enough for the family to return.

“At this stage we hadn’t seen the cats, we’d been calling and calling. The fire had been so hot that there wasn’t even logs left, there was just orange outlines where the trees had been. There wasn’t even ash,” said Ben.

“We thought even if [the cats] had gone down a wombat hole, the chances of them surviving were tentative.”

Then, a week after the fires, against all odds, an Angel appeared.

We all saw her at the same time and we’re all screaming “Oh my god, Angel’s alive!”

Angel, who normally has a thick, fluffy white coat and bright blue eyes, was virtually unrecognisable. 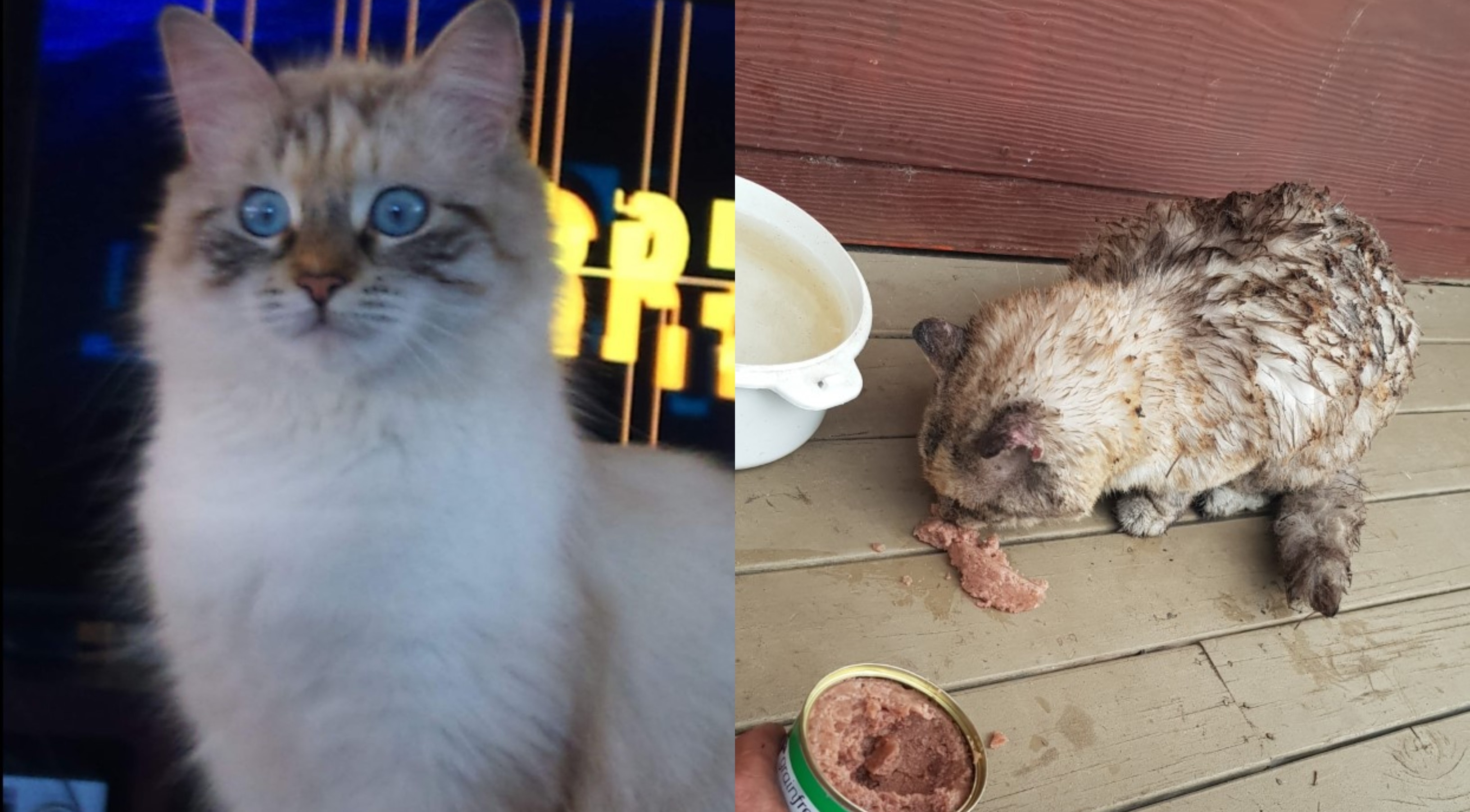 Angel before (L) and after (R) surviving the fires.
Supplied

“Her fur had just melted into what looked like blobs of plastic and her ears were all burnt and bent over, by some miracle her feet were not burnt,” he said.

“We took her inside straight away and gave her food and water. My step-dad spent the whole night cuddling her ‘cause that’s his baby.”

Brett (L) and Ben (R) with Angel after she came home.
Supplied

Ben said Angel’s return helped lift his stepdad out of a dark place post-fires - his Mum described it as “the apocalypse lifting.”

We had been living in a black and orange world and suddenly the rains had come, the fire had dissipated and Angel had come home. It was an amazing feeling.

Angel is now safe and sound at home, soaking up all the cuddles she can get, “I don’t think she’s had a second alone since she came back,” laughs Ben.

Brett with his "baby" Angel.
Supplied

Wanting to spread the good news, Ben posted Angel’s story on Reddit, where it quickly racked up over 47,000 upvotes. Comments flooded in from all over the world.

“We had people messaging saying that they would pay for vet bills and people from California who have had pets go through fires giving advice on what to do,” Ben says.

“It’s been overwhelming, really. We just sat there and read through the comments until 2am in the morning, Mum had tears in her eyes the whole time. My step-dad was just glowing.”

As fires continue to create destruction across the country, Ben wants people to recognise the true heroes of this story.

“The men and women who saved our home, who are out there in just the most horrific conditions while also worrying about their own homes and not getting paid,” he said

We have a house because of their sacrifice.

While not everyone can physically fight the fires, there are ways to help those suffering.

“What really broke my heart is that when we see them, half of them don’t have proper gear. They’re wearing paper breathing makes instead of proper equipment that will protect their lungs and eyes,” Ben said.

“Donate to these people, get them their supplies because they need it and they’re heroes.”