84-year-old Fred Nile of the Christian Democratic Party is facing a challenge from an 18-year-old party member.

The Christian Democratic Party (CDP) in NSW is moving forward with its current board despite a vote of no confidence being moved against them in the last state council meeting.

The motion was introduced by 18-year-old Samraat Joshua Grewal, president of the Christian Youth wing of the party - he believes the CDP is due for a complete overhaul.

CDP state president Ross Clifford disagreed, ruling the motion out of order. The meeting was subsequently adjourned due to a lack of order in the room.

“He was just too young,” said Fred Nile the CDP's 84-year-old leader.

“That’s not me saying that. That’s all the other party members saying that who are in their 30s and 40s, married, with children and so on, saying 'well we can’t have an eighteen year old telling us how to run the party'”.

Despite the board all but ignoring Grewal's attempted shake-up, he's not giving up on his political upheaval.

“This is a humiliating moment for the party,” Grewal told The Feed.

“The old board is unwilling to accept the result of the state council vote. We have it on good legal advice that confirms the actions that we took.

They’re living in denial. Ross Clifford is desperately hanging on to power and each day he is continuing to prove himself as a person who is unfit to lead.

However, according to Ross, the party agent and the board reviewed the incident and agreed that council meetings adjournment was an appropriate action.

“It’s our obligation to continue as a party,” Clifford explained to The Feed.

“The only thing that could stop that would be a court order and we certainly don’t anticipate a court injunction.”

Ross is confident in the board’s position and will hold a membership meeting in July.

He wasn’t prepared to make a comment on what he and the board would do if a second vote of no confidence is made against them at the upcoming state council meeting in August.

Clifford did reach out to Grewal to ‘allow him to air out his grievances’.

But Grewal refused, instead posting the correspondence on his Facebook page. 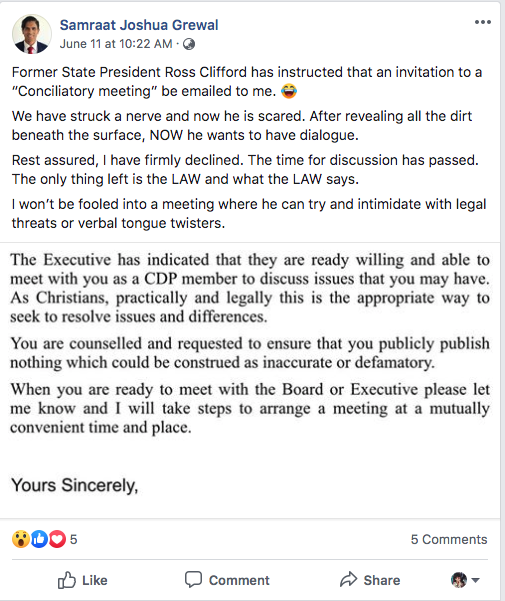 Former CDP President has not only been bullying members of my party, but even staff in the college of which he is Principal. How appalling. He should resign from both immiediatly before things escalate! pic.twitter.com/TNuq2CBUzd

“He’s turned this into a personal attack, with cheap shots and name calling," Clifford said.

If that’s how he wants to do things, in a Christian environment, he’s probably not in the right party. You don’t attack the person, you attack the issues.

A mediation between the young “interim board” and the current board has proved difficult. Craig Hall, state director of the Christian Democratic Party managed to meet with Grewal last week but they were unable to come to a resolution.

Grewal's friend and supporter 22-year-old Joel Jammal hopes that whatever the outcome of Grewal's stalemate with the Party is, his actions will propel the party towards future success.

"This was a move to reform the party, to bring it into the 21st century," Jammal told The Feed.

We may be losing the battle but we will win the war.