The Feed spoke to four African-Australians who could make history as in the upcoming local council election. They are running in the wake of the hard lockdown of the public housing towers in Melbourne. The message from them is clear: they want a seat at the decision-making table.

The hard lockdown of Melbourne's nine public housing towers in Flemington and North Melbourne has had a deep effect on many. But there's one outcome no-one saw coming: it's pushed members of the city's African community to put their hands up in the political spectrum.

And it's potentially groundbreaking. The only recorded African-Australian local councillor is Sam Aziz, who is Egyptian-Australian. There's no record of Victoria ever having sub-Saharan African representation in local government.

A cohort of candidates are hoping to buck that trend - and recent events have cemented political ambitions.

"I volunteered down in North Melbourne and Flemington [during the hard lockdown]," council hopeful Mohamed Semra told The Feed.

"[I saw] this lack of cultural awareness. You had decision-makers that didn't represent or weren't a reflection of the people that they were serving." 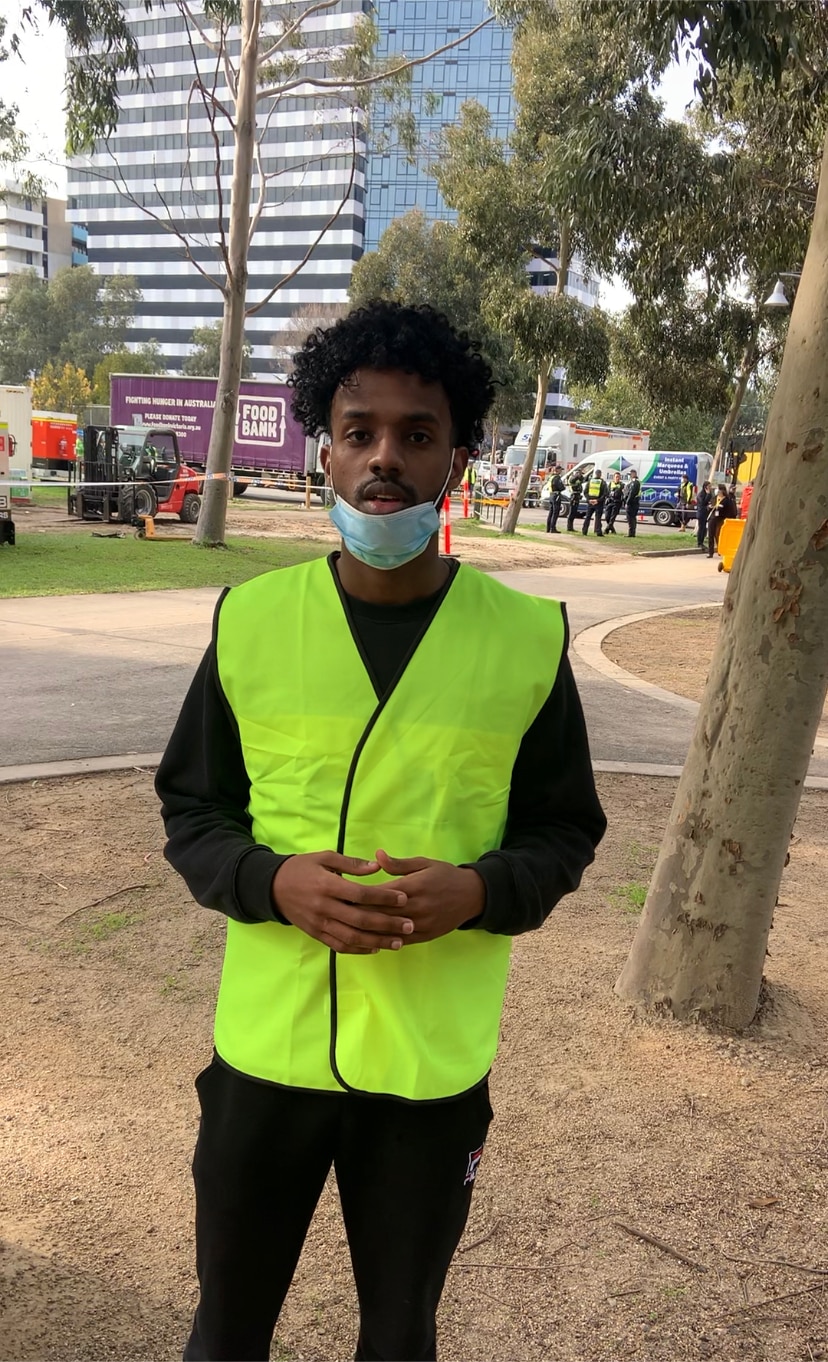 Mohamed Semra volunteering during the hard lockdown at the public housing towers.
Supplied

And there are more carrying Mohammed's sentiment. There are currently eight African-Australian candidates running in this October's council elections, a number that could increase further before nominations close. The Feed spoke to four of the budding candidates hoping to represent their communities.

And for many, it's not been a straight line to local government. There have been obstacles and personal battles for these young men and women to overcome.

'I couldn't talk for a long period of time'

Mohamed Semra, 21, has lived in his local council area of Maribyrnong for 16 years, and it's all he's ever known.

He's running because he believes local councils haven't taken a "proactive approach" when dealing with the health concerns of marginalised communities. It's something he saw while volunteering during the hard lockdown.

'People were telling me about their issues," he said, "I got to see first-hand the impacts of isolation."

"Lot of these people won't call some of the numbers like Lifeline or Beyond Blue because that's just not what we're used to.

"A lot of people are uncomfortable about speaking about the issues that they're going through."

Although he’s only 21, Mohamed has experience being in the spotlight. In 2015, when he was 16, he and a group of other black students were refused entry into an Apple Store in Melbourne. It drew international headlines.

"Throughout my life I've experienced racism," he said, but "it was the first time where I got to like record it." 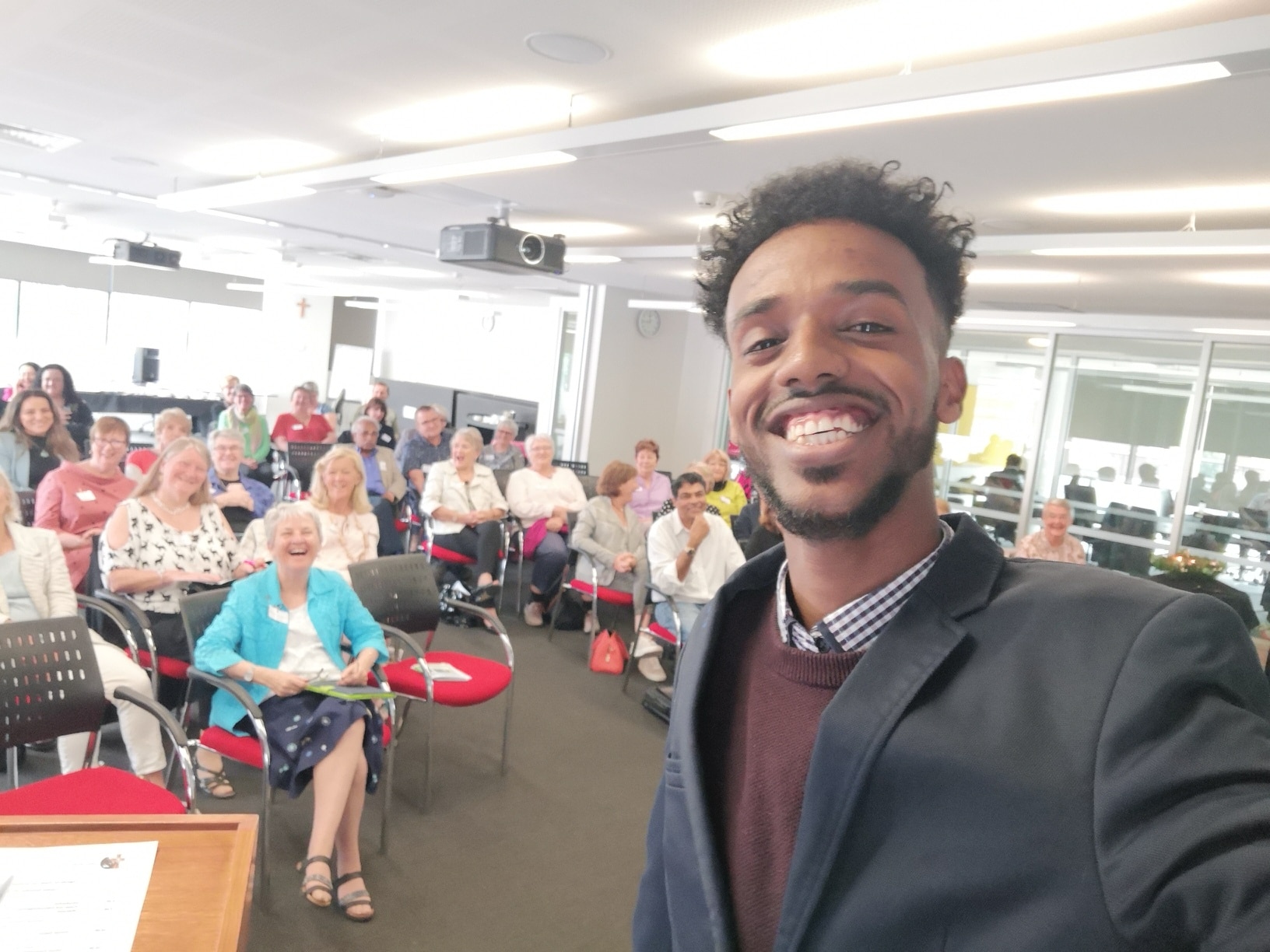 Mohamed is intent on making changes in his local community.
Supplied

Representing his local area in an official sense wasn't always the plan for Mohamed. He grew up with a stutter which, he says, held him back from exploring things he was passionate about. As a child, the thought of standing in front of a group of people to give a rousing speech terrified him.

"I grew up with a disability. I had a very severe stutter. And at times, I couldn't talk for a long period of time," Mohamed said.

It wasn't until he was in year 10 that he was able to find ways to work around this. Mohamed went to an intensive speech therapy course where he learnt how to navigate his stutter. It's because of this he's been able to embark on a new path: community advocacy.

"And that for me," he said, "was when I understood the importance of community programs and initiatives that identify and invest in the potential of young people."

"I wouldn't be the person I am today if it wasn't for that program." Mohamed's taken own a number of guest speaking roles since he was in high school.
Supplied

'I've been tested in all types of ways'

Anab Mohamud, 33, is running for the City of Yarra Council, where she's lived for over a decade. She grew up in the outer western suburbs of Melbourne after her family arrived from Kenya as refugees in 2000.

"I've been tested in all types of ways," Anab told The Feed.

She had to deal with homelessness while at high school. Anab was staying at a refuge before being introduced to some Somali families who assisted her in accessing housing.

She says that leaving home at such a young age meant she became her own parent.

"It feels like you have yourself at the end of the day and God, you know, you don't have nobody else except for God," she said.

But for Anab, there were upsides.

"You can realise who you are as a person, and it opens up that space to learn yourself."

Anab is now a single parent to her young seven-year-old daughter. She is running to set an example for her, and for anyone who has been made to feel they aren't worthy.

"Coming from my own experiences, I felt like the community voices to be heard," she said. Anab Mohamud is running to make sure her seven-year-old and other young people anything is possible.
Supplied

Anab believes the voices of the community in North Melbourne and Flemington were ignored during the hard lockdown. It's what made her decision to run even clearer.

"It's always better to have someone in that culture to kind of communicate things to the community had they done that it would have been different," she said.

"Living in public housing it's only made me aware that maybe these people are thinking that there's no people with knowledge that live in the building."

Why is now the time to run?

Susan Yengi, 35, is running for the Maribyrnong Council but politics was the last thing she thought she'd ever participate in. 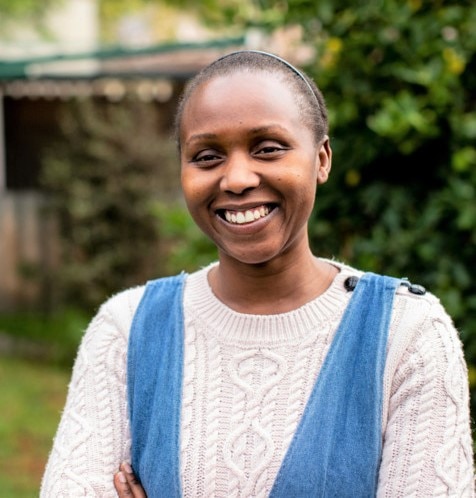 Last year it occured to Susan Yengi if she wanted to make material change it had to be at the policy level.
Supplied

The key motivator was the heated discussion around the so-called 'African gangs' and the frenzy that followed with many media outlets, politicians, and commentators talking about crime among South-Sudanese Australians. That was her community, and it pushed her into action.

"I was like, 'I'm so tired of this shit'," Susan said in reference to the coverage.

"I'm so tired of our community, not just South-Sudanese. I mean the African community, our narratives being narrated for us." Susan with her mother and daughter -- three generations of their family.
Supplied

Susan believes without representation in all levels of government, decisions made for underrepresented communities will not serve them. She references the term 'seat at the table' popularised by Solange Knowles' last album - it's what Susan is calling for.

"If we as Africans do not have a seat at the table, if underrepresented communities are not part of the decision-making process when decisions are being made," she said, those decisions will "always be wrong."

'Consulting with community leaders is just not enough'

Eli Muse, 34, lives in Point Cook with his young family, and is running for council in Wyndham, home to a growing African-Australian community. He believes now is the time, because he's seen how a lack of representation can not only affect communities who are underrepresented but everyone.

"Whenever it came on the news that young people from African descent were involved in crime, there was a different way the [wider] community reacted to it," Eli told The Feed.

"I think it comes from a place of lack of understanding, because the community does not have a representative figure." 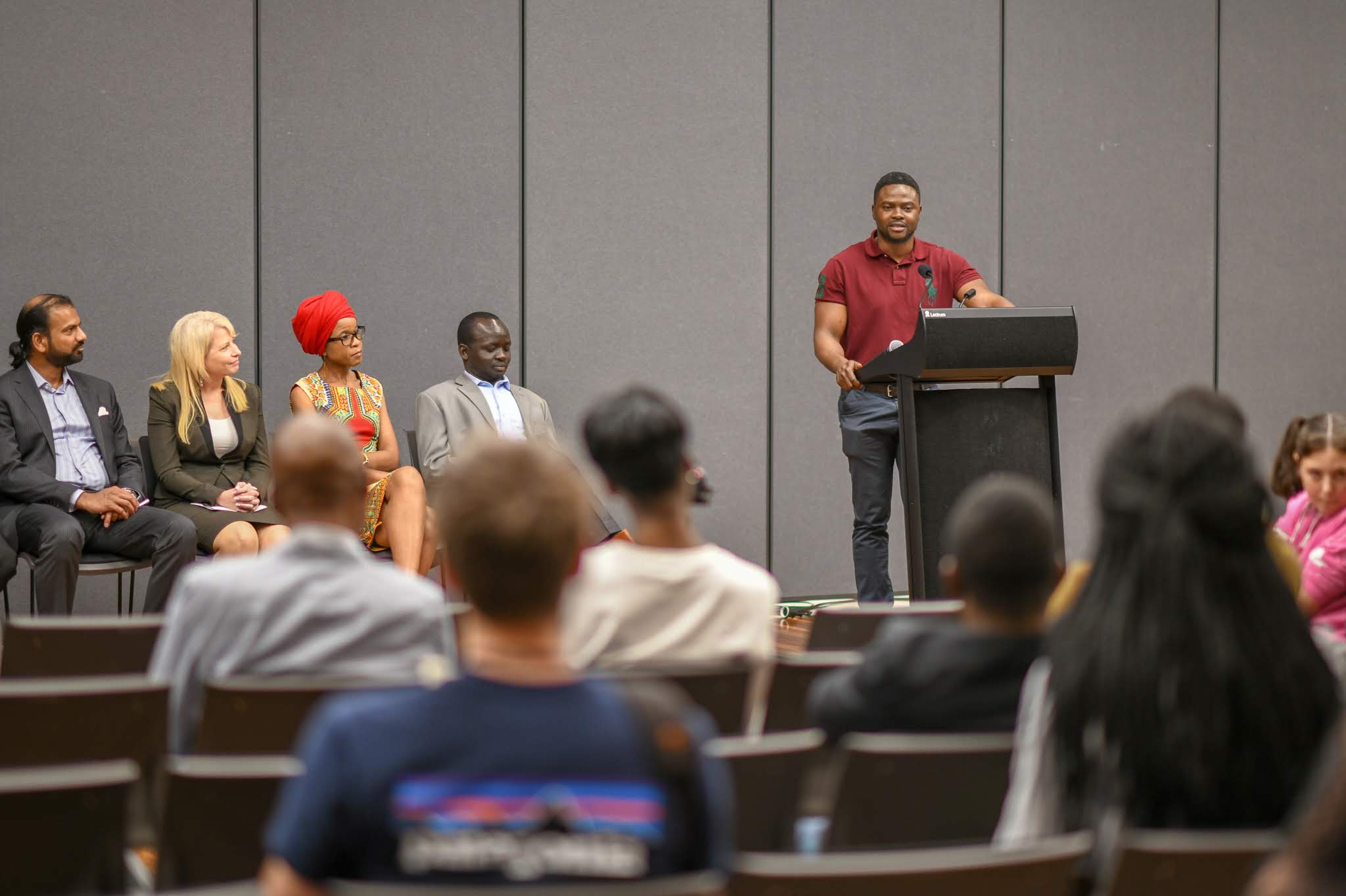 In Eli's local council of Wyndham, he says, there's never been an African-Australian councilor.

"Consulting with community leaders is just not enough, it's come to a point where we need to have representation from this community, serving in positions where they can influence," he said. 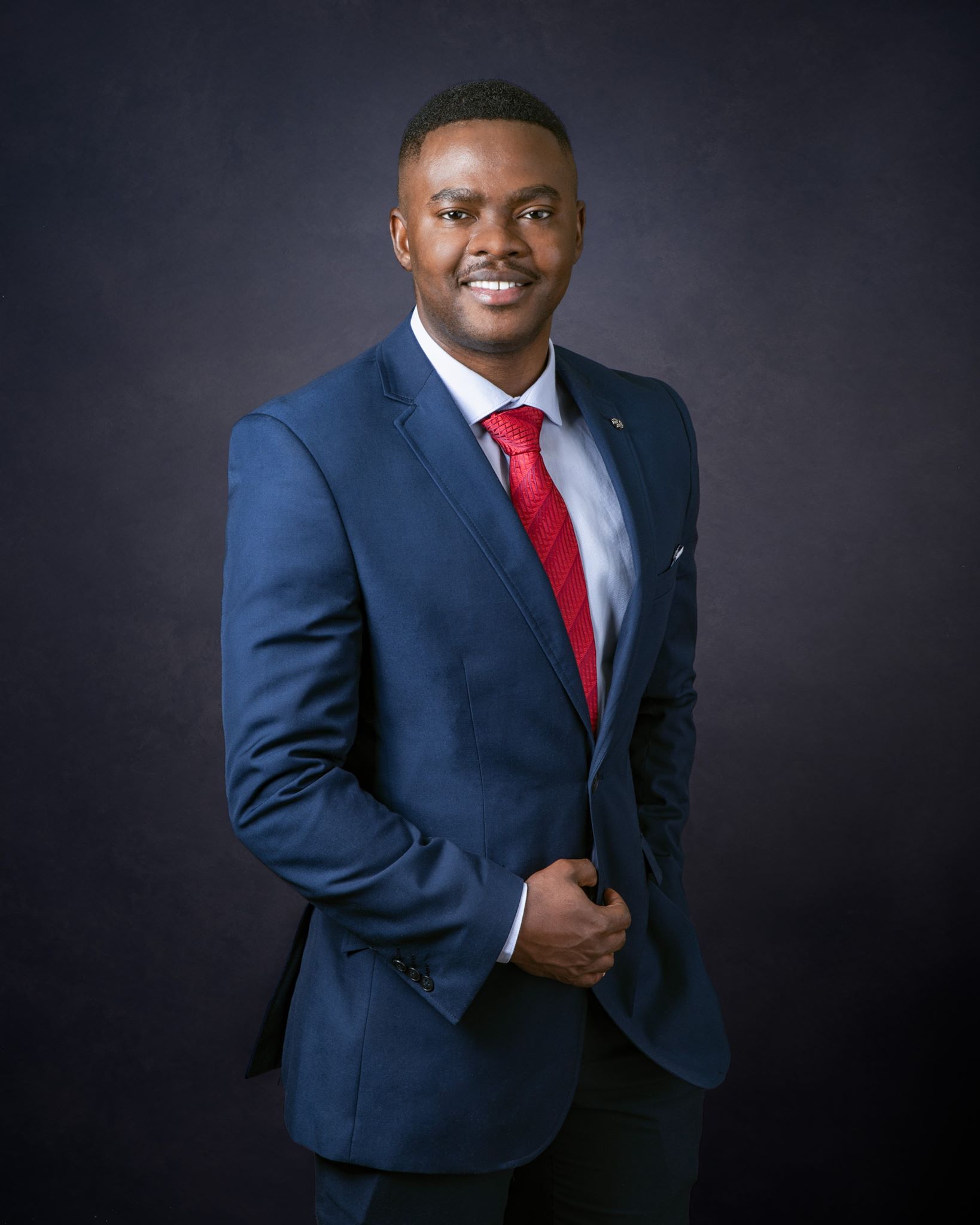 Eli Muse wants to be the first African-Australian to represent his local council.
Supplied

The lack of diversity has real material effects for Eli. He was walking around the local community centres and shopping malls in Point Cook in the early days of the pandemic, and was struck by the posters about COVID-19.

"You could only see that the communication around those areas was just merely in English," he said.

In the city of Wyndham, 41 per cent of residents speak a language other than English at home.

Making a difference at a local level

Mohamed Semra looks forward to the chance to represent his local area. If he gets there, his first priority is to work on breaking the stigma around mental health within the African-Australian community.

"I feel like when I was young, I had to carry a lot of excess luggage," he said.

When he was in primary school, he acted as both student and translator in parent teacher interviews, it meant he needed to grow up faster while reckoning with his disability. It's an example Mohamed gives for why services need to improve - to ensure, he says, they are culturally sensitive, aware and equitable for all members of the community.

"So I decided to run for council because as a young person and a member of a marginalised community, I felt that I was being left behind," he said.

He doesn't want anyone else to be left behind.