A million-dollar jobs and visa scam that promised to help find work for hopeful migrants in regional areas has left dozens up to $50,000 out of pocket while the plan's architect lives in a $3 million mansion and drives a brand-new Porsche.

A recruitment agency run by former banned company director Lubo Jack Raskovic out of an office block in Sydney's north west, promised to help find migrants sponsored jobs and a pathway to visas in exchange for asking fees as high as $70,000.

"He said he can find the right guy in my field - if I want [visa] sponsorship, he can help," said Melbourne-based mechanic and former client, Harmandeep Brar.

A joint SBS-Fairfax Media investigation can also reveal Mr Raskovic, 59, and his company, Global Skills and Business Services Pty Ltd, offered to pay cash to employers in regional areas, in return for jobs and visas.

He works for a different company, All Borders Pty Limited - set up just weeks before Global Skills went broke.

Employer Chris Olm, from Chris's Welding & Steel in Chinchilla in Queensland's Western Downs Region, said he was offered $10,000 if he took on a worker and sponsored them for a visa. After pestering Mr Raskovic for his payment, he was told he would be paid in cash.

Former clients said they discovered the business through word of mouth or Facebook posts. Most spent months trying to source a job though Mr Raskovic but eventually ended up seeking a refund which was never granted in full, and in many cases not at all. Some left Australia ruined.

Last month Mr Raskovic placed Global Skills, of which he is sole director and shareholder, into liquidation with debts of around $2.5 million, leaving 45 creditors, mostly Indian migrants, out of pocket.

According to corporate records the company had "nil" assets when it was wound up. But just 10 months earlier Mr Raskovic bought a $3 million mansion in Bella Vista - described by real estate agents as "one of the Hills district's finest homes" - and purchased a new $100,000 black Porsche Cayenne station wagon, under a separate business entity.

He works for a different company, All Borders Pty Limited - set up just weeks before Global Skills went broke - and operates from the same office under a similar business model. It's owned by his partner, Neo Tau, who shares his Bella Vista mansion.

Forced to return to India

Suneel Kumar Kocherla, 41, said he lost around $30,000 to Global Skills, which promised to help him find a regional job.

He was desperate to find a way to remain in the country two years ago and searched for recruitment companies. He accepted a contract with Global Skills and agreed to pay $40,000.

In return, Global Skills agreed to provide "recruitment services" that included "gathering CVs and requesting references", "facilitating interviews and placement opportunities" and "supporting the offer and acceptance process". A job is not guaranteed, however clients are entitled to a refund of their fees paid less reasonable expenses if employment lasts for less than 12 months.

In April 2015, he received a written job offer from the chief executive of a landscaping company on Queensland's Sunshine Coast.

A "letter of engagement" sighted by SBS and Fairfax Media purports to show the landscaping business offering him a job. The company's boss said he had never heard of Mr Raskovic or his company Global Skills. "Never have I entered into an agreement with anyone to do with that stuff," the firm's boss said.

Asked to respond to the allegations, Mr Raskovic said he had advice not to talk. He did not respond to written questions.

After several other jobs failed to eventuate, Mr Kocherla, who has two young children, was forced to leave Australia and return to India.

Clients, employers in the same boat

Clients aren't the only ones angry at Mr Raskovic. Employers claim they were offered cash payments in exchange for either taking on a migrant worker or sponsoring a visa outcome, but never received them.

Under new laws introduced in December 2015, it is illegal to offer or provide money in exchange for a sponsored work-visa arrangement. Maximum penalties for individuals are up to $50,400 per offence which rises to $252,000 for bodies corporate.

Mr Raskovic declined to answer questions on the payment of fees, however internal documents seen by SBS and Fairfax Media refer on one occasion to a "training fee" of $10,000 offered to employers.

Mr Olm said the $10,000 he was promised would only be handed over after the visa had been granted.

"Once they get approved, we are supposed to get 10 grand," he said.

When he met the worker he said he didn't have the necessary experience, but kept him on anyway.

"I was happy to keep him, I mean they siphoned 50 grand out of the kid," he said.

After the worker received his visa, Mr Olm rang Mr Raskovic to collect his payment.

But Mr Olm said he never received the money and is now considering legal action.

Another business owner, Garry Rogers, who runs the Noosaville Meat Markets, north of Brisbane, said he was offered as much as $10,000 to take on a migrant worker. Ankur paid $50,000 to Global Skills and Business Services for a job that never eventuated.
SBS

A former client, Vanni (not her real name), said Mr Raskovic targets the desire of migrants to stay in Australia.

"He tells you, if you start this job then of course you will settle down here permanently, because there's a few visas where you can get sponsorship," she said.

"And he used to show all the business completing … immigration requirements, like the business is good enough to sponsor a student. That's how he tricks [you]."

One former client, Ankur, not his full name, now drives an Uber to earn back the $50,000 he said he paid to Mr Raskovic. He borrowed money from his father, who had to take out a loan.

"If Jack doesn't give me my money back what am I going to say my dad," he said. "The money which he earned in his entire life?"

Clients say the effect has been devastating.

Harmandeep Brar, a trained mechanic said he paid $45,000 for a mechanics job at a waste services company called We Kando Pty Ltd in Chinchilla.

He was eventually fired after two months. He claims that the job was primarily a manual labour role despite the employment contract describing it as a mechanic role.

"I told them 'you find the wrong job for us' ... I haven't worked with a diesel machine," he said.

He demanded his money back from Mr Raskovic's company but said he has received nothing.

Another claims he is owed $35,000 on the promise of a managerial position. He does not want to be identified because his parents in India still do not know he lost the money.

He ended up driving between Brisbane and Roma - a 500-kilometre journey -  going door-to-door looking for work.

"I slept in the car and I went town to town," he said.

'A more legal way of doing his business'

Schon Condon was appointed as the liquidator of Global Skills and met with Mr Raskovic last month.

"He said he had lost a legal action and was looking at reinventing a better way - and presumably a more legal way - of doing his business," Mr Condon said.

At the meeting Mr Raskovic indicated the company had no assets. But the joint SBS-Fairfax Media investigation has uncovered text messages and emails from January 2017 from Raskovic's company asking clients to pay money into a Westpac account. 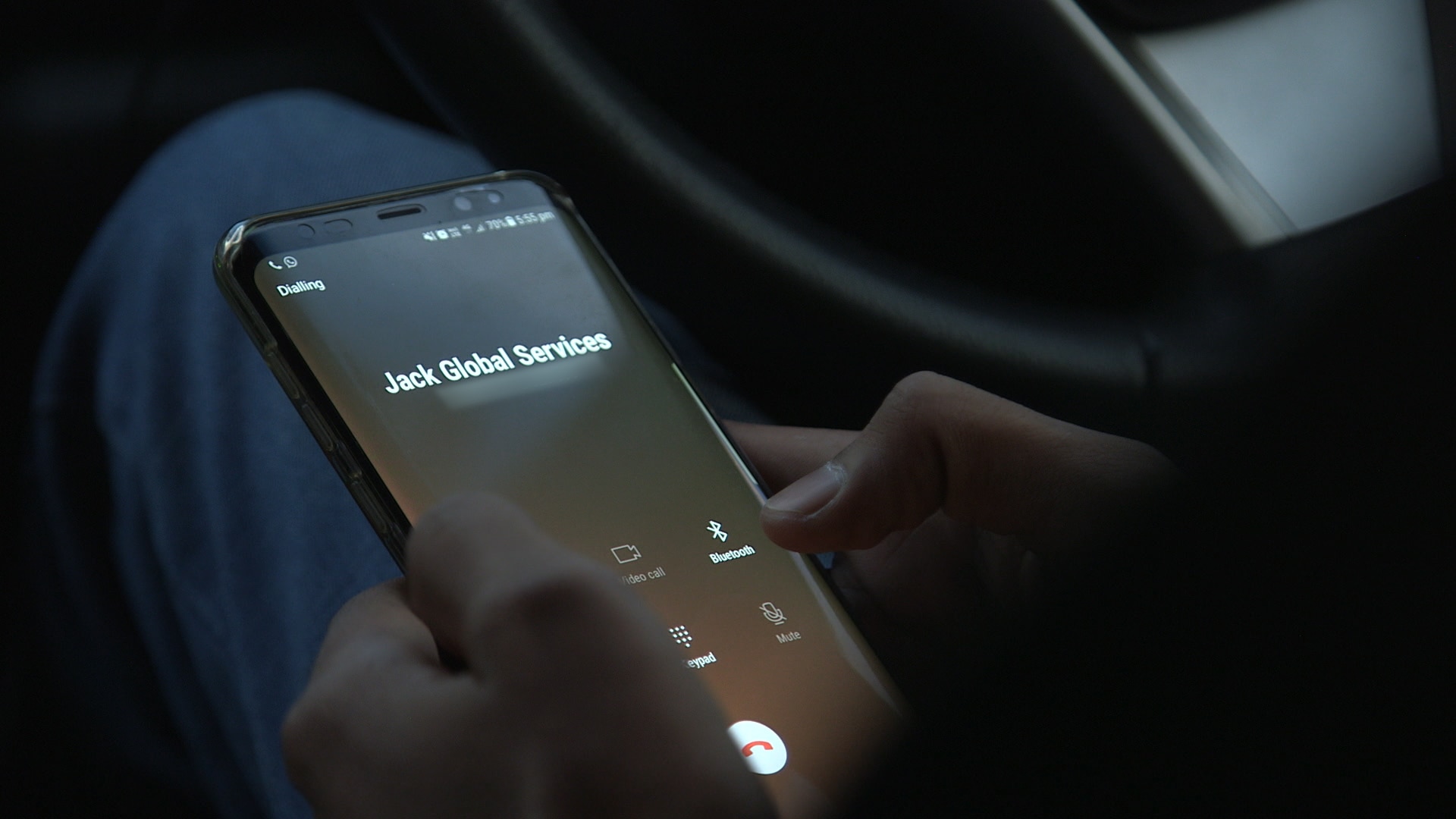 According to invoices obtained by SBS and Fairfax Media, in the six months before Global Skills was put into liquidation, two companies linked to Mr Raskovic sought payment for almost $1 million for services including rent, management fees and consultants fees for Mr Raskovic himself.

While the company was still solvent, clients were told to deposit their money into an account linked to a separate entity owned by Mr Raskovic, which holds the title for his $3 million Bella Vista Waters home, and a number of cars including a Black Porsche station wagon purchased earlier this year.

Mr Raskovic has previously been disqualified from managing companies for four years from 2008 after the Australian Securities and Investments Commission found he allowed three companies to trade while insolvent.

Global Skills and Business Services Pty Ltd also continues to be identified as operating another recruitment website - www.rsms457.com - which promises to connect job seekers with employers who "in many cases… are able to provide Regional Sponsored Migration Scheme and 457 [visa] sponsorships."

According to contracts seen by SBS and Fairfax Media, a company linked to Mr Raskovic would offer job-spotters a $2000 payment for finding work for migrants that would lead to a visa application. Instalments would be paid upon job placement with the remainder "upon completion, lodgement and approval of all requisite employer sponsorship documentation".

Jee Eun Han, executive manager at Australian Immigration Law Services, said it was not uncommon for migrants seeking visas to be exploited or lose their money through such schemes.

"The most common story from them is, 'I paid huge money to the job broker or recruitment agent for employer to sponsor them for visa, even though the job never existed and they paid more than $50,000 sometimes," she said.

"Just put yourself in their shoes - you are overseas, living there for a few years, you may have kids as well, and you're trying to find a job and secure your visa and now you're being targeted by the scammer."