An article that claims ‘Bangladeshi bots’ were responsible for more than 1,000 signatures in Kevin Rudd’s e-petition has been slammed by experts as a total “beat-up” and “non-story”.

It claims that more than 1,000 names on the petition were “fake and some of the signatories were paid for and generated overseas”.

Mr Rudd’s petition calls for a royal commission into Australia’s media landscape, with a particular focus on Rupert Murdoch’s News Corp empire. It received a record-breaking number of more than 500,000 signatures. 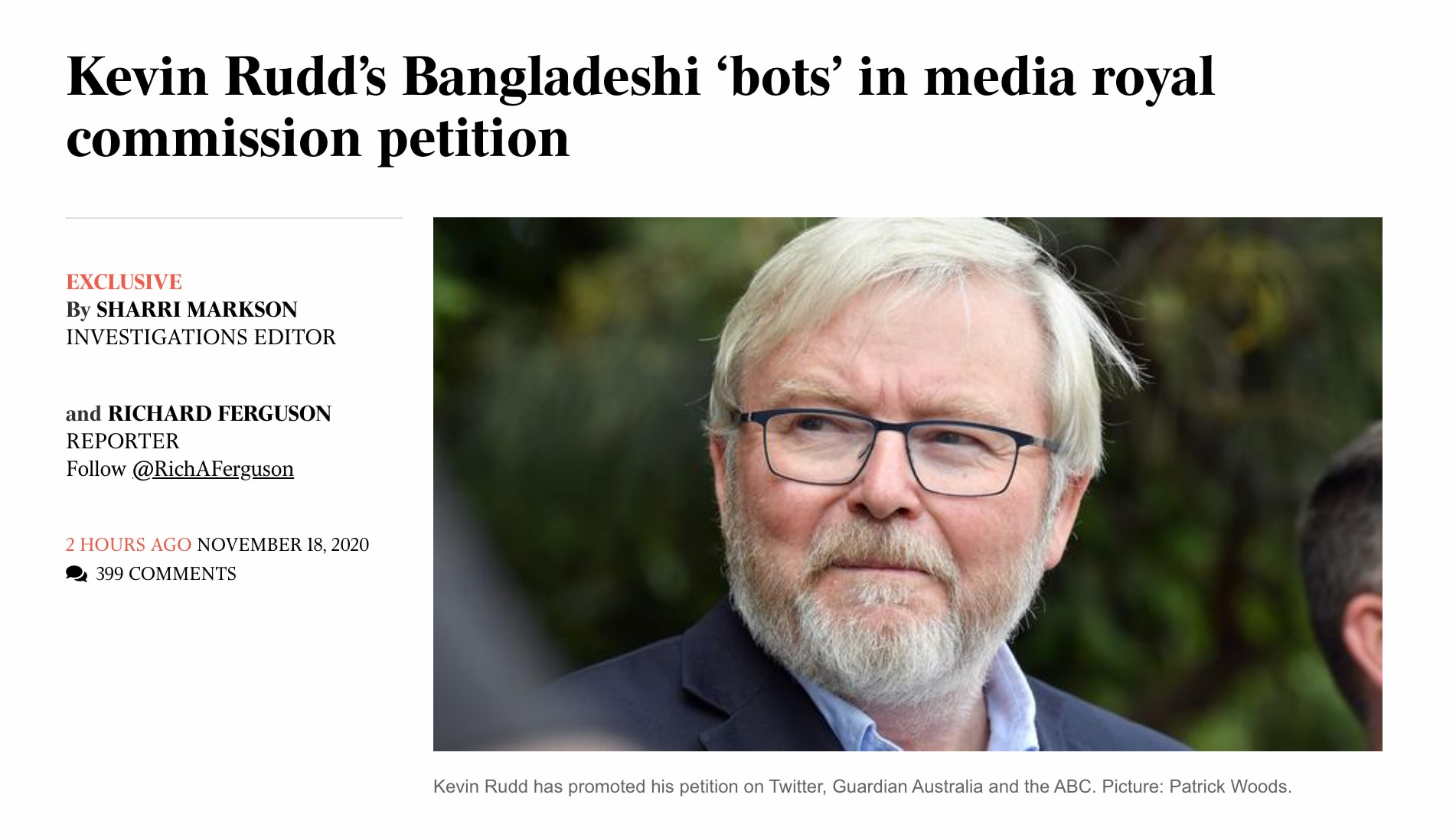 In the article, The Australian -- which is owned by News Corp -- claims a Bangladeshi man was paid $58 by a whistleblower “who wanted to test the vulnerabilities of parliament’s e-petition system to generate 1000 fake signatories in less than 12 hours”.

The article also says that Nicholas Smith, who runs a podcast called ‘The Turncoat’ paid an overseas freelancer to “sign” the petition hundreds of times. The Feed has not been able to verify or discount the claim.

Interestingly, a quick search of The Turncoat’s Facebook page shows it’s littered with posts that have been flagged as misinformation, baseless claims about the effectiveness of hydroxychloroquine, and others, expressing support for President Trump.

Dr Daniel Angus is Associate Professor of Digital Communication at the Queensland University of Technology. He says The Australian’s story is a “beat-up” and “bereft of any substance.”

“They’ve clearly got axes to grind here. They’re trying to undermine the legitimacy of expression by many members of the public who are frustrated by Murdoch’s influence,” he told The Feed.

Dr Angus’ sentiments have been repeatedly echoed by former prime ministers Kevin Rudd and Malcolm Turnbull, champions of the petition, who claim News Corp has a Coalition bias.

The Murdoch smear of our petition calling for a Royal Commission continues. #MurdochRoyalCommission pic.twitter.com/M4ZNypmjfo

Mr Rudd’s major critique has been the extent of media ownership belonging to Rupert Murdoch’s empire, which he’s pointed to owning up to 70 per cent of the country’s print newspapers.

While Mr Turnbull believes News Corp’s publications have become “a vehicle of propaganda”, particularly when it comes to climate “denial”.

“We have to work out what price we’re paying, as a society, for the hyper-partisanship of the media,” Turnbull said on ABC’s Insiders earlier this month.

In the article, The Australian claims “both men, who led coups against their own colleagues to seize power, were also victims of internal political revenge but blame News Corp Australia newspapers for losing office.”

The evidence is in. Exposure to Murdoch disinformation is linked to belief in conspiracies, refusal to follow social distancing and distrust of scientists. Australia urgently needs a #MurdochRoyalCommission to avoid following the American path. https://t.co/fKx6jXY911 https://t.co/gIhGe4pbcN pic.twitter.com/5x7DEzol2B

Mr Rudd has responded to the piece, claiming the article associated him with bots. On Twitter, he said it was “another bald-faced lie, which is now with my lawyers.”

Dr Timothy Graham is a Senior Lecturer in Digital Media at the Queensland University of Technology, who researches bots and misinformation.

He told The Feed that despite the article using the term “Rudd’s Bangladeshi bots”, there is no evidence to suggest Kevin Rudd is linked to any bot activity.

Dr Graham believes that instead, the problem which must be emphasised is “the technical infrastructure of the Australian Government petitions website.”

“The headline of this article is misleading because it tries to weaponise the context of the fact that yes, it is possible to game these systems or any number of petitions,” he told The Feed.

“The only influence is the unnamed individual, who paid someone overseas.” Dr Angus says that with any petition, particularly one as popular as Mr Rudd’s, there is some potential for there to be fake submissions.

He described it as a "nothing story" and added, “it’s a practice that happens in any online petition that you want to generate.”

“With a petition that has half a million people signing onto it, it shows, regardless of 1,000 bots, that it’s a significant issue in the minds of many.”

But how easy is it to game the system?

Dr Graham says that the gaming of the system, described in the article, is “low-tech” rather than “a coordinated conspiracy.”

“The lack of stringent moderation and filtering processes means that if individuals try hard enough, they can get around the very superficial barriers that are put in place using VPNs and setting up fake email addresses and things like that.”

However, he says online systems like the petition site are designed to remove any barriers and allow easy participation for citizens.

“If you start adding more and more layers of authentication on top, if you need to provide a valid passport number or driver's license or something like that, as you go further and further, I think that there's this trade-off where you lose participation,” he added.

The headline is calculated to suggest the bots were inspired by Rudd - for those who go on to read the story that is clearly not so. Will the Oz assist the AFP with their inquiries into whether this conduct - designed to mislead Parliament - involved any offences? https://t.co/vzS0MxE66T

Dr Angus told The Feed he believes publications like Sky News and The Australian are “playing a significant role” in the spread of disinformation.

“With this article, it’s a pattern in a long line of behaviour that’s pursuing highly political agendas to protect its own position in the media ecosystem,” he said.

Let's debunk this right here: the headline of this article is disinformation.

There is no evidence in this article to attribute the fake signatories to @MrKRudd. It is false information spread with the intent to mislead readers.

What concerns Dr Graham the most, he says, is the article’s ability to undermine readers’ faith in democratic institutions and sow confusion and doubt in these processes.

“If that's the takeaway that readers have from this, then what it serves to do is undermine and erode these democratic institutions and the right for political participation,” he said.

“Yes, there are flaws in the petition website. But we have to deal with these and live with these,” he added.

“We can't throw the baby out with the bathwater and say, ‘well, we should just ignore any inquiries and commissions that come out of online petitions’.”

Ken O’Dowd, the House of Representatives’ petitions committee chairman told The Australian that the matter “will be investigated by my committee and we will take further action if required.”