Chairman of Liberal Party’s La Trobe branch Andrew McNabb has told The Feed that a series of controversial Facebook posts and emails about Muslims sent by his personal accounts were not written or shared by him.

Council elections in Victoria have been contentious and led to the deep probing of candidates’ backgrounds and beliefs via their social media accounts.

Mr McNabb is running in the Cardinia council elections and is the chairman of the Liberal Party’s La Trobe branch. The Member for La Trobe is Assistant Minister for Multicultural Affairs Jason Wood.

The Feed has seen several Facebook posts and emails shared by the accounts several years ago that call to ban Muslim immigration to Australia or tell Muslims to “leave the country”. A video of the Black Lives Matter protests from extreme far-right YouTuber Avi Yemini was also shared by the account in June this year.

“Everyone should watch this video! The majority of these ferals have absolutely no idea,” the account wrote.

“All lives matter, but according to some they don’t.”

One person who commented on the post claimed: “Avi Yemini is a convicted criminal”. To which the account replied, “stop being the victim, if you don’t want to be a [Liberal] party member that’s your choice.. I’m not a racist, I’m a realist!”

“Time to stop being so bloody political correct and pandering to the Muslim (sic) faith. If they don’t like our way of life, culture and our laws, then LEAVE!,” another post from 2017 read. Adam Sadiqzai told The Feed that while he was contesting Liberal preselection in 2017, the account referred to him as “Ali Barber” several times.

Mr Sadiqzai, who was born in Australia but has Pakistani heritage, says the posts had a “profound impact” on him.

“I thought ‘God, my family has been here for 70 years and I’m still not considered Australian?’”

“I’ve only recently been (sic) told about ‘privacy systems’ which I’m told you have to do to make sure other people don’t pretend to be you,” he added.

“The World Wide Web still remains a bit of a mystery to me. And whoever has been trying to take advantage of my web stuff should be ashamed of themselves for misleading voters.” 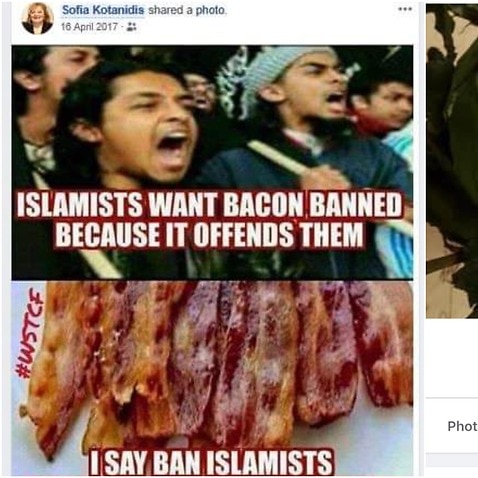 “Those posts were put up over a few months and there were responses and banter on them. If you look at the people who commented they’re all people from the area. Were they all hacked?”

Adel Salman from the Islamic Council Victoria said the posts were “offensive” and believes the matter needs to be thoroughly investigated by the Victorian Liberal Party.

He said if the account was hacked, Mr McNabb “has an obligation to take appropriate steps to remove offensive content.”

“He needs to make amends and assure everybody that he dissociates himself from these views and he is an advocate for multiculturalism and a supporter of the Muslim community,” he added. A senior member of the Victorian Liberal Party, who wished to remain anonymous, told The Feed they were surprised by the posts shared on the account.

“I've seen Andrew at many events with mainly Indian, Nepalese community members and some African ones and he seems to get along fine with everyone. So the posts surprise me,” they said.

“It certainly has raised eyebrows all the way to Canberra, that much I can tell you that for sure.”

‘Not my words or my views’

The email address which sent the messages is listed on the Victorian Electoral Commission site as Mr McNabb’s official contact.

One chain email sent by the email address in 2011 tells readers if they agree with the email to “pass this on” and if they don’t “delete it”.

The email suggests a series of “new immigration laws” including; “no special bilingual programs” in schools, any foreigner who’s a “burden” to the taxpayer will be deported, “foreigners may have no protests, no political organising... no bad-mouthing our Prime Minister or his policies” and if you come to Australia “illegally, you will be actively hunted and when caught, sent to jail until your deportation can be arranged.” The Feed obtained this email sent from Mr McNabb's email account.
The Feed

“I didn’t write any of the emails you are referring to. They aren’t my words or my views,” he said.

“This has always been my bigpond address and I’ve only even given out my password for this address to a handful of trusted people. At least I hoped they could be trusted,” he added.

“I’m currently trying to work out if any of them have done the wrong thing. I’d be (sic) devastated if this was the case.”

Mr McNabb said he’s since changed his password and is wondering if there’s been “funny business going on” with his email.

“In the past, I’ve very occasionally received bizarre responses to emails which I was supposed to have sent, but which I didn’t send and never even had copies of,” he said. 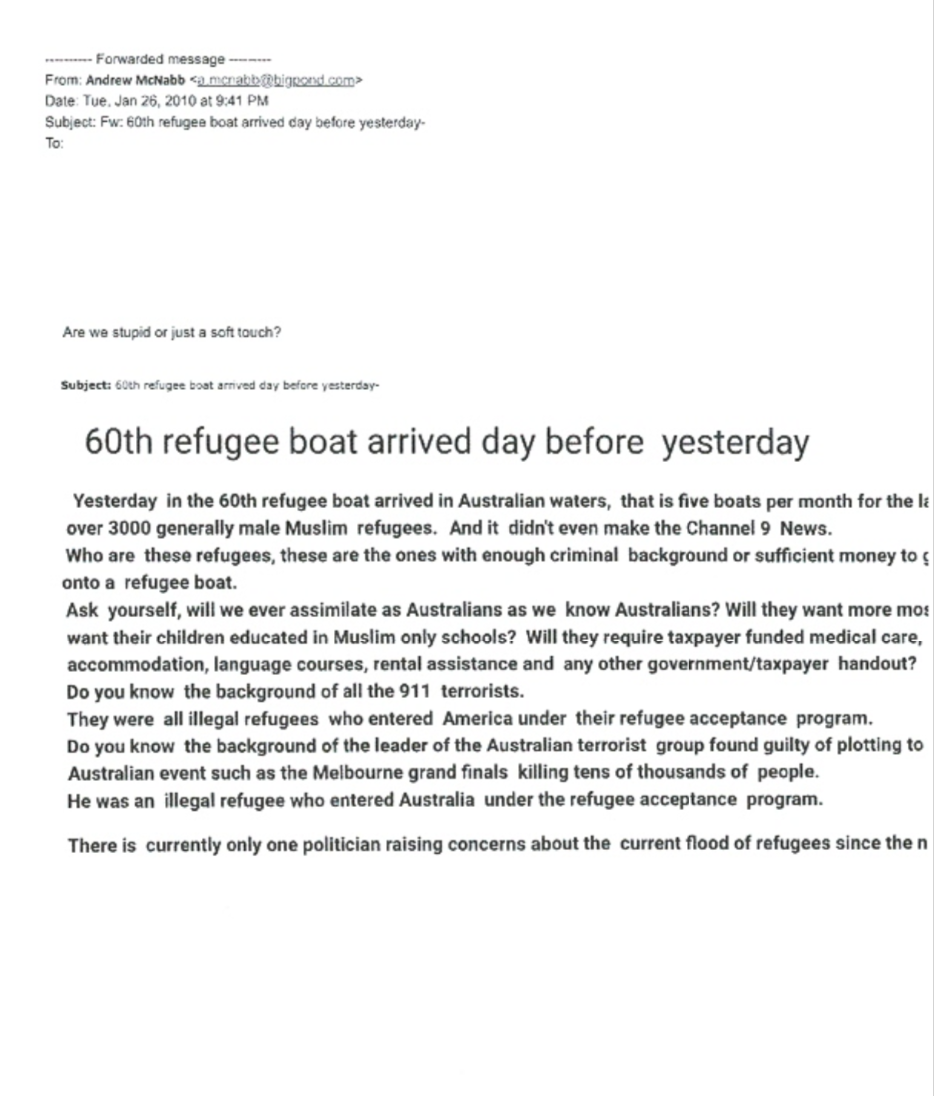 “Wishing our large Indian Australian community and those around the world a Happy Indian Independence Day!,” one post read.

In another post, he praises the Sikh community for handing out free food during the pandemic.

In a statement to The Feed, a spokesperson for Assistant Minister Jason Wood said neither the MP nor the Liberal Party is supporting any candidate in the council elections.

“It is up to the ratepayers to decide who they vote for,” they added. The spokesperson said any allegation of inappropriate conduct from a Liberal Party member would be “taken very seriously and instantly reported to the party headquarters.”

“The Liberal Party has appropriate internal investigation processes and will deal with such a matter accordingly. Assistant Minister Wood will always strongly support the outcome of any such investigation,” they said.

“Assistant Minister Jason Wood strongly condemns, in the highest possible terms any hatred or racism towards the Muslim community or any other community. There is no place for racism in Australia.”