Liberal MP Tim Smith has been blasted by Indigenous Australians for playing down the significance of Olympic Gold Medallist Cathy Freeman wearing the Aboriginal flag during her 2000 win and for replying to a tweet of Aboriginal heart emojis with an Australian flag.

Tim Smith, Member for Kew, joined the online conversation during the airing of ‘Freeman’, a documentary celebrating the 20th anniversary of Cathy Freeman’s historic win in the 400m at Sydney’s 2000 Olympic Games.

Freeman was the first Indigenous Australian to win individual gold at the Olympics and during her victory lap, she proudly carried both the Australian and Aboriginal flags.

In the same year, 250,000 people walked across Sydney Harbour Bridge to show support for reconciliation.

In the documentary, which aired on ABC last night, Freeman confessed growing up she was “quite embarrassed to be a black kid, an Indigenous kid.”

"I grew up with that self-image. I could never understand why I smiled at someone and they didn't smile back. I would get really upset – why don't you smile back? It used to devastate me." 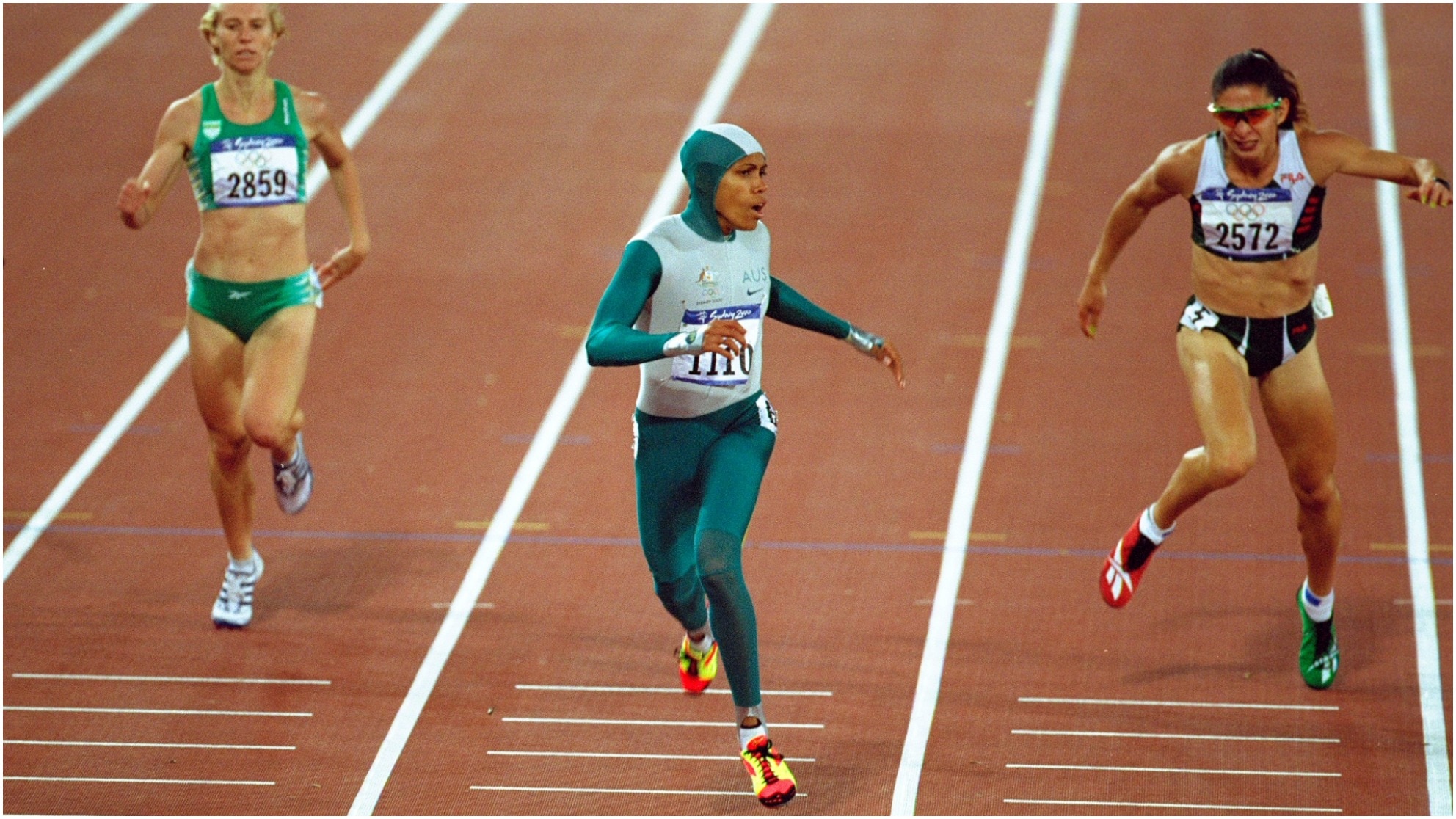 Cathy Freeman crosses the line to win gold in the Womens 400m Final at the Olympic Stadium.
Getty

She also claimed that when she was just 10 years old she won a race but was never handed the trophy “apparently because I was black”.

During the airing of the documentary, Mr Smith replied to a tweet by ABC Journalist Patricia Karvelas, where she recalled crying with exultation as she watched Freeman drape the Aboriginal flag over her shoulders.

“I was at Homebush Stadium 20 years ago & was ecstatic that Cathy Freeman had won a gold medal for Australia. All I cared about was an Australian just kicked the rest of the world’s collective butt in the 400m which is a really, really tough event,” Mr Smith said.

“Leave the politics out of sport,” he told the journalist. The Member for Kew also replied to another of Karvelas’ tweets -- that included three Aboriginal coloured heart emojis -- with an Australian flag.

Karvelas shot back: “You do know she’s Aboriginal yeah? No need to bring the culture wars here it’s boring and so twenty years ago.”

I was at Homebush Stadium 20 years ago & was ecstatic that Cathy Freeman had won a gold medal for Australia.All I cared about was an Australian just kicked the rest of the world’s collective butt in the 400m which is a really, really tough event. Leave the politics out of sport.

James Blackwell is a Wiradjuri man and Research Associate with the Centre for Social Impact at UNSW.

“What disgusts me the most though about his comments is the hypocrisy,” Mr Blackwell told The Feed.

“When Indigenous people are protesting against Black deaths in custody they’re seen ‘un-Australian’ and it’s all about race and identity politics, but when they start performing and really succeeding, he’s all in on national unity, and race suddenly has to be taken out of things. He can’t have it both ways.” 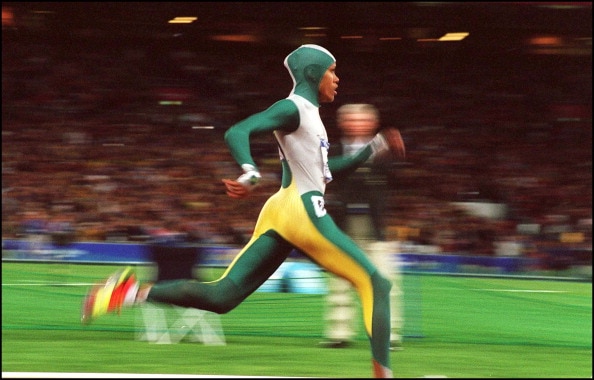 Blackwell said the MP’s tweets were an example of casual racism experienced on a daily basis by Indigenous people.

“Australia is built on a foundation of racism and theft against Aboriginal and Torres Strait Islander people. Whether it is our land, language, culture, or sport, people like Mr Smith always find ways to deny the success and status of Indigenous people as Indigenous people.”

“I doubt the flag wearing and flag emoji is the issue he has with Cathy Freeman and her success; clearly he seems uncomfortable with her being a proud Black woman showcasing her Indigeneity to the world,” he added.

“That or he is just doing what he always does and being a troll for the culture wars. This man got elected to the Victorian Parliament, good heavens.” 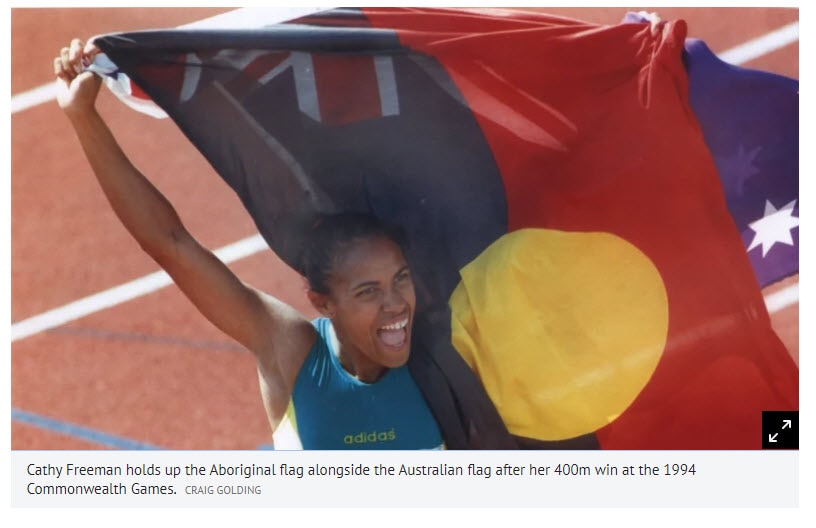 Cathy Freeman holds up the Aboriginal flag after her 400m win at the 1994 Commonwealth Games.
Craig Golding

Mr Blackwell’s sentiments were shared by many Indigenous and non-Indigenous Australians on Twitter.

“Would be deeply unpatriotic of you to disregard an official flag of the Commonwealth,” another person added.

There really should be no culture wars over a flag that's been proclaimed as an official one by the Governor General into the flags act. Been that way since '95.

Would be deeply unpatriotic of you to disregard an official flag of the Commonwealth. pic.twitter.com/X6x6gvFfRH

Why are you the way that you are? This is embarrassing and unnecessary. Imagine watching a doco about an amazing Indigenous woman who brought this entire country together and choosing to respond with some divisive grandstanding...is this truly the legacy you want to leave?🖤💛❤️

Tunstall threatened to send Freeman home but she continued to carry the Aboriginal flag after her victory in the 200m, claiming: “With all due respect, I don’t care. I’m just here to run”.

Looking back on her 2000 victory, Freeman said the other competitors didn’t stand a chance.

"I feel like I am protected. My ancestors were the first to walk this land. It [is] a really powerful force. Those other girls were always going to have to come up against my ancestors.”