Prof. Chris Rissel thinks a legislative response to the problem of cyclists misbehaving on the road would create more problems than it would solve.

Let’s face it: it’s easy to blame a cyclist. They get lots of bad press and they’re a minority, an out-group rather than an in-group.

However, we need to look at the underlying issues here. Do cyclists need to be monitored more closely? Do most cyclists break the road rules? The Amy Gillett Foundation, with Monash academic Marilyn Johnson, used a covert video camera to record cyclists at ten sites across metropolitan Melbourne from October 2008 to April 2009. They found that of 4,225 cyclists facing a red light, only 6.9% didn’t stop. The vast majority of those who broke the rules were just turning left.

Would registration reduce this rate? Registering bicycles would create more problems than it fixes. It would cost the state far more than it would collect in revenue. The police resources required to enforce a bicycle registration scheme are simply not worth the ability to able to fine a handful of people behaving badly on bicycles.

When people shift trips from driving a car to riding a bike, everyone benefits.

When a pedestrian or cyclist breaks safety road rules they are most likely to hurt themselves, not others. The cost to society of pedestrians jaywalking, or cyclists riding too fast on a shared path, are miniscule compared to the damage a two tonne mass of metal, rubber and plastic speeding through a red light or stop sign can do. 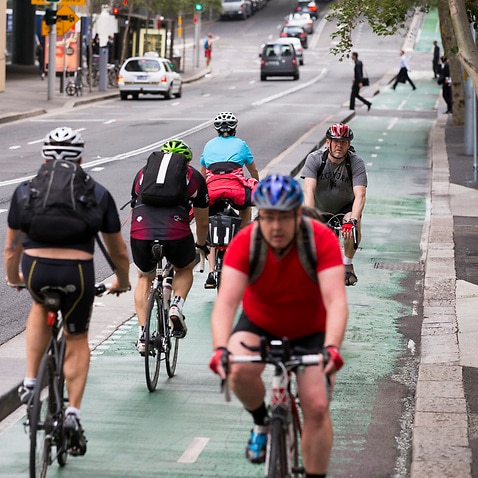 Riding too fast on a shared path with lots of pedestrians is a social problem more than a legal problem. It is bad manners, like someone running through a crowded mall. Collectively we need to remind each other that that sort of behaviour is inappropriate and re-establish norms around respect and basic etiquette.

Bicycle registration would be a powerful disincentive to cycling. All levels of government in Australia have plans and targets to increase levels of cycling, because of the significant health, environmental and congestion-reduction benefits. When people shift trips from driving a car to riding a bike, everyone benefits. But bike registration would likely deter even more riders than mandatory helmet legislation (30-40% of riders stopped cycling when that was introduced).

Then there are the myriad problems of establishing a bicycle registration scheme. Do you register the rider (who may own multiple bicycles) or the bicycle? What about children’s bikes, or off-road mountain bikes not used on the road?

Vehicle registration used to be based on the weight of a vehicle, and therefore the damage the vehicle did to the road.

At any rate, most bicycle riders (80%) have driver’s licences or pay taxes that in part contribute to road funding (it’s not widely known that registration fees don’t go directly to road funding: like nearly all taxes they go into central revenue and are distributed as needed).

Some argue that bicycle registration would provide insurance for the rider or third party insurance in the case of a crash. In Victoria, at least, state insurance already covers cyclists for any accident with a motor vehicle. Insurance is also available to members of bicycle organisations in Australia, and could easily be incorporated into other types of insurance schemes.

If bicycle registration changed driver behaviour in a way that legitimised cycling then I’d be all for it. However, I can’t see a small metal plate with some numbers on it slowing impatient drivers down, or helping drivers “see” bicycles on the road, or affecting drivers in any meaningful way that made it safer for bicycles.

Rather than pursuing registration, politicians and cycling groups need to do more to promote existing cycling etiquette guides which emphasise respect for all road users. Bike shops should give these out whenever someone buys a bike, to reinforce good behaviour. Campaigns like “Do the right thing” can help support social norms about how all road users need to slow down and be respectful of each other.

Making more laws is rarely the answer to social problems like the interaction between different road users. This is not a question of legality: it’s a matter of manners, awareness, and of mutual respect.

What can governments do to make cycling safer?

Professor Chris Rissel works at the School of Public Health, University of Sydney.