QAnon believers follow a baseless theory that claims a network of Satan-worshiping pedophiles run a global child sex-trafficking ring that is plotting against the presidency of Donald Trump.

The conspiracy first emerged several years ago on 4Chan but has gained momentum during the pandemic as social media platforms struggle to manage the swell of disinformation.

Marc-André Argentino is a PhD candidate at Concordia University, who’s been researching what he calls the “Pastel QAnon” phenomenon.

“These influencers provide an aesthetic and branding to their entire pages, and they, in turn, apply this to QAnon content, softening the messages, videos and traditional imagery that would be associated with QAnon narratives,” Mr Argentino wrote.

“This branding is the polar opposite of ‘raw’ Qanon,” he added.

1/ Tonight I want to share some of the research I have been doing on what I am calling "Pastel QAnon". I have been spending some time researching Women QAnon believers on Instagram. Many are lifestyle influencers, mommy pages, fitness pages, diet pages, and alternative healing pic.twitter.com/0YWeTdo5QW

QAnon influencers -- some with substantial followings -- post images of quotes with baby pink and sky blue palettes that read:“#whereareallthechildren”, “COVID is over” and “child sex trafficking is not a conspiracy theory.”

As #QAnon is blocked by Instagram, followers of the conspiracy theory use hashtags like #savethechildren and #childsextrafficking, making it difficult to link some of these accounts to the movement.

Dr Amelia Johns, a Senior Lecturer in Digital and Social Media at the University of Technology Sydney, said she’s seen users posting rainbows and love hearts beside hashtags used by the QAnon movement.

“It’s often middle-aged women who identify as mothers and wives who are wanting to protect their own children and other children,” she told The Feed.

“But with even despite the nice aesthetic they’ve got going on, when you look at the comments, they have very pro-Trump views or are explicitly racist and anti-semitic.” Dr Francesco Bailo is an expert on social media in politics at UTS, who is working with Dr Johns to research conspiracy theories.

He told The Feed that “QAnon is an umbrella for other conspiracy theories” and movements like anti-vaxxers and anti-5g.

“There’s a high level of distrust towards authority. When you look at the hardcore members they’re expecting a civil war in the near future,” Dr Bailo said.

Dr Bailo said their research assistant is “struggling to keep up” with the changing terminology and hashtags adopted by the QAnon movement.

“We've even wondered at some point about whether just using poor grammar has also been to try and get past the censorship going on,” Dr Johns added. Experts say it's often difficult to spot QAnon followers as they brand themselves as advocates for stopping child sex trafficking.
Instagram

The Feed has observed several accounts that use pastel colouring to promote QAnon messaging.

Several posts from this user speak of the journey down the "rabbit hole", the so-called "great awakening" and being “red-pilled”,  a reference from The Matrix which conspiracy theorists use to describe ‘sudden enlightenment’.

Kaz Ross is a Lecturer at the University of Tasmania’s School of Humanities.

She believes QAnon is now in its second stage as the conspiracy has “morphed to change and adapt to whichever community is taking it on.”

“I think what we can see in 2020, was that QAnon 1.0, which was really focused on Trump and his various battles, has broadened out to include a whole lot of other different conspiracies.”

“Yes, it's still focused on Trump. But here [in Australia], it's become about much bigger things. And I think that's where the wellness side comes in.” 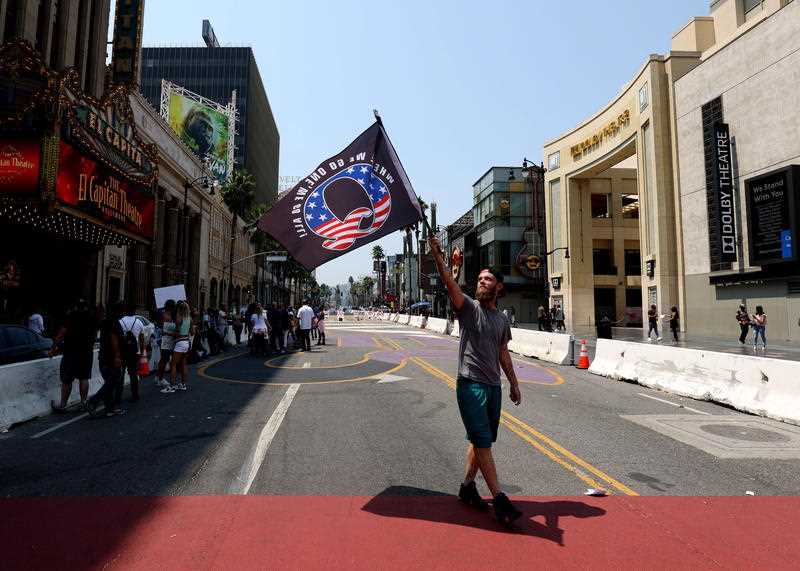 A man holds a QAnon conspiracy flag while walking over the All Black Lives Matter mural in Hollywood.
AAP

“Obviously, in the wellness industry they've already got a big suspicion of authority, you know, pharmaceutical companies, mainstream thinking around diet and exercise,” Dr Ross told The Feed.

“There is no coincidence that most of these wellness influencers that have moved into the Q world are based in Queensland or in northern NSW,” she added. Dr Ross said that wellness bloggers and ‘new age’ influencers tell others to “trust your gut”, which makes their followers susceptible to being red-pilled.

“So you'll get so-called psychic mediums, Australians, who [say they] are going on meditative journeys to the ‘child abuse tunnels’ underneath the rock in Uluru,” she told The Feed.

“Some people 100% believe that because the woman saying it comes across as very authentic, very genuine. She's crying. She's distressed.”

‘It’s all about the business model’

Dr Ross suspects the sudden uptake of QAnon and Q-adjacent theories by influencers is motivated by “the business model of generating clicks”.

From selling products to conference tickets, Dr Ross said there is money to be made from promoting QAnon and other ‘trending’ conspiracy theories.

“You will see people talking about raising your vibration 500 hertz to fight off ‘the alien lizard people that are keeping people in tunnels’ and in the same breath it'll be ‘buy our protein powder because it's really important to improve your immune system’,” Dr Ross said.

One female QAnon influencer identified by The Feed had almost 96,000 followers. In a video posted to Instagram she claimed, on her previous Instagram account, she amassed 56,000 followers in three weeks by posting QAnon content before it was shut down.

Dr Ross also believes that Facebook and Instagram have failed to halt the spread of harmful conspiracy theories.

“Instagram has completely dropped the ball on QAnon,” she told The Feed.

“And to start deleting groups of hundreds of thousands of people in a Facebook group when QAnon has been going on for three years, shows [that] until the whole world woke up to the problem, they’re perfectly happy to get the traffic.” QAnon is spreading so quickly through the wellness space that some influencers have felt compelled to speak out against the movement.

Seane Corn, a yoga teacher with 108,000 followers, wrote on Instagram that “QAnon’s agenda is to use manipulative means to recruit folks who are rightfully scared, angry and disillusioned with the state of our nation.”

“I’ve personally seen colleagues in the yoga community fall prey to the dangerous and untrue narratives being spread by QANON,” life coach and yoga teacher Shannon Algeo wrote to his 25,000 Instagram followers.

“This group is taking advantage of sexual abuse survivors, people who care about animal rights, and folks in the yoga and spirituality communities who have counter-cultural leanings. We must stand together against this force of manipulation.”