A children’s LGBTQI+ inclusion event featuring drag queen ‘Annie Depressant’ will go ahead, but a conservative ‘mum blog’ continues to fight against it.

VIDEO ABOVE: The Feed looks at drag kid culture in Australia.

A Victorian Library at the centre of online criticism over a 'Rainbow Storytime' event has confirmed the event will go ahead, despite significant backlash online.

Last week it was reported that Melbourne drag queen 'Annie Depressant' received a barrage of online abuse for her participation in the event, which sees drag queens read stories to children.

An initial post from the Whittlesea Library promoting the story time received comments that reportedly referred to the performer as 'sick', 'evil' - some even labelling Annie a 'paedophile.'

The library took the post down in response to the abuse - but has today released a second post, reaffirming its commitment to the original event. The Whittlesea Library says the May 17 event will mark the International Day Against Homophobia, Biphobia, Interphobia and Transphobia (IDAHOBIT).

"Celebrating IDAHOBIT Day is one way that the library can help to build increased understanding and inclusion of LGBTQI people in our communities," the post reads.

The library's original post was shared on a popular conservative Facebook mum blog - 'Political Posting Mumma' - which has more than 17,000 followers.

Marijke Rancie, the 'mumma' behind the page, is a prominent same-sex marriage 'no' campaigner and is publicly opposed to the Safe Schools program.

There are more than 700 comments on her first post about the event. While some followers defended Annie Depressant and the Whittlesea library, the majority were highly critical.

Just this morning, the page shared more coverage of the 'Rainbow Storytime', calling on 'warriors' to share their opinions in the comments.

"Let's protect the kids from this indoctrination and sexualisation," she wrote.

It's not ok for drag queens to tell the kids of Australia that their gender is fluid. 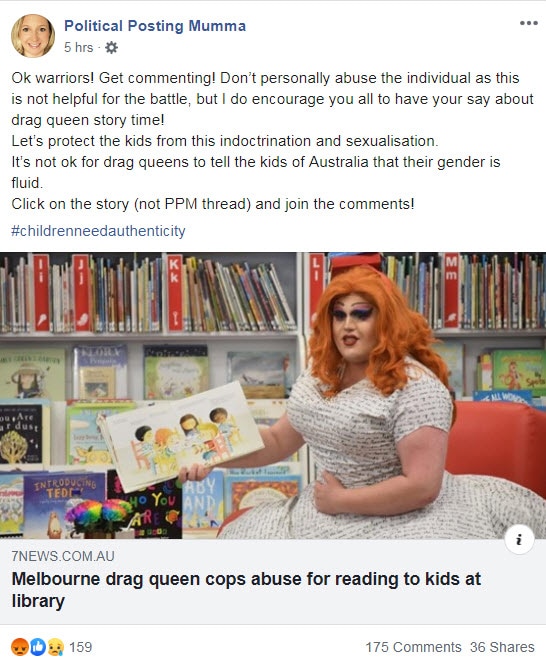 The Feed reached out to Ms Rancie, but did not hear back at the time of publishing.

I could not understand how people could think that about another person.

"I would like to remind them that I am a person, everything they are saying is being said about a real person and there is nothing inherently inappropriate about being a drag queen."

Annie says the abuse hasn't deterred her from going ahead with Friday's event.

"It's an easy way to bring diversity to children who don't get to see different walks of life so often."

"It is important that we as a library service champion inclusion for LGBTQI people in our community," reads the Facebook post.

It says all 'current and relevant' child safety procedures have been undertaken.

Last year, the New South Wales city of Wollongong was thrown into the middle of a similar debate, after it was announced local Adam Larkham would host a drag story time as his alter-ego 'Roxee Horror'.

Larkham told The Feed he had genuine concerns that he was going to be assassinated.

"I thought Roxee was going to get shot in the face." The abuse grew when former Labor leader Mark Latham shared it on his own Facebook page.

"The biggest thing that I got the most was people saying that I was trying to sexualise children by doing drag story time and that I was a transgender woman, which I'm not," said Larkham.

Wollongong Lord Mayor Gordon Bradbery said he understood the concerns, but was conscious that the city had 'diverse' views.

"I just had to say, 'Look, chill out guys, just relax. Life does go on and let's enjoy the experience."

WHO IS 'DESMOND IS AMAZING'?