It’s hard to imagine how one chicken ovum and one 17-year-old could bring the world so much joy. Egg Boy made that happen.

Many powerful words have been said against Anning’s hateful take on the tragedy.

Yesterday, Anning was giving a small press conference in Moorabbin, Victoria when Egg Boy - aka 17-year-old William Connolly - calmly walked up behind the senator, whipped out his phone and cracked an egg right on Anning’s noggin’.

Here is that moment from multiple angles because technology is both a gift and a curse.

Here's a video of Anning getting egged - the kid walked right up, got his phone out, started recording, and calmly cracked the egg on Fraser's head pic.twitter.com/KhC07yPhjy

Connolly was taken into custody by Victorian police following the incident but was later released without charge.

UPDATE: The boy who egged disgraced Senator Fraser Anning has been released by @VictoriaPolice without charge. @7NewsMelbourne

Since then there has been an outpouring of support for Connolly.

There’s been a GoFundMe set up to pay for Connolly’s legal fees plus “more eggs”. Despite being live for less than 24 hours, it’s already surpassed its $2000 goal by $12,000.

Almost overnight Connolly’s Instagram has skyrocketed from a couple of hundred followers to 197,000 with every one of his photos adorned with well-wishes from fans.

A number of bands, including Violent Soho, Hilltop Hoods and The Living End, have offered the teen lifetime guest list spots.

Holy shit, he full smacks him with a lefty and egg boy just cops it and keeps filming. Cool as ya like mate, what a legend! Egg boy has guest list for life. Hell, he can be our official photographer too... Love you egg boy! pic.twitter.com/szNIHpQVCv

Egg Boy, you have free entry to any Hoods show for life should you wish.

The news has been picked up all over the world with Rolling Stone US, UK’s ITV, Al Jeezera, The New York Times and many, many more lauding Egg Boy’s efforts.

There’s been calls to make Connolly Australian of The Year. 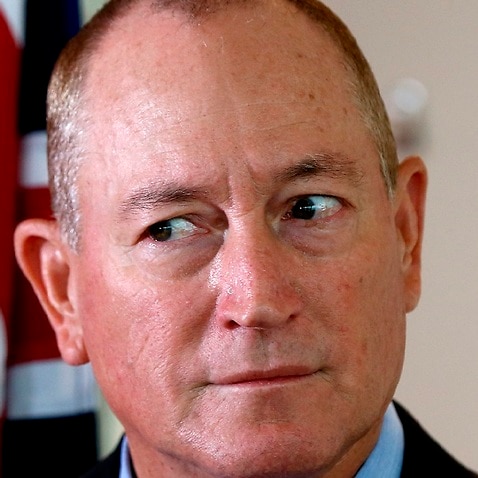 There’s even a conspiracy circulating online after journalist Eleanor Robertson noticed that the shirt Connolly was wearing bore the Roman numerals MCMXVII (1917). The same year in which Australian Prime Minister Billy Hughes was egged in the famous Egg Throwing Incident.

has anyone else noticed that egg teen's shirt has the year of australia's famous "egg throwing incident" on it in roman numerals? could be a coincidence, but interesting nonetheless! could it be.... an easter egg???? pic.twitter.com/2u550T3YXq

Connolly has made one online appearance post-egging, in a video uploaded to his Snapchat he warned people not to do what he did lest they get “tackled by 30 bogans.”

Egg boy on the egging: pic.twitter.com/bZMFFg6jA0

In a time of such sadness and grief, Egg Boy has represented a glimmer of hope.

Y'day, tens of thousands of teenagers marched for action on climate change. Today, a teenager egged one of Aus most prominent Nazi's. 18mth ago, kids 18-25 had 2nd highest turnout for SSM postal survey (and the highest % support).