Fandoms can be a place of belonging for passionate stans, but they can also be a ‘living hell’, according to one Taylor Swift fan. The Feed spoke to devoted Taylor Swift fans about some of the bullying and harassment they’ve experienced.

Two cardboard cut-outs of one of the world’s biggest pop stars sit at the end of her bed. In the kitchen, her special oven mitts bear the face of Taylor. Her cupboards are overflowing with tour-specific merchandise.

It’s become a loaded term in the past few years.

A mash-up of ‘stalker’ and ‘fan’, goes some way to explain the word. Eminem’s chart-topping 2000 single ‘Stan’ goes further. In 2018, stan was officially entered into the Oxford Dictionary, as 'an overzealous or obsessive fan, especially of a particular celebrity.’

But in 2020, stan culture has proved itself to be more than it’s dictionary definition. A stan's function now extends beyond popstar worship. Stans have used their shared voice to rally for social issues, raise money for causes and even influence political campaigns, engaging a younger generation in democracy. Rita and Taylor Swift.
The Feed

Social media sites provide a space for users to wield this kind of power collectively where they can swarm around shared goals.

That’s what differentiates a stan from a fan.

“A fan will probably like her [Taylor Swift’s] music and go to her shows,” Rita says.

“But a stan, like myself will have, you know, three social media accounts and um, you know, sometimes you don't get much sleep.”

Rita manages Taylor Swift fan pages on Instagram, Twitter and Tumblr. She’s amassed over 10,000 followers on the accounts where she updates other fans about Taylor’s whereabouts, her new music and chart positions. She also uploads her own videos which attempt to grab the pop star’s attention.

It’s been a passion that’s endured for over 12 years. In that time, including concert tickets, flights to shows and limited-edition merchandise, she’s spent almost $100,000 on her passion. 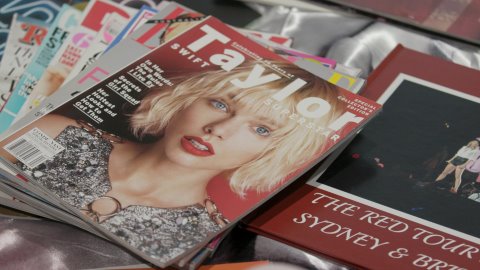 Rita's room is full of Taylor Swift memorabilia.
The Feed

For Rita though, her connection to Taylor is priceless. Taylor’s music has gotten her through some tough times. When she’s experienced loss, heartache or fallen in love, Taylor has been the soundtrack.

But last year, that record was scratched.

In August, around the launch of Taylor’s Swift’s new album ‘Lover’. She became the target of online ridicule amongst some Swifties. Her videos were re-edited and posted with captions that mocked her.

In the past few months, that harassment has intensified. Rita has been inundated with insulting tweets and direct messages.

“A person put that information in and got up my information about my car and posted that online and then they threatened to come here and steal what I had.”

“Some people have said that I should kill myself. People have threatened to, to come to my home and, and hurt me.” 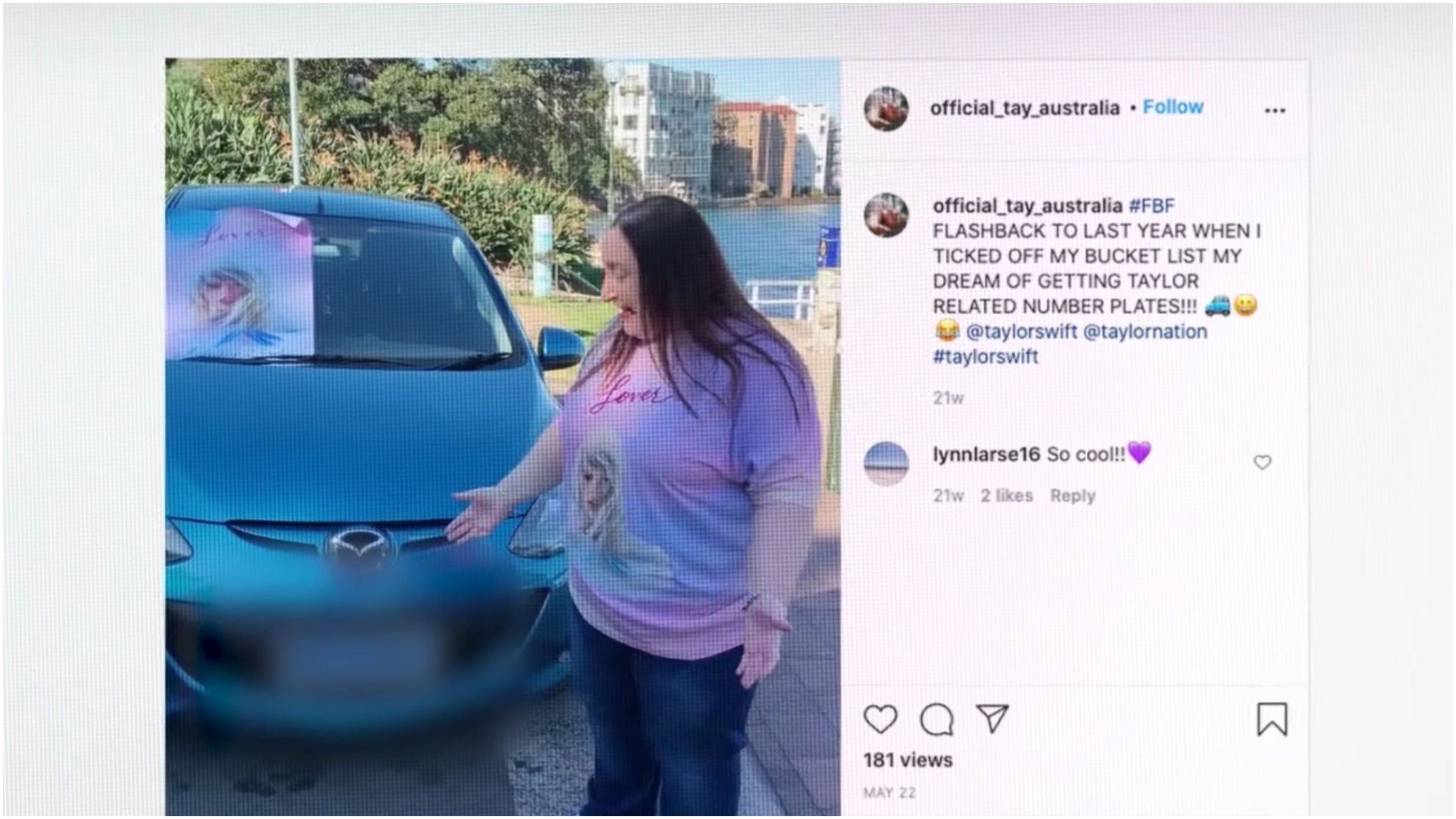 Rita says she has received death threats from Taylor Swift fans.
The Feed

According to Rita, one Twitter user went as far as to hack into her phone in order to take over her accounts.

Although shocking, it’s this kind of online behaviour that’s become synonymous with stan culture where doxxing, death threats and pile-ons have been normalised.

Earlier this year, The Feed reported about how some  LGBT fans in Taylor Swift’s fandom were targeted over a disagreement about a song ‘Betty’. Many LGBT Fans had their sexualities outed to their parents. Some lived in countries where the consequences of doing so were very dangerous.

“This practice is very dark and disturbing,” Dr Jessica Balanzategui, lecturer of Cinema and Screen Studies at Swinburne University told The Feed in October.

“Fandoms will often police their own boundaries in ways that encourage certain practices that are deemed ‘acceptable’ in the fan community, and discourage those that challenge the fandom’s accepted narratives around a celebrity,” When a member of the community strays from the acceptable behaviour or if a stan’s idol is criticised, that person then becomes the target, according to Dr Balanzategui.

So although fandoms can be a collective digital culture that provide a sense of belonging, they can also thrive off the destroying of an individual.

The Feed reached out to Taylor Swift’s management about these incidents at the time but no reply was received.

Taylor is also yet to comment on the treatment of journalists that have found themselves the target of online hate. Pitchfork journalist Jill Mapes was doxxed for not giving Taylor’s album ‘Folklore’ a 10/10.

Mapes gave the album an 8/10 and was harassed by fans who shared her contact details including her email, mobile and home phone number on Twitter.

New York Times pop critic Jon Caramanica was as critical of ‘Folklore’ as he was complementary but he too faced similar harassment for his review of the album. “You’re inundated with the hatred they have,” Junkee Media journalist Jared Richards says.

He found himself at the bottom of pile-on last year when he wrote an article criticising Taylor Swift’s song ‘You Need To Calm Down.’ He accused the singer of ‘queerbaiting’, something a lot of Swifties disagreed with him on. Many wrote to the publisher to have him fired from his job.

Junkee didn’t fire him. It wasn’t the first time their journalists had faced similar treatment for music criticism.

After attacks from Swifties, as well as One Direction and Louis Tomlinson fans, Junkee editor Rob Stott took action. He decided to allow journalists to remain anonymous.

“It’s sad,” Jared says. “I would prefer to not get death threats than to criticise Taylor Swift.” The onus of responsibility for cyberbullying within fandoms seems to be something that neither social media sites nor pop stars want to take on.

As a test, The Feed reported a Taylor Swift stan account that frequently cyberbullies another stan in Taylor’s fandom. Some of the offending posts have now been taken down but the account wasn’t suspended or deleted.

Experts say that although Twitter and Tumblr allow users to flag inappropriate content and report users for harassment and bullying, these reporting mechanisms do very little to curb toxic behaviour.

“They need to be more responsive to complaints,” says Dr Lauren Rosewarne, the senior lecturer at the University of Melbourne.

“Things have to escalate to the point of imminent danger for it to be treated seriously.” “One suggestion has been user verification, where a user would need to provide ID in order to make an account. But online anonymity is a key selling point for these social media sites.”

If the incentive for change is low, popstars could fill the void by setting boundaries on their platforms and calling out bad behaviour when they see it, Dr Rosewarne says.

“I think pop stars have a responsibility to denounce it but Taylor Swift acts a bit like the tech companies, in that, the more people she has buying, liking and commenting on her stuff the better,” she says.

“If Taylor interferes with the way her fandom operates, the risk is: she could turn people off,” she adds.

“Not saying anything tacitly implies that she’s okay with it happening.”

The Feed reached out again to Taylor’s management for comment but no reply has been received. Rita thinks Taylor Swift fans should stick up for each other.
The Feed

For Rita, she believes it’s up to the fans to change the culture.

“I feel that we, us as the fans should look out for each other,” she says.

“If you are a Taylor fan, if you're a Swifty you, you know what she believes in and I think she'd just want everyone to choose, you know, to choose love.”