Tennis pros, John Millman, Paul McNamee and Matt Reid made a star appearance at a tennis practice in Melbourne, delighting a group of recently released refugees.

Ahead of the Australian Open, a number of tennis stars fell into disrepute among Australians for complaining about social media about hotel quarantine.

But not tennis pros John Millman, Matt Reid and former number 24, Paul McNamee, who all volunteered their time on Thursday to practice the sport with a group of released refugees. He said the response to those complaints from Australians drew his attention to the plight of refugees in hotel detention.

“It was crazy to think they’d been detained in a hotel for over a year. I mean, two weeks was tough but I can’t imagine doing a year,” Reid said.

“When you hear what these guys have been through it was mind-boggling,” he added. 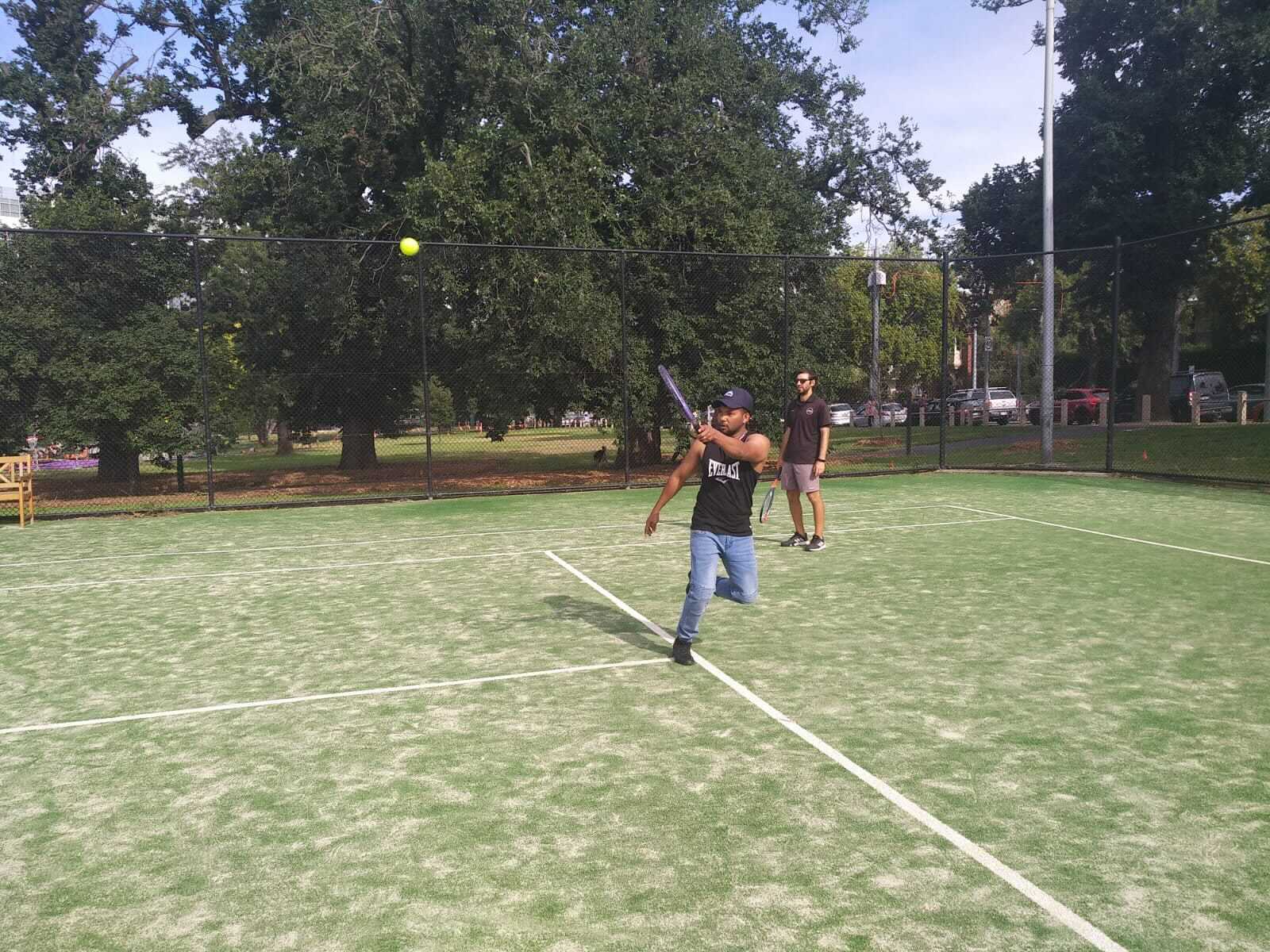 The practice came as more than 500 tennis players and staff that quarantined in the Grand Hyatt were forced to isolate after a positive case of COVID-19 in a hotel quarantine worker.

Great to see you @Craig_Foster & @AzimiMoz
Freedom is something special for everyone, let's raise your voice for Thoes who are still behind the glass and bars in detention torture centers. off & on shore!#GameOver pic.twitter.com/SHMMBGElOc

Luckily, Neither Millman nor Reid had stayed at the hotel and were able to make the event.

“You definitely saw how happy they were hitting some balls,” Reid told The Feed.

“They were actually very, very good. I was surprised because some of them said they’d never played tennis before. Maybe they’ve got a little career coming up,” he added. 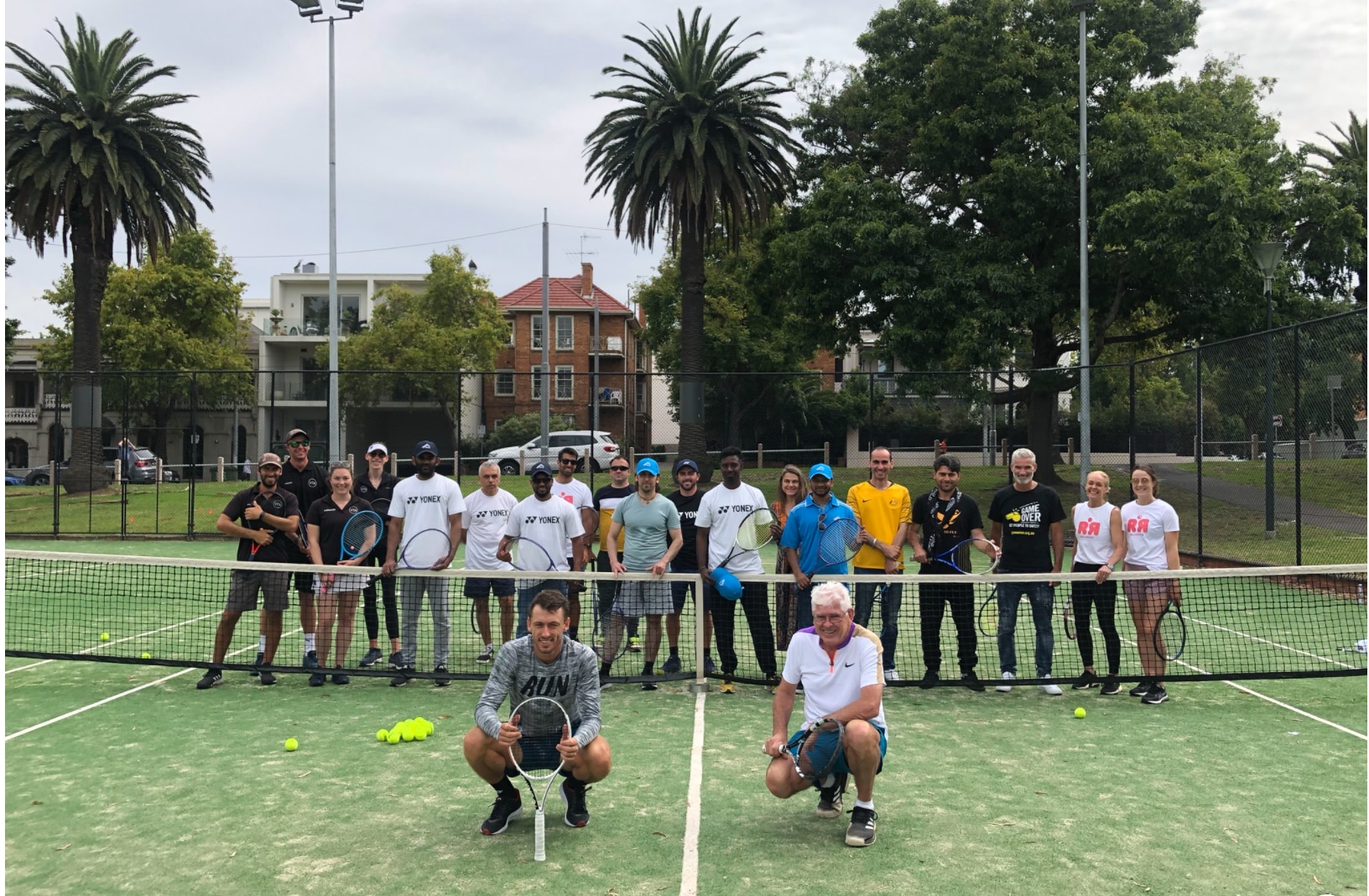 “I love Millman’s playing. I never thought in my life I would meet him,” Thanus said.

“It was very hard to play against him but he played at our level, very slowly for us.” Thanus spent over eight years in detention before he was released from Melbourne Immigration Transit Accommodation about a week ago with 14 other refugees.

“I don’t know how to explain my feeling when I was released, I was like a bird,” Thanus said.

“My mother [in Sri Lanka] was waiting years, day by day. I sent her a message saying ‘I am a free man’. I’ve been waiting eight years to tell my mother that.”

Freedom is a human right

For my friends @AzimiMoz @farhadbandesh & 400 others onshore and off, it has come at an awful cost of 8yrs suffering

Without the voice of compassionate people, likely not at all 🙏

Thankyou all. Keep it up. It’s not over til all are free#GameOver pic.twitter.com/mX80QZle96

Two weeks ago, Sri Lankan refugee, Ramsiya Sabanayagam, was also released from Park Hotel, along with 25 other men.

“Today was my first time ever in my life playing tennis,” Ramsi told The Feed.

“At Park Hotel, I spent 23 hours in my room. Just an hour we walked in the corridor,” he added. 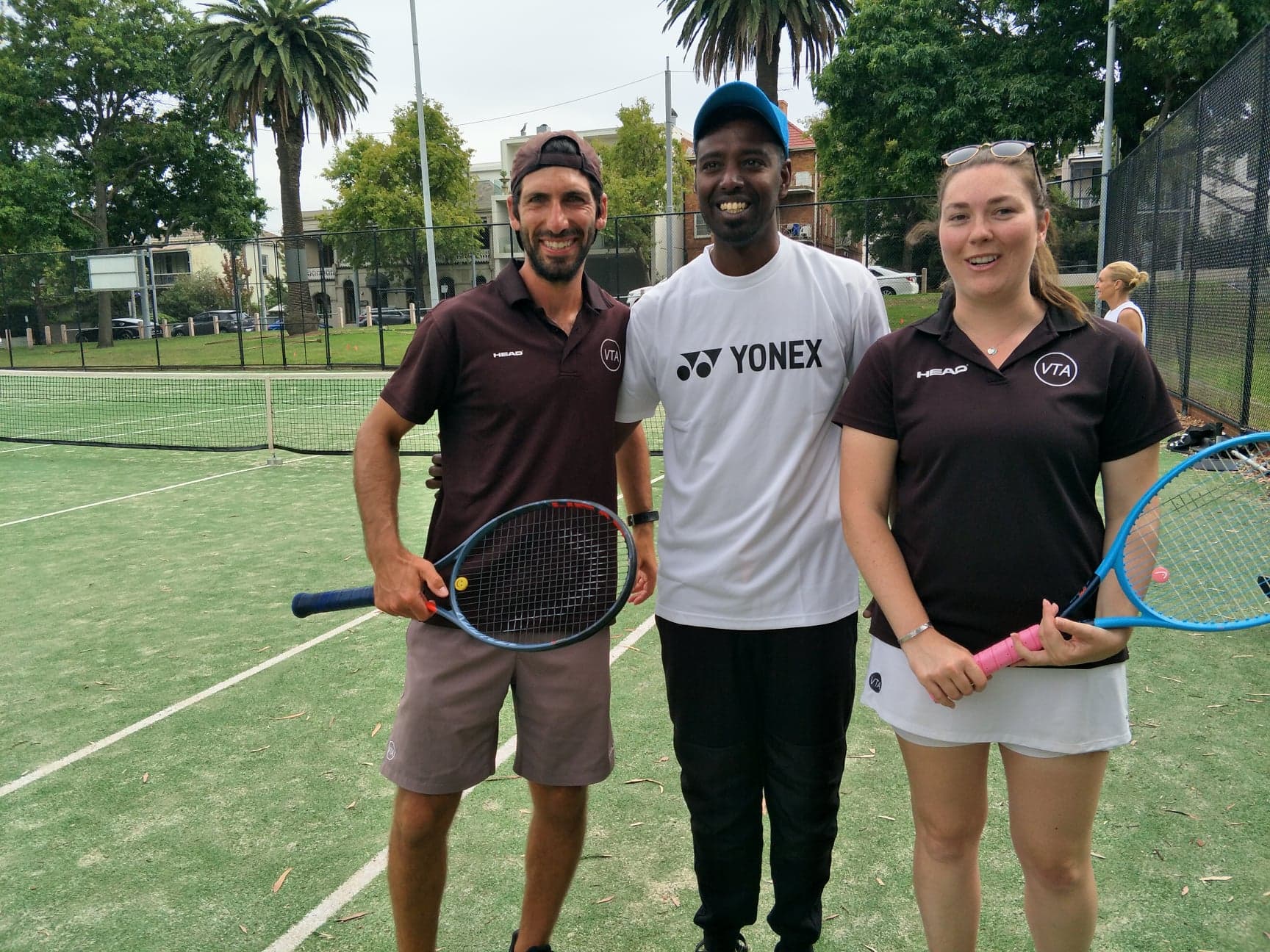 Refugee Ramsi with VTA trainers, Brontë Goodwin and José Mainella.
Supplied
Both men were transferred to Australia under the Medevac legislation in 2019 and have been given six-month bridging visas.

The Department of Home Affairs previously told The Feed no refugees who travel to Australia by boat “will be permanently settled here.”

Instead, a spokesperson said the men are “encouraged to finalise their medical treatment so they can continue on their resettlement pathway to the United States, PNG or another third country, return to Nauru or PNG, or return to their home country.”

When asked about the releases, The Department said it “does not comment on individual cases and “has nothing further to add to Minister Dutton’s comments on 2GB Radio.” 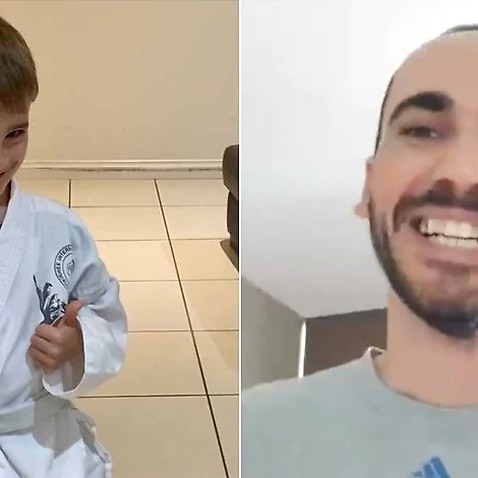 'He calls me coach': Seven-year-old bonds with detained refugee over taekwondo

Minister Dutton had commented on 2GB that the men from Park Hotel were released as “it’s cheaper for people to be in the community than it is to be at a hotel or for us to be paying for them to be in detention.”

The tennis practice was organised by The CorriLee Foundation, with equipment, the courts and coaches donated by Rally4ever and the Victorian Tennis Academy. 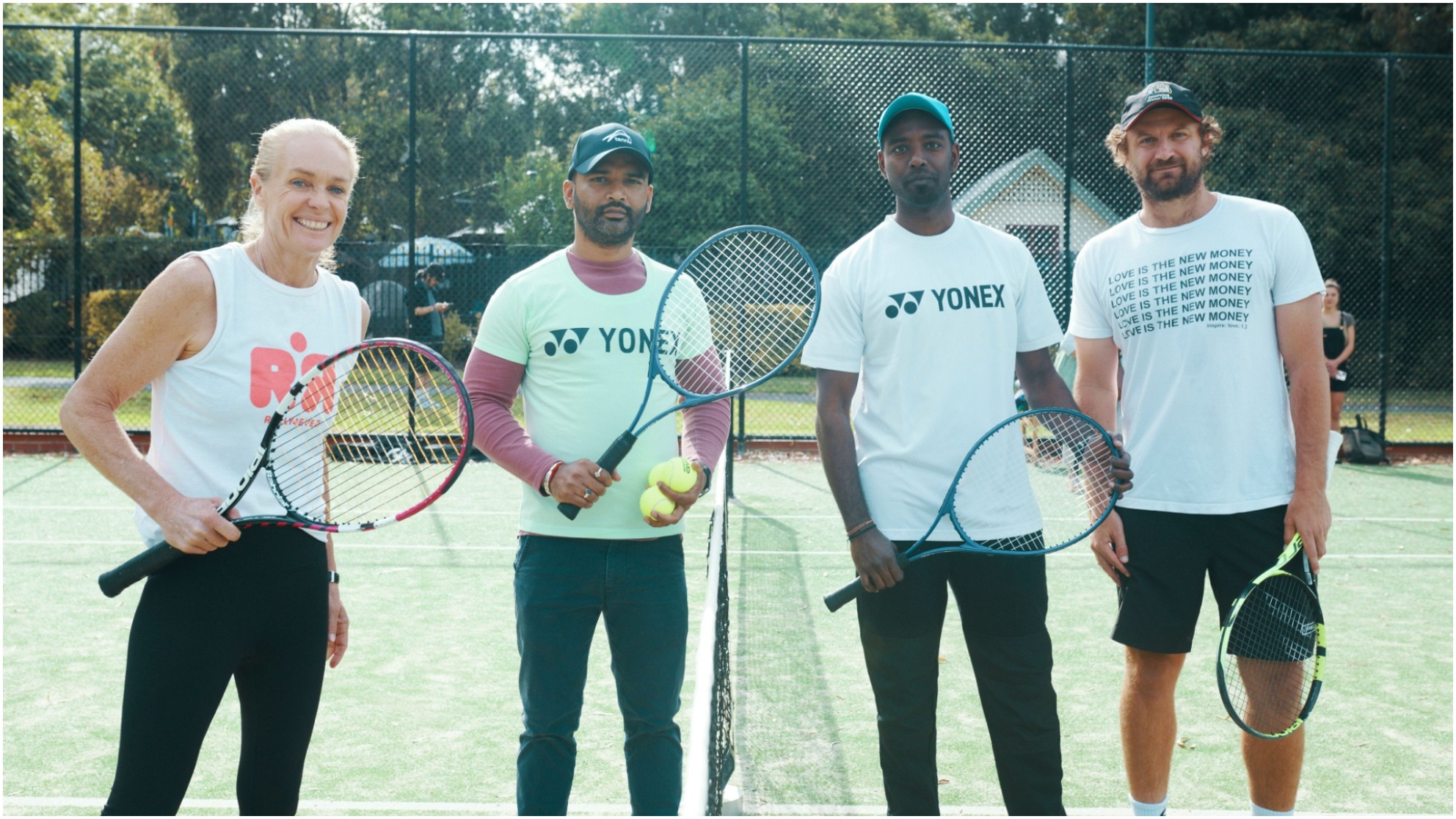 Founder of The CorriLee Foundation, Tanya Lee, said the event was such a hit that they’re hoping to plan another practice and ask the world number 1, Novak Djokovic, to attend.

“I know we all want to say we care and feel the love but bloody everyone donated their time. It was beautiful,” Ms Lee said.

“They’re hitting tennis balls and those last eight years would’ve been removed for a little minute and they genuinely looked like they had a nice time,” she continued. 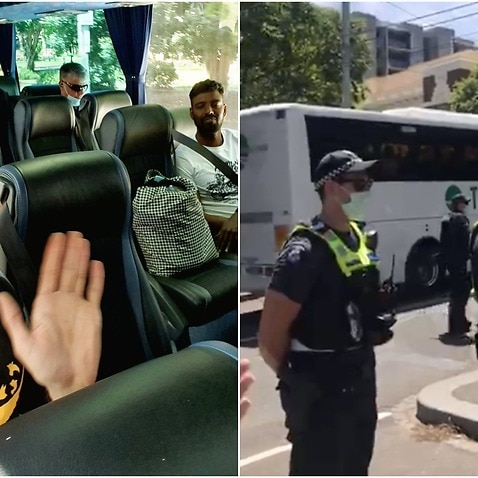 While Rally4ever founder and former professional tennis player, Louise Pleming, said the men were “all smiles” out on the court.

“What sport and tennis does is it totally absorbs you for that split second that you're hitting a tennis ball or you're returning a serve from John Millman or one of the pros, all your worries disappear for that moment,” said Ms Pleming.

“I just saw the joy of all of the guys having that moment as they played tennis, it was really wonderful. Quite moving for me,” she added. “Hopefully we can continue to help out, all the tennis players.”