Gerry Harvey’s Harvey Norman Group’s sister company ‘School Locker’ ran an advertisement for volunteers that has seen #BoycottHarveyNorman go viral. The retail union and an employment law expert have raised concerns about the program - and now Harvey Norman have announced they’ll cancel it.

Gerry Harvey, the founder and executive chairman of the Harvey Norman group, has been under fire for the 'School Locker' advertising campaign to hire volunteers who would assist families with school uniform purchases and would be paid with vouchers and store credits, instead of a standard wage.

The program began in late January this year with a total of 37 volunteers, however, the company has made a U-turn.

"[It] has been cancelled moving forward," a Harvey Norman spokesperson told The Feed. 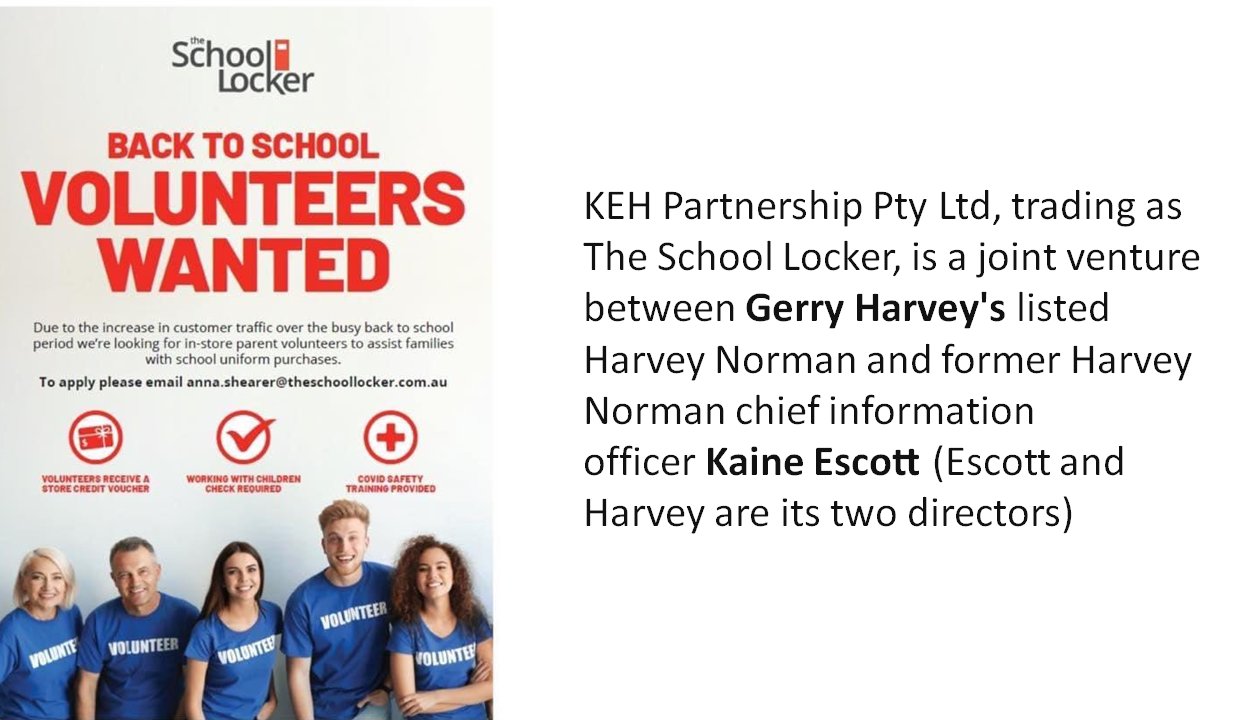 The advertisement for volunteers reads, "Due to the increase in customer traffic over the busy back to school period we're looking for in-store parent volunteers to assist families with school uniform purchases."

The ad surfaced online and saw the hashtag #BoycottHarveyNorman went viral as people raised concerns about the program.

They aren't alone. An employment law expert who spoke to The Feed has raised concerns over the validity of hiring volunteers instead of paid staff.

Many social media users shared feelings about their reluctance in purchasing from Harvey Norman after hearing about the volunteer program.

Well time to keep up my boycott of not going to Harvey norman. #boycottharveynorman

Some have pointed to that despite many businesses falling on hard times during the pandemic, Harvey Norman has seen huge profits this year.

Considering Gerry Harvey want's volunteer sales staff at his outlets even though skyrocketing profits up 160% in Q1.

On Wednesday, Harvey Norman announced an increase of 160 per cent in the first quarter of the new financial year.

Between July and November this year, Harvey Norman has seen a sales increase by 27.5 per cent, which includes stores overseas and in Australia.

Back in August, after seeing a rise in revenue and profits founder Gerry Harvey called the news the “greatest bonus of all time”.

"To get [comparable] increases in the magnitude of 30 to 40 per cent...it's never happened before,” founder and executive chairman Gerry Harvey told the Sydney Morning Herald.

“For me, it's an awakening, especially as we went into it thinking we had big problems, but it ended up being the greatest bonus of all time.”

It’s a grey area according to Giri Sivaraman,  a Principal at Maurice Blackburn, who leads up the firm’s Queensland employment law department

“I find it perplexing. And it's probably unlawful. I don't understand why a retail company needs volunteers,” Sivaraman told The Feed.

He believes the company should engage with staff as employees to ensure they have the appropriate protections within the Fair Work act, like minimum standards of pay.

In a statement provided to The Feed a Fair Work Ombudsman spokesperson said information about unpaid work including the key elements of a “genuine volunteering arrangement” can be found on their website. Some unpaid work is lawful but depends on the arrangements made, and lawful unpaid work includes vocational placements where work forms part of a training or education program.

“Anyone with concerns about their pay or workplace entitlements is encouraged to contact us directly,” a spokesperson said.

“Volunteering is usually where you're assisting charities, pro bono operations, organisations that aren’t trading and trying to make a profit,” he said.

“It is probably lawful...But this avoidance of paying wages is what we would say is morally reprehensible,” Cullinan told The Feed.

However, Cullinan says the structure of paying volunteers with store credit vouchers, which was detailed in the ad, is akin to a form of paid employment.

“It should be recognised as such. So any scheme or structure that is about avoiding paid employment should be rendered unlawful,” he said.

Sivaraman believes it would be different if a profitable company wanted to set up a charity, which had a separate board and intended to function as a charitable organisation.

“And the only connection with the company is that maybe the company provided some seed funding or sponsorship to it,” he said.

“Now if that charity on its own wants to engage volunteers that's a completely different proposition to this, where it seems to be just an offshoot company of the general Harvey Norman Empire.”

Cullinan is concerned that this volunteer program could have adversely impacted “cash strapped parents” who can’t afford new school uniforms for their children, whose school may have a relationship with the School Locker.

Cullinan says, "there should be proper paid wages for those workers".