The spread of COVID-19 has seen the rapid shutdown of music events and arts and performance spaces across the country, creating a ripple effect of income loss for everyone touched by Australia’s creative industries.

Jess Cerro, better known by her stage name Montaigne, was Australia's Eurovision candidate right up until this morning, when the song contest was cancelled due to the coronavirus pandemic.

Cerro found out the news earlier today, when she woke up "and had like ten texts from different people just being like 'I'm so sorry'."

"During the devastation and afterwards I just felt a little paralysed." The cancellation is no real surprise; COVID-19 has already prompted a flood of event cancellations worldwide, with more dropping every day. Seemingly no industry has been spared, the music industry least of all -- Cerro lists off a string of performances which have been cancelled in the lead-up to Eurovision, representing a loss, she estimates, of six figures in potential income for herself and her team.

The ripple effect of that loss is immense.

"A portion of that stuff goes to my managers and my label, and also my band, and the venues, and the support acts who were going to be playing at the venues, and yeah. Everyone kind of loses out," Cerro said. 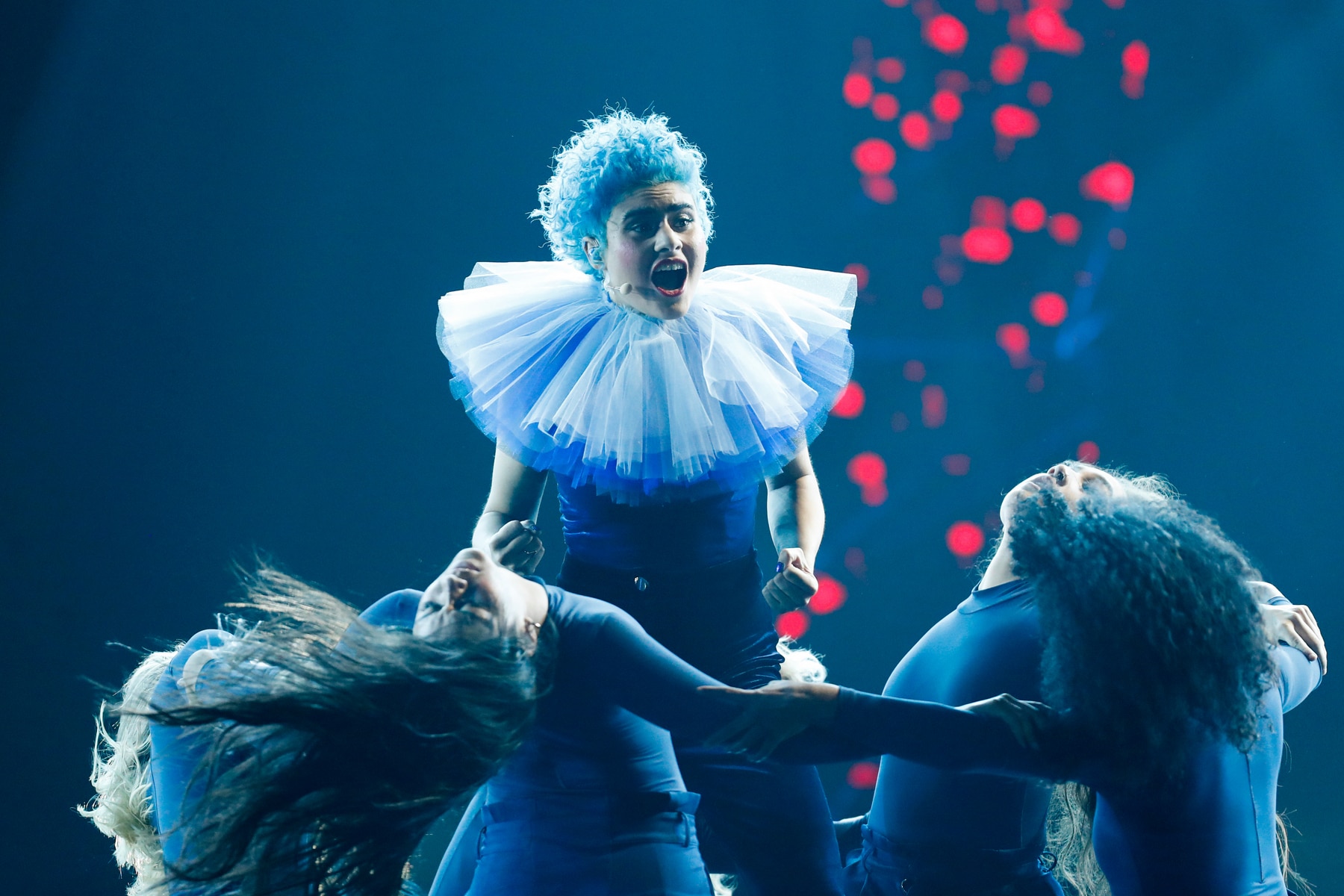 2020 Eurovision - Australia winner Montaigne performs Dont Break Me during the final at the Gold Coast Convention and Exhibition Centre.
AAP

It doesn't help that in the creative industries, most of these businesses -- Cerro's act included -- are often beginning from a position of simply breaking even.

"Something my business and I have always struggled with is making money," Cerro said.

"Because nowadays for musicians it's all like, gigs or sponsorships. And I don't take the majority of sponsorships or collaborations offered to me because I have a certain ethos as a human being and as an artist where I don't want certain values of mine to be sacrificed in order to take money from a company that, say, is wasteful, or exploits a group of people or animals."

"So we were already kind of -- I don't want to say struggling, necessarily, but it's been work for my team to figure out how to come up with money, and to find gigs for me to do so that all the business's expenses are covered, so we can pay people and I can live on it."

"The gigs I was going to do this year were going to put me in a safe, comfortable place. And now I'm not really sure, I guess."

It's unclear at this point whether this year's Eurovision contestants will be offered another shot at the song contest next year.

Gigs like Eurovision, music festivals and concerts sustain more than just the artist you see on stage. Right now, all kinds of creative workers are struggling, often out of view.

For an artist like Montaigne, the impact of coronavirus cancellations is, at the very least, months of uncertainty. Overnight, her job has transformed from one of rehearsing and training for a career-defining event to nothing at all.

For the team around her, the impact can be even more severe.

"The first person I think about is my booking agent, whose job is sort of redundant right now," Cerro told The Feed. What with the government ban on non-essential indoor events of more than 100 people, and the escalating, ever-changing nature of the crisis, there's just no way to book a music performance in Australia for the foreseeable future.

Then there are the smaller creative businesses that contribute to each performance, often from behind the scenes. Cerro points to Sasha Mutch, a storyboard artist who was scheduled to contribute backing art for her Eurovision performance, and Oats, a Melbourne clothing label run by a mother-daughter duo, which was making the costume.

"We were going to use for my Eurovision outfit clothes made by this mother-daughter team-up label -- a small, indie Melbourne-based label of a mother and daughter making these clothes, and they were beautiful."

"And now we don't get to help, I don't get to endorse their stuff. That must be happening to a lot of creatives all over the place."

The 'I Lost My Gig' website is attempting to calculate the economic impact of coronavirus cancellations on Australian creative industries.

So far, creatives have self-reported over $200 million in lost work opportunities following 220,000 event cancellations. More than 400,000 people have been impacted.

Emily Collins, the Managing Director of Music NSW, pulled together the I Lost My Gig Australia website in less than 24 hours with the help of a colleague, after being inspired by a US version of the project.

"It struck me as a great initiative in tracking economic impact amongst people who usually go untracked," Collins told The Feed.

In less than a week the reported impact on our creative industries has been immense, and it's only the tip of the iceberg. If you're an artist or creative worker and you've lost work due to the pandemic shutdowns, add your voice
--> https://t.co/p1jIltV6cw pic.twitter.com/W9pCuSjUYe

Australians who work in creative industries are encouraged to head to the site and report lost income resulting from the crisis. The data is sent to the Australian Music Industry Network and the Australian Festival Association, who plan to use it to lobby government bodies for adequate support packages.

"We've had nearly 8500 submissions to the site, and some of them are comedians, some of them are dancers, makeup artists, metalworkers who build stages and sets for big productions," Collins said.

"As far as we're concerned, a lot of these businesses and independent contractors fall through the cracks. They aren't represented by any organisation, they have no one fighting for them. There are just so many jobs that are largely overlooked."

"Artists are just the one public-facing part of that." "In many of these jobs, production jobs in particular, people work contract to contract, and they're staring down the barrel of no money," Collins said.

"People have gone from normal, stable incomes to zero dollars pretty much overnight, and there's a real level of despair around this. People have been impacted, their wellbeing is being impacted, and we're really pushing for anyone who's lost work or lost opportunities to get in touch with support agencies."

"We're still waiting on an adequate response from the government, because at this point we're calling for wage subsidies."

"The current packages don't go anywhere near supporting the people who'll be without income for the next couple of months."

While industry groups push for increased government support, Australia's creatives are doing what they do best: getting creative about the issue.

A CHALLENGE to Australian radio stations to play mostly/exclusively Aussie artists to jack up our royalties while we wait for our gigs to pick up again! 1 small, literally free way to aid local artists?

The tweet went viral, and Puru told The Feed that a few radio presenters have started to get behind the idea.

"I'd love to take credit for the brilliant idea, but I saw a couple of friends on my feed on Facebook talking about solutions, and saw that a friend of mine who's in a local Melbourne band had been discussing the prospect of radios getting behind artists. I just thought that it was a great idea, and I wondered why that hadn't been something that had been floated publicly," Puru said.

The impact of such an approach would vary for individual artists, but Puru believes it has the capacity to help.

"A great percentage of our income comes from royalties, so it makes quite a substantial impact. And at the moment you know, everybody's in a state of crisis."

"Making small changes to programming, which is something that doesn't take away from anyone, would be a great place to put our focus."

I think it's cool to think of ideas that are easily implemented, that don't put a strain on any particular resource, that can get us thinking about how we can support each other.

Right now, many other creatives are thinking similarly. In Facebook groups usually dedicated to sharing casual job opportunities for freelancers in the creative industry, people have begun to share any casual job opportunity they can find, mostly in short-staffed supermarkets struggling with the impact of COVID-19 in a very different way.

"Unfortunately this isn't TV work, but a friend from recruiting is searching for casuals to help at regional supermarkets to keep up with demand," reads a typical post in one such group right now.

"I know we'd all rather be writing, cutting, producing and filming right now but with so many jobs being cancelled, I hope this helps somebody."

Kira Puru, like Montaigne and so many other artists, has already personally taken a hit due to the coronavirus. So far she considers herself lucky, though the impact has been severe.

"It's hard to really say because I don't know how long this is going to go on for, but that obviously translates to a great financial loss for me personally, and then obviously for the people that work with and around me, the people that I employ -- my team obviously take that hit as well."

"The ripple-on effect of those gigs being cancelled is already quite overwhelming. I don't know what that means for the success of my career moving on from this, when we return to some kind of normalcy, whenever that is."

"Yeah, it's hard to fathom just how big the effect is going to be."

Right now, though, front and centre of Puru's mind is the knowledge that no one is exempt from this impact. This is a pandemic; the entire world is affected.

"I think the best thing we can do is understand that we're all in a pretty dire position right now, and no one person's loss or needs outweigh other people's," Puru said.

"I mean, we should definitely protect people that have compromised immune systems and are more at risk of being unwell, but understanding that everybody is in need right now I think is a great thing to remember."

"I'm really happy that the tweet has gotten so much positive response, but I don't want people to feel like musicians or artists are doing it harder than other people, you know?"

"I think what's most important is that we are kind to each other, and try to be as gentle and generous as we can. No one person is suffering greater than somebody else."

Coping through coronavirus: We're collecting voice memo diaries from Australians in isolation. Send us yours.

A quarantine cooking show for Covid-19

Is there a quick medical fix for COVID-19?

With a shortage on the cards, meet the people trying to create low-cost and reliable ventilators