Amongst the media coverage surrounding the missing people in the Victorian High Country, one particular theory has surfaced again and again; a man responsible for it all.

When Mandy Whitlock’s husband Conrad first went missing in the Victorian High Country, police launched a full-scale search; employing helicopters and search parties and imploring anyone to come forward with information that could assist in the search.

Outside the police station, Mandy stood emotional and exhausted and tried to explain the exact turmoil she was experiencing.

“I basically feel like I'm living in a movie, that it's not happening,” she told news crews.

“I've watched people being interviewed in this situation, and I always felt sorry for them, but you cannot imagine what it feels like.” Mandy and Conrad had been married for 52 years and regularly went skiing.
The Feed

Mandy and Conrad had been married for 52 years. They had had a spontaneous wedding, and would later race cars together, they even went skiing in Mount Buller regularly.

“We weren’t like your old married couple sitting there quietly,” she says of her relationship, “everything was always interesting.”

The night that Con went missing, Mandy would begin to imagine where he was and what might have happened to him before stopping herself in an effort to preserve her sanity. 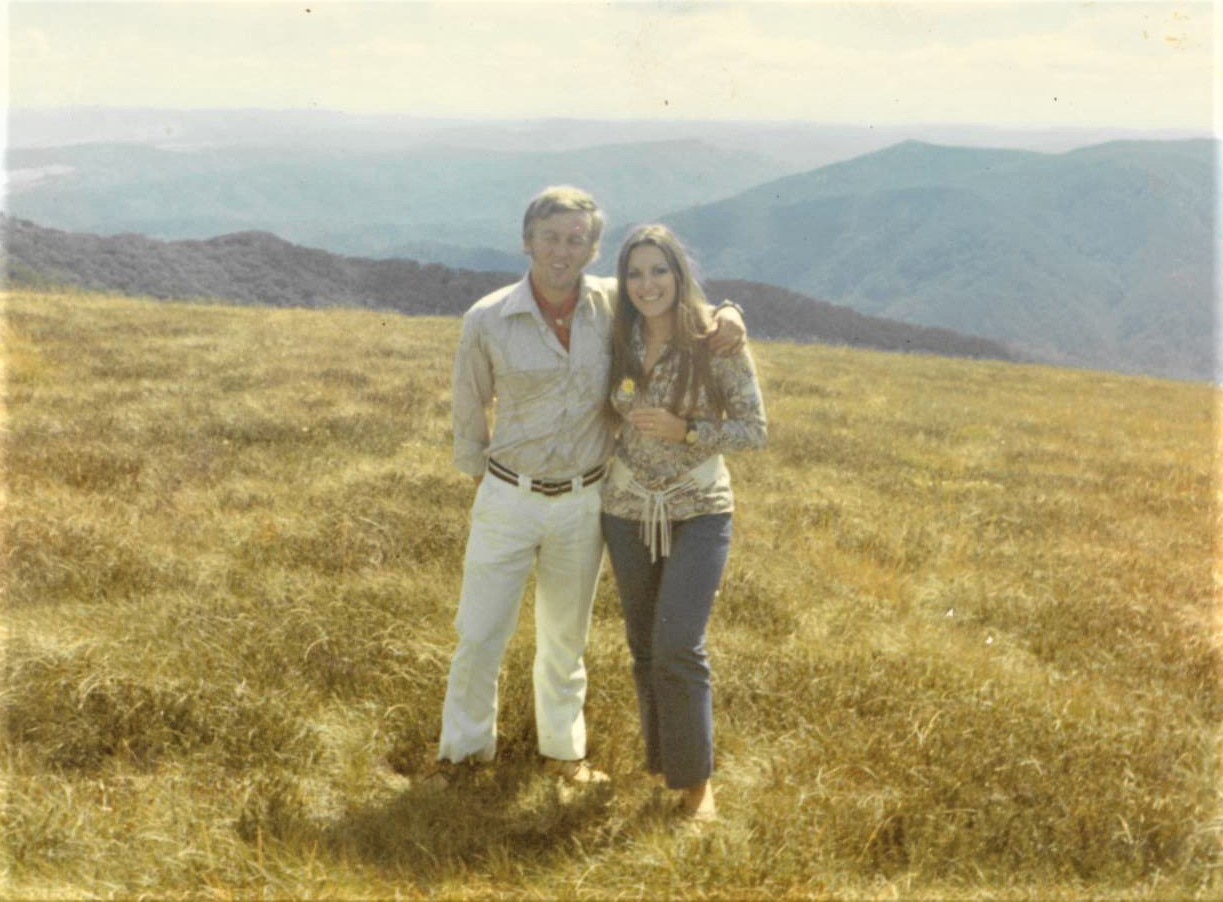 Over the next eight months, others would go missing, too - six people in fact - four found (not all alive) and two have never been seen again.

And then six became eight; Russell Hill and Carol Clay disappeared as well.

An elderly married man and a woman, who was not his wife, going missing together would unsurprisingly, catch the attention of both the media and the Internet.

To this day the search continues, as does the media reportage, and still, there is no trace of them. Conrad and Mandy before he went missing.
Supplied

As is quite often the case, first comes the mystery, and then the theories.

“You name it, but I'm sure the story has been thought up by somebody,” Mandy said of the wondering that surrounds her husband’s disappearance.

A simple online search of “The Button Man” returns pages upon pages of results, alongside words like “mystery”, “strange” and even “oddball”.

“[The Button Man] is known to people in the towns up there, he’s just a guy that likes living by himself,” Mandy explained. Mandy and Conrad in 2018, the year before he went missing.
The Feed

The most widely understood reasoning behind the name ‘Button Man’ or ‘Buttons’ is that the man in question carves buttons out of deer antlers; deer themselves are a widely hunted pest in the High Country.

“I think it's just one of those things that people like to write a story on,” Mandy reflected.

The need for a story – an understandable explanation – when a mystery cannot be solved is a deeply human thing, and that thing has a term known as “casual understanding”.

“We want to know why things happen in a certain way,” Professor Lisa Bortolotti told The Feed.

“We like causes, we like mechanisms, but they are much better if they can be structured in a narrative form, so if it is a story.”

Professor Bortolotti is an Italian philosopher based at the University of Birmingham, her work deals with how more widespread beliefs like conspiracy theories and boogeymen transpire and then stick.

She explained that when people go missing and we cannot ascribe fault to anybody in particular it makes us feel like we don’t have control, so we try to find an explanation that is easy to understand.

“Usually attributing fault to someone is a very easy thing to do,” Professor Bortolotti said.

“A boogeyman gives an easy solution if people disappear because there is someone who makes them disappear we just arrest that person, stop them from doing it again and the problem will not repeat itself.” Rhyll McCormack is a journalist at the Mansfield Courier
But when the so-called boogeyman is a real-life person who has not committed the crime in question, the impact that comes with ascribing fault cuts differently.

Rhyll McCormack is a journalist at the Mansfield Courier, being a local newspaper her beats usually include Mansfield and High-Country focused stories and issues; local government, sports and roads.

“The so-called button man is as local to Mansfield as you are going to get,” she said. “He was not a pariah in Mansfield, the way he was made out to be down in Melbourne.”

When the theories first began to circulate about the Button Man, McCormack made this local point of view clear with her front-page article ‘Button Man Trial By Media’. McCormack published a story called ‘Button Man Trial By Media’
The Feed
A line from her 600-or-so-word piece reads; ‘None of [the media outlets] claim he is guilty of murdering people gone missing in the Hills beyond town, but lines are most certainly being drawn.’

Outside of the media coverage, the talk of the Button Man continues today, and that talk has had a real-life impact on a person who has chosen a lifestyle consisting of nature and isolation.

“I think people have enjoyed making a boogeyman out of him, they really have,” Charlie Lovick told The Feed. Mandy says she's heard every theory there is about her husband's disappearance
The Feed
Lovick’s family have been in the High Country for generations, he is proud of the area he lives in and the history that comes with it.

“One TV company rang me up and wanted me to take them up and basically corral him and interview him,” Charlie said of the fanfare.

“There's still people driving out there to find the Button Man and point him out and take photos of him or whatever, it's destroying his value of life.”

When asked how people can avoid the conspiracy or boogeyman wormhole Bortolotti suggested that“It’s much easier to try not to believe things so quickly, rather than change your mind once you have invested in a theory.”

And despite the pain of it, this is the route to acceptance that Mandy has taken. Prior to his disappearance, Conrad was experiencing headaches and went missing the day of his scheduled MRI.

“The way I've tried to make sense of it is that he had the headache, so he must have had an underlying medical condition,” Mandy said.

“I think the way I've made peace with it is that he's had a good life.”

“I would just basically like to know that that area on the road to Mt. Buller is his last resting place.”

In a statement to The Feed, Victoria Police said:

In terms of people trying to seek out individuals they feel are involved, this is something that we absolutely do not condone and we strongly discourage anyone from partaking in this kind of behaviour.

The Victoria Police Missing Persons Squad is well-equipped, trained, and is comprised of investigators with relevant expertise and experience for investigating matters of this kind.