Changes to the recruitment process at Fire & Rescue NSW means 50% of this year’s new recruits are women. Some insiders, women included, are worried an 'unfair advantage' for women will weaken the firefighting service and result in women being bullied.

In December last year, I got a media release from Fire & Rescue NSW that said, “changes to the highly-competitive recruitment process,” mean 50% of this year’s graduating class would be women. Right now, only five per cent of firefighters in NSW are women.

I’m a feminist who works at SBS – you know, the place where diversity is our drug of choice – so this media release ticked all my boxes for a feel-good story about female empowerment.

But now that I’ve finished the story (you can watch it above), I’m not so sure.

The changes mean male and female applicants are now split into two separate streams and an equal number from the top of both streams get picked for the job. Basically, a male applicant who ranks in the 51% percentile of his gender stream will miss out on a job because of the gender quota – even if he got a better score on his tests than a female applicant.

Female firefighters who enter the workplace as grads from the quota system are worried about being bullied by men who think they don’t deserve to be there.

I was invited to film in the Sydney Metropolitan fire station; the state’s biggest and best. But as we walked through the very impressive fire station I scanned the firefighters around me and remember thinking, “so white, so male.” 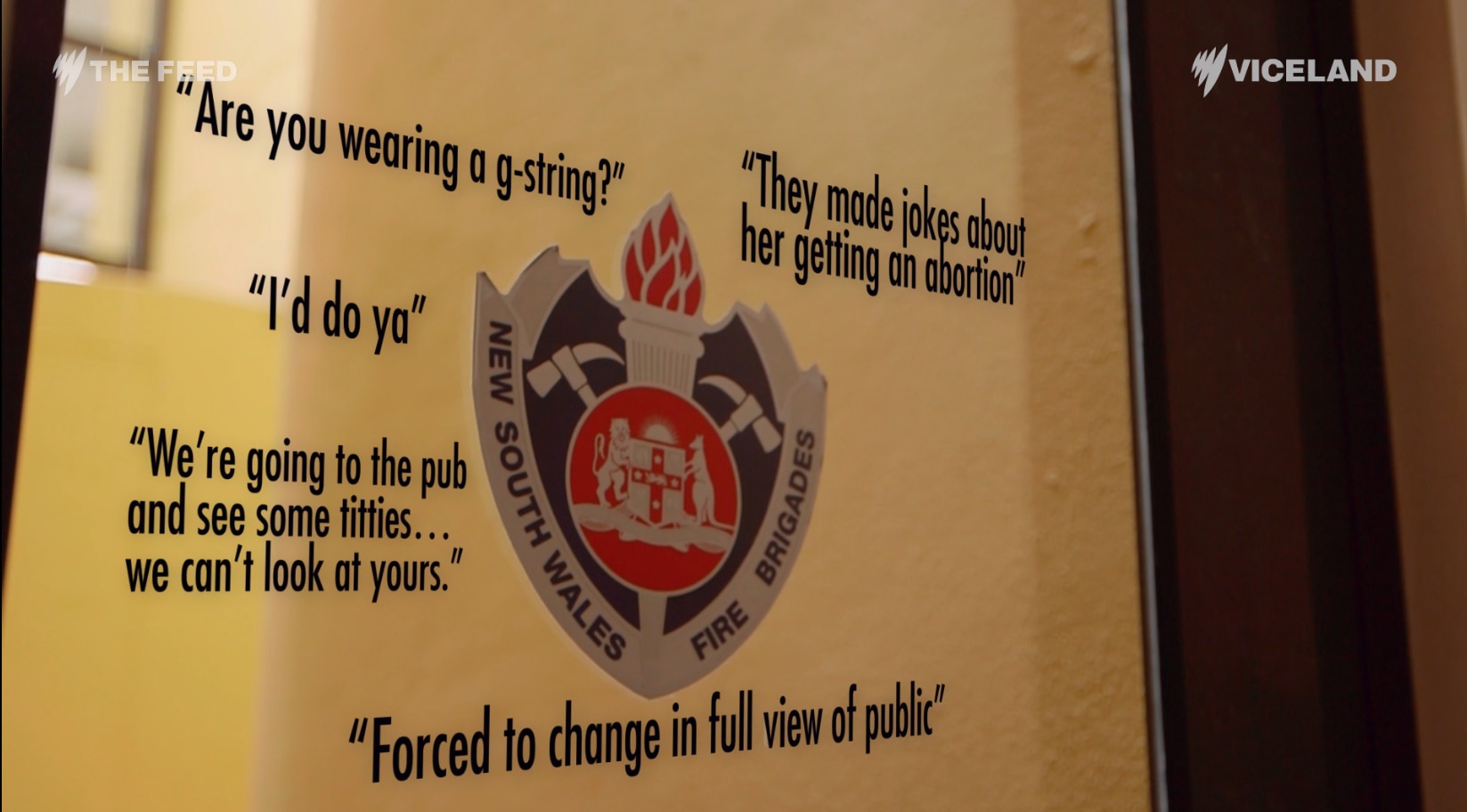 A handful of the accusations of sexual harrassment made by female firefighters.
SBS

Obviously, this is a place with a diversity problem. Add to that the shocking allegations of bullying, harassment, cover ups, sexual harassment and even rape which I touch on in my story and you get the sense that their image needs a serious makeover.

You’d think that gender quotas would be a good place to start working through some of this.

But pretty quickly it became clear to me that many of the male firefighters I was speaking to thought the quotas were lowering standards.

They said things like, “if my child was in a car accident, I’d want the best firefighter to rescue her, not a diversity quota.” I felt my cheeks burning up with the unfairness of what they were saying. I was knee-jerking all over the place. But despite this I found myself not really being able to argue against it.

Men taking issue with gender quotas is one thing. But women saying more women would make their job harder… that’s another.

Men taking issue with gender quotas is one thing. But women saying more women would make their job harder… that’s another.

It’s a point that was driven home for me when I spoke to Rachel Cowling, a senior firefighter from Melbourne.

Rachel is a fifth generation firefighter and all the men in her family are firefighters – her surname is a bit of a big deal in the firefighting community, I’m told.

When Rachel was 20, she was one of just 30 applicants in a pool of 5,000 -- nearly all men -- to be recruited. At 33, Rachel’s now the same rank as her father. No small feat for a woman from Victoria, a state where only four per cent of firefighters are female.

So when the Melbourne Metropolitan Fire Brigade introduced gender quotas similar to those in NSW, I was surprised to learn that Rachel and her female union members protested the move.

Here’s the thing: female firefighters who enter the workplace as grads from the quota system are worried about being bullied by men who think they don’t deserve to be there.

Trying to push for equal numbers at time of recruitment is too late in the process.  If we want a firefighting service that looks more like the communities they serve, then we need to get more women to apply for the job in the first place.

Getting female firefighters to talk at high schools and appear at community events and sponsor female sporting teams is an approach to building diversity that everyone can get behind – and it works.

The ACT fire brigade did this kind of grassroots recruitment and had a 500 per cent rise in female applicants. It doubled its female intake in a year.

I should point out, that after all this I still think gender quotas have a place in some workplaces. Government is one of them. Boardrooms are another, where only 23.6 per cent of top jobs belong to women.

Not everyone can be a firefighter. One former female firefighter even told me she now believes it’s not a job for any woman. I disagree. Women like Rachel are living proof that they are just as capable of doing the job as men. But then again, women like Rachel got in on their own merit, not a diversity quota.