The website of the disability royal commission is, ironically, quite difficult for many people with disabilities to use. One disability advocate stayed up all night to build a solution.

When disability advocate Sam Connor first saw the official website for The Royal Commission into Violence, Abuse, Neglect and Exploitation of People with Disability, she noticed a glaring issue -- it wasn’t designed well for the very people it was built to help.

The site was quite difficult for many people with disabilities to understand and use.

For one, the first sentence on the homepage has more information about “His Excellency General the Honourable Sir Peter Cosgrove AK MC (Retired)” than it does about the purpose of the royal commission. 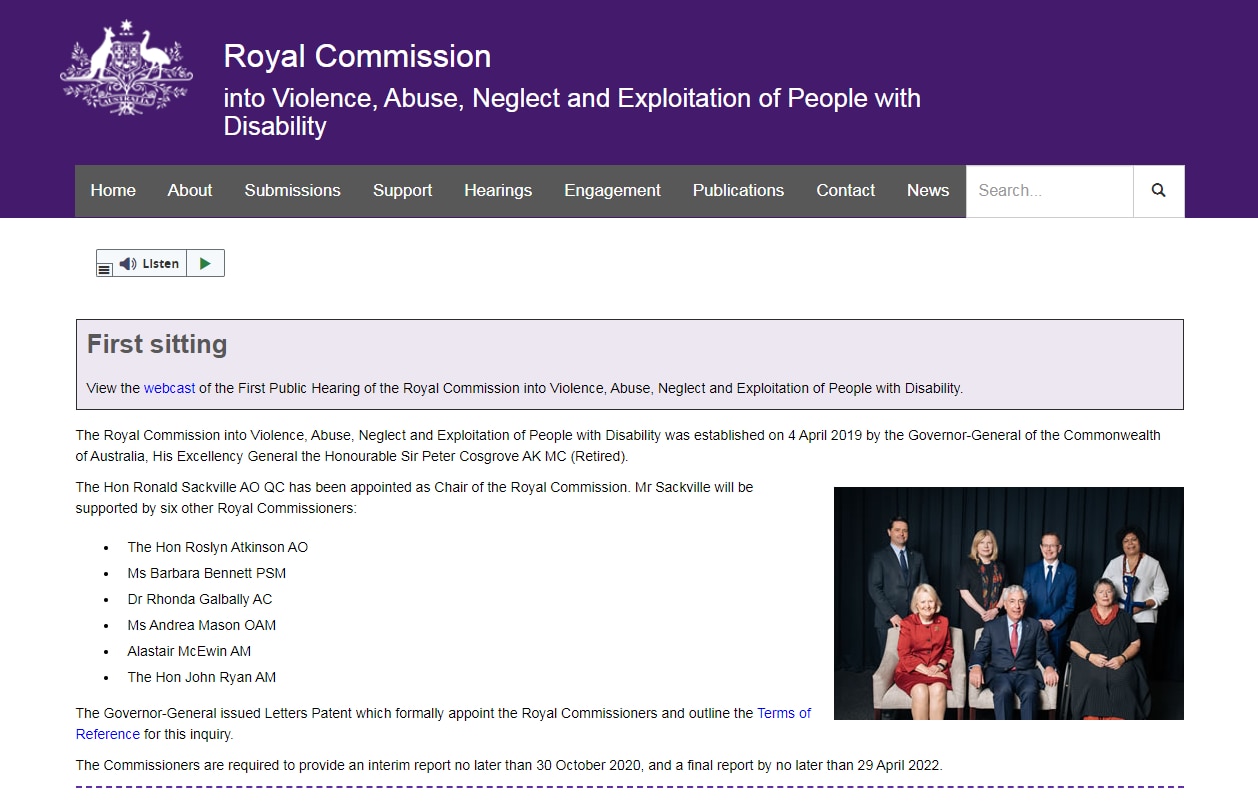 The “Easy read” submission form is also 35 pages long, and requires users to install Adobe Acrobat before getting started.

So Sam stayed up all night... and launched a new website herself.

“It’s our royal commission, and it needs to be for us,” disability advocate Sam Connor told The Feed.

Last night, we cracked it after looking at the #DisabilityRoyalCommission site. Inaccessible lingo, outdated information & bad content. So we've made our own, just for you. https://t.co/ksIgRpCgrS
Right, RC staff - if this took 12 hours for under $100, what can YOU do? #auspol

“There were a lot of bureaucratic words, a lot of information about things like ‘letters patent’, which is legal jargonese which people don’t necessarily understand, or need to know.”

The website Connor created does exactly that. The “Disability Royal Commission: Unofficial Information Site”, sets out the steps people need to take to share their stories with the royal commission - in clear, large-print text.

“I did that with $100 over 12 hours, staying up all night between days at work,” she said. “You’d think with half a billion dollars they’d have the resources to find out how to do it.” While the official royal commission website does include some accessibility features, like Easy Read and Auslan translations of key documents, Connor is concerned about other oversights.

“There’s a lot of assumptions in there, that people have things like access to a computer. Like, it says that before you start typing into this form, you’ll need to save it to your computer, open it in Adobe Acrobat, finish it and email it to us.”

“For a lot of those things, you need support. What happens if you’re living in a group home and you’re being abused by a support worker, and you need to ask that support worker to open the form and help you type it?” The Easy Read instructions on the official royal commission website ask readers to download and install software.
Royal Commission into Violence, Abuse, Neglect and Exploitation of People with Disability

Greens Senator and spokesperson for disability rights Jordon Steele-John told The Feed that Connor’s work should be applauded.

“She spent twelve solid hours and $100 bucks of her own to do something the royal commission should have already done, and that’s build a website that’s accessible for disabled people,” he said.

“What I think is really sad about the whole thing is we’ve done this before -- we had the child abuse royal commission.”

“That’s really seen as the gold standard of how you run a royal commission, and it seems that instead of learning from that and building on its work, they’ve started from day zero and rushed the whole thing into existence.”

“We didn’t give them half a billion dollars to do the bloody minimum and get the job over and done with.”

Steele-John told The Feed that he’s concerned about the preparedness of the disability royal commission to go forward with hearings, the first of which is scheduled for next month.

As of last week, the royal commission reported that it was still in the process of “scaling up” and hiring for services like support hotlines, counselling and legal advice for people making submissions.

“At the moment, the royal commission is not really living up to its commitment to put disabled people at its centre,” Steele-John said.

“If it did, it wouldn’t go ahead with the November hearings.”

The royal commission told The Feed it expects to have an upgraded website by the end of this year.

“The website was set up at the outset of the Royal Commission to ensure information was available as quickly as possible. The understanding has always been that the website would be updated as soon as practicable.”

A spokesperson said the current website had been reviewed by Vision Australia, adheres to Web Content Accessibility Guidelines enabling screen readers to be used, and provides transcripts, captions and Auslan translations “where appropriate”.

“We have been consulting extensively on our draft accessibility statement, including extending our round of public consultation due to demand."

We are now in the process of finalising the Accessibility Strategy in response to the feedback received.

“We have not received any complaints about the accessibility of our website via our email or phone lines but would encourage anyone with feedback or concerns to contact us directly via email DRCEnquiries@royalcommission.gov.au or call us on our Hotline, 1800 517 199 or +61 7 3734 1900.”

To date, the royal commission has received 200 submissions, and 1,234 calls to its hotline.

However, Vision Australia has since disputed parts of the statement made by the commission.

The not-for-profit said it wished to clarify that the 'review' the commission referred to was a consultation -concerning an early draft of the website templates, with no content in place.

"Following this consultation, Vision Australia advised the Department that a full accessibility audit, supported by user testing by persons with disability, should be carried out on the final version of the website to ensure it meets Web Content Accessibility Guidelines (WCAG) 2.1 Level AA conformance, and provides a greater user experience for persons with a disability."

Vision Australia has not been involved in such an audit or user testing and has not issued advice to the Department that the website is WCAG 2.1 Level AA compliant.

"It is possible that the department carried their own accessibility checks without Vision Australia's involvement. Without conducting a full audit of our own, Vision Australia cannot state if the website is currently WCAG compliant."

Steele-John and Connor hope their criticisms will help address the accessibility issues, before it’s too late.

“The commission remains an opportunity to get justice for disabled people,” Steele-John said.

“All I want as an MP is to be able to look people in the eye and say this commission is fantastic -- tell your story, you will be safe and supported. The last thing I want to be doing is spending any time criticising this commission.”

“Everybody wants this commission to succeed, nobody more than disabled people.”