Thousands of sexually explicit images of underage girls and women have been uploaded onto a forum without their consent. Victims of the forum told The Feed they feel violated and humiliated by the site.

The international forum -- which The Feed has chosen not to name -- includes naked images of women and underage girls from all over Australia.

The site was shut down by Dutch authorities in 2018 and several men from The Netherlands were arrested. But what appears to be a reincarnation of the forum has now resurfaced, with its archives dating back several years.

On the forum, anonymous users trade what they call “wins” -- meaning sexually explicit images -- through Kik, Discord, Snapchat, Wickr, Mega and a number of ‘underground’ websites.

The images are sourced from social media accounts, users' personal collections and taken in public without victims’ knowledge or consent.

Users on the forum have also uploaded screenshots of alphabetised folders, containing images of women from specific regions and suburbs across Australia. 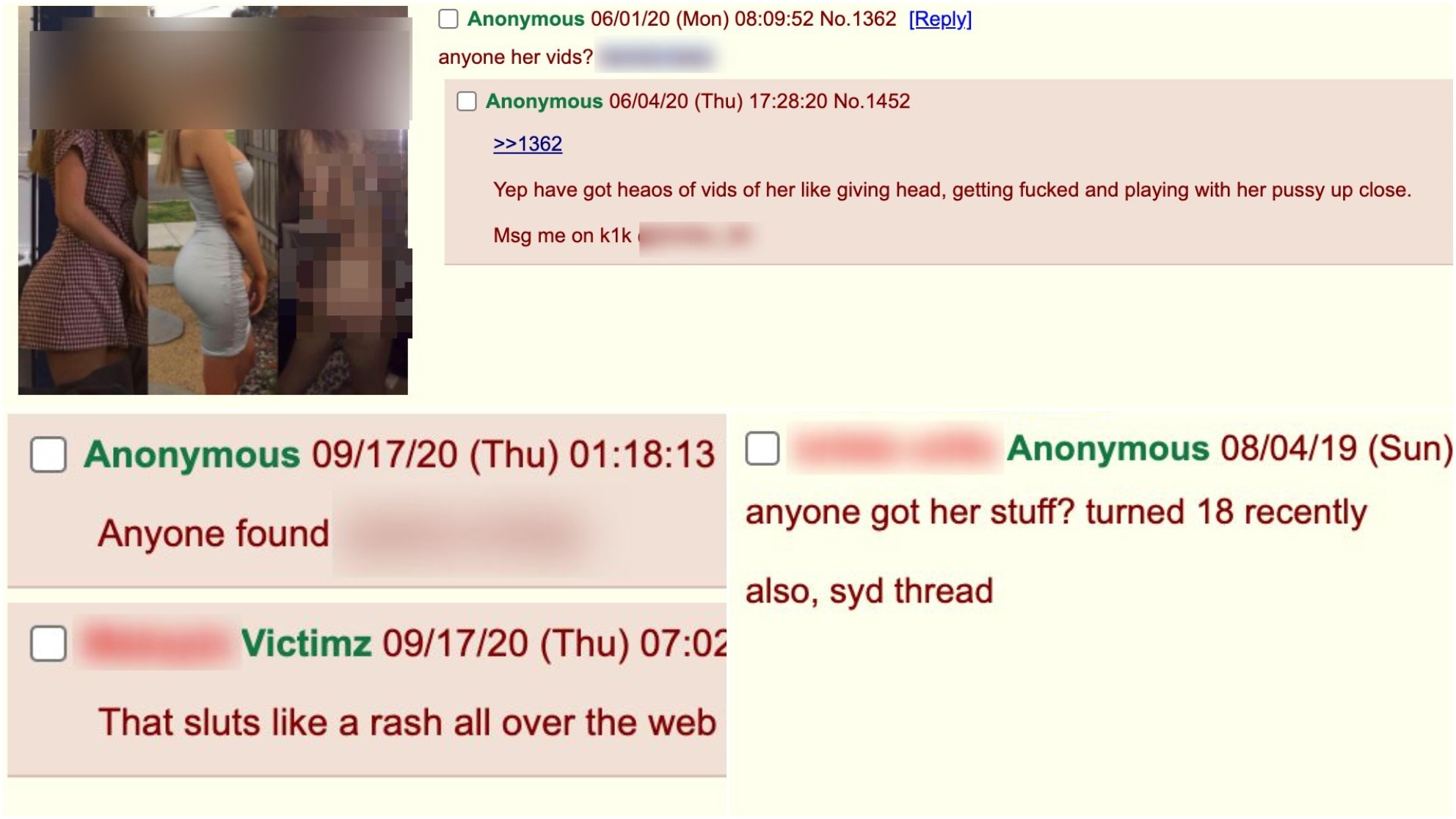 A screenshot of the forum.
The Feed

On the forum, women are labelled “sluts” and other demeaning terms and their names and private social media accounts are shared.

One image includes a close-up of a girl’s genitalia while she appears to be dressed in her school uniform.

In another thread, a user uploaded images of a woman which he said were posted by her ex-partner onto Facebook after the pair broke up.

The Feed has heard from a woman who says she saw explicit images of her friend, who’s now in her 20s, shared from when she was 14 years old.

Bec, who’s also in her 20s, told The Feed that several of her images were posted onto the forum, including one where her breasts are exposed.

Bec "has fucked half the northern beaches. Surely someone has wins,” one anonymous user wrote.

“Loves showing off her fake tits,” added another.

Bec said she was made aware of the forum after a friend sent her a Tik Tok video that warned US women about the site.

“I saw my photos on there and I was like freaking out and I called my best friend and started crying. And because I work in childcare, I thought it was going to get back to my bosses so I had to make my director aware of it,” she said.

"Rules" of the forum.
The Feed

Bec claims she reported the forum to NSW police, who informed her they’d had another report about the site. But she said it’s been several weeks and she still hasn’t heard anything back from the authorities.

In a statement to The Feed, a spokesperson from NSW Police said: “It can be difficult to investigate matters where adult victims are involved who have consensually sent naked images of themselves to others.”

“There are often difficulties in tracing possible offenders as many of the websites enable anonymous posting, and when the website is based overseas it can become problematic to have the images removed,” the spokesperson added.

“The best advice is to think very carefully before you send naked pictures of yourself. Once you hit send, you lose control over the situation.”

“Anyone who has had images of themselves posted or shared online without their consent is encouraged to report it to police and, if possible, contact the site owner to have the image removed.”

Bec suffers from anxiety and depression and said the site brought up the same “unsettling feeling” from when she had a stalker in the past.

But she’s most concerned about underage girls and high school students who’ve had their images posted onto the forum.

“Imagine if you were 15 years old and had a photo of yourself up there. You would literally think your life is over,” she said.

“When people think like that they don't think rationally and bad things can happen. And, you know, I was like, ‘Oh my god, some girl's gonna commit suicide over this site’.” 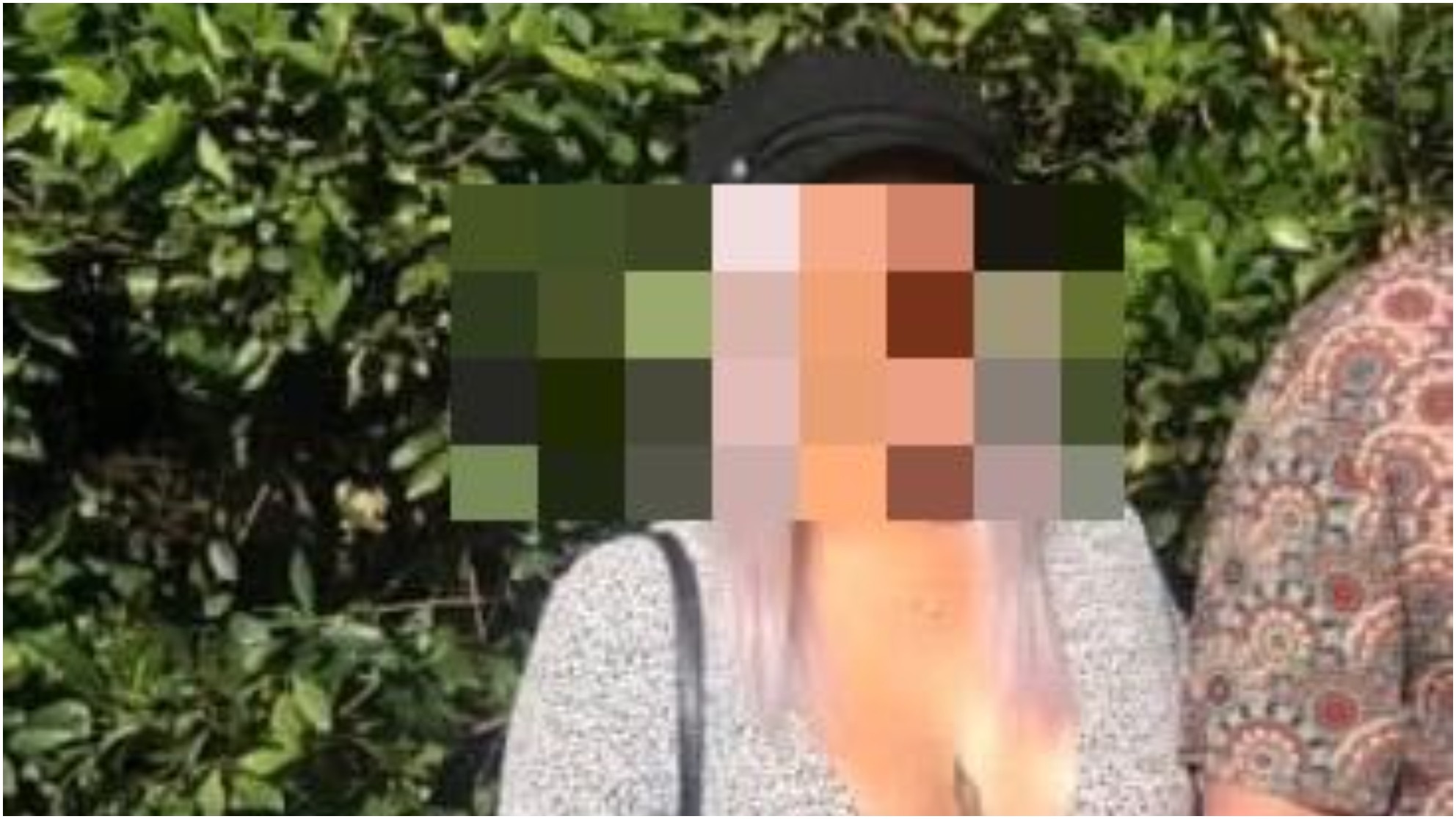 Bec was made aware of the forum after a friend sent her a Tik Tok video.
Supplied

One victim, who requested not to be named, told The Feed there’s a video of her on the forum that was captured by an individual without her knowledge when she was just 16 years old.

In the five-minute video, she's seen in public in Melbourne, adjusting her breasts as she looks at her phone.

“All I would say is, it’s a complete violation and it’s just sick,” she told The Feed.

“I have taken measures to have them removed, but there are [still] many underground sites.”

The Feed spoke to another victim who said several of her images were taken from social media and edited to make her appear topless or completely naked.

“I was wearing a bikini in the one facing away from the camera and they have edited it out. And in the one where my chest appears exposed, I was completely covered wearing a bra in a restaurant,” she said.

“Knowing that someone out there spent time doing so just makes me feel sick.”

“You take one down and another is reborn”

e-Safety Commissioner Julie Inman-Grant said she’s known of the imageboard since 2015 when it was a far more “robust site that catalogued the images of young school girls according to country, using the very unflattering ‘Aussie Sluts’, ‘American Sluts’ or ‘Canadian Sluts’.”

“The FBI led an effort to get it taken down but often what we see in this space, particularly with rogue sites, is what we call the phoenixing of new sites. So you take one down and another is reborn.”

Ms Inman-Grant said her team have been tracking the new site since they first learnt of it a few months ago but it’s like a game of “whack a mole” trying to get images taken down.

“We’ve identified where it’s listed and while it has a Russian domain, it’s hosted in a neighbouring country. While we’ve had success in terms of getting non-consensually shared images taken down, particularly of minors under the age of 18 -- which makes it child exploitation material --- getting the site taken down by a host country is a more challenging thing because they can just appear somewhere else.” 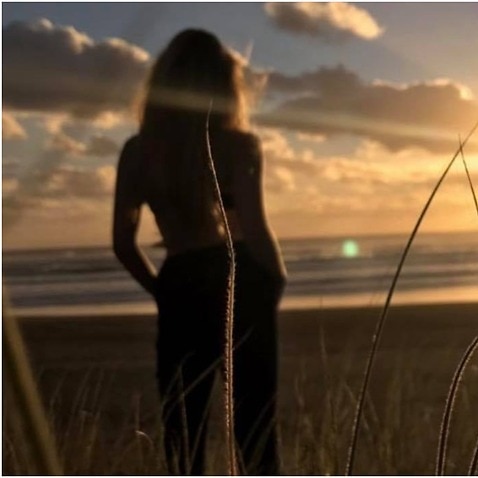 The forum has a list of rules such as users should not post “any images containing minors” or request “personal information”. But these supposed ‘terms’ have consistently been broken by its anonymous members.

Ms Inman-Grant said the site has responded to some government requests to take images down in the past but it’s mostly concerned about uploading as much content as possible without considering “the harm or the hurt that it’s causing the subjects in the picture.”

But she said the e-Safety Commission has a 90 percent success rate when seeking the removal of image-based abuse.

“We have not yet tried our civil penalties around image-based abuse and it’s very difficult to prosecute and make those stick. That’s why we’re trying to work cooperatively with authorities and hotlines in host countries.”

The Feed has contacted the administrator of the site but has not received a response.

A survey by RMIT and Monash University found that 1 in 3 participants had experienced at least one form of image-based abuse.

The survey revealed those aged 20 to 29 were the most likely to be victims of image-based abuse, followed closely by people aged 16 to 19.

Under Commonwealth law, it’s an offence to transmit, or threaten to transmit, an intimate image of someone without their consent, carrying potential penalties of three years’ imprisonment.

Another woman's images that have been posted onto the forum.
The Feed

There are also further specific offences which vary depending on each state and territory.

Dr Anastasia Powell is an Associate Professor in Criminology and Justice Studies at RMIT University.

She told The Feed that many victims of image-based abuse are unlikely to report to the police due to feelings of “embarrassment and humiliation” as well as “fear that the perpetrator will further harass” them.

“Many victims experience serious psychological distress as a result of image-based abuse. There can be long term impacts on mental wellbeing, as well as impacts on victims' education, employment, and social connections,” Dr Powell told The Feed.

Dr Powell said men were about twice as likely to be the perpetrators of image-based abuse than women.

“Our survey found men who perpetrated image-based abuse typically down-played their behaviour as 'fun' or to 'impress friends', though many also said that they wanted to harm the victim by embarrassing them or trying to control them,” she told The Feed.

“It is no coincidence that hidden online forums of mostly men are trading in nude images of mostly women while using derogatory language that dehumanises the victims of this image-based abuse,” she added.

“We need to work directly with young men, in particular, to prevent the sexist attitudes and male peer group cultures that connect with each other over their shared abuse of women.”

Bec said the site shows that there are entrenched double standards for men and women.

“If a chick sends a photo on Snapchat to a guy that she likes or something, it's like instantly screenshotted or like, just sent around into group chats. It's really vile and gross,” Bec said.

“I made an Instagram post about the forum and was talking about how many guys had sent me unsolicited dick pics that have girlfriends. And I've never once screenshotted that and shared them around because I'm not that type of person,” she added.

“If they thought of it like that's my sister, that's my mum, that's my brother or that's my boyfriend, I think people would think of it differently.”

You can report image-based abuse to the e-Safety Commissioner at esafety.gov.au.