Students at the prestigious Shore School in North Sydney have been warned they’ll face expulsion if they participate in a supposed year 12 muck-up day plan packed with illegal activities. Experts say the plan had sexist and racist overtones and revealed a shocking sense of privilege and entitlement.

Shore School has notified police after a document emerged, indicating a “crime-filled” scavenger hunt had been planned by a group of year 12 students for Wednesday night.

The document, which was obtained by the Sydney Morning Herald, included tasks such as kissing a girl under the age of 15 and an "Asian chick" and having sex with a woman who weighs over 80kg, is aged over 40 or one who is deemed "3/10 or lower [unattractive]".

Other ‘challenges’ included "sack whack [hit the male genitalia of] a complete random walking past", "spit on homeless man" and "rip a cone on the Harbour Bridge".

Students were required to document the completion of tasks on Instagram but were instructed not to "have anything unlawful in the photo" or document any "inappropriate or sexual" activities”, according to SMH.

"If anyone gets caught by a teacher/cops they will say that they were just having fun between the 5/6 of them and won't mention the tournament," the instructions read.

The plan -- dubbed by those online as “sexist” and “depraved” -- drew widespread outrage.

“So I went to Shore and feel obligated to say: Private schools deserve to have public funding taken from them. Boys are kept in a cocoon from the real world until leaving. And single-sex schools (particularly religious ones) seem antiquated,” one Twitter user wrote.

“Our muck up day was vegemite on handrails, polystyrene balls strapped behind cardboard blocking the library entrance & shaving cream on teachers car windows. Not for a second did we consider anything offensive,” another person added.

The attitudes displayed here are depraved.https://t.co/Zkj24g5oGl

Dr Michael Flood is a sociologist and Associate Professor at the Queensland University of Technology School of Justice.

He told The Feed the students’ muck-up day plan is “a familiar story of all-male elite institutions and toxic and anti-social and sexist peer groups.”

“What we know is hypermasculine cultures can breed precisely this kind of entitled, anti-social behaviour,” Dr Flood said.

“There’s also a sense that they’re born to rule. That the world will be handed to them on a plate and they will leave school, they’ll go to an elite university and they’ll take up positions running industry and running government and receiving large salaries,” he added.

Dr Flood said he suspects “the willingness of those boys to plan this behaviour” is driven by a “sense of entitlement and sense of impunity.”

“Really it’s a sense that they can flout standards, they can show contempt for others, they can literally assault other people without much risk of punishment,” he added.

The scavenger hunt comes after schoolboys from an elite all-boys school in Melbourne sang sexist chants on a tram last year.

In recent years, there have been similar scandals at the University of Sydney colleges and Australian Defence Force Academy.

In 2017, Shore School apologised after year 12 students and a teacher were pictured standing with a Nazi flag and saluting. 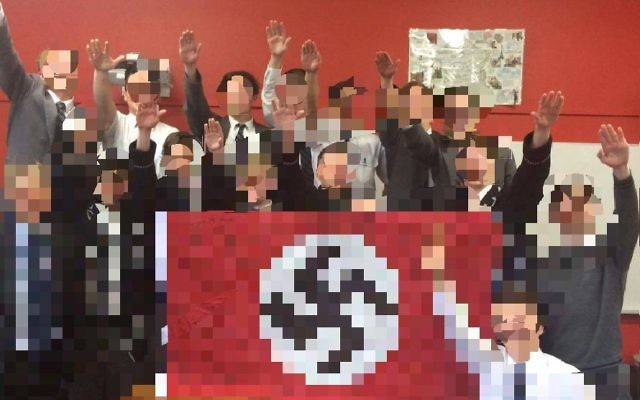 Shore school students and a teacher salute while holding a Nazi flag.
AJN

At the time, the headmaster of Shore School Dr Timothy Wright labelled it an “ill-conceived prank” and a display of “very poor judgment by those caught up in the euphoria of the end of school”.

Earlier this year, students were ordered by the school to remove a Tik Tok that boasted of its lavish facilities including a “$50 million gym and a library with harbour views”.

David Shoebridge from the NSW Greens called the video “deeply offensive” as students could “see how unfair and unbalanced school funding is.”

Catherine Driscoll is a Professor of Gender and Cultural Studies at the University of Sydney.

She told The Feed there may have been a “collective transgressive thrill” that motivated the students’ to write the document.

“They’re setting up to break and contravene norms that those boys know are widely held. They know you shouldn’t do them and they know a degree of concealment is necessary,” Professor Driscoll said.

Professor Driscoll said it’s likely that the real-world consequences and the potential harm caused to future victims were not considered by boys at the school.

“There’s no thought that these people would have feelings or any repercussions for them individually. It’s swept up in this big narrative of the carnival escapade and boys gone wild,” she said.

“The document appears to be the work of a small number of boys who are not representative of our wider Year 12 group,” Dr Petterson added.

“The activities are unlawful, harmful and disrespectful of the public and have appalled our school community. The activities do not reflect Shore’s values or what the school stands for.”

“Shore has already communicated to parents in the strongest possible terms that boys are not to take part in the activities. Any boy who does participate risks losing their place at Shore.”