For the past three days, we’ve seen a city awash with hi-vis vests, riots and a heavy police presence across Melbourne’s CBD. Here’s what we know so far about the Melbourne protests.

Protests in Melbourne have seen a union building trashed, a journalist assaulted and hundreds of people marching on a freeway, bringing traffic to a standstill.

There’s been talk of Neo-Nazis and extremists, misinformation about the arrest of a livestreamer and viral footage of a rioter kicking a bystander’s dog.

It’s been an eventful three days. Here’s what we know so far.

How did this all start?

There’s been no shortage of wild scenes from the three-day protest but it all began with a modest gathering outside a union building on Monday.

A dozen-or-so construction workers turned up around 9am to protest outside the Construction, Forestry, Maritime, Mining and Energy Union offices in Melbourne.

A prominent livestreamer was on the scene interviewing the men, who said they were protesting against mandatory vaccines for construction workers. 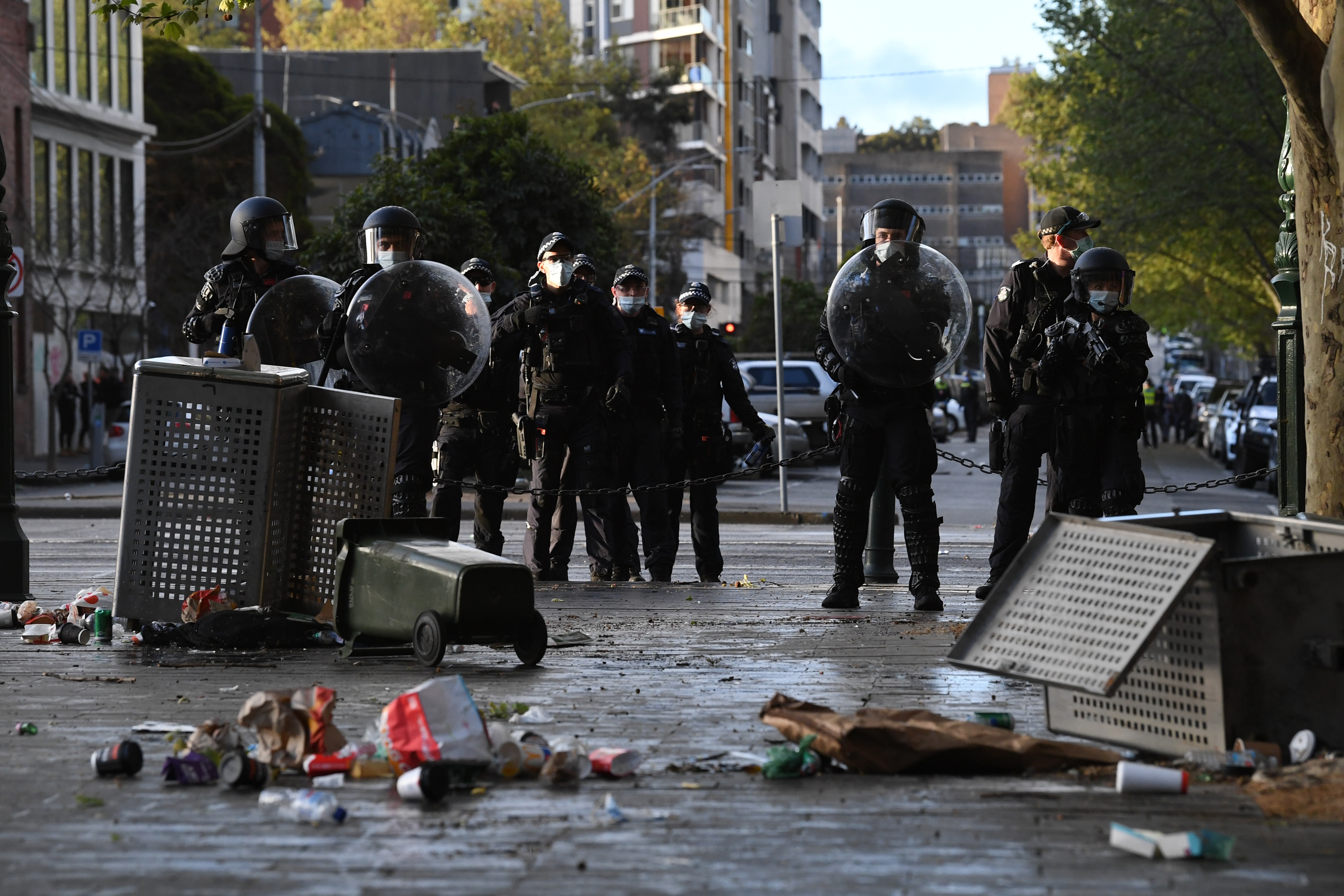 Police in riot gear are seen at a protest at Construction, Forestry, Maritime, Mining and Energy Union (CFMEU) headquarters in Melbourne, September 20, 2021.
AAP
By 10am, a Melbourne anti-lockdown group caught wind of the protest, promoting it in an encrypted chat. By midday, hundreds of people had rocked up, including well-known agitators and anti-lockdown “celebrities”.

By 6pm, the same anti-lockdown group had published a flyer in an encrypted chat promoting a protest for the next morning, telling people: "bring your friends and family in support. Wear work gear."

On Tuesday night, the anti-lockdown group was telling followers to hit the city at 10am “every day” until mandatory vaccines were scrapped for construction workers. CMFEU construction workers and far right activists are seen protesting on the West Gate Bridge in Melbourne on Tuesday.
AAP
As of Wednesday afternoon, thousands had flocked to the city despite a stern warning from police that they’d “deploy whatever tactics they need” to hold protesters “accountable.”

Police were seen firing tear gas to disperse protesters and questioning and arresting people on arrival. But protesters marched on, congregating at a war memorial in the city where they sang the national anthem and chanted “f--- Dan Andrews”.

After an hours-long standoff, the riot squad moved in on the war memorial, sending people scattering and bringing the seven-hour rally to an end.

What are the protests about?

Unions have been warning about pressure from the far-right, anti-vaxxers and the vaccine-hesitant for months.

In August, Sally McManus, secretary of the Australian Council of Trade Unions (ACTU), tweeted: “unions … are now facing what looks like an organised push by far-right groups & wanta (sic) be libertarian politicians to convince ppl not to get vaccinated.

“We will not tolerate such people dividing, confusing and playing with peoples lives and their jobs.”

At the start of September, the CFMEU put out a statement on its position. It said the jab was “the only way out of this pandemic” but it was “up to the individual” to decide. 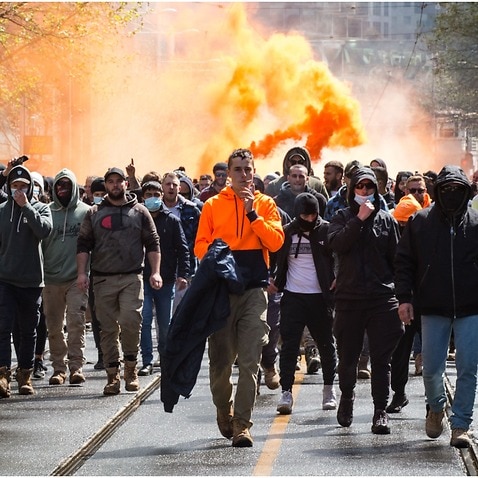 This position met backlash from a “loud majority” on a Facebook thread, according to The Age.

“You’s should be out in the street fighting against this tyranny not coercing members into the no jab, no job scenario,” one commenter wrote.

“When will we rally against mandatory vaccinations, all the boys are ready to go,” said another.

Anger grew as Victoria introduced mandatory vaccination requirements for those on building sites. The new rules meant workers had to have their first dose of a vaccine by this Thursday to get back to work.

Following Monday’s riots outside the CFMEU building, the government announced a two-week shut down of the construction industry, citing increasing transmission of COVID-19 on work sites. 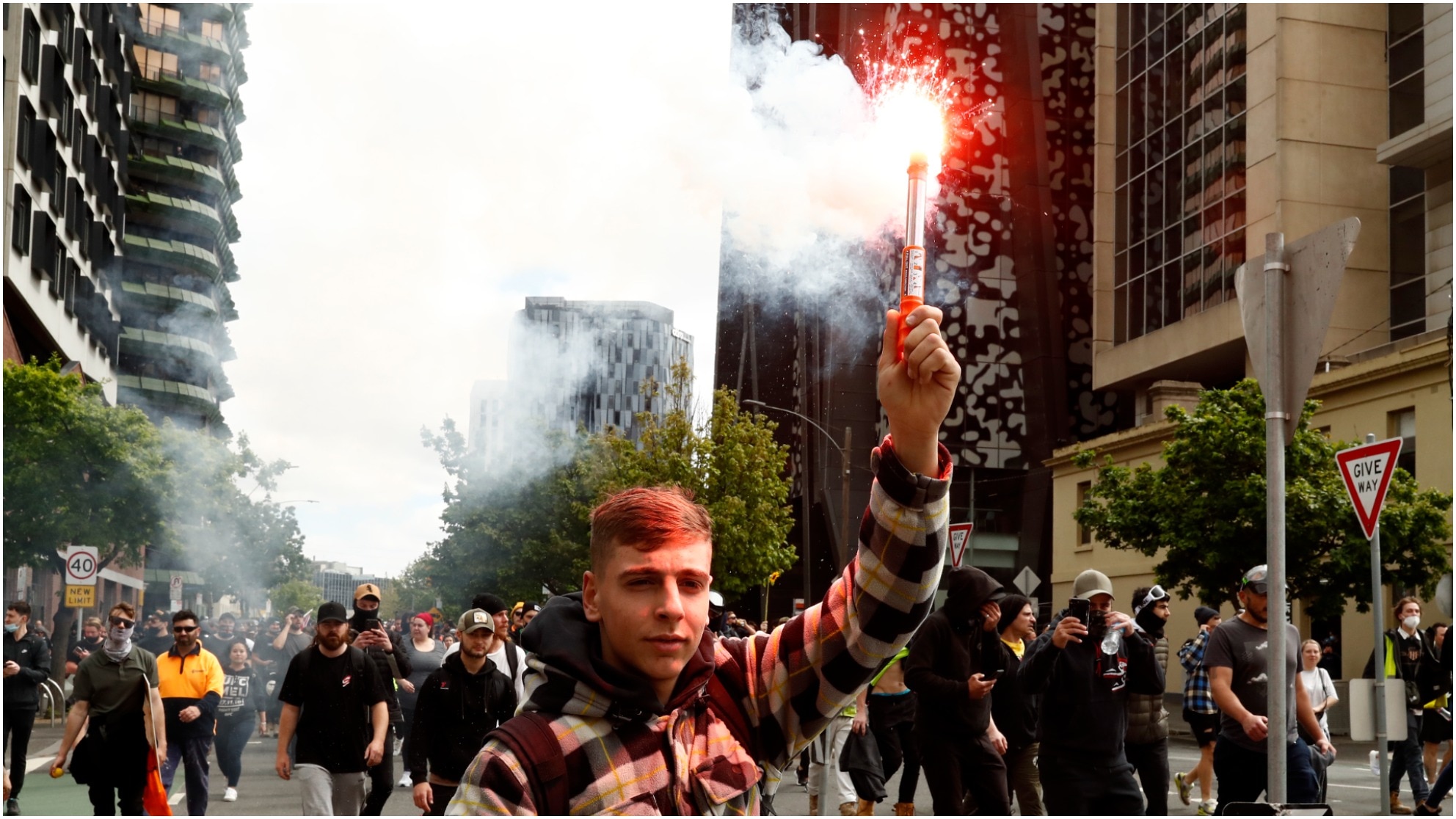 Melbourne is currently subject to COVID-19 lockdown restrictions, with people only permitted to leave home for essential reasons.
Getty

Who are these protesters?

Union officials and Labor politicians have come out swinging against the protesters, claiming the far-right and anti-lockdown protesters have infiltrated the rallies.

The CFMEU told The Feed on Monday, "we are not going to be intimidated by outside extremists attempting to intimidate the union, by spreading misinformation and lies about the union’s position."

The ACTU issued a statement condemning “the violent attack” that they claimed was “orchestrated by violent right-wing extremists and anti-vaccination activists.”

Premier Daniel Andrews said while some protesters were from the building industry there were others “who were not”, adding, “they’re not there to protest, they’re there for a fight.”

But others said the narrative that Neo-Nazis had swamped the protests has been overhyped. 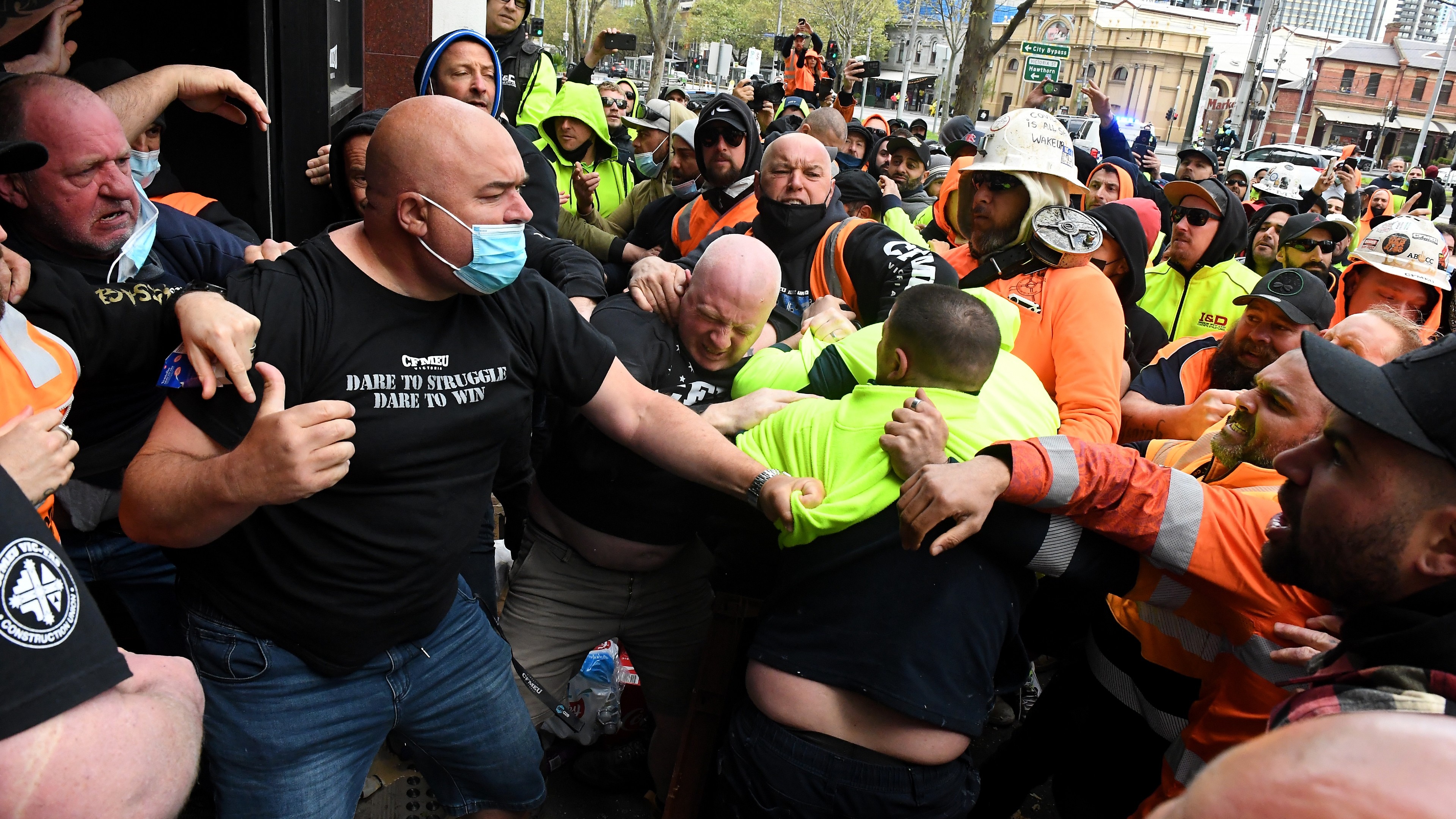 Construction workers clash with unionists at a protest at CFMEU headquarters in Melbourne.
AAP Image/James Ross
Several unnamed senior CFMEU sources told The Age that they recognised many of the people at Monday’s protest to be union delegates and members.

They estimated that about 80 to 90 per cent of the protesters were construction workers.

Experts also told The Feed that while anti-lockdown personalities and the far-right have co-opted the cause there isn’t strong evidence that they organised the protest.

How have the police responded?

Police have pulled out all stops to disrupt the protests including rubber bullets, pepper spray and tear gas.

Victoria Police were candid about the difficulties the some 500 officers faced in managing the mostly-male crowd of up to 2,000 protesters on Tuesday.

"Any police force would have been challenged by the spontaneity and the sheer mass of numbers we saw from this group, and the tactics they employed throughout the day," Commissioner Shane Patton said.

Police had arrested 62 people by Tuesday and Commissioner Patton said police would use "very different tactics" if required on Wednesday.

"Crowds like this are cowards, cowards who seek to hide their identity ... to do other things that if they were by themselves would not have the courage to do," Mr Patton said on Tuesday.

Police Minister Lisa Neville described the protesters as “thugs” who have sought to cause harm and injury.

“It’s a real slap in the face to the Victorian community who have been doing it very tough,” she said.

“We all want these restrictions to be over, and what we saw yesterday were people that were willing to put that at risk.

“We’ve got to work together, so we cannot see this sort of behaviour again.”

The Feed reached out to the CFMEU at 10am for comment. We’re still awaiting a response and will update this piece once it comes through.