A 47-year-old former kindergarten teacher, who fell victim to an elaborate internet love scam, has returned to Australia after her conviction was overturned.

An Australian woman wrongfully convicted of drug smuggling landed in Brisbane this morning after spending six years in a Cambodian prison.

Yoshe Ann Taylor, a mother of two from Queensland, was sentenced to 23-years in prison but she has been declared innocent by a Cambodian court.

In a hearing on Good Friday, the court agreed the former Queensland Kindergarten teacher was the victim of an elaborate Internet love scam, first revealed by a joint The Feed - Fairfax investigation in 2016.

Ms Taylor was duped by an international drug smuggling syndicate that preyed on lonely hearts.

She served almost a fifth of her sentence before new evidence was presented by her lawyers showing other Australians have fallen victim to the same scam.

The 47-year-old travelled to Phnom Penh in 2013, after engaging in an online romance with a man who went by the name Precious Max.

Claiming he was a successful South African businessman, Max offered not just charm, sex appeal and romance, but also a possible job in an arts and crafts business. On her second trip, Max asked Ms Taylor to carry back a package to give to a contact who supposedly ran the Sydney branch of the Khmer Arts and Crafts business.

She was convicted of drug smuggling after being caught trying to leave the Cambodian capital with 2kg of heroin concealed in her luggage.

Ms Taylor's prosecution was based on information provided to Cambodian authorities by the Australian Federal Police. 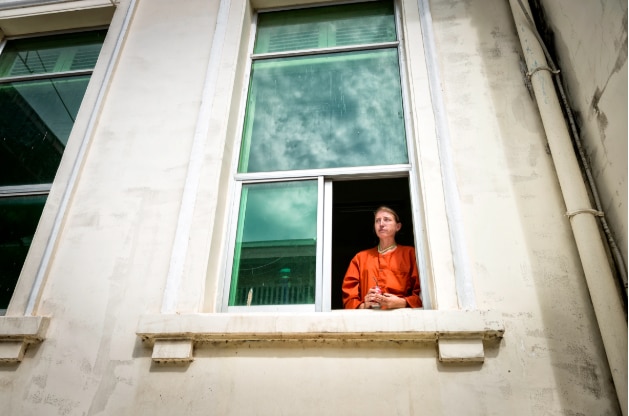 The AFP and Commonwealth prosecution authorities are aware of love scams operating in the region.

Melbourne-based solicitor, Alex Wilson, who is part of Taylor's legal team, greeted her at Brisbane airport this morning, on what will be her first day in Australia after a seven-year ordeal.

The Sydney Morning Herald reports that Ms Taylor's two children, who were nine and 14 when she was arrested, have not spoken to their mum since 2014.