Watch the full documentary, Sex in Japan: Dying for Company

It’s also the home of maid cafes and on a Sunday morning you can find young men hanging out, slouching against walls, waiting for them to open.

Inside, they’ll be fawned over and called ‘master’ by women dressed as cute, frilly (you guessed it) maids. The name of the restaurant is a reference to the "ideal Japanese female" - a lady of tradition, of feminine grace and domesticity.

The woman who runs it, Yuki Chizui, has a good sense of humour.

“I can’t help being a strong woman,” the 31-year-old tells The Feed as she slices into raw fish.

The restaurant is a big deal in a country where women’s hands are considered too warm to make sushi and their menstrual cycles are said to ruin a woman’s sense of smell.

Her ambition to break down barriers for women in the workplace is not popular with potential suitors.

“I can find men, but the problem is I speak out a lot … That somehow puts them off.”

Yuki says that hasn’t always been the case in Japan and the change has a lot to do with men facing job insecurity and falling wages.

“To keep their dignity, men want someone weaker than themselves, thin and frail, soft and feminine like the maid cafe girls.” 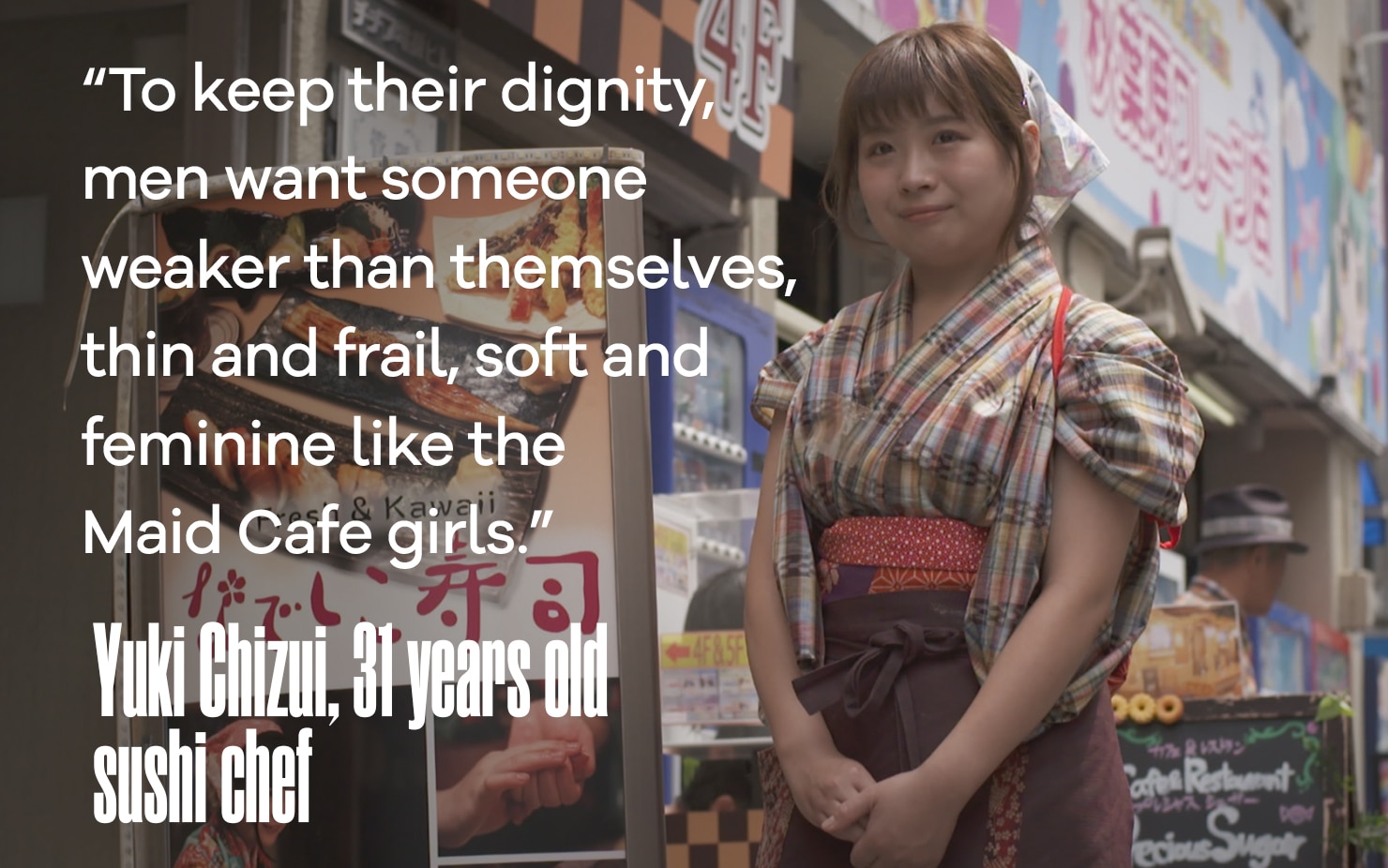 Yuki is among around 60 per cent of young women aged 18-34 in Japan who are single. For men that figure is 70 per cent.

The Government has a keen interest in the findings - Japan’s ageing population is shrinking.

In 2017, the number of births fell to its lowest since records began more than a century ago, resulting in the largest ever natural population decline of 403,000,  a sizeable amount in a country of127 million.

Japan’s Liberal Democratic Party MP Kato Kanji earlier this year commented that women should have multiple children, implying single women are a burden on the state.

But the reason so many are flying solo is not a generation turning its back on marriage and family: more than 85 per cent of men and women intend to marry.

So what’s stopping people from getting hitched? Twenty-six-year-old Taiyo Hashimoto says there are not enough hours in the day to date.

“I’m supposed to finish work at 7pm but I work overtime basically every day.”

Taiyo is what’s known in Japan as a ‘salaryman’, someone who works in an office.

He’s smart and dedicated to climbing the corporate ladder, which means putting the company first and often catching the last train home at midnight after drinking with his boss.

“I have to keep up with him, which is hard on me. He has a drink. So do I. He asks for another, so do I. That’s what you’re expected to do.”

Taiyo says another reason for Japan’s high rates of singleness could be Japan’s multibillion-dollar sex industry.

“Men go to brothels or massage parlours, fuelled by after-work drinks with their colleagues. That sort of thing is common. Actually, they brag ‘I met this type,’ or ‘mine was so hot,’ to each other. It’s all part of the fun.” At the top of a banal apartment block in Tokyo is a woman who has seen it all.

“There are lots of places for men to have fun. Men don’t have to bother having a girlfriend,” she explains.

Ai Aoyama’s clients are mostly in their twenties and thirties and lacking the confidence to talk to a ‘real woman’.

“Young people in today’s Japan are into a virtual world where they meet very pretty girls. A flesh and blood girl is scary, she might disobey you.”

Back then, her clients were overworked and stressed out salarymen who enjoyed being her slave.

“With me binding and whipping them, the men were healed of their worries from the outside world, like troubles at work,” she says.

“Really, if this continues, problems like declining birth rates will get worse”.

Ai’s solution to the problem is to “to adopt polygamy”.

“It involves one excellent man and allows a number of women to bear his children,” she said.

Social and cultural norms aside, that man may have a hard time supporting all those children. Money, finding a house, and increasingly, work, top the reasons both men and women give as obstacles to marriage.

For men, just how soon they want to get married directly relates to their employment.

Full-time employees are keener to tie the knot than those in temporary or part-time employment.

But for both men and women aged between18-34, full-time work is on the decline.

More the half of young people in Japan are temporary workers, according to Makoto Iwahashi, who works for labor NGO, POSSE.

Makoto says the culture of overwork has existed for decades - extra hours once meant permanent work, promotions and high salaries - but these days, that’s not the case.

“There’s no prospect of young people having kids or having a family because their salaries are not going to go up,” he says.

“They don’t know what they are going to be doing a month from now. Working conditions have completely changed.”

Calls to POSSE’s worker’s hotline have increased from a few hundred in 2006 to around 5,000 this year.

Makoto says the complaints are mostly about so-called ‘black companies’ that treat workers as disposable.

The other issue they receive calls on is overwork and in Japan it’s deadly. It took eight months for Matsuri Takahashi to go from a bright young woman who’d gained a coveted position at advertising giant Dentsu to a shadow of herself, surviving on just ten hours sleep a week.

On Christmas Day 2015, the 24-year-old took her own life at a company dormitory.

She left her mother a note:

“Thank you, Mum, for everything you’ve done for me.

“Everything about my life and work is hard.

Matsuri had worked more than 100 hours per month overtime in the lead up to her death.

Her mother Yukimi Takahashi still lives in the small house where her daughter grew up. Matsuri’s bedroom is filled with her childhood things, old photographs and lots of pink and sparkles.

Mrs Takahashi says the grief is so all-consuming she still finds it “hard to breathe”. The reason she continues to talk about Matsuri’s death is because she wants the world to know what effect Japan’s working culture is having on young people.

“The Japanese working environment claimed my daughter’s life and continues to claim the lives of other women like her. I want people to know that.”

Dentsu was fined ¥500,000 - approximately AU$6,000- and the company president stepped down, but no one was prosecuted.

Makoto Iwahashi says a harsher penalty is unlikely to have made any difference.

“This is not just a Dentsu problem, this is a problem which is happening in every single workplace”.

Matsuri’s suicide re-focused the government’s attention on karoshi and in July this year it brought in new laws it says will improve the country’s work-life balance.

The legislation includes equal pay for equal work regardless of employment status and caps overtime at 100 hours extra a month, though some white-collar workers earning over a certain amount are exempt. But as Makoto points out, that’s twenty hours more than the government’s own definition of what puts a worker at risk of karoshi.

“It’s ridiculous. There is no law the company has to follow on keeping the actual number of hours that a worker works, so they can just forge timesheets,” he says.

Makoto doesn’t believes the government is committed to real change

“There are a lot of companies and business agencies donating huge amount of money to the government and to the ruling party.” Some young people in Japan are already trying to change things themselves; joining start-ups, freelancing or choosing jobs with more flexible hours.

Sushi chef Yuki Chizui for example has created a flexible workplace for her staff and makes sure she takes time out for herself - time she says can be spent with her significant other when she finds him.

But so long as a culture of overwork and uncertain employment exists many of Japan’s millennials may continue to struggle to find love.

As 26-year-old Taiyo Hashimoto says, “to put it simply, the longer we work, the less time we have to ourselves.”