The job ads claim applicants need little more than a bicycle, a phone and a work permit. But some of those signing up as food delivery cyclists may also need a better grasp of Australia’s road rules.

Footage obtained exclusively by SBS News reveals the hair-raising routes being taken by delivery cyclists in Sydney who are seemingly unaware that they are banned from travelling through the city’s motorway tunnels – where speeds can reach 80km/h.

International students signing up for delivery jobs are particularly at risk, critics say, as their lack of experience on the country’s roads is not being offset by sufficient training from the companies that engage them. 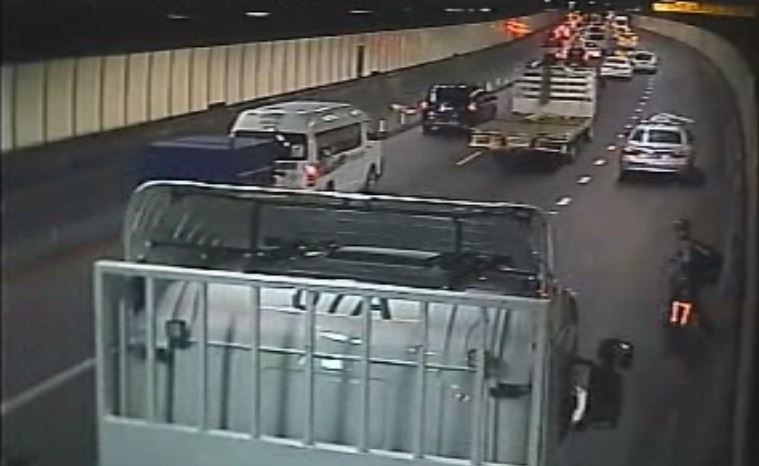 It’s a problem that is growing along with the rising popularity of food delivery services such as Foodora, UberEATS and Deliveroo.

“The rise of home delivery via bicycles has really caused a lot of this increase over the last few months, but we’re definitely seeing it on a weekly basis,” Ms Cooney told SBS News. 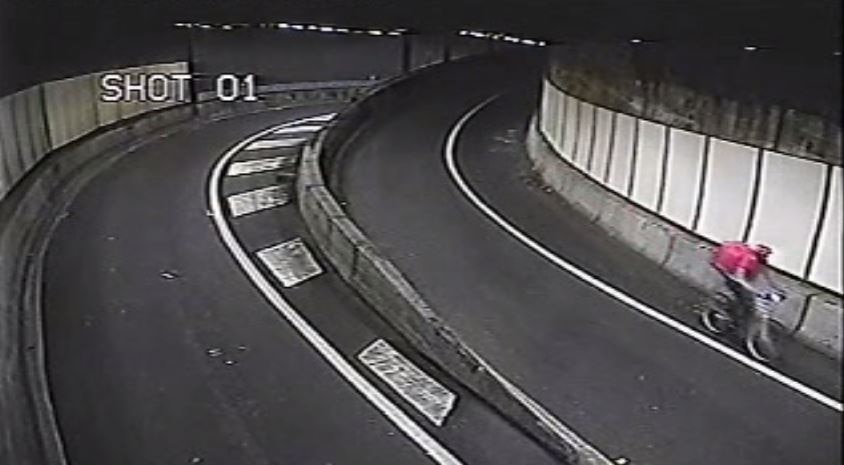 There is no dedicated cycling lane in the tunnel.
Supplied

In one recent instance captured on CCTV, a rider is forced to dismount - only to be lapped by another food delivery cyclist - while negotiating his way through Sydney’s Eastern Distributor, a tunnel with an 80km/h speed limit and no dedicated cycle lane.

Three days later, the busy evening traffic is forced to swerve to avoid a Foodora delivery cyclist using the same route. In yet another example that same fortnight, a stranded food courier appears to try hail down a passing ute before being before rescued by police.

“Your life’s in jeopardy when you do enter a tunnel,” said Ms Cooney, who urged cyclists to check their routes before setting off on a delivery.

“You may not be familiar with Sydney’s streets, you may think that you're entering a safe situation but tunnels are an absolute no-go zone for cyclists.” 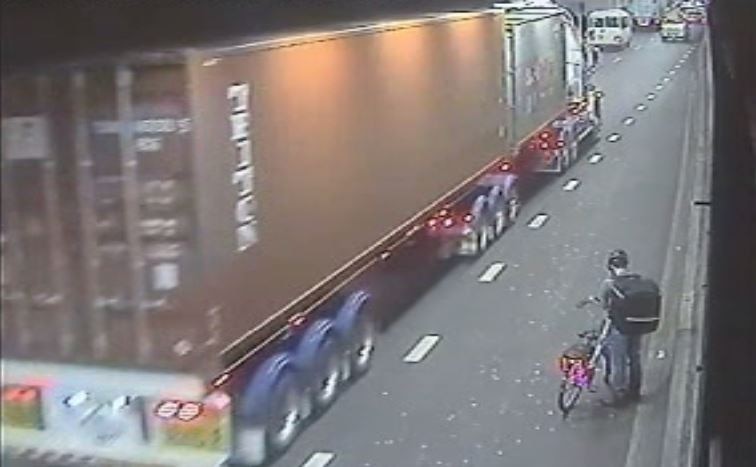 University of Sydney employment relations academic Alex Veen, who is co-authoring a national study into the food delivery sector, found a “considerable” proportion of bike couriers surveyed came from overseas.

“We conducted a little over 50 interviews [with cyclists] and we found that at least 46 of them were either international students or working holiday makers who were in here in Australia for a short period of time doing this type of work as an opportunity to make some money,” Dr Veen said.

Attracted by the job’s low barriers for entry, the international students or working holiday visa holders surveyed also had a “higher risk profile” in terms of road safety due to their inexperience on Australian roads, he said.

“It wouldn’t surprise me that it does happen occasionally that riders end up in these sort of circumstances [in tunnels and freeways] because of a lack of familiarity with the rules and the roads here in Australia,” he said. 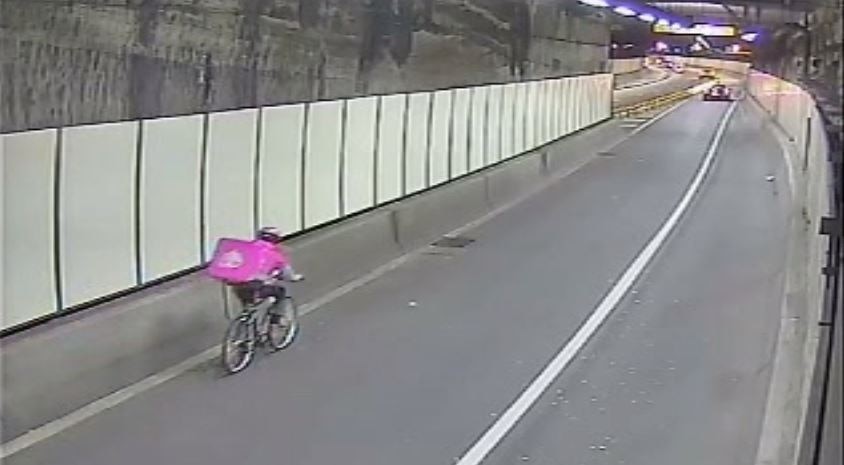 A cyclist in the tunnel where speeds can reach 80km/h.
Supplied

Mohammed, an UberEATS cyclist and student from India who spoke to SBS News between dinner deliveries in the Sydney suburb of Surry Hills, said he took care to follow the road rules - but other cyclists didn't.

“Some students, they don’t follow the rules and they go on wrong way and they will be in very much [danger] for their lives,” he said.

“I have seen many incidents happening.”

Learning 'on the job'

Dr Veen said that the training given to food delivery cyclists varied from platform to platform, with some given only a short induction before being left to “learn on the job” using navigation apps that had the potential to lead them onto dangerous roads.

“Further opportunities for training before they get onto the roads might be one way to raise the safety of these particular riders,” he said, adding that many surveyed did ignore the directions given by navigation apps if they'd learned from experience there were safer routes. A cyclist signals to a passing ute.
Supplied

When asked by SBS News, Transport Workers Union national secretary Tony Sheldon was scathing of the levels of training and support currently provided to student or working visa holders in the food delivery industry, who he described as among the most vulnerable in the community.

“We’re seeing no or little explanation of road rules, very little in the way of inductions … whilst we’ve got courier companies such as Toll in the courier parcel industry that spend three days inducting new employees in bicycle courier work,” Mr Sheldon said.

He said the union was now gathering evidence for cases against “exploitative” food delivery companies, which he claimed paid contracted cyclists as much as 50 to 80 per cent below the national award rate.

Foodora advises prospective riders in Melbourne they will earn “up to” $8 per order; Deliveroo reports that cyclists earn $9 to $10 per order. By contrast, the minimum casual award rate for bike couriers is $24.21 an hour, or $43.58 an hour on Sundays.

“We’ve seen example after example where injuries are occurring, where people are being put into danger and life-threatening situations because these companies want to make a buck,” Mr Sheldon said.

The rise of the gig economy - characterised by flexible hours and short-term contracts - is part of a growing shift away from permanent work. As a result, workers often have no rights to traditional entitlements like holiday pay, sick leave and superannuation.

According to the Reserve Bank, Australia has one of the highest shares of part-time employment across OECD countries. 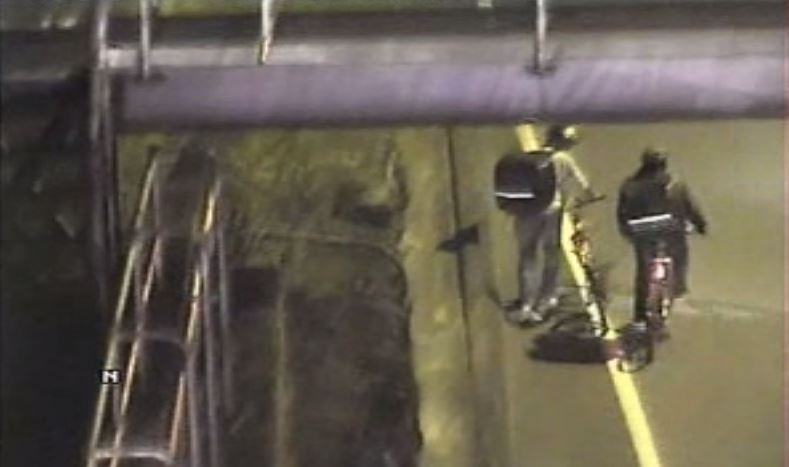 Two food delivery couriers are seen in Sydney's tunnel system, where it is illegal to cycle.
Supplied

Each of the three main food delivery operators in Australia pointed to the flexibility the job offered cyclists, and defended their policies regarding the safety.

A Deliveroo spokeswoman said cyclist safety and education was “paramount”, and its app had been designed to ensure cyclists did not get taken down the wrong roads.

“Before a rider commences, they undertake an on-boarding session which includes road rules, but also tips on a variety of other factors like different weather conditions,” she said.

UberEATS said the safety of its couriers and other road users was a “top priority”, noting its app took into account road rules including motorways and tunnels where bikes were banned.

“We provide cycling safety tips from expert government agencies during the sign-up process and within the delivery partner app,” a spokesman said. 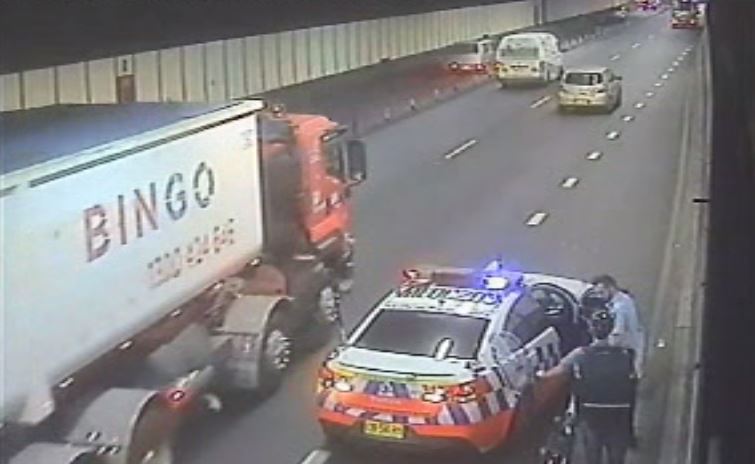 A police officer with a food delivery cyclist in the tunnel.
Supplied

A Foodora spokeswoman said it required all contractors to follow a safe riding policy and pass a “work safe competency test, which among other things addresses road safety”.

Asked about the footage of one of its cyclists using the Eastern Distributor, the Foodora spokeswoman said the company had an “ongoing dialogue” with government agencies “to ensure the safe and legal conduct of contractors”. 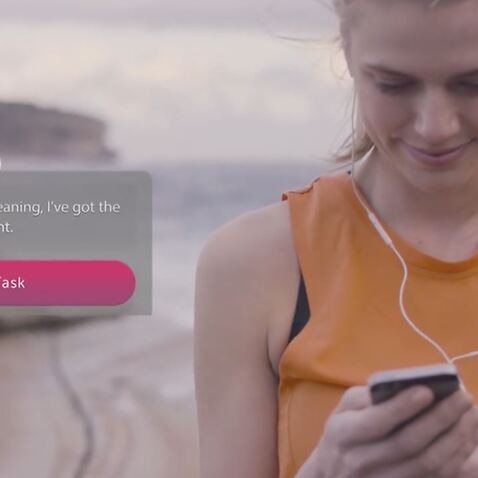