How did protests against fuel tax hikes turn into a "rebellion" against President Emmanuel Macron in France?

They began as demonstrations against fuel tax hikes, but the French government's decision to scrap the planned rise has done little to quell the "yellow vest" demonstrations.

Thousands of protesters gathered in Paris on Saturday chanting "Macron resign" and "president of the rich".

So how did the crisis balloon into a mass movement against the embattled 40-year-old president and his perceived pro-rich policies? 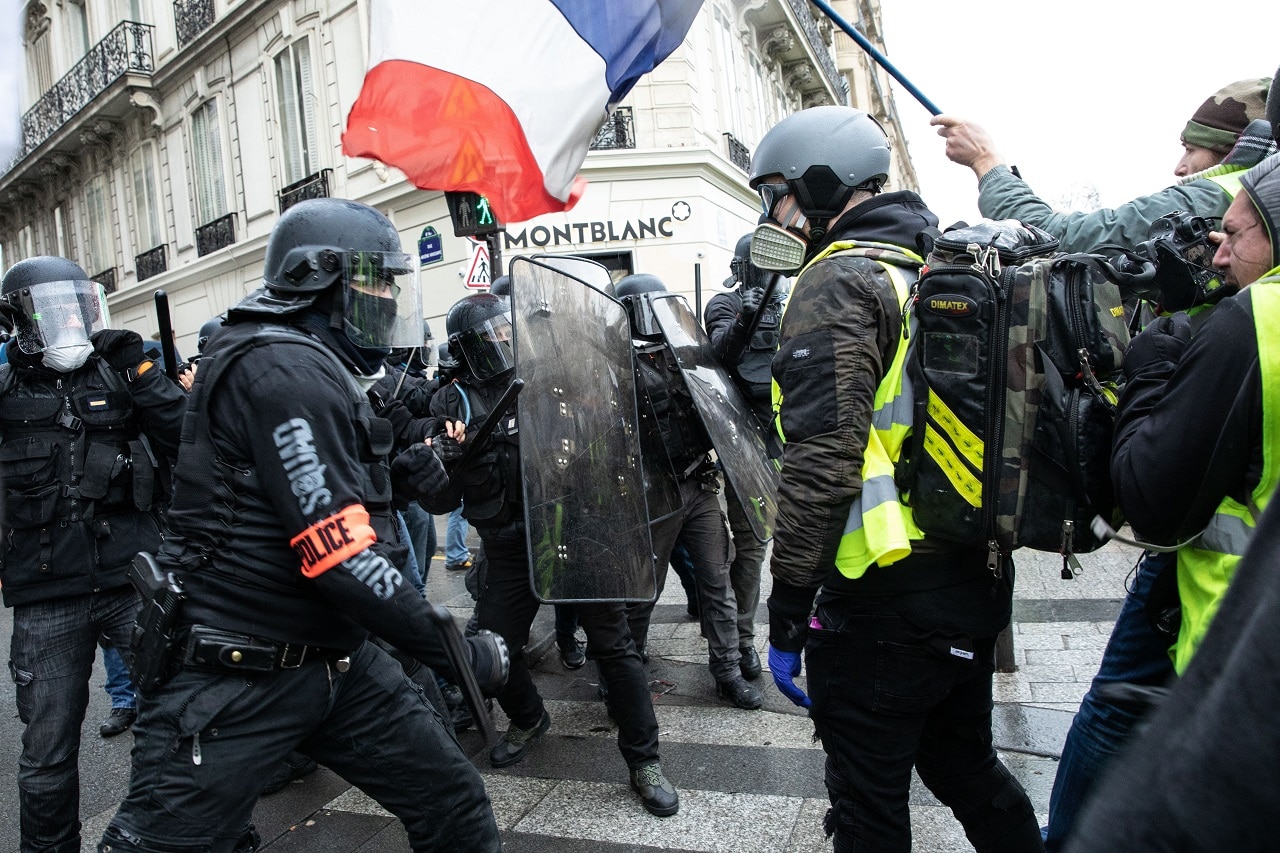 The withdrawal of French President Emmanuel Macron from implementing the Polluting Fuels tax, had very little to no effect on calming the tense situation.
AAP

Who are the yellow vests?

The "yellow vests", clad in the luminous safety jackets carried by law in all French cars, began staging nationwide roadblocks on November 17 in protest against tax hikes raising the price of fuel.

On Saturday, anti-government protesters wreaked havoc around the country for the fourth weekend in a row, hurling missiles, torching cars and vandalising shops and restaurants. "It is clear that we underestimated people's need to make themselves heard," government spokesman Benjamin Griveaux told Europe 1 radio.

"It is anger that is difficult to understand from an office in Paris," he acknowledged.

According to French media, the protesters are becoming increasingly diverse, with students, small business owners and pensioners all taking part. Why are the protesters so angry?

French affairs expert Jean Bogais was not surprised the government's last-minute cancellation of the planned rise in taxes on petrol and diesel had failed to defuse the situation.

Mr Bogais, an Associate Professor at the University of Sydney, told SBS News on Monday the protests had become a "rebellion" against Mr Macron.

Mr Bogais said over the past 18 months, Mr Macron had tried to "change the way of life that exists in France ... To change the structure of the social system, how business is done [and] this has negatively affected the most disadvantaged people". A vehicle is set on fire as protesters take part in the 'yellow vests' demonstration in Paris.
Getty

Mr Bogais said one of the president's most controversial policies was slashing France's wealth tax.

"His argument was that France needed the rich to make more money to invest in the economy, to invest in startups and this would help everybody. But that has not worked."

He said "growing dissatisfaction in the government" meant violence was "inevitable".

"There has been a profound fracture within French society. The government has lost control.

"We haven't seen tanks in the centre of Paris since the World War Two," he said, referring to the government crackdown on protests. Protesters in Toulouse on Saturday.
Getty

The crisis facing a leader who had been hailed internationally as a youthful defender of liberal values is being closely watched abroad.

Spain's El Pais newspaper said it was the first time Macron was "hesitating, giving the impression that he does not know what to do". 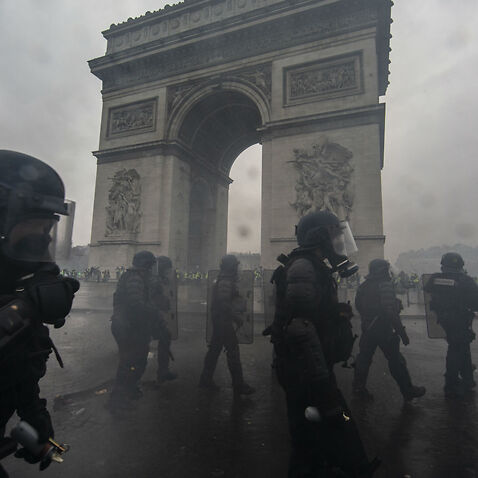 He has already offered protesters a string of concessions, after vowing not to be swayed like his predecessors by mass demonstrations.

But so far he has refused to back down on a policy hated by the "yellow vests": his decision to scrap a tax on the assets of France's wealthiest. 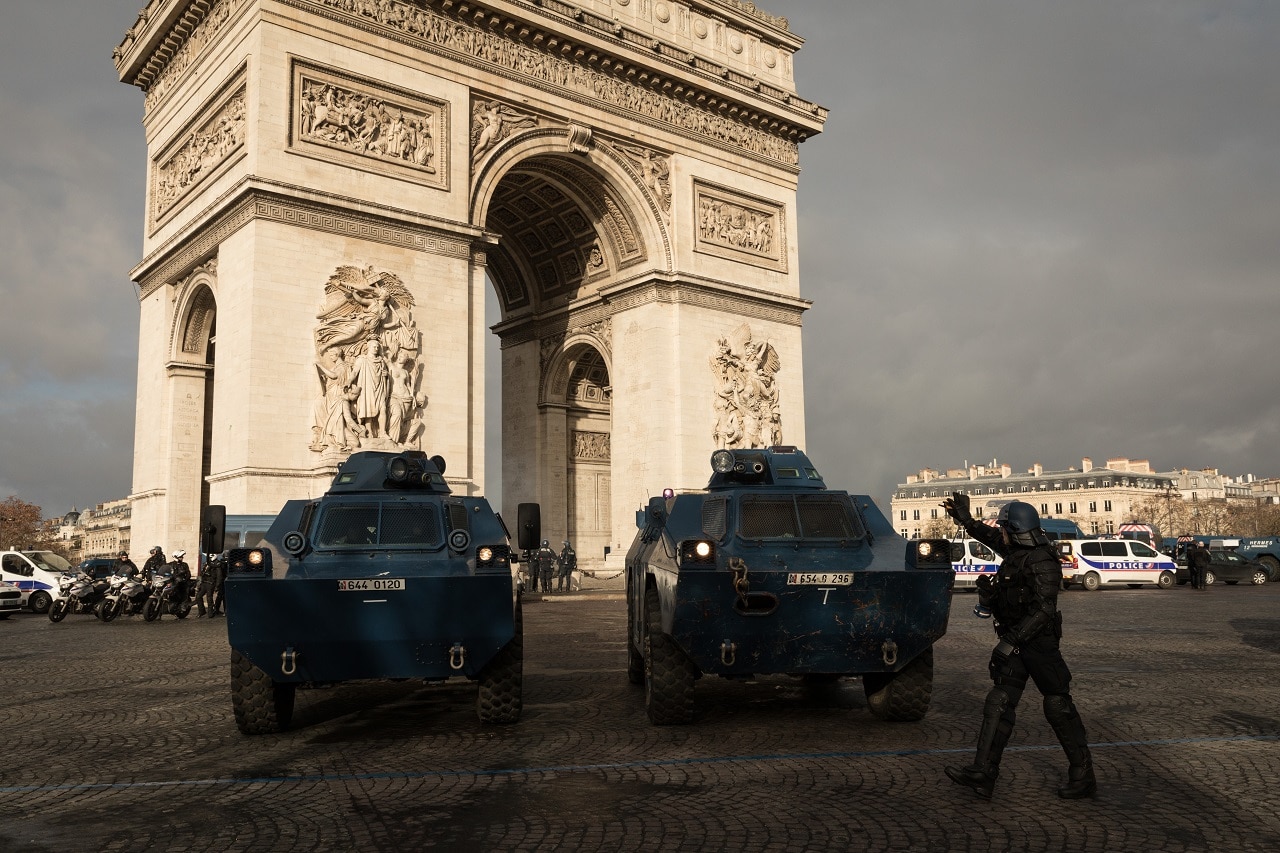 Police tanks on the streets of Paris.
Getty

Labour Minister Muriel Penicaud on Sunday also rejected the idea of a hike in the minimum wage, saying it would have knock-on effects for the whole economy.

"If we raise all salaries automatically, many businesses would just go bust - or they would have to raise their prices, and no one would pay for their services."

Mr Macron will meet trade unionists and business leaders on Monday to discuss the crisis.

He will then address the nation on Monday night, in what will be his first public comments on the demonstrations.

Ms Penicaud said the president will announce "immediate and concrete measures" to respond to the crisis.

The movement has spread beyond France's borders, with around 400 arrested at a "yellow vest" event in Brussels on Saturday and peaceful demonstrations taking place in Dutch towns.

In France, authorities have also launched an investigation into social media activity from accounts allegedly drumming up support for the protests, according to AFP. And according to Britain's Times newspaper, hundreds of online accounts linked to Russia were used to stoke the demonstrations.

Citing analysis by New Knowledge, a cybersecurity company, the Times said the accounts spread disinformation and used pictures of injured protesters from other events to enhance a narrative of brutality by French authorities.