Younger athletes are more likely to back the right of competitors to express themselves at Olympic events, the survey found.

A new survey of Australian Olympic athletes has found a majority are opposed to protests during events or on the podium.

The Australian Olympic Committee Athlete’s Commission, led by pole vault gold medallist Steve Hooker, has been consulting with athletes after the International Olympic Committee announced it was seeking feedback on the Olympic Charter's controversial Rule 50, which bans political statements and demonstrations at Olympic venues.

The survey of 496 past and present Australian Olympic athletes found more than 80 per cent of respondents opposed protests of any form on the field of play, arguing they detract from the spectacle, performances and experiences of other athletes.

Forty-one per cent felt the Games were not the place for athletes to express their views, while 40 per cent backed self-expression under some circumstances. But views were different among younger athletes, particularly those who made their Olympic debuts in the past decade.

Thirty-four per cent of respondents that debuted during the 2010s backed the right of competitors to express themselves at the Games.

Three out of ten athletes interviewed said they would consider taking part in an on-field protest, despite knowing there were consequences for breaching Rule 50. “While just over 40 per cent of athletes more broadly felt there was no place for self-expression or protest at the Games, if you look at athletes from the 2010’s, that figure of those against falls away to just 19 per cent,” Hooker said.

“Nevertheless, the majority of that younger group felt opportunities in social media and media conferences were preferable to protest on the field of play or Olympic podium.”

The results of the survey and a series of recommendations have been forwarded to the IOC’s Athletics Commission.

Rule 50 of the Olympic Charter states “no kind of demonstration or political, religious or racial propaganda is permitted in Olympic sites, venues or other areas".

A new set of guidelines released in January ahead of the now-postponed Tokyo Games prohibited the wearing of political armbands, kneeling or making political hand gestures.

The IOC has said sport should remain neutral and the focus of the field of play should be centred on the performance of athletes.

That stance has come under increased criticism in the wake of the resurgent Black Lives Matter movement, with athletes across the world from various sports in recent months taking part in on-field protests to raise awareness of racism. 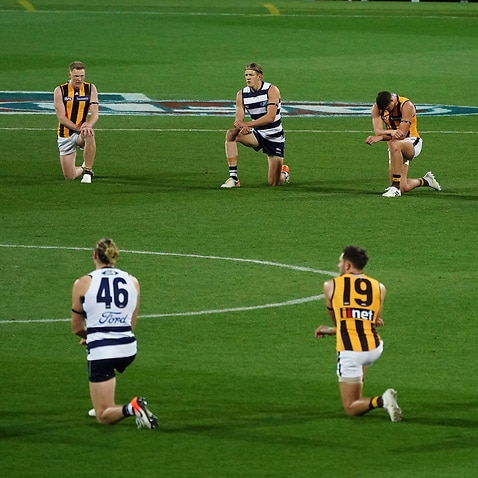 As calls for social justice reverberate around the world, sport and politics are more entwined than ever

One of the most famous instances of political statements at the Olympics came at the 1968 Mexico City Games.

African-American runners John Carlos and Tommie Smith raised their fists in a black power salute after receiving their gold and bronze medals in the 200m sprint.

They were joined on the podium and supported by Australian athlete Peter Norman, who won the silver medal.