EXCLUSIVE: Venues in one of Sydney’s migrant hotspots boast of the millions in pokie winnings they share with their local communities. But an SBS News investigation reveals the generosity begins closer to home.

Millions made by pokie clubs in or near Sydney’s most disadvantaged areas have been used to bankroll lucrative executive salaries and overseas staff travel, in one case eclipsing the cash spent on the industry’s much-touted community donations.

Western Sydney’s Fairfield RSL Memorial Club spent $793,336 on community donations and other financial support in 2014, when it collected more than $40 million in pre-tax poker machine profit - or player losses - in the year to August.

But an SBS News investigation into some of the region’s biggest clubs found Fairfield RSL was equally generous to its most senior executive, whose total remuneration in 2014 was worth between $790,000 and $799,999.

The club spending revelations come amid mounting concern about the impact of poker machines on vulnerable migrant communities in Sydney’s west, which has absorbed thousands of recent refugees from war torn Syria and Iraq.

Some of those who have lost big on the pokies shared their stories with SBS News.

"That’s probably my biggest regret," said Thang Ngo, a former Fairfield councillor and Vietnamese refugee who said poker machines had only tightened their hold since the end of the heroin epidemic that earned 1990s' Cabramatta its mantle as the "drug capital of Australia".

"We won the war on drugs but we couldn’t wean away the dependence on pokies in our area."

Losing out in the Lucky Country

The Fairfield local government area, where an extraordinary $8.4 billion was put through poker machines last year, has the state’s highest average net profit per machine at $280,732.

It also ranks as Sydney's most disadvantaged area, according to the Australian Bureau of Statistics, with an unemployment rate almost double the national average. More than half of the local population was born overseas, and more than 70 per cent speak a language other than English at home.

A report by the Australian Gambling Research Centre found that those from culturally and linguistically diverse backgrounds were more likely than the general population to develop problems if they gambled.

Migration stressors, when combined with increased access to gambling, placed them "at additional risk of developing problems," it said.

Heshmat Shaheed, a gambling and financial counsellor with the Arab Council of Australia, said it had almost 200 clients currently on its books, mostly due to problem gambling.

He said pokies were too readily accessible in western Sydney "because everywhere there’s a club".

Mr Heshmat advises new arrivals, including refugees, to resist invitations to head to the clubs to "try your luck," but some go anyway - and get hooked, he said.

"When they came to Australia, they can’t speak the language, they can’t find the work," he said.

"They feeling bored, staying home and doing nothing, especially if someone used to work all his life in his country and come here find himself do nothing," he said.

"Only sometimes go [out] for English classes, after that go home, what is he going to do?”

The not-for-profit clubs’ sector commonly cites its community donations and grants when deflecting criticism about the huge profits and associated harms of poker machines.

A significant portion of contributions are made through the ClubGRANTS scheme, which allows NSW registered clubs to claim a 1.85 per cent tax rebate on their poker machine profits above $1 million if they spend the equivalent amount on community projects.

But this generosity in and around Fairfield is set in broader context next to other financial details contained in the disclosures that clubs are required by law to make to members, obtained by SBS News. Over 3,000 refugees were resettled in Fairfield in 2016.
Fairfield City Council

For the past three available reporting periods, Fairfield RSL spent about three times as much on the total salaries of its top staff than the cash spent on community donations, its sub-clubs and other financial support in the same approximate 12-month period.

A further $148,519 was spent on staff "educational tours" to Bali, Singapore and Las Vegas.

In the same period, Fairfield paid out $742,285 in community donations and other financial support. The club made more than $40 million in pre-tax pokie profits in the 12 months to August 2016.

Fairfield’s chief executive Anthony Sobb said donations did not capture all that the club did for the community.

"What possibly isn’t reflected in this figure is the cost of running initiatives such as the Club’s Social Justice Committee, which conducts charitable fundraising, visits to Matthew Talbot Hostel, visits to nursing homes, clothing appeals and various other drives to the community,” he said.

Mr Sobb also defended the club’s executive compensation as appropriate given the jobs’ corporate expectations and responsibilities, and said the benefits gained from the club’s overseas trips far outweighed the cost.

We won the war on drugs but we couldn’t wean away the dependence on pokies in our area.

"The creation and evolution of [club-supported] Oakdene House Rehabilitation Centre is a direct result of annually attending clinician meetings and patient rehab programs at the Las Vegas Problem Gambling Centre," he said.

Nearby Cabra-Vale Diggers made more than $75 million in pre-tax pokie profit, according to its disclosures for 2016-17, when international travel costs came in at a relatively modest $24,600.

This was against more than $1.2 million in community donations, according its annual report for the year to June, or $1.6 million in ClubGRANTS disclosures covering the year to August 2017.

The club, whose chief executive was not available for comment, has elsewhere highlighted its support for refugees, including learn-to-drive programs and work experience.

"Over the past 12 months the district has experienced growth with refugees coming to the area," its 2017 president’s report said.

"This has and will continue to place increased demands on our community and the club is contributing in many ways to support these new arrivals."

Other areas in the money

In the neighbouring Cumberland local government area - home to the migrant "gateway" suburb of Auburn - Dooleys Lidcombe Catholic Club raked in almost $82 million in pre-tax pokie profits in the year to August 2017.

It was the third most profitable pokie club in the state.

Its annual report boasted $3.65 million in community donations, sponsorship and in-kind support, overtaking the $2.28 million to $2.37 million salary bill for its nine executives, including between $660,000 to $670,000 for its top earner. A further $1.77 million was spent on external advice.

But the club’s consultant spend blew out to more than $4.75 million the year prior, thanks to redevelopment projects, exceeding the $3.407 million spent on ClubGRANTS, donations and other community support. Its poker machine profit in the year to August 2016 was more than $83 million. 'It was like they were calling me': Addicts tell of the costly lure of pokies

Overseas travel for Dooleys staff also totalled more than $300,000 across the past three years, including trips to Singapore, Macau, Hong Kong and training courses at the Walt Disney Company’s Disney Institute in Florida.

In a statement, Dooleys said governance processes and expenditure relating to staff travel was "in line with standards that you would see at most Australian companies."

Its visits to Asian cities constituted research for its redevelopment plans as well as "procurement saving opportunities," it said, while the Disney Institute was a “world leader in customer service training."

"Additionally, salaries are commensurate with market rates," the club said.

At Bankstown Sports Club, the top earner collected a total remuneration package of between $620,000 to $630,000 last financial year. The club’s total spend on five executives was between $1.62 million and $1.67 million.

Bankstown Sports Club gave more than $3 million cash, in-kind and other support to community and sporting groups in the same period, according to its annual report. In the year to August, the club’s pre-tax poking takings were more than $84 million.

Its chief executive Mark Condi said the club’s executive pay was not excessive “when compared to other organisations of our size and complexity". 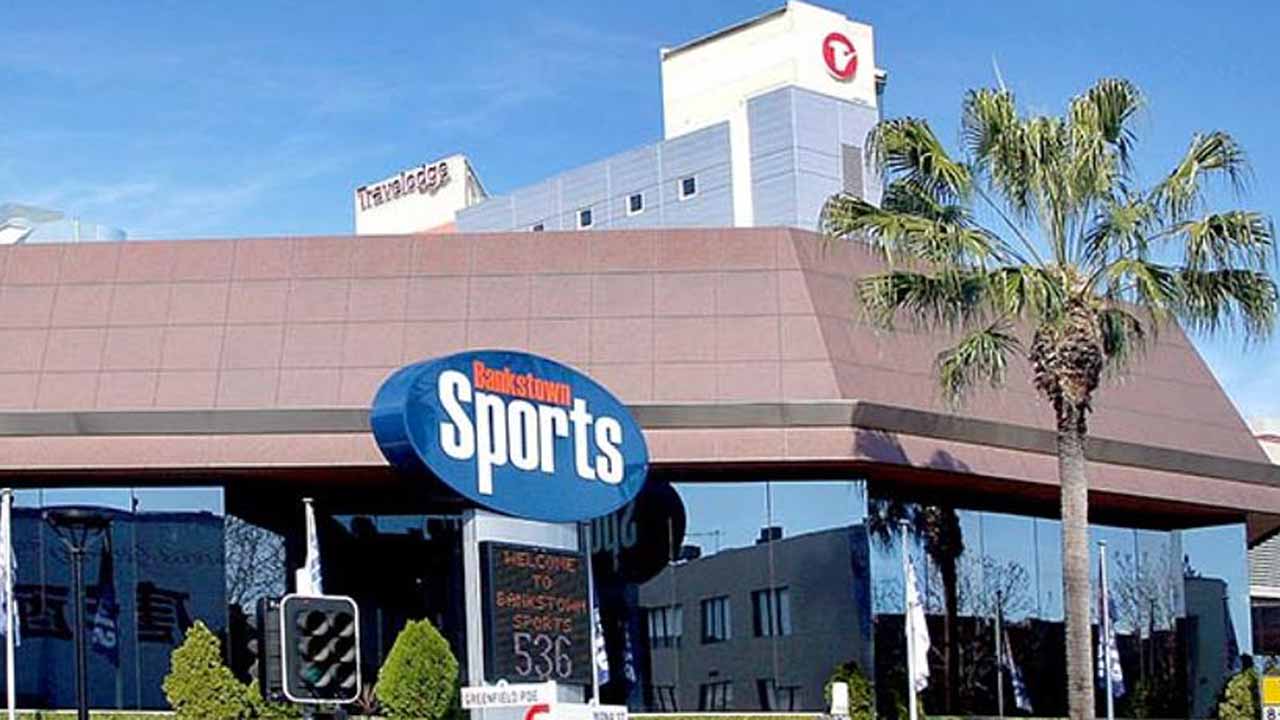 At Bankstown Sports Club, the top earner collected a total remuneration package of between $620,000 to $630,000 last financial year.
www.bankstownsports.com

"We must get this balance right between ensuring we have the very best talent working for our organisation while ensuring we never lose sight of being a not-for-profit, and an integral part of our community,” he said.

All money generated by the club goes back to the community in some way, he added, including $26.3 million on wages for 650 staff.

Counting the cost of Clubland

Mr Ngo said pokie clubs in western Sydney were now the centre of their communities, which he believes risked normalising gambling for a whole new generation.

For clubs like Mounties, NSW’s most profitable pokies club headquartered in the Fairfield local government area, community contributions ensured that 'in a lot of ways they own this community," he said.

"The gatekeeper literally is the club," said Mr Ngo, standing outside the council’s Mount Pritchard Oval, which is managed and maintained by Mounties. A sign directs those seeking public access to contact the club for bookings.

"Fairfield City Council might own it on the deed but Mounties actually controls who uses this oval," Mr Ngo said. "So as far as I’m concerned that ownership. Ownership is when you have control".

The gatekeeper literally is the club.

Mounties made $5.775 million in community contributions from profits derived from $103 million in gaming revenue last year, including $459,519 which was spent maintaining local sporting fields.

The club, which variously claims this community support comprises almost 64 per cent, 67 per cent or 174 per cent of its profits, did not disclose executive salary bands, overseas travel details or how much it spent on consultants.

The club also rejected the membership of an SBS News journalist seeking this information. Mounties chief executive, Greg Pickering, said the board was not required to provide any reason for doing so.

"Mounties is proud of its commitment to the community and approaches its governance responsibilities in a professional and respectful manner," Mr Pickering said.