Anti-maskers have been slammed for trying to make legal arguments during confrontations with businesses and police.

As Melbourne anti-maskers continue filming themselves arguing against Victoria's coronavirus rules, striking similarities have emerged in the claims they make.

Many have used a variety of "pseudo-legal" arguments that are circulating on conspiracy theory websites and social media pages.

SBS News looks at some of these.

'It hasn't been passed as a law'

Since 23 July, residents of metropolitan Melbourne and the Mitchell Shire must wear a face covering when leaving home, with a limited number of exceptions. But in one set of false online "guidelines" seen by SBS News, anti-maskers claim "mandatory masks is not a law".

"It hasn't been passed as a law ... [There has not been] three readings in parliament to enact it as a law," it says.

Associate Professor Luke Beck from the Faculty of Law at Monash University said this was one of many "pseudo-legal arguments" that is just plain wrong.

"It absolutely is the law - the Public Health and Wellbeing Act was passed by parliament ... that legislation allows the relevant government health officer to impose restrictions, like we have now," he said.

"The legislation goes on to say that when a person contravenes the directions, that person is liable to a fine and so that's what's happening here." 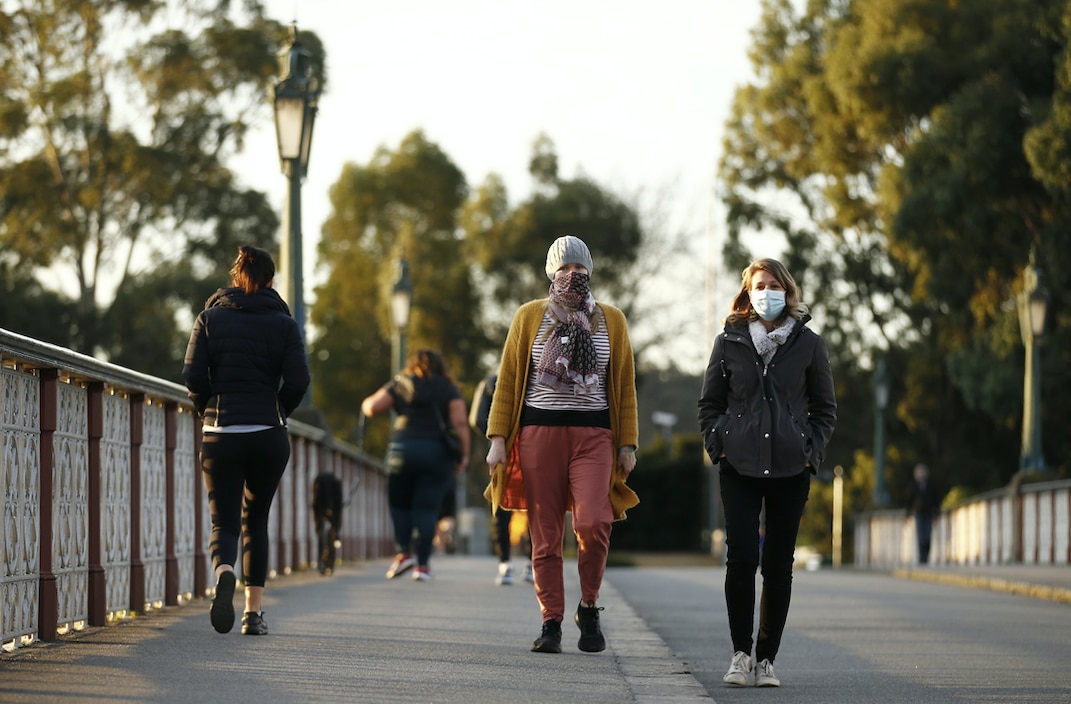 "We've got a Public Health and Wellbeing Act that is there for these kinds of circumstances ... These are the sorts of ways in which governments should be exercising their powers now at the time of a pandemic," he said.

"These requirements have been introduced to protect the community, as we know how infectious this disease is and how quickly it's spreading."

On Monday, Victoria recorded 532 new cases of COVID-19 and six more people died from the virus.

In one video that has gone viral, a woman at a Melbourne Bunnings store says being forced to wear a mask was a human rights violation.

Wait til this Karen finds out about 'no shoes, no shirt, no service'. pic.twitter.com/2dvLE90dOa

"Firstly - she's referring to the wrong thing. She mentioned 1948, when there was a document called the Universal Declaration of Human Rights that was created by the United Nations ... but that is not part of Australian law," he said.

"If you want to make a human rights argument - these people are themselves potentially acting contrary to human rights principles by putting people's health at risk." "What the government is doing - requiring people to wear masks - is to protect the health of the community and to contribute to us being able to enjoy our right to life and right to health," he said.

On Monday, the Human Rights Law Centre responded to anti-mask claims by calling them "misguided".

"Being required to wear a mask in public in Melbourne does not breach human rights. It's a very small limit on personal freedom for a very good reason; saving lives and protecting public health. There are sensible exceptions set out in the rules," executive director Hugh de Kretser said in a statement.

"Those who claim their rights are being breached are wrong."

Another common theme in videos released so far and discussion on social media is the idea that anti-maskers don't have to consent to what police say.

Anti-masker false "guidelines" shared online say people can simply say "I do not consent to this [$200 fine]".

But Associate Professor Liberman said "the law doesn't work on the basis that every person chooses which law they consent to and which they don't consent to".

And several anti-maskers have shared a quote that claims citizens are not required to answer police questions.

"It is an ancient principle of the common law that a person under arrest has no obligation to stop for police or answer their questions," it reads. But Associate Professor Beck hit back.

"Legislation overrides the common law and the legislation obliges people to provide their name and details to the police," he said.

Some anti-maskers in videos have threatened to sue businesses, such as Bunnings.

"People can say they don't like something, it doesn't mean they've got any legal claim … I don't know what kind of a lawsuit people would imagine they'd bring," Associate Professor Liberman said.

Shopping for essential items? Please be aware that some stores have set their own requirements for entry to help keep their staff and customers safe. A store is private property, not a public place.
For more restrictions info: https://t.co/CTpfySoZ6r#COVID19Vic @businessvic pic.twitter.com/oggwXmYpQ3

Associate Professor Beck said Bunnings had not breached any law by requiring customers to wear masks.

"The law of private property allows property owners to have people come into their premises subject to conditions," he said.

"You'll see signs on shops saying there are conditions of entry - like wearing shoes in a pub or no singlets allowed. Or in retail shops, there may be a condition to open your bag for inspection. That's just an ordinary aspect of the law of private property."

Associate Professor Beck said there was a common thread in what anti-maskers were saying.

"These people make these kinds of pseudo-legal arguments, usually to try and get out of parking fines or paying council rates or things like that." But Associate Professor Beck said as infections soar in Melbourne, these ideas can have dangerous consequences.

"These people are trying to encourage others to do things that put people's health at risk and that will ultimately lead to these restrictions being in place for a lot longer," he said.