While more than two million people in Australia are expected to watch Tuesday's race, a recent exposé on the mistreatment of retired racehorses has given anti-racing activists the fuel to spread their message further.

Once heralded “the race that stops a nation” and a quintessential part of Australian life, the country’s most prestigious horse race is being staged this year surrounded by heightened controversy.

At 3pm on the first Tuesday of November - a public holiday in Victoria - Australians will once again gather in their homes, offices, at the bookmakers and the tracks to watch 20 of the world’s best racehorses battle it out for $8 million in prize money.

A total of 2.65 million people across the country watched the race on TV last year, a similar audience to 2017, following a substantial drop in 2016.

But some Australians are turning away from the 158-year-old institution and saying “nup to the cup” this time around following a two-year investigation released last month into the treatment of discarded racehorses and a spate of horse deaths during previous cups. 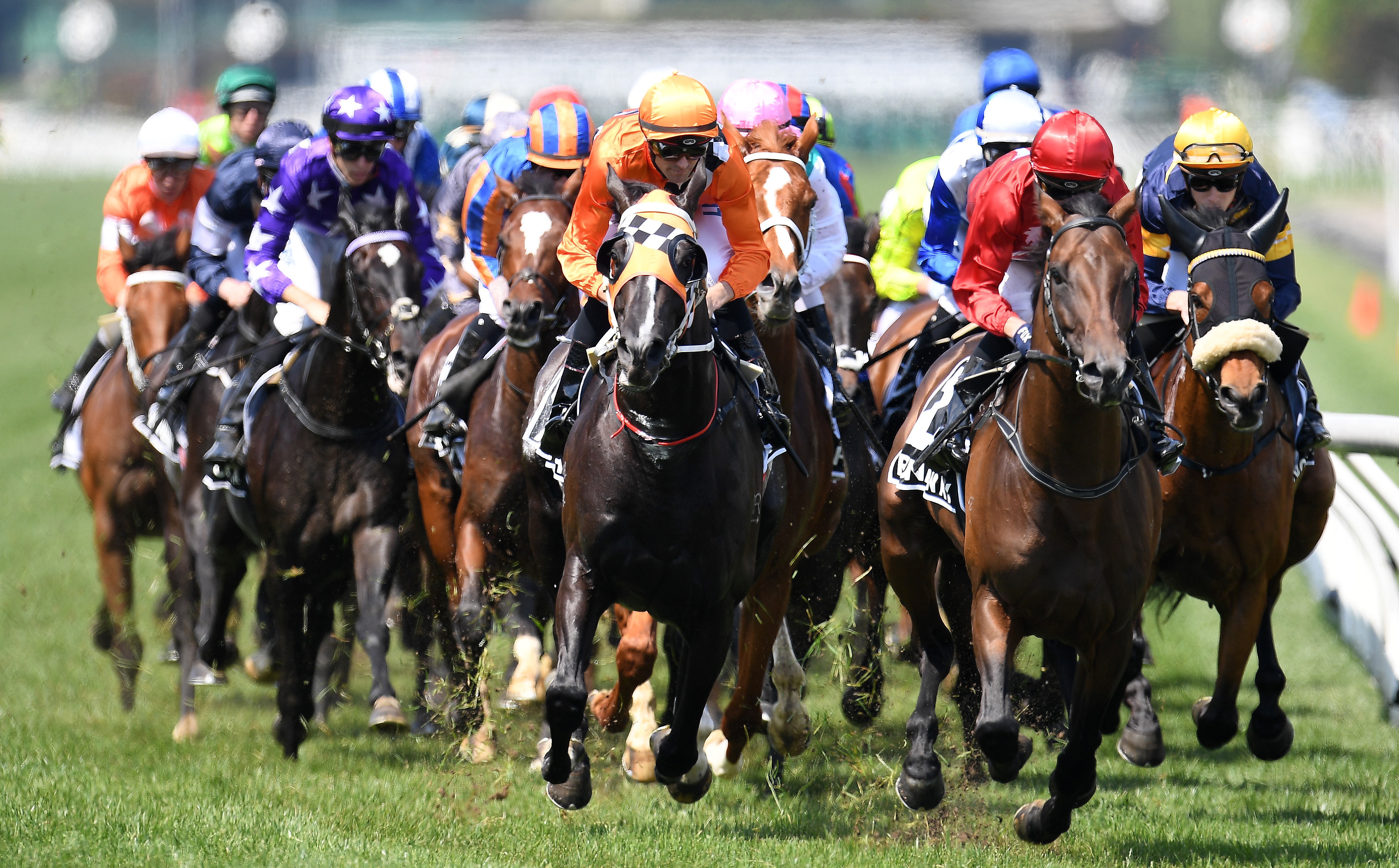 The Melbourne Cup at Flemington Racecourse in 2018.
AAP

Six racehorses have died as a result of the Melbourne Cup since 2013, a fact pushed by animal welfare groups encouraging punters to boycott the event.

In horseracing more broadly, the Coalition for the Protection of Racehorses found 122 horses had died on Australian tracks in one year. 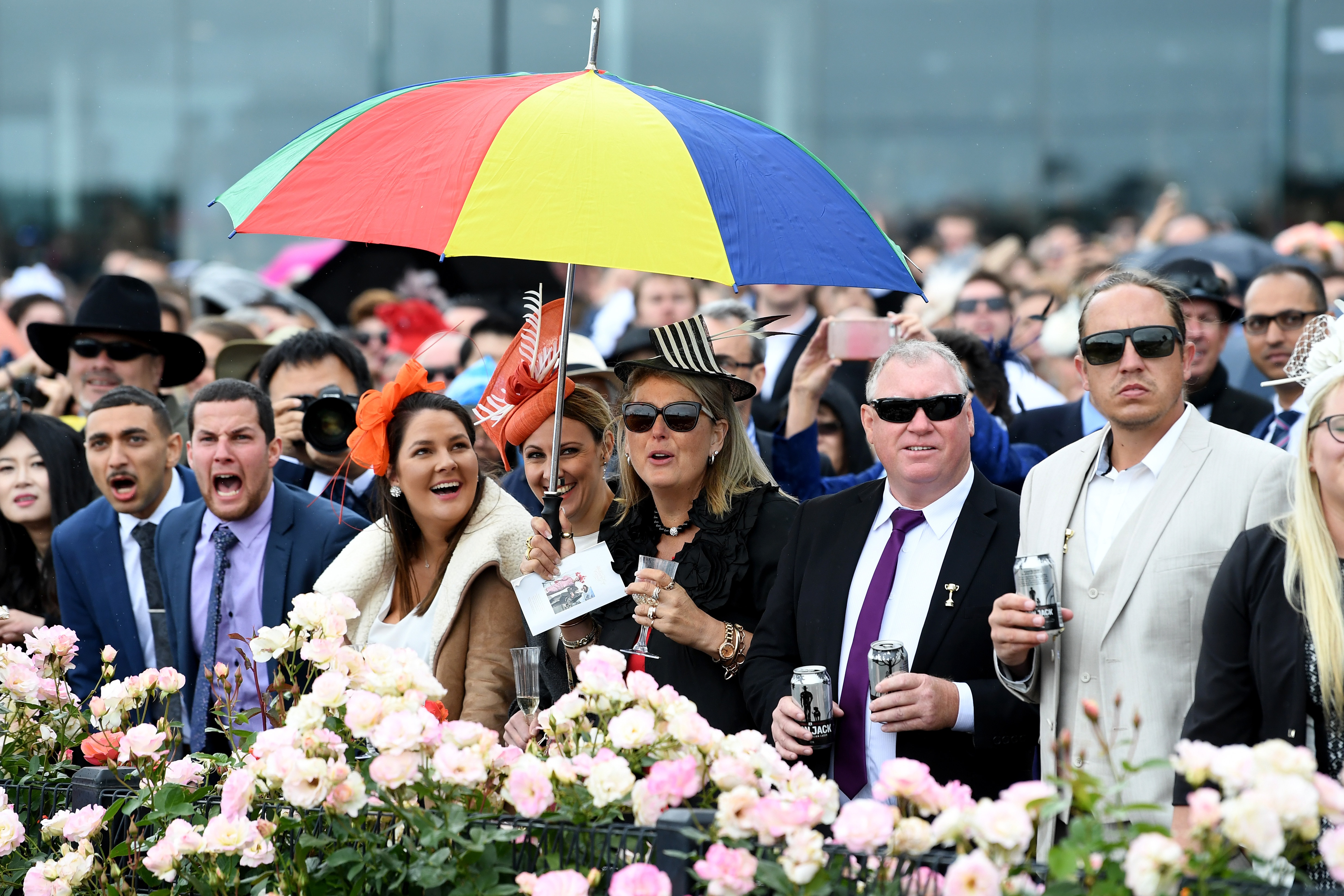 Racegoers at Flemington Racecourse in 2017.
AAP

The issue of cruelty towards racehorses was thrust into the public consciousness in October when the ABC’s 7.30 program revealed hundreds of registered racehorses, some which had earned hundreds of thousands of dollars in prize money, were being killed at slaughterhouses. 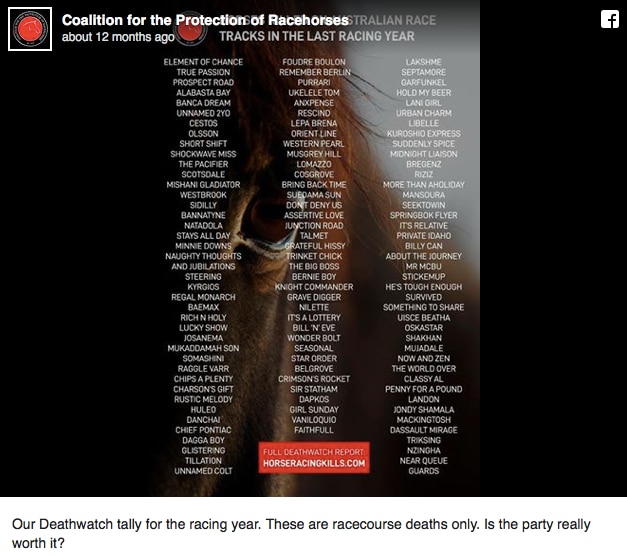 The investigation came weeks after US singer Taylor Swift dropped out of performing at the Melbourne Cup, citing “scheduling issues”, after a petition circulated by anti-horse racing activists called on her to “take a stand against animal abuse”.

Australian model Megan Gale, formerly a regular at the race, has also said she would not attend this year’s event due to concerns about animal cruelty. 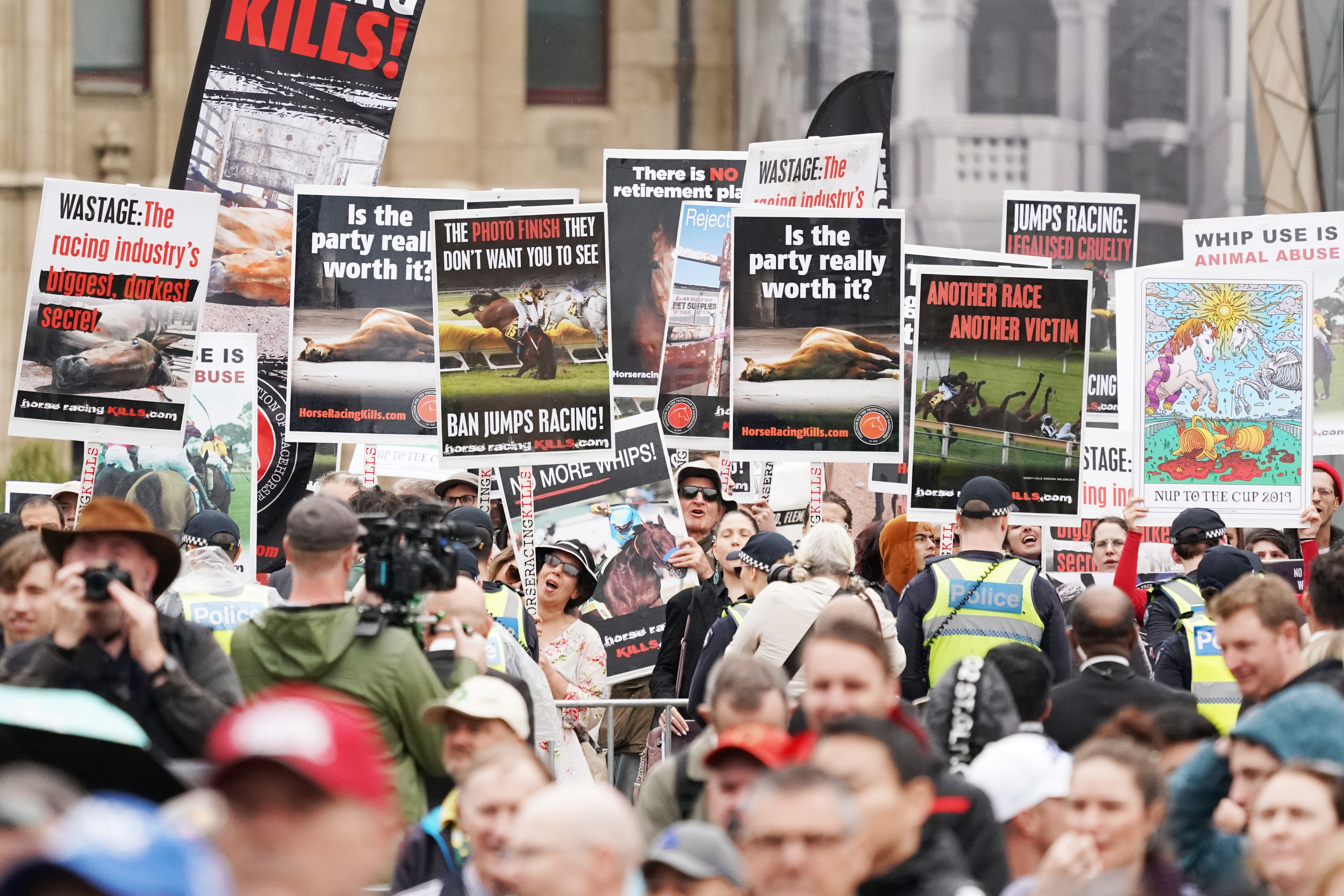 As jockeys, horses and entertainers made their way through the streets of Melbourne’s CBD to cheers from fans, others called for the race to be shut down.

“We want to see an end to horseracing. We've been watching this industry, investigating it, researching it for over 10 years and we've shown that it cannot be made kind for those horses,” Coalition for the Protection of Race Horses’ Kristin Leigh said.

But despite pressures to boycott the race, TAB told SBS News they were expecting more than three million people to place bets with them on Tuesday.

Over the eight days of the Spring Racing Carnival, the spokesperson said they are expecting to bring in close to $1 billion in turnover from betting.

Richard Waterhouse, emeritus professor of history at the University of Sydney, told SBS News that Australians have always been obsessed with horseracing, largely due to their desire to be seen as “respectable” by the British. 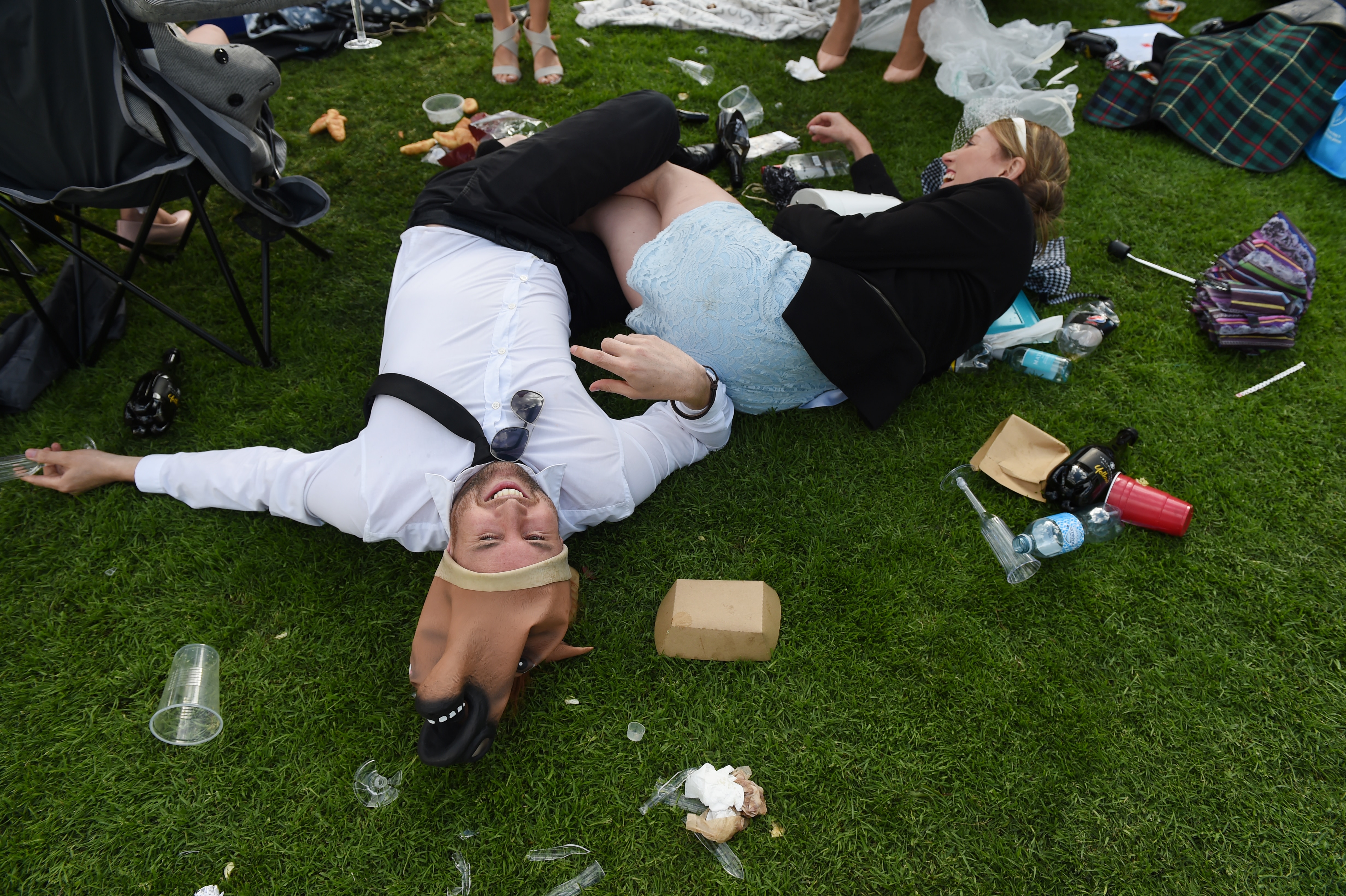 Revellers at the end of Derby Day, part of the Melbourne Cup festival, in 2014.
AAP

“People identified with the Melbourne Cup because they saw it as a uniquely Australian institution and it fitted into the notion of the fact that the little battler could always win.”

The future for 'the race that stops a nation'

Racing Australia chief executive Barry O'Farrell said earlier this month he was "shocked" and "appalled" by what was uncovered on the 7.30 investigation and said state racing chief executives "are doing everything they can just to ensure the sport of racing thrives and flourishes, but also that responsibility for equine welfare is as high as possible within their jurisdictions".

Investigations and prosecutions would occur where required, he told the ABC.

Minister for Better Regulation and Innovation Kevin Anderson said at the time: "There are tens of thousands of people employed in the racing industry and a report like that is deeply concerning. That's why I'm taking it seriously". 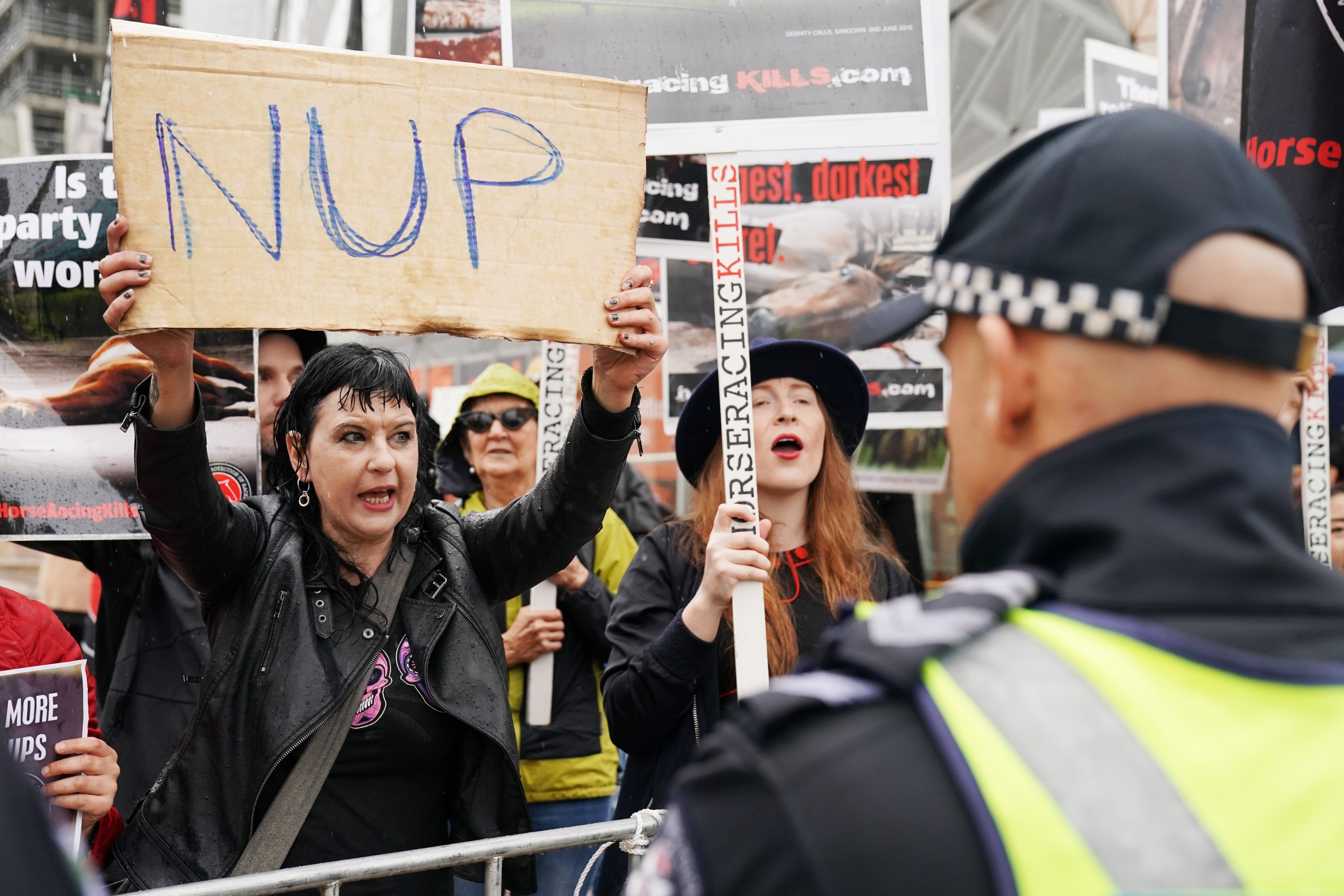 Anti-horseracing activists are calling on Australia to say "nup to the cup".
AAP

Professor Waterhouse believes the backlash against the cup is about more than concern for the horses.

“The younger generation sees horseracing as being a very old fashioned and very slow activity,” he said.

“You go to a race meeting, there's a race every 35 minutes, it's over in a minute, that's really pretty boring, isn't it?” 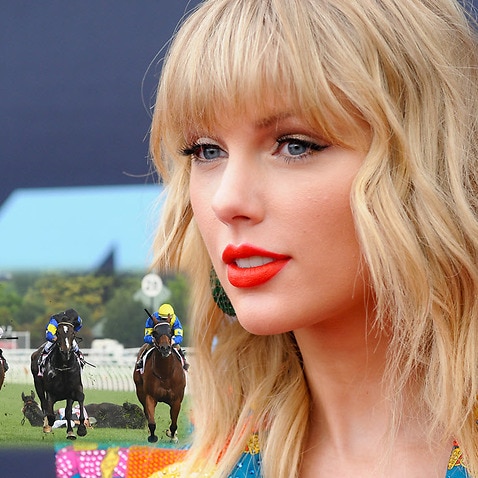 The increasing commercialisation of the event and expanding international influence has also turned punters away, Professor Waterhouse said.

“It’s become very detached from the roots of Australian culture,” he said.

Professor Waterhouse believes the 7.30 exposé and increasing public awareness of how animals are treated will have long term implications for the sport but said the event is not going to be cancelled overnight.

“What will happen is that the Melbourne Cup will just gradually lose its significance,” he said.

“Part of it will be that they [younger generations] will find it distasteful because it's inhumane, but partly they’ll just be bored by it.” 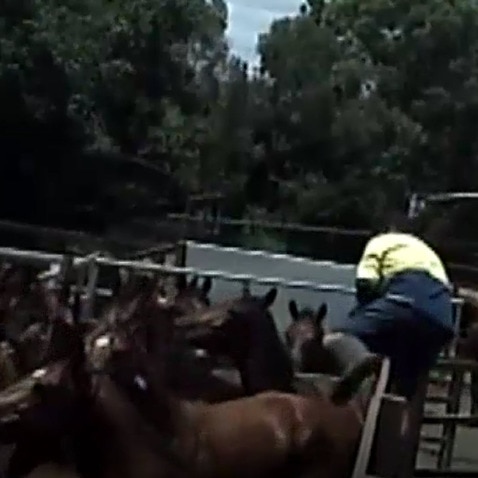 Former Australian Idol contestant Anthony Callea has said he will be performing the national anthem on the day but pledged to donate his performance fee to an equine welfare organisation.

“I believe that we all should have a better awareness and support a movement in the industry towards positive change and ensuring that this appalling behaviour is eradicated,” the singer wrote in an Instagram post following the 7.30 report.

But Ms Leigh of the Coalition for the Protection of Race Horses had some stronger words for those planning to attend the cup.

"If you're going to the races this year and you saw 7.30, you are complicit in that animal abuse,” she said.