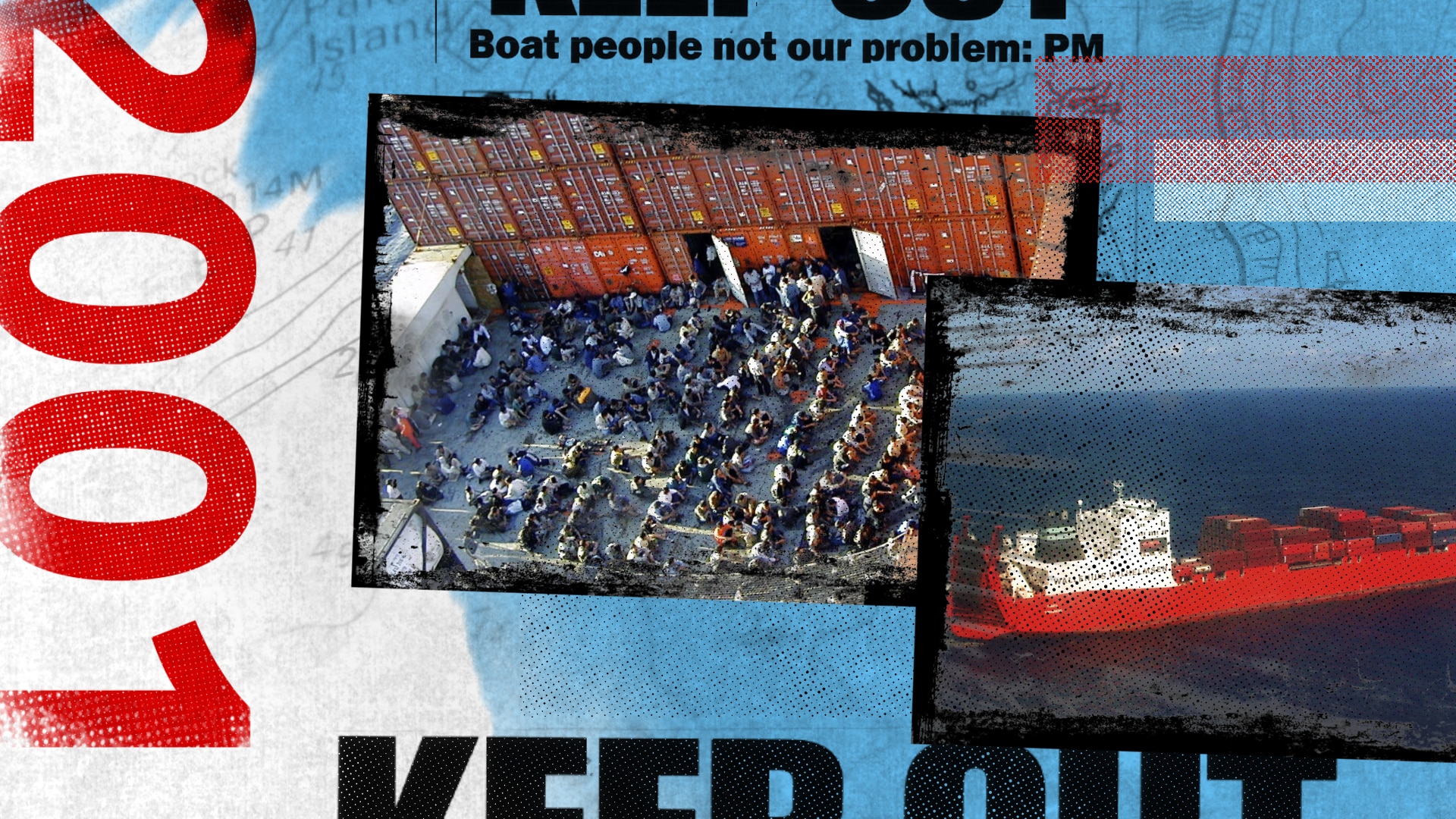 The Tampa affair, 20 years on: The boat that rocked Australia's asylum seeker policy

It’s been two decades since a dramatic incident at sea saw the lives of more than 400 people saved and Australia’s stance on asylum seekers changed irrevocably. This is what happened.

The Tampa affair, as it became known, was an incident at sea in 2001 which changed Australia's policy toward asylum seekers. At the time, increasing numbers of people attempted to travel to Australia by boat to seek asylum.

A boat in distress

On 24 August 2001, a small wooden fishing boat, the Palapa 1, began to sink about 140 kilometres north of Christmas Island, off the far north coast of Western Australia, in what is considered international waters.

Even though the boat was small, it was carrying 438 mainly Hazara asylum seekers from Afghanistan. At the time, Hazaras were fleeing Afghanistan fearing persecution from the resurgent Taliban.

The boat alongside the Tampa. Source: AAP/Wallenius Wilhelmsen

On 26 August, Australia's Rescue Coordination Centre sent a message to all ships in the vicinity of the sinking Palapa 1 saying a 35-metre Indonesian-type vessel with the words HELP and SOS written on the roof was adrift.

A ship to the rescue

The closest ship to it was the Norwegian Tanker, MV Tampa, and its captain, Arne Rinnan, agreed to give assistance to the stricken boat, as was the customary law of the sea.

The Tampa reached the sinking fishing boat, guided by an Australian Coastwatch aircraft.

In an interview about the incident, Captain Rinnan said: "When we arrived, several of the refugees were obviously in a bad state and 10 to 12 of them were unconscious, several had dysentery and a pregnant woman was suffering abdominal pains".

After Captain Rinnan and his crew had rescued all on board, he received a call from Jakarta advising him to take them to the ferry port of Merak, Indonesia. But five of the asylum seekers visited the captain's bridge, demanding they were taken to Australia, specifically Christmas Island.

Fearing the asylum seekers might jump overboard or riot, Captain Rinnan agreed to alter course and head for Christmas Island. But the Australian government refused permission for the ship to enter Australia's territorial waters and threatened to prosecute Captain Arne Rinnan as a people smuggler if it did so.

As the ship prepared to cross into Australian territory, Captain Rinnan pleaded for permission to dock at Christmas Island, saying several of the asylum seekers were unconscious, and others were suffering from dysentery.

Some of the asylum seekers onboard the Tampa. Source: AAP/Wallenius Wilhelmsen

The Australian government provided medical assistance and food, but the stand-off continued. Prime Minister John Howard vowed that none of the asylum seekers would be allowed to set foot on Australian soil.

On 29 August, Captain Rinnan lost patience with Australian authorities, declared a state of emergency, and proceeded to enter Australian territorial waters without permission.

The ship crossed the Australian maritime boundary and Australian authorities advised Rinnan that he was in “flagrant breach” of the law. The Australian government dispatched 45 Special Air Service (SAS) troops to board the ship and prevent it from sailing any closer to Christmas Island.

In just days, the government passed a series of laws known as the 'Pacific Solution' which meant asylum seekers arriving by boat could be processed offshore.

Mr Howard said at the time: "I believe it is in Australia's national interest that we draw a line on what is becoming an uncontrollable number of illegal arrivals in this country".

By 1 September the government had secured agreements for the Tampa asylum seekers to be taken to New Zealand and Nauru to have their claims for refugee status processed.

While 150 were sent to New Zealand, the rest remained on Nauru, some for up to three years.

Australia’s handling of the Tampa affair and the implementation of the Pacific Solution attracted international criticism, which continues today. A 2018 article in The New York Times described the incident as “a lesson in how the dehumanisation of immigrant families can be an effective political strategy”.

But the government of the time defended the implementation of its immigration policy saying it was saving lives by discouraging people from setting sail for Australia in unseaworthy boats.

Just five weeks after the Tampa crisis, another wooden boat carrying 223 asylum-seekers sank off Christmas Island. It was intercepted by the HMAS Adelaide on 7 October and the immigration minister at the time Phillip Ruddock claimed passengers on board had thrown their children overboard as part of a ploy to be rescued.

Even though a Senate inquiry into the incident found no children were at risk, the government's handling of the so-called incident, and of the Tampa affair, worked in its favour, with the Liberal-National Coalition gaining in popularity in opinion polls in the lead-up to a federal election.

People being rescued by the HMAS Adelaide. Source: Department of Defence

Mr Howard's government campaigned on tough border protection policies and national security, particularly in the wake of the 11 September terror attacks in New York which followed only weeks after the Tampa affair.

During the campaign, Mr Howard said: "We will decide who comes to this country and the circumstances in which they come".

The Labor opposition leader at the time, Kim Beazley, accused the Howard Government of wedge politics by using asylum seekers as an issue to divide the electorate by polarising public opinion along racial lines.

Border protection was also part of Labor's election campaign. Mr Beazley pledged to introduce "a proper coast guard", saying the country needed “a cop on the beat 52 weeks of the year”. Australia and its neighbours needed to work together to send the boats back or stop them before they leave, he said.

In November 2001, the Liberal-National Party was re-elected with an increased majority, despite having lagged behind the Labor opposition in opinion polls in the months preceding the Tampa crisis.

Human rights lawyer Julian Burnside, along with several others, criticised the Australian government's handling of the Tampa crisis, saying it was a triumph of electoral cynicism over humanitarian need.

Captain Rinnan reunited with some of those he rescued in 2006. Source: Ross Land/Getty Images

The policy of boat turn-backs and offshore processing, implemented in the wake of the Tampa crisis, has remained a feature of conservative politics since.

In May 2002, Captain Rinnan and his crew were presented with the Nansen Refugee Award, a human rights honour "for their personal courage and unique commitment to refugee protection" for rescuing the 438 asylum seekers.